Shortly after getting married I had to pack up and move 2 hours south. While my wife is attending Mississippi State University we figured it would be easier for us to get a place there in Starkville until she graduates. Long story short; I am maintenance at an apartment complex and use a vacant 3 bedroom apartment as my shop. It has worked out well. This unit started out as storage when I came into the picture. It was full of scrap lumber, sinks, doors, and anything else maintenance related. After cleaning it out for the better part of a Sunday I was left with a clean slate to start the new shop. My wife was delighted to get all my tools out of the spare room in our apartment. 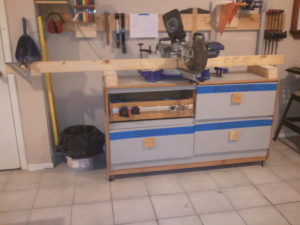 Like my old shop, I found a junk dresser and started using it as a miter saw station. The sliding miter saw in this pic was a birthday gift from my wife. She sure does know the way to a mans heart ;) 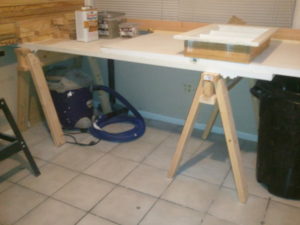 I didn’t have a workbench for the longest time. As a temporary fix I used some of the junk doors that were in the apartment as a work surface over a pair of sawhorses. 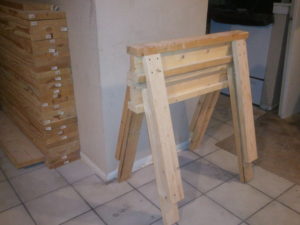 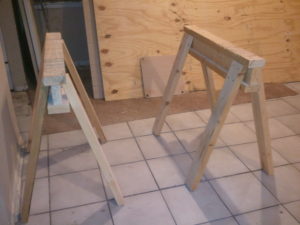 Speaking of sawhorses. These are my favorite…by far. Super quick to make. Super strong. And they stack as high as you want. This is great for smaller spaces as they only take up one footprint. 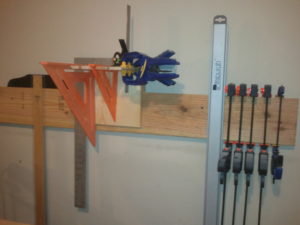 I wanted some way to have removable and rearrangeable wall storage so I chose a French cleat method. I happened to have a 2×8 laying around so I just ripped a 45° angle on one side and screwed it to the wall. I like this method over others. The 2×8 is secured to the wall with three 3″ decking screws into wall studs. I believe this is ample strength for the relative light weight of how I was using it. This also only put three holes in the wall as apposed to several for multiple individual storage racks. 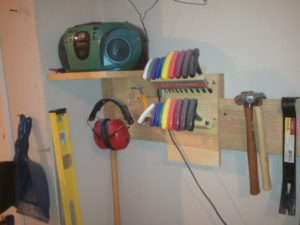 I bought a $50 Mastercraft table saw on Craigslist that lasted only 3 months. Not because it died on me, but because I upgraded. I stumbled upon a few paying projects back to back that resulted in a nice chunk of profit. New table saw time!!! 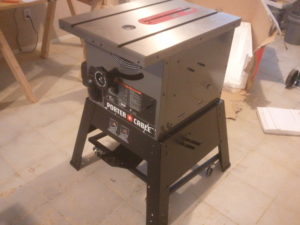 If you look closely the Mastercraft saw is behind the new Porter-Cable saw. BIG difference. 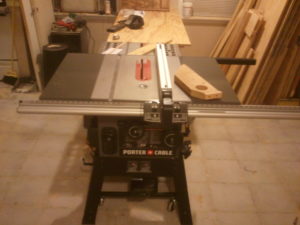 A crosscut sled is a very handy jig for any table saw. I immediately made one after setting up the saw. 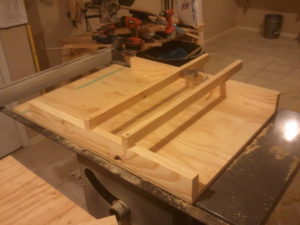 After my original investment, all shop tools and projects are funded by other paying projects. I do not like to mix “shop money” and “household money”. This system has been rewarding. About a month after the table saw sled I made enough to buy a bench top planer. With the helpful folks on the LumberJocks forums I decide to get the Dewalt DW735. 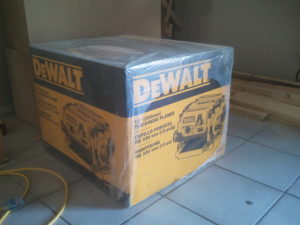 Talk about a beast of a planer. This think is awesome. It has a fan driven chip ejection that almost works to well. Without dust collection hooked up it will cover a large area of the shop with chips in very little time. 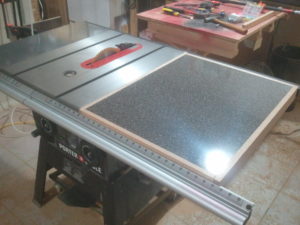 Shortly after buying the new saw I decided to make an extension wing for it. This was another rewarding shop project. It more than doubles the surface area over the stock wing. 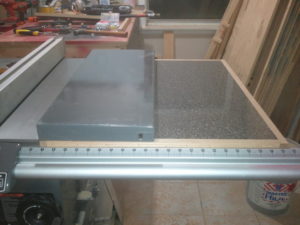 It seems as if my shop changes on a weekly basis. I am a firm believer in “continuous improvement”. I also do not like things that stay the same. There have been many shop improvements recently that I will document in the future. In the mean time you can check out these videos.