Not everything works out as planned. Recently I’ve made a couple projects that left me scratching my head as to “why did I do it this way?” A couple weeks ago I made a modified version of the Paulk Workbench in which I made a couple decisions that ended up not working out.

If you aren’t familiar with the Paulk Workbench I recommend that you check it out. It’s a workbench designed with engineering instead of mass for people who are either working on site or who need to break down shop for one reason or another. I bought the plans, slightly changed a few things, and made my own version. But I should have done a few things differently from the start.

The original design calls for two tops that are bolted together. This allows the structure to be easily broken down and stored away. Because my version will never leave my driveway I have no clue why I went ahead with the two top design. I should have made it a solid one piece top to begin with. I also didn’t want to drill all the holes in the top. I thought they might have been a problem with things falling down in them. So instead of drilling the holes I secured the tops in a split-top orientation with a gap down the middle. This was intended to be used for clamping material in the center of the table but ended up being a pain in the rear. In the week or so time I used the workbench I quickly grew frustrated with items falling in the gap.

So to correct the problems that I created I removed the bottom panels from both top structures. I’ll use these panels in future shop projects. 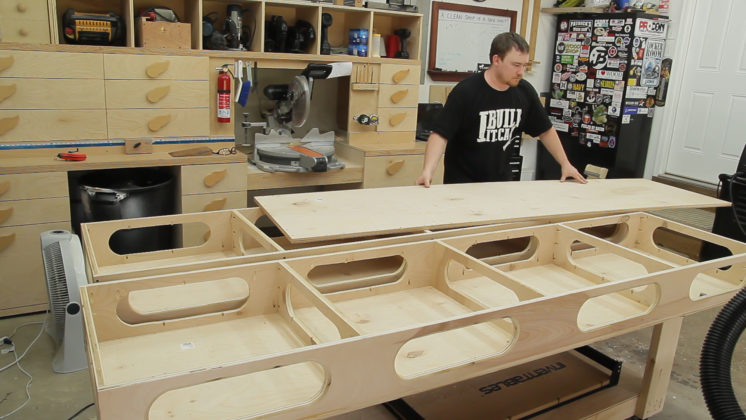 For whatever reason I didn’t glue the bottom panels. Which worked out great for me as I could remove them. I replaced the two panels with a solid 4×8 sheet of 1/2” plywood. As usual I used Purebond hardwood plywood for this. It’s made in the USA and formaldehyde free. Both of which I really like. I screwed the top sections together in the middle to form a single top assembly before adding this top sheet. When predrilling I used a scrap board as a random spacing to keep all of the screw holes looking even. The board was actually a left over shingle from my dog house build. 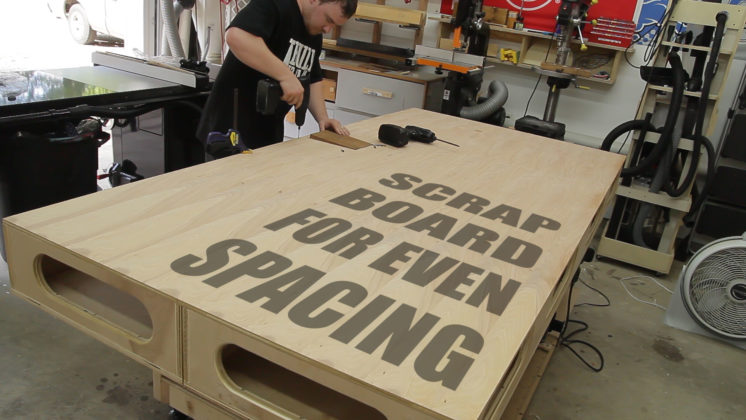 I used 1-1/4” drywall screws to secure the top panel. I also used a chalk line to make sure I was going into the dividers and not into dead space. 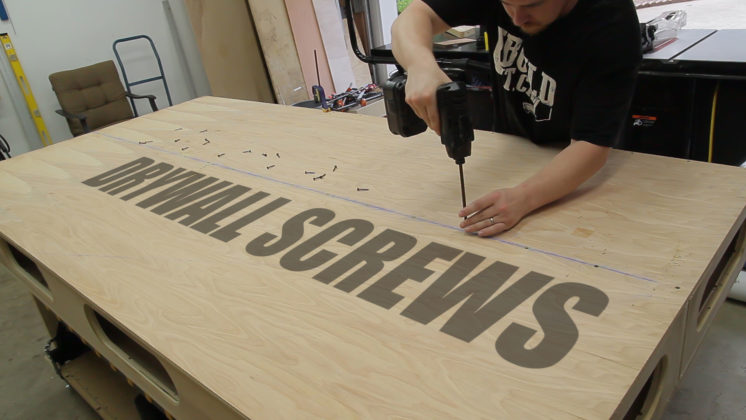 With two of us working on it the process went pretty quick. The entire perimeter as well as all of the interior dividers received screws. 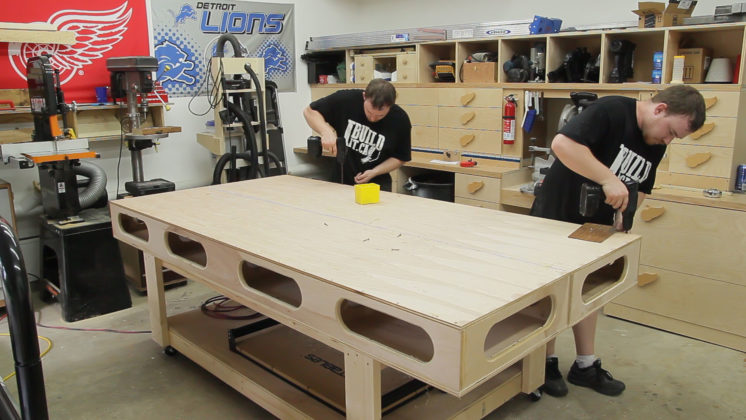 Ron’s original design uses 3/4” holes which work great with Festool clamps. I looked up the price of the clamps and realized I didn’t want to pay $40 per working clamp for this bench. So instead I found a video on YouTube that shows how to modify an inexpensive Harbor Freight clamp to be used in 3/4” holes. The only problem is that it would require me to cut down the length of the bar to about 7” to be inserted from below on the workbench. This would result in about 3-1/4” of clamping depth on top. I wanted a little more than that because I use dimensional lumber a lot so instead of modifying the small end of the bar clamp I ground off the retaining pin holding the top arm in place which made the top arm removable. 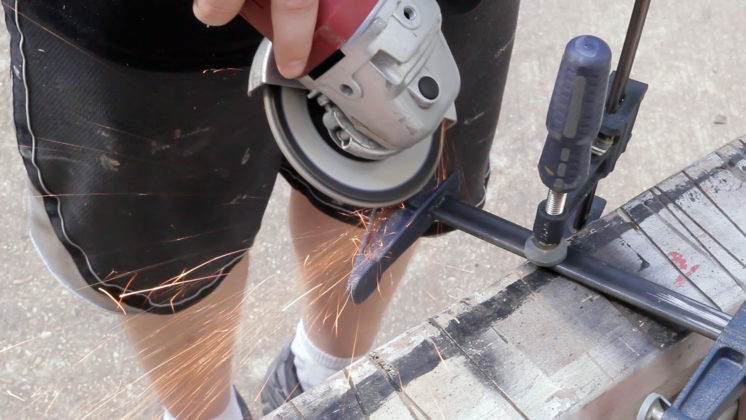 A few taps with a hammer and a punch and the retaining pin is released. To hold the top arm in place a nail can be used. 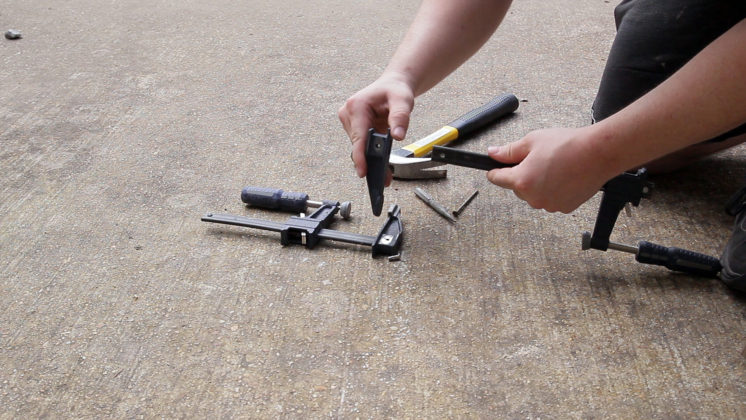 With a few clamps successfully modified a fun drilling session could begin. I believe there are 220 holes drilled in the top of the bench. Again, I used a chalk line to establish where to drill. 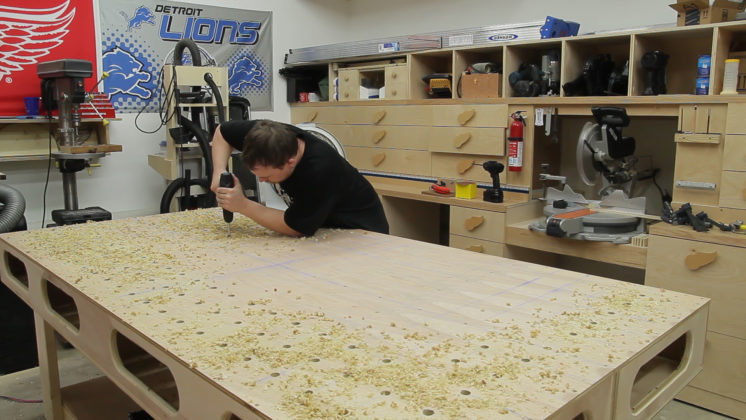 Because I can visually see into each hole on the table I can line up the bar slot in the arm from below, insert the bar from above, and insert the locking pin (a nail). It’s not difficult at all. 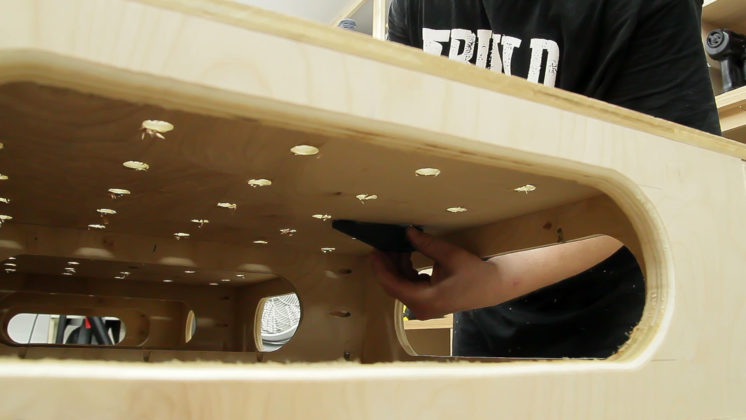 Here you can see the clamp from below as the nail is in place. 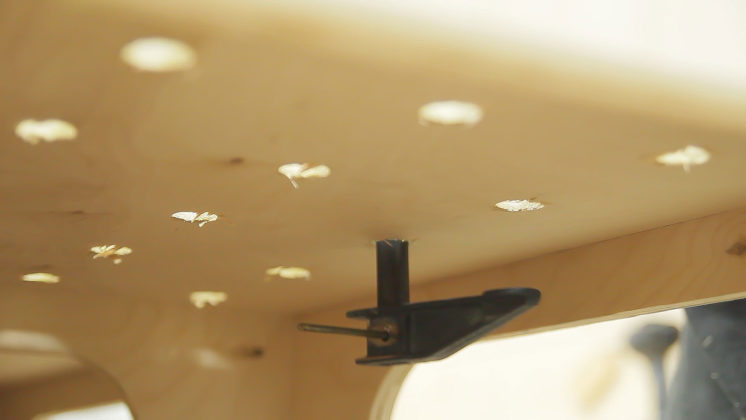 I drilled the holes a week after completing the bench the first time and sprayed a polyurethane finish on the top a couple days after that. So, for all of those who told me I should have drilled the holes in the first place go ahead and say I told you so. This is really a useful workbench but it definitely has some spring to it when pounding on top with a chisel or something of that nature though. I’m not sure if I can call it the perfect workbench for woodworking but it definitely is a very useful table setup for me. I’m still thinking about pursuing a heavy woodworkers workbench but I can’t ever decide on the build vs buy decision. 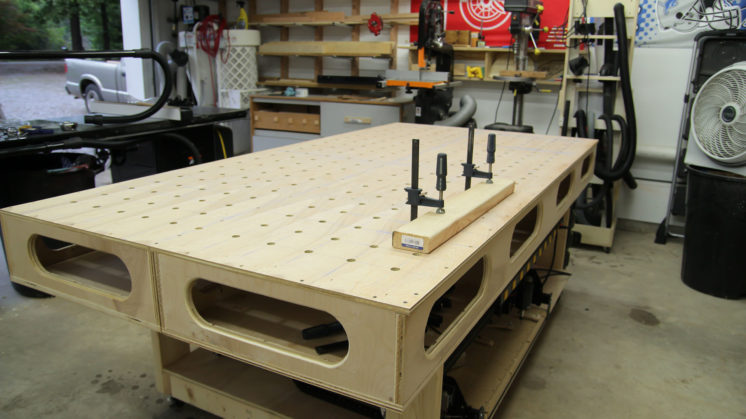 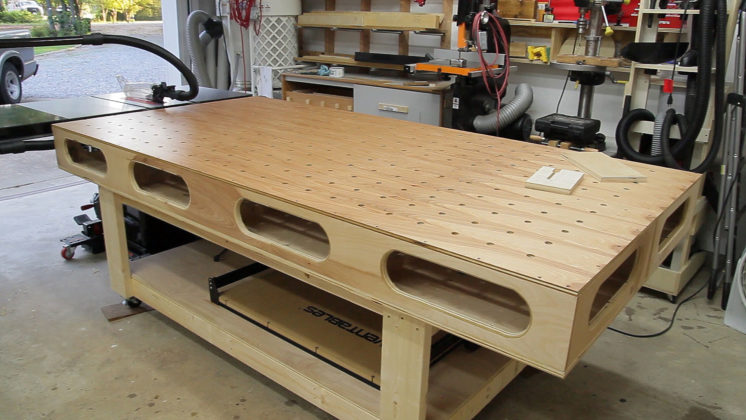