Just two more shop projects that I want to knock out before starting in on a bookcase for my wife. The first one is a clamp rack for the pile of unorganized clamps that I have been neglecting for way too long. After this (hopefully) will be a rolling plywood cart to fix my plywood rack mistake project.

Like many of you out there I don’t have a complete set of one style clamp. I’ve got a random clamp collection. Even numbers of this, even numbers of that, and a few of those thrown in. When shooting the video for the project I originally designed a holder that would work with 5 clamp styles. Now that it’s completed I can say that this one design works with every one of my clamps which turns out to be 10 different clamp profiles. 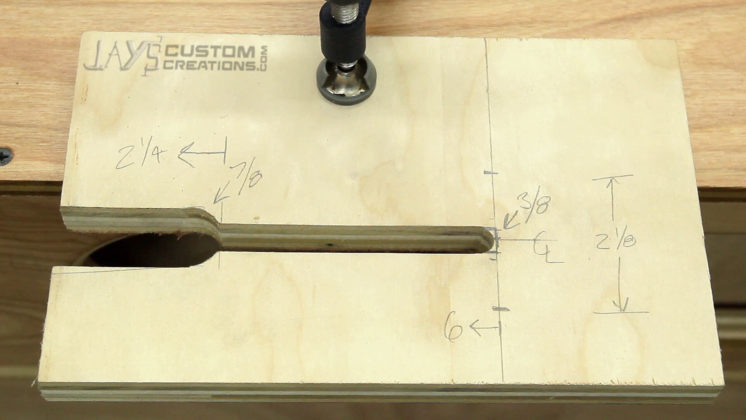 I didn’t want to spend any money on this build as I have a lot of left over materials from other projects in the shop. All of the holder material was cut from the 3/4” plywood top that was on my previous work table. I really don’t care how ugly this thing turns out. 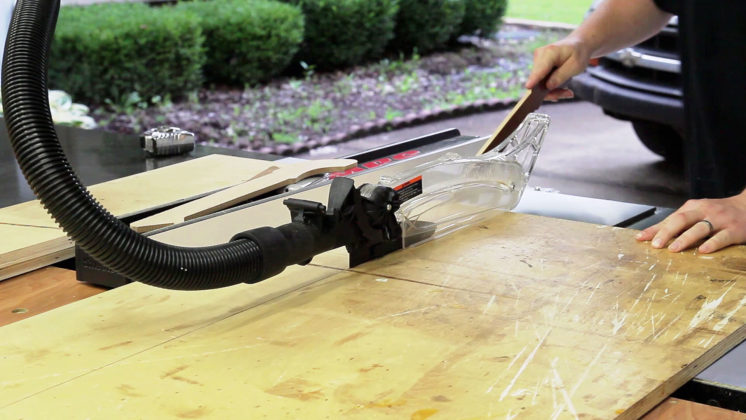 There will be four (five initially) rows for clamp storage but there is no need to mark every piece of plywood. Find the center points for the holes to establish the slots on one board and use it as a template for the rest of the pieces. 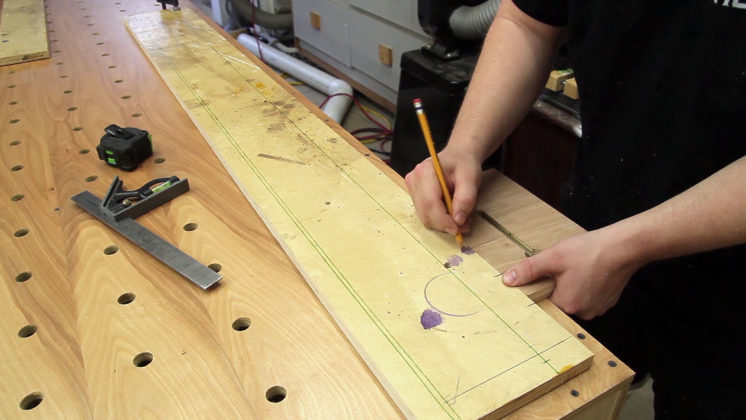 After clamping the multiple plywood strips together my intention was to use the drill press for the multiple holes. This didn’t work out as planned though. My drill press chuck kept falling out on the return stroke once the hole reached max depth. It wasn’t because of all of the chips as after hole #1 I made sure to clear the chips every so often. I believe the problem was that I had so much material cantilevered to one side of the drill press causing the drill to bind slightly and grab the bit on the return stroke. Regardless, I was frustrated so I shut down the shop for the night. 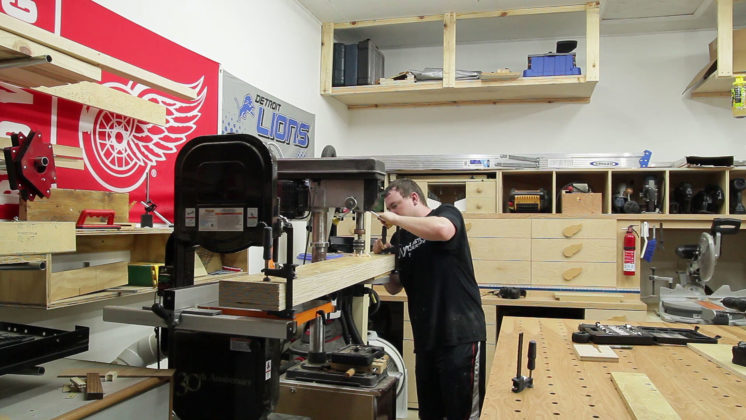 And the next morning I completed the holes with a hand held drill. It wasn’t that bad of a process. Just time consuming. 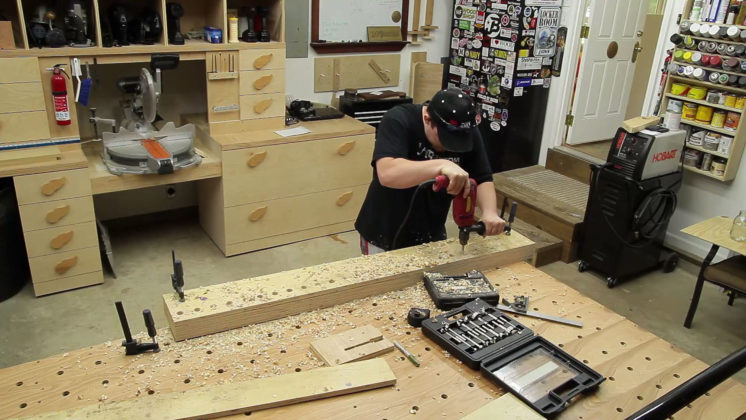 All of the previous holes were with a 7/8” forstner bit. For the longer more narrow slot I used a 3/8” bit. This bit was an electricians bit with an auger tip that really made the process much faster. The cuts weren’t as clean but who cares, it’s just a clamp rack. 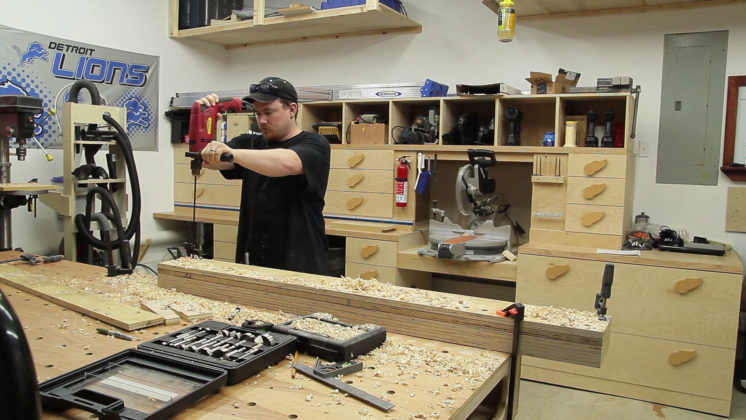 To establish the sides of the slot I positioned my miter saw with the depth stop and a lock on the sliding arm so that I would only cut half way through the 7/8” hole. It was just up to me to make sure the kerf of the saw lined up with the edge of the hole. 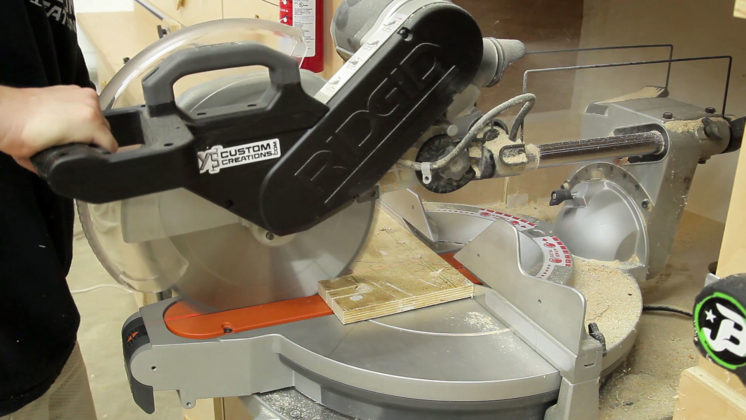 Due to the radius of the miter saw blade I couldn’t completely cut through the entire thickness of the plywood at the end of the cut. To clean up the slots and remove the slot material I finished the cuts with a jigsaw. 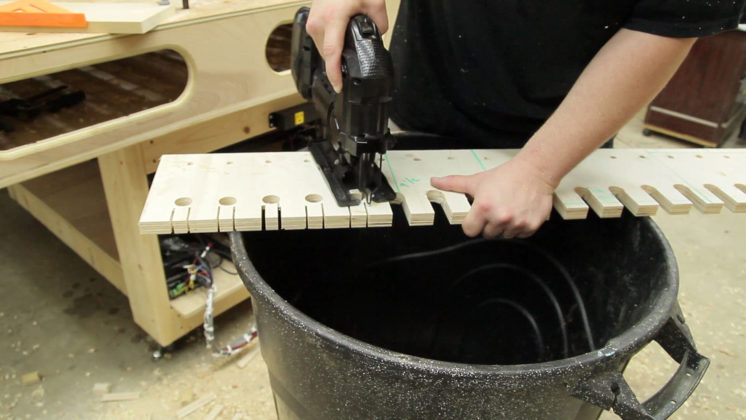 The longer slots were cut the same way but it took a little more effort to get everything lined up at first. This is one of the few times that a laser on a miter saw is beneficial. 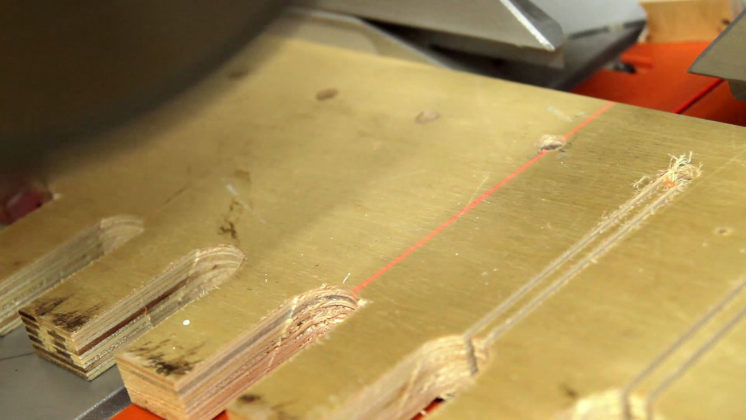 And of course the longer slots are cleaned up the same way. But this time I cut into the hole as opposed to out of the hole like before. 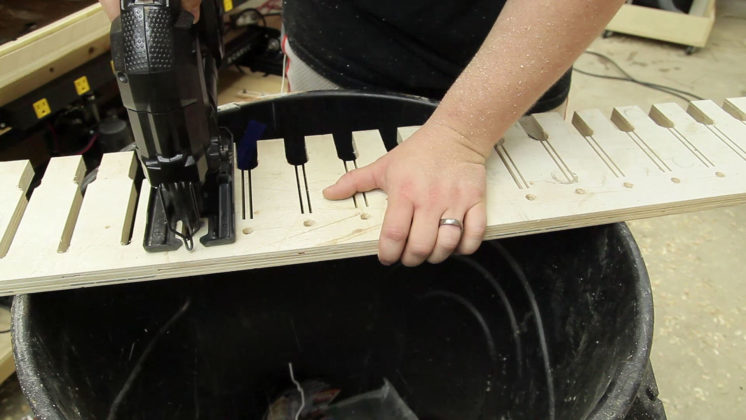 I really didn’t want to spend much time with joinery on this project. Just simple butt joints will be fine. I secured the plywood pieces to some pine 1×4 furring strips to form an L shape. After completing this step I realized that five rows of these pieces would be too much so I eliminated one completely. 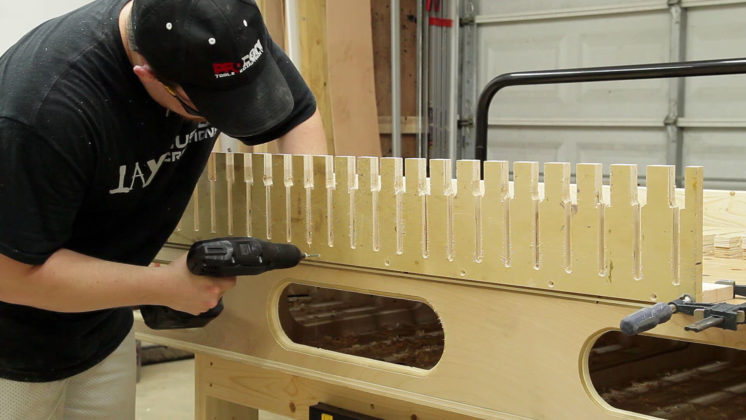 Me and Myself are back again so I put them to work. I flipped the assemblies over starting with the top and bottom and used another scrap strip of plywood to secure them together. No glue in this entire project by the way. Just four drywall screws at each connection. I used three vertical strips of plywood to connect everything. 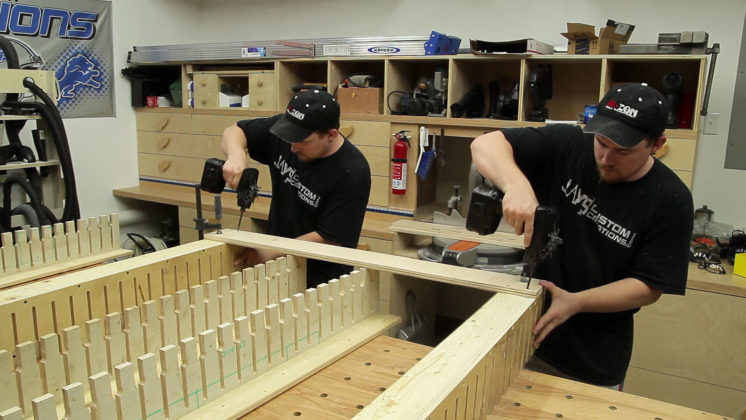 To hang it on the wall I used a french cleat. I already had a french cleat on the wall so I just needed to cut one for the back of the rack. If you are not familiar with a French cleat it is nothing more than two pieces of material (typically 3/4” thick) with a matching angle cut on each one. One piece is secured to the wall with the angled edge facing up and sticking out to act as a hook on the wall. The opposite piece is attached to whatever it is you are trying to hang with the angled edge facing down and out. Then whatever it is you are trying to hang can easily be lifted up and hooked onto the piece on the wall. 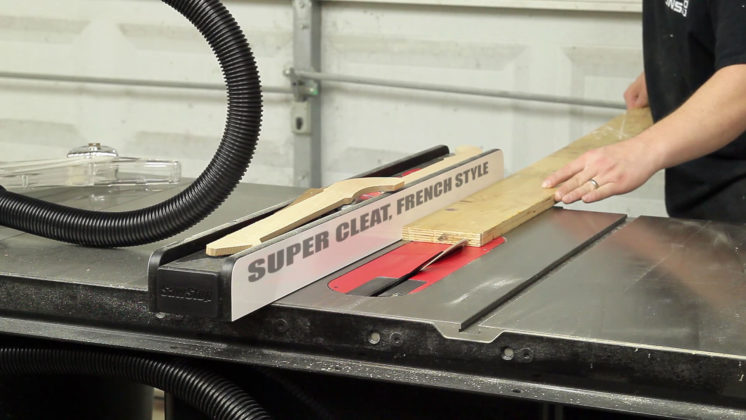 I screwed the cleat onto the back of the rack and I also added a scrap piece of material to the back side of the bottom clamp row to keep the entire unit evenly spaced off the wall. Then it’s time to hang it and fill it up. Here’s where I realized I had more clamps than what I initially though. But even then I still didn’t fill it up. Some of the larger clamps in this orientation are using multiple clamp locations but that’s OK as I don’t have the immediate need for those slots at the moment. If the need arises I can always move the longer clamps down exposing open slots for more clamps. I hope you enjoyed this build and are able to put the design to use regardless of how large or small you make it. Have a great week folks. 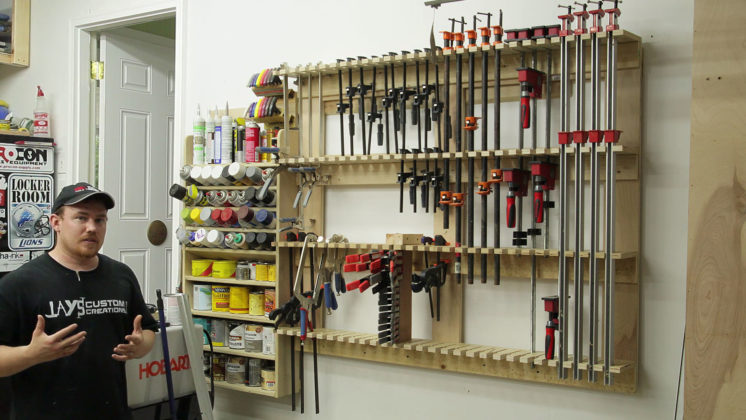