When we work by ourselves we often see things one way. We all develop a certain value for this or that and place a lower priority on doing this or that. So bringing in an outside perspective will often times shine light on simple areas for improvement that you may not have thought about. This is a perfect example of that.

I recently built a solid woodworking workbench that had several glue-up stages. Most of which resulted in a massive amount of glue squeeze out spilling all over my assembly table. The simple solution? Put paper down before you glue. I’ve seen it done hundreds of times on other assembly tables but never took the notion to implement it on mine. Not until friend Nick Ferry came over and made me realize how crazy simple and quick a paper roll holder would be to make. 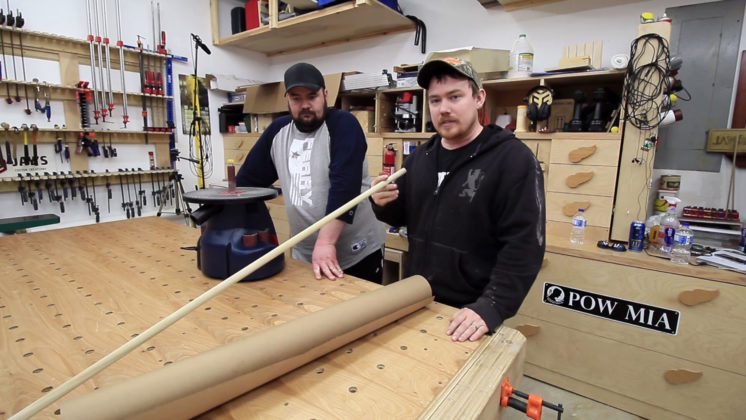 I had a scrap block of plywood that was perfect for this. I believe it was 62” long and all we needed was one 6” wide strip. In the video I said we were using 1/2” plywood but I was mistaken. The piece that I measured and Nick cut was actually 3/4” plywood. Either way, 1/2” plywood would work fine. The plywood I’m using is PureBond hardwood plywoood from Home Depot. It’s my go-to plywood because I’ve had great results with it staying flat in my shop, it’s made in the USA, and it’s formaldehyde free. 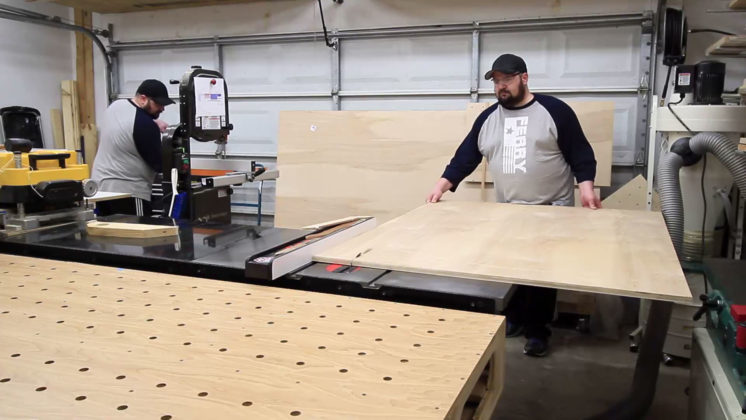 The single 6” wide strip needed to be cut into three parts. A 37” piece for the top and two 9” pieces for the sides. I made these cuts at my miter saw station. 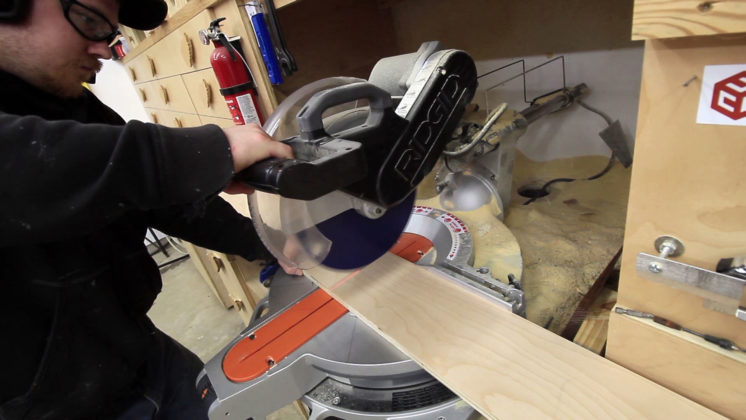 Each side piece needs a 1” hole cut for the dowel to rest in while holding the roll of paper. A slightly larger hole, such as 1-1/8”, would actually be a little bit better for this. 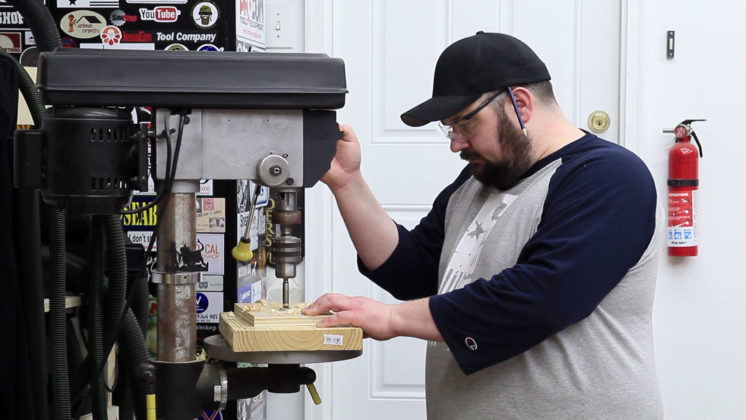 Whatever direction ends up being forward, the opposite direction is where the loading slot should be. As you can see the slot should connect with the top of the dowel hole and should be 1/8” up from what will be the bottom of the hole. This way when the dowel is inserted it will stay in what will be a slight divot formed by the bottom of the hole rather than rolling back and falling out of the slot. 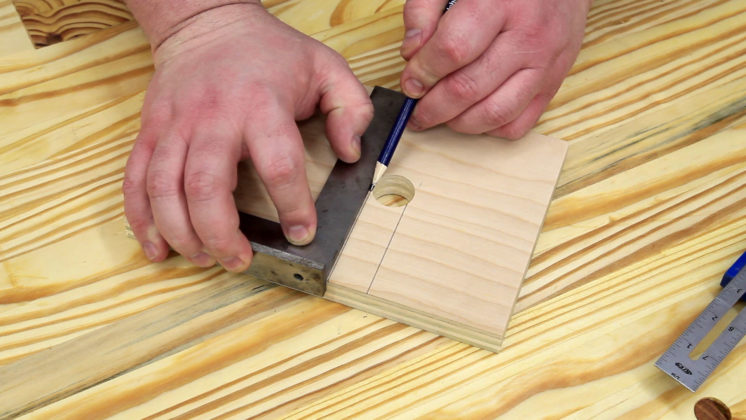 The slot was easily cut at the bandsaw. We also made the bottom of the bracket have a full radius on it. 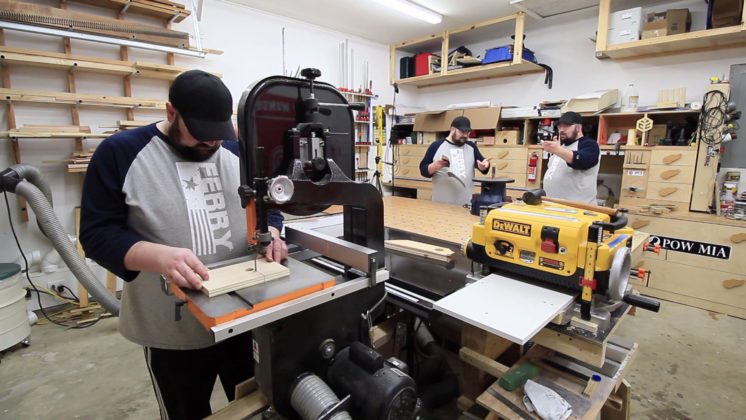 Nick also talked me into getting a budget osculating spindle sander. So far I liked it and it really came in handy on this project. It really made quick work of cleaning up the bandsaw edges. 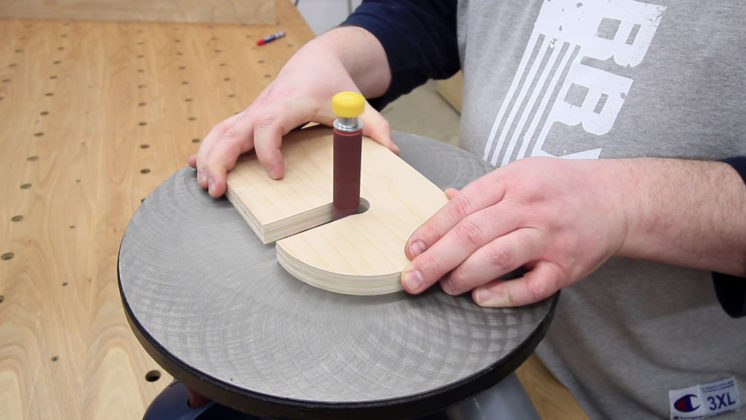 As I’ve said previously, joinery is like underwear, plenty of options so just choose the one that fits you the best. I recently made a really nifty box joint jig so knocking out precise box joints was as simple as putting the box joint jig on the table. I really like this thing. 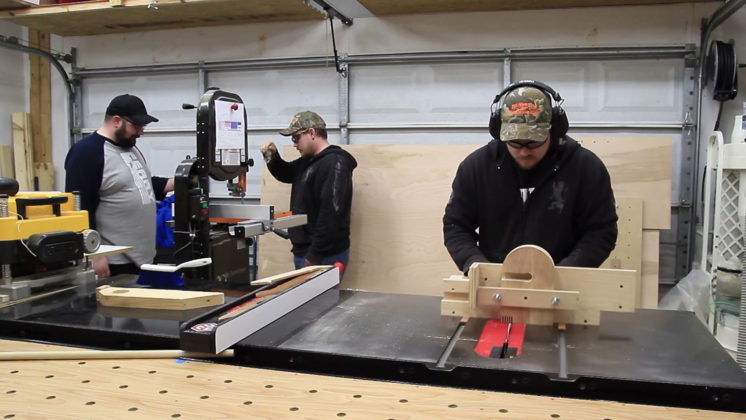 The glue bottle seemed to be in high demand in the shop so I tried to work extra quick with these. Some people are just impatient… 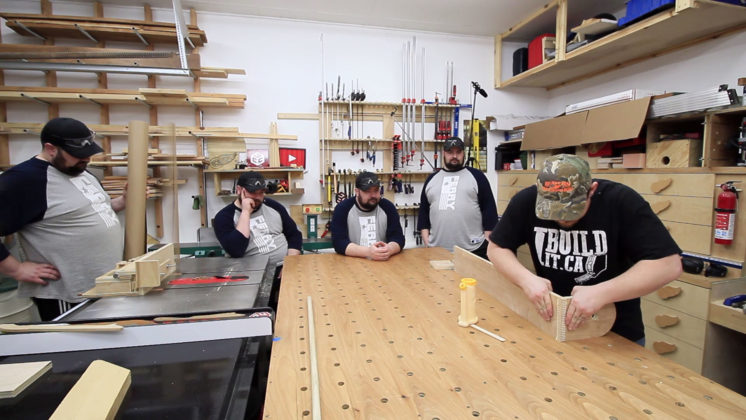 After glue-up the joints were a little less than perfect. A low angle plane is great at taking light passes to clean up plywood joints without taking off the thin veneer layer. I used the homemade twin screw vise on my new workbench to hold the assembled holder in place. Having a removable jaw for this vise has already proven to be a good idea. For those wondering at the time of posting this articl…a video on my workbench vises will be out on Sunday. 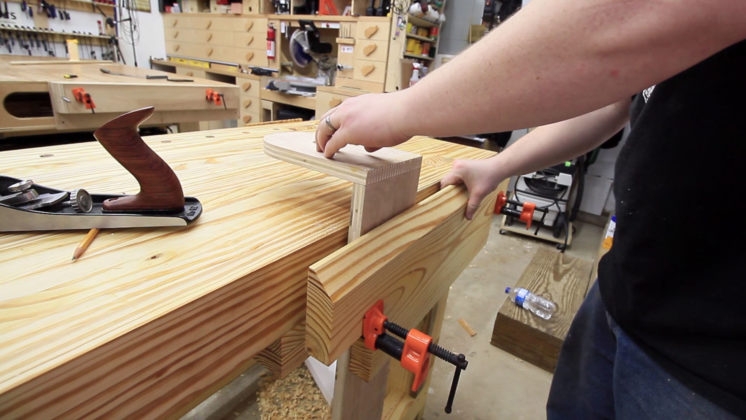 I’m very pleased with this Woodriver #63 low angle jack plane. It was a Christmas gift to myself this past December and I give it two very high thumbs up. More on it later. 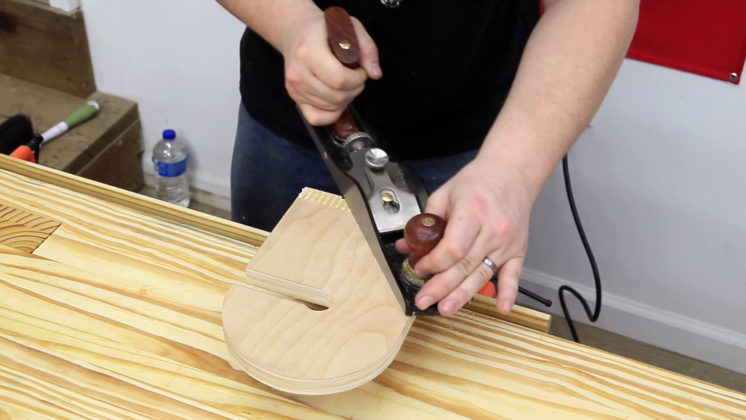 To cap off the dowel ends and prevent it from falling out of the holes we cut a couple caps. Just a 3/4” hole at about ¾ depth inside of a hole saw cutout. 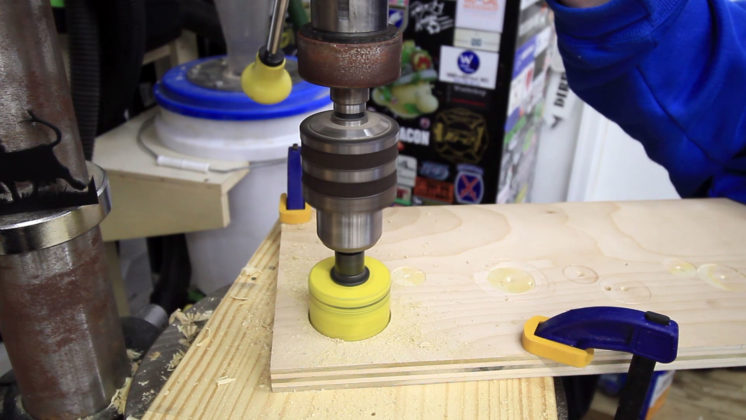 We didn’t show it in the video be we ended up gluing on one of the caps. The project went without a hiccup and was very quick to make. 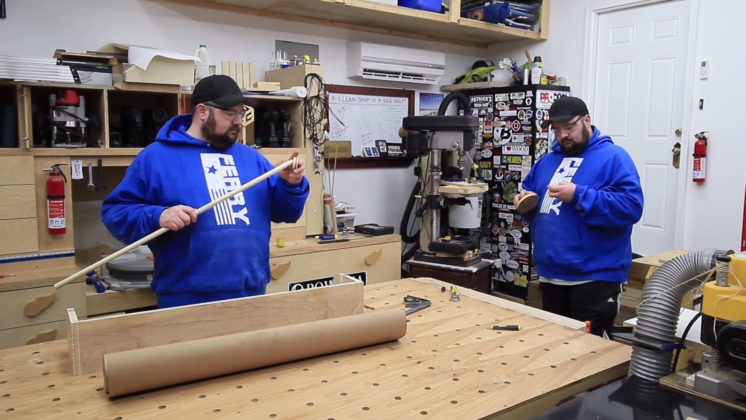 I mounted it to the bottom of the assembly table closest to my clamp rack. Just four drywall screws is all that is needed. The roll slides in from the back slots and rests in the bottom of the center hole. It works really well. 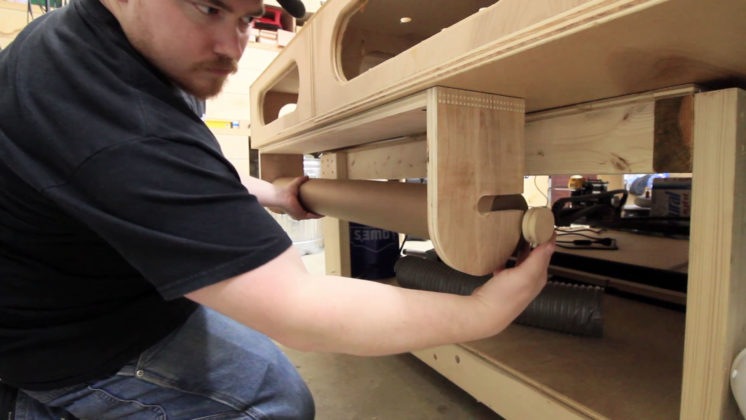 So this was a crazy simple and easy project to make. It took us two hours to make it including glue time and the extra time it takes to record the video. This is definitely a project I should have already made and I really recommend it. Also, be sure to check out Nick’s YouTube channel and subscribe if you want to see more of his projects. 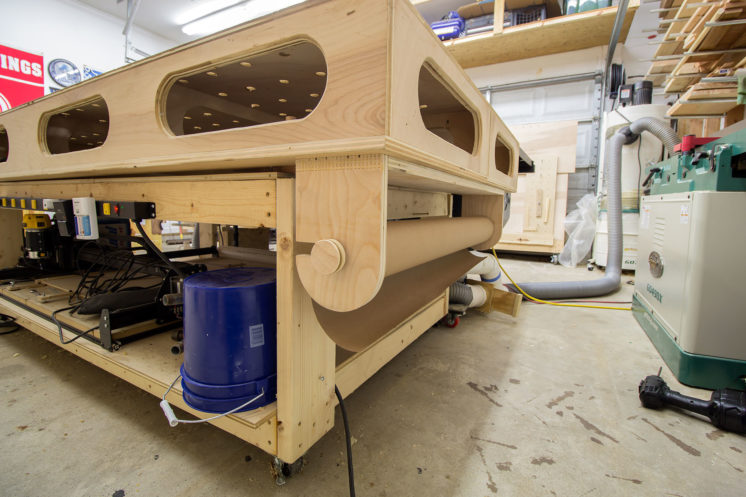 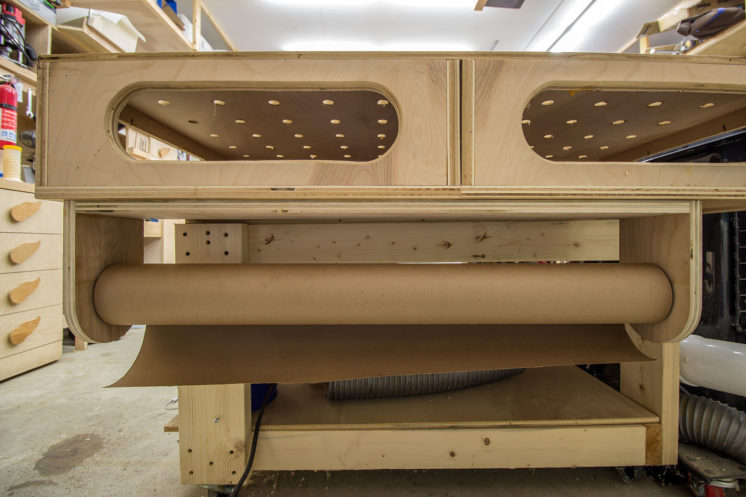 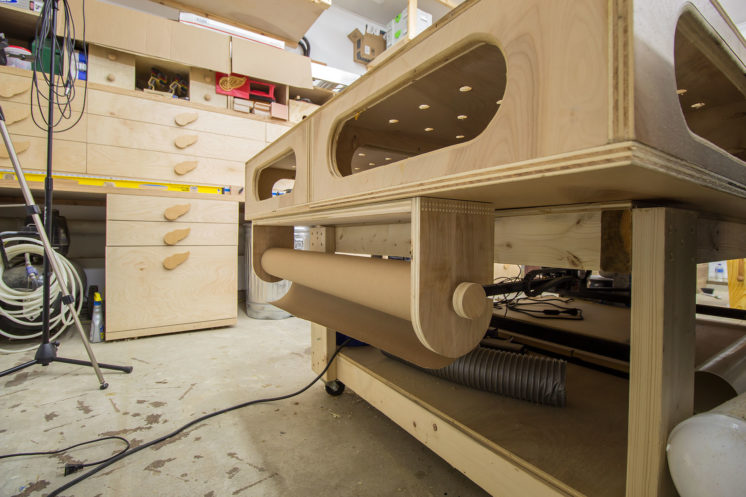