UPDATE: I had no intention on making plans for this but a lot of people have requested them. For those who are interested, click here for a detailed set of plans. I often get asked something along the lines of “Why do you not have your router table anymore? Do you not like using a router table or are they overrated?” I do like using a router table, they are not overrated, and I no longer have any of my previous setups because of one reason or another. Regardless of what you do or do not have there are always alternative ways to get the job done and since not having a router table anymore I’ve always just worked around it.

I’ve had an idea for a full size dedicated standalone router table for a while now but I haven’t quite worked out where it would fit in the shop. So until I figure that out I figured it would be beneficial to make a simple benchtop style router table for my DW611 trim router. This setup would only be used for edge work and doesn’t need to be super fancy or feature rich. It just needs to be functional and convenient. Because I’m also limited on space it would be really nice if I could nest it below my drill press table. 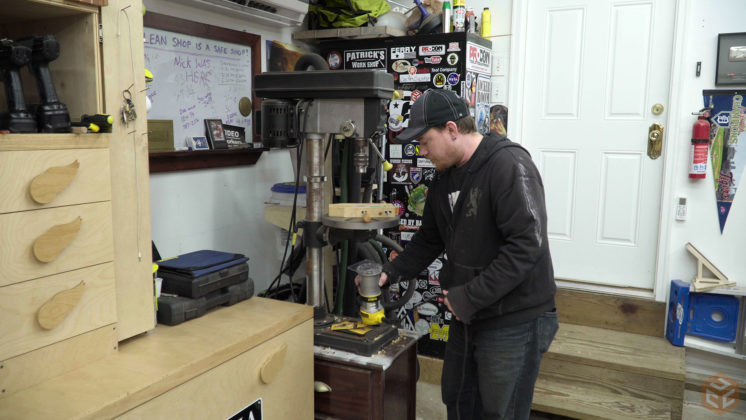 I’m using PureBond birch plywood. It’s not Baltic birch quality but it is the best stuff I can find locally without spending more than $50 per sheet. With a layout diagram printed I was able to cut all of my major pieces. 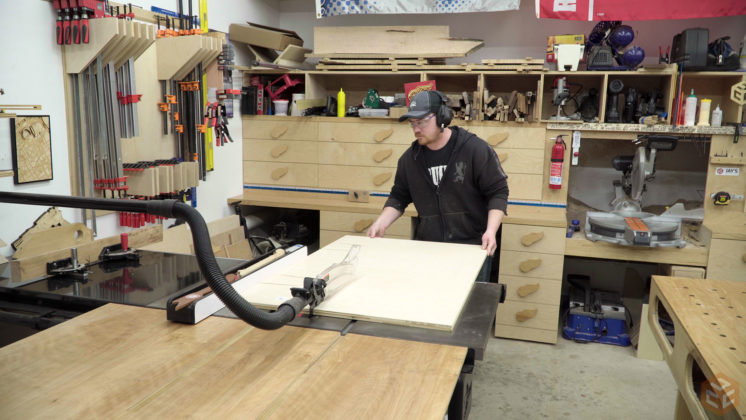 To make the connection of the sides to the top really strong I used a continuous box joint. 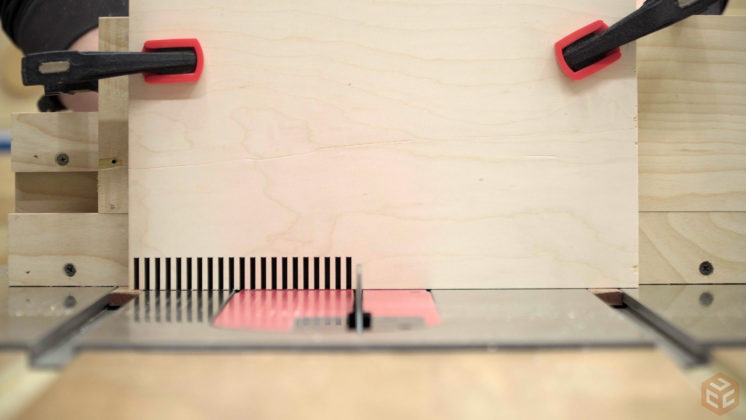 And a test fit confirms everything is good. 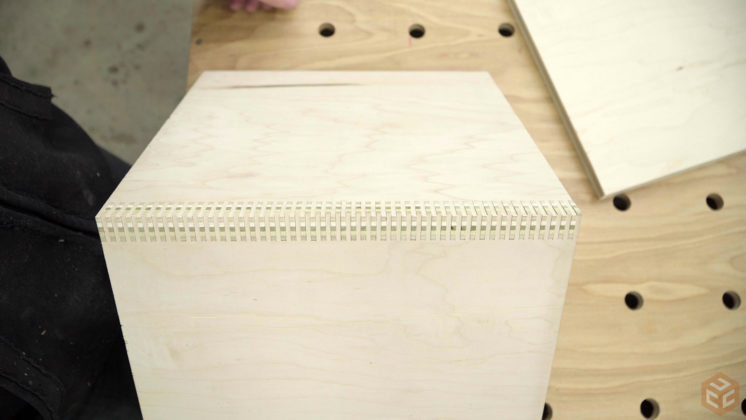 I added tape to the joints not necessarily to prevent glue from going anywhere but mainly to make the clean-up a lot faster. Just remove the tape and most of the cleanup work is done. 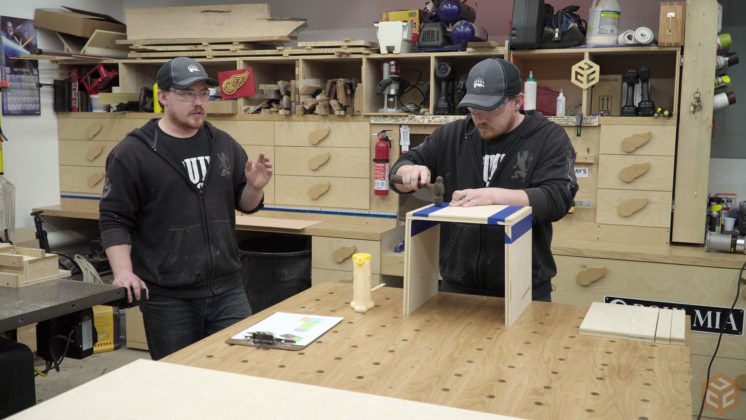 Once the joints were dry a block plane makes quick work of cleaning the surfaces of the joint. 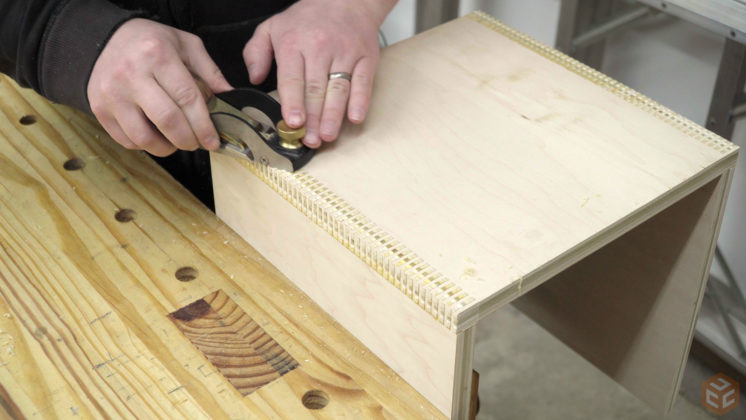 I was originally going to over complicate the router mount by routing a mortise on the inside of the top panel. After realizing that I had more than enough movement in the router base I instead used the base plate to layout and drill four mounting holes and one hole in the center for the router bit.

The original screws used on the factory base plate weren’t long enough to go through the plywood. I could have made the counter-bored holes deeper to accommodate the factory screws but I really didn’t like how thin it would have left the plywood. So instead I used longer screws. I had to go buy these but it only cost $1. 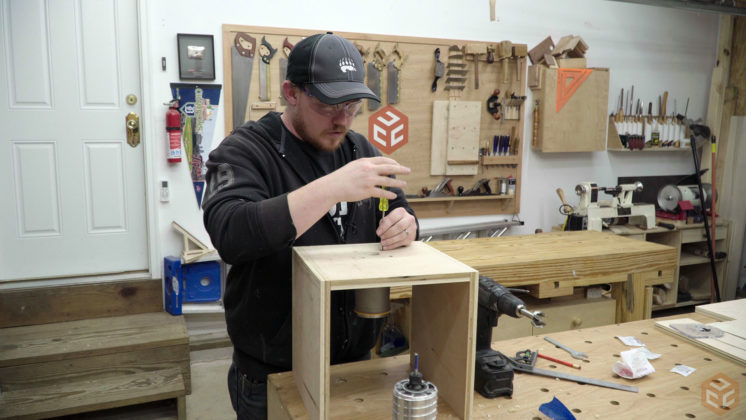 Once the router base was mounted to the box I tested the stability of it and also the built-in height adjustment. At this point I was feeling pretty confident that this whole setup would work very well. 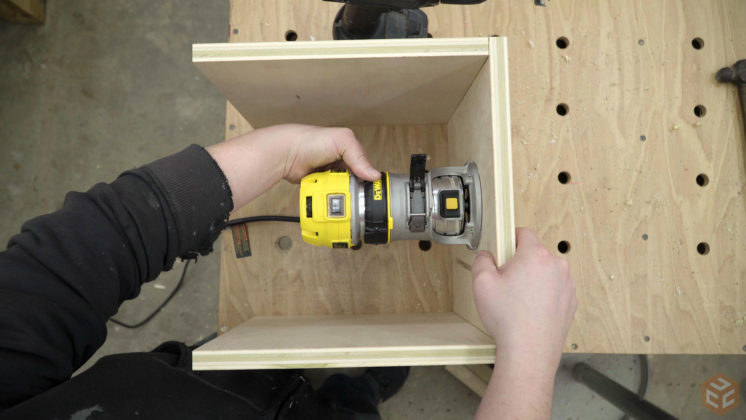 Instead of using a back panel like I originally intended on using I made an inset panel that I could secure close to the router. This will really aid in preventing racking. To allow room for the router cord I had to cut a slot in the panel with the drill press and bandsaw. 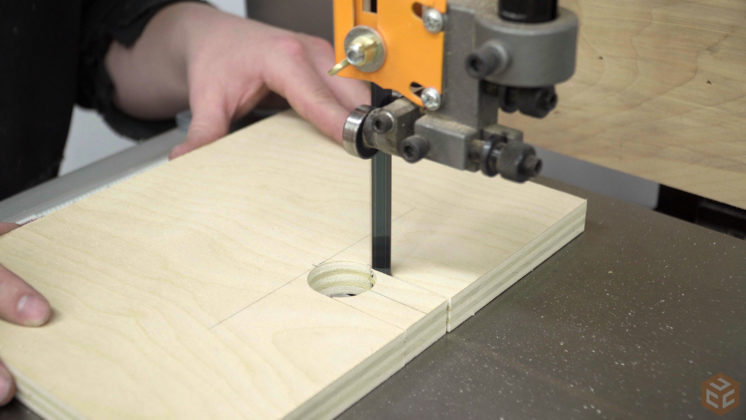 Then the inset panel can be installed. I used a couple brad nails to hold it in place while I predrilled and drove screws to secure it. 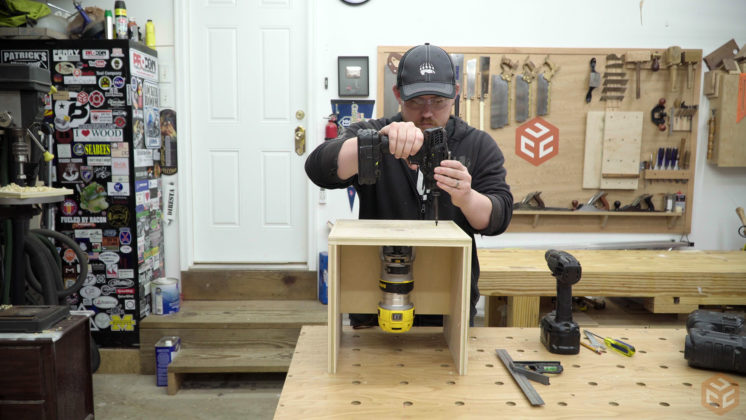 Next up is the fence. This router table will only be used for small tasks like edge details or shallow grooves. Because of that I didn’t want to make the fence opening large. I found the largest size bit that I think I will be using for this setup and sized the opening according to it. To start I drilled a hole near the edge of both the horizontal and vertical piece of the fence. 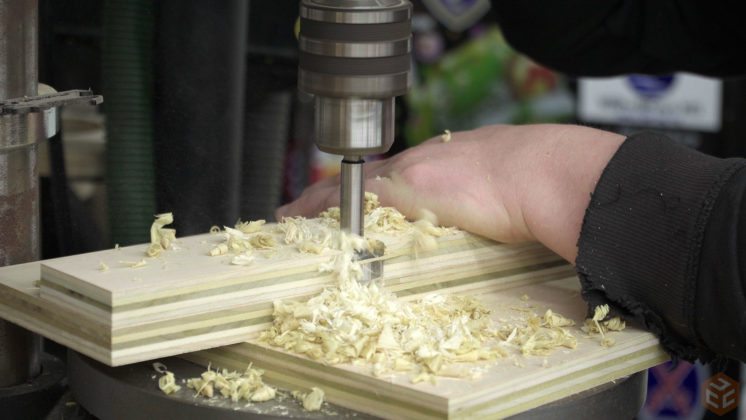 Three small blocks are used to make the dust box in the back of the fence. 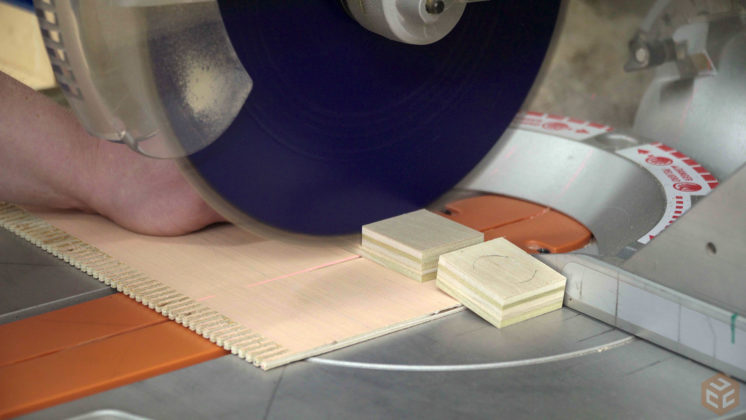 A little bit of glue and a couple of clamps later I had the fence all glued up. 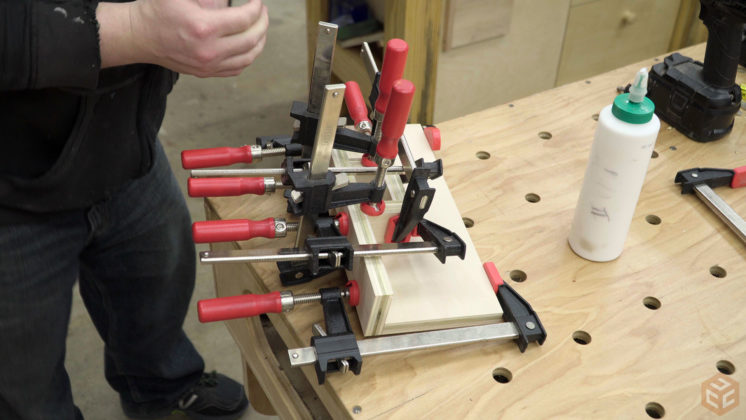 The position of the fence is somewhat critical due to the inside vertical panel. Once the placement is worked out I clamped the fence in place and drilled through both the fence and the table. 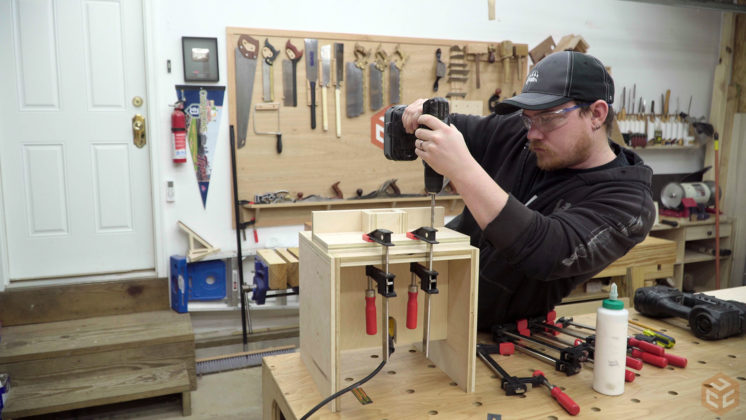 The carriage bolts I used were a bit long as I just pulled from what I had on hand in my hardware drawer. I though about cutting them shorter but they aren’t bothering me any. A fender washer and a plastic knob make locking down the fence really easy. 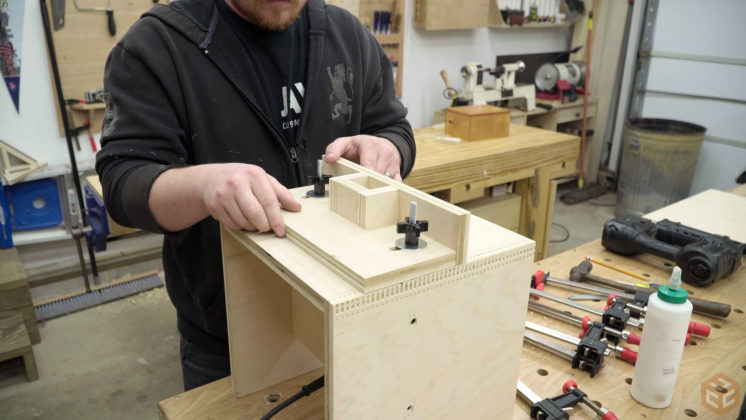 One final piece needed is the cap for the dust box. I cut a rectangle on the bandsaw, drilled a hole on the drill press, and used the router table itself to route a chamfer on the top edges. 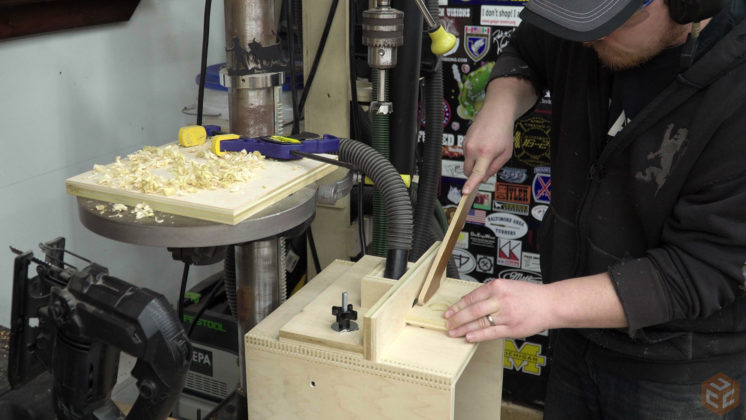 And installed it with some glue and a quart of paint to act as a clamp. 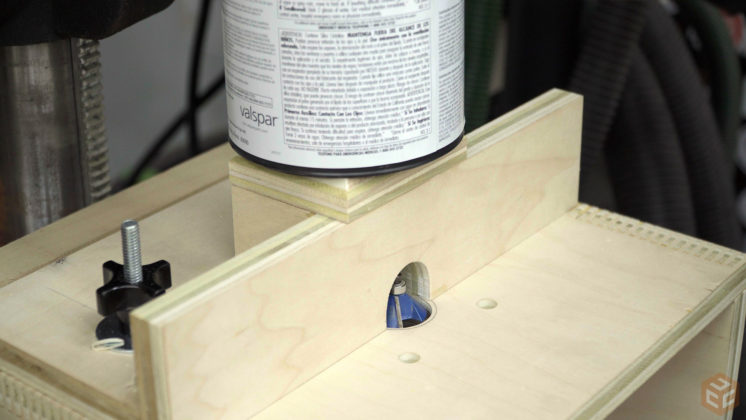 The dust collection works great. It’s not 100% as a tiny bit does escape down below and the last tiny bit of the cut doesn’t get sucked up either. I’d say it’s about 94.8847% effective. 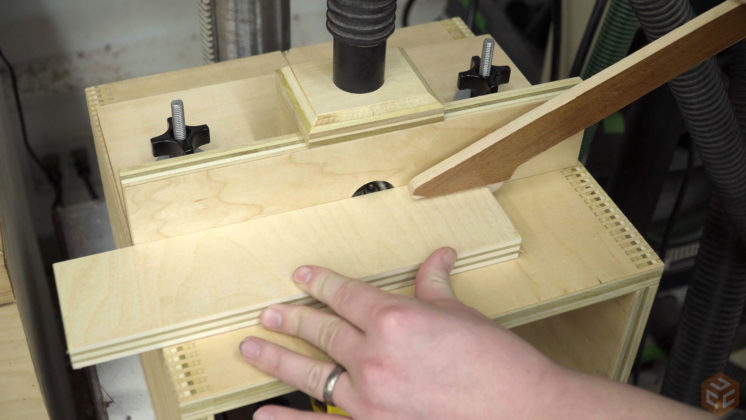 And here it is 100% complete. I planned on attaching a couple of wings or feet to the bottom of the sides to screw through and into the nightstand below but they ended up not being necessary. I realized that the base of my drill press has a taper to it so a block of wood can be used as a wedge to lock the router table down. This works great and is a LOT more convenient to remove. Side note: I have no clue why the color balance changed on these last pictures….and no clue why I have zero desire to correct it :) 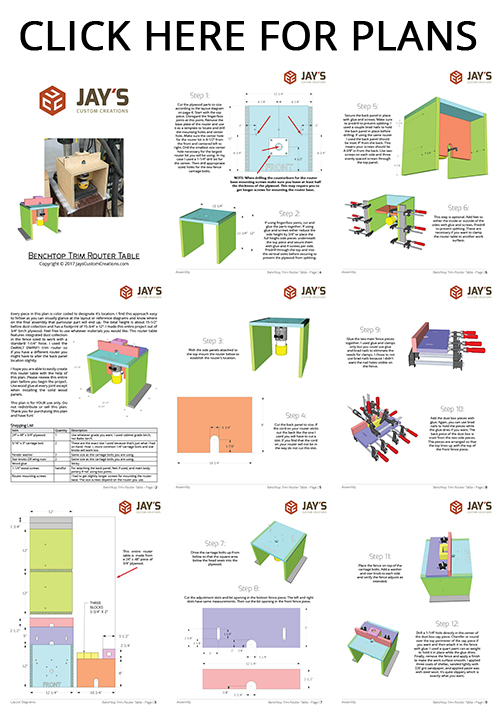 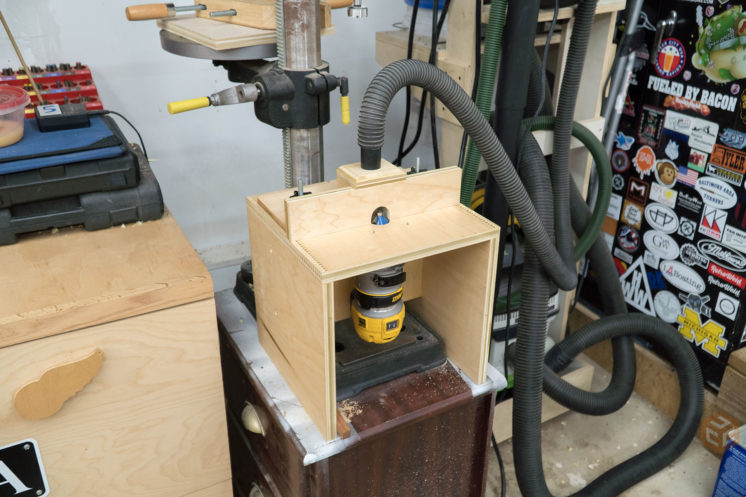 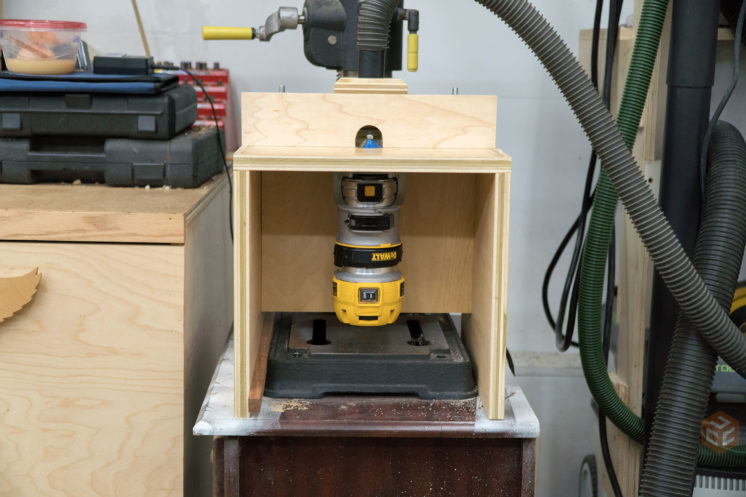 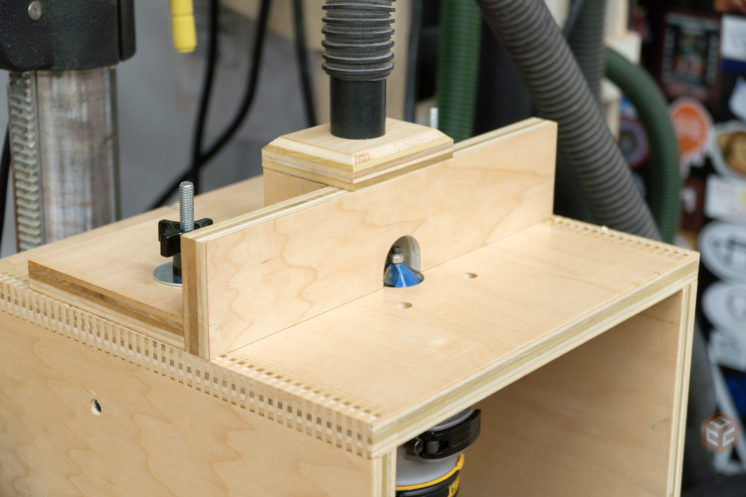