The new shop build out begins! My wife and I just moved and one of the criteria for the move was a bigger shop for the business. The house exceeded all of our criteria and the shop out back is a great foundation to renovate and turn it in to a great work shop for my needs. The shop slab is 40′ x 40′ with the shop itself taking up 30′ x 40′ of that space. There is a 10′ lean-to on one side with an above ground storm shelter dividing that space. The structure itself is only 4 or 5 years old and the previous owner built it for automotive uses. I knew going into the move that the shop wasn’t 100% perfect and needed a little bit of work. In this article I’ll walk you through the structure and let you know the issues and my plans to renovate it for my needs. 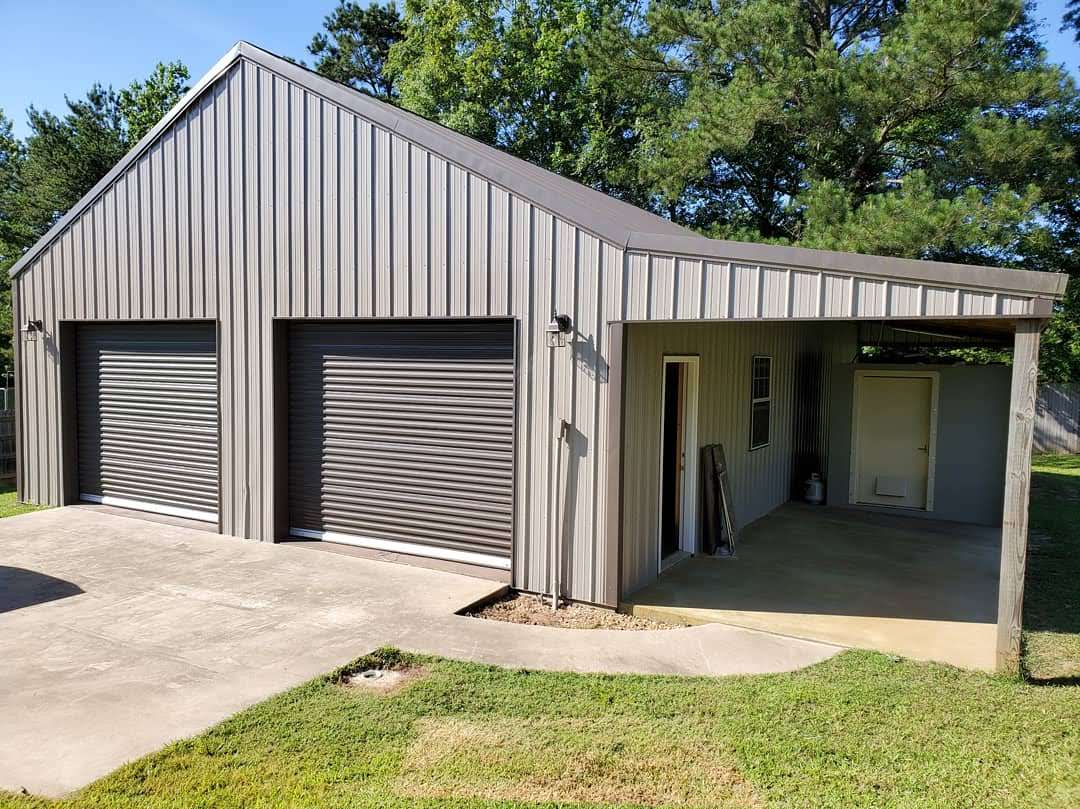 Inside it looks like a basic pole barn structure. There’s a 6×6 post every 10 feet connected by five horizontal 2×4 boards. These 2×4’s are what the exterior tin is screwed to. Between the tin and the 2×4’s is a thin membrane of some kind to act as a thermal break and also prevent condensation on the inside of the tin. That’s my guess anyway.

Inside you will see the man door and a window on the right wall, stairs to the loft and the forced air HVAC intake and exhaust on the back wall, and two high horizontal windows and an exhaust fan on the left. There’s a lot of character already established with the shop. The previous owner used old metal tin on the ceiling as well as the first few feet on the walls. Then black peg board was added above that. The pegboard and tin will be removed as it doesn’t suit my needs. In it’s place will be a 2×6 framed wall on 24” centers, insulation, and 3/4” smooth face plywood. This will give me a lot more mounting options and do a much better job of keeping in the climate control. 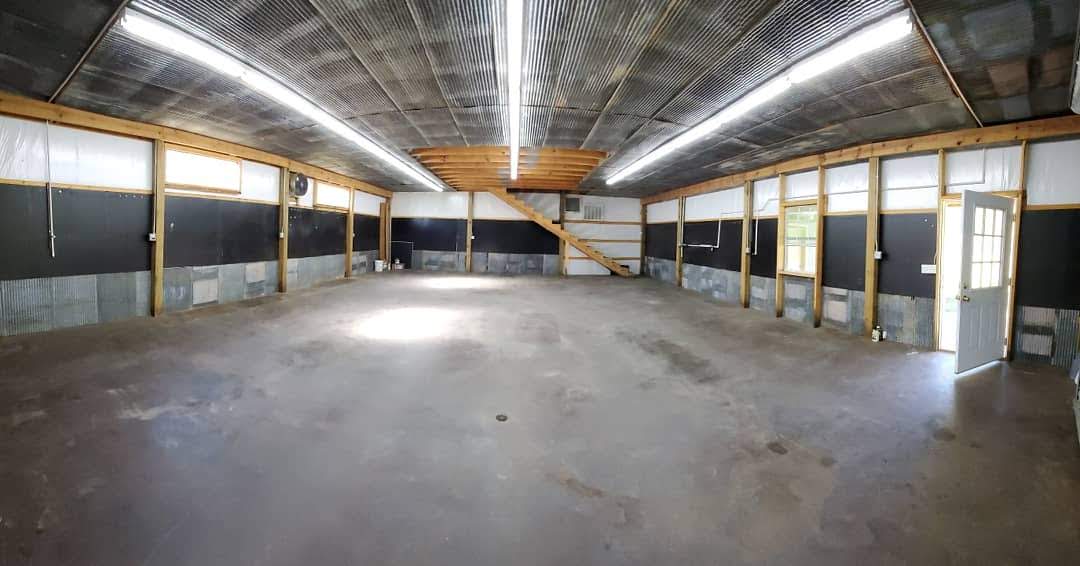 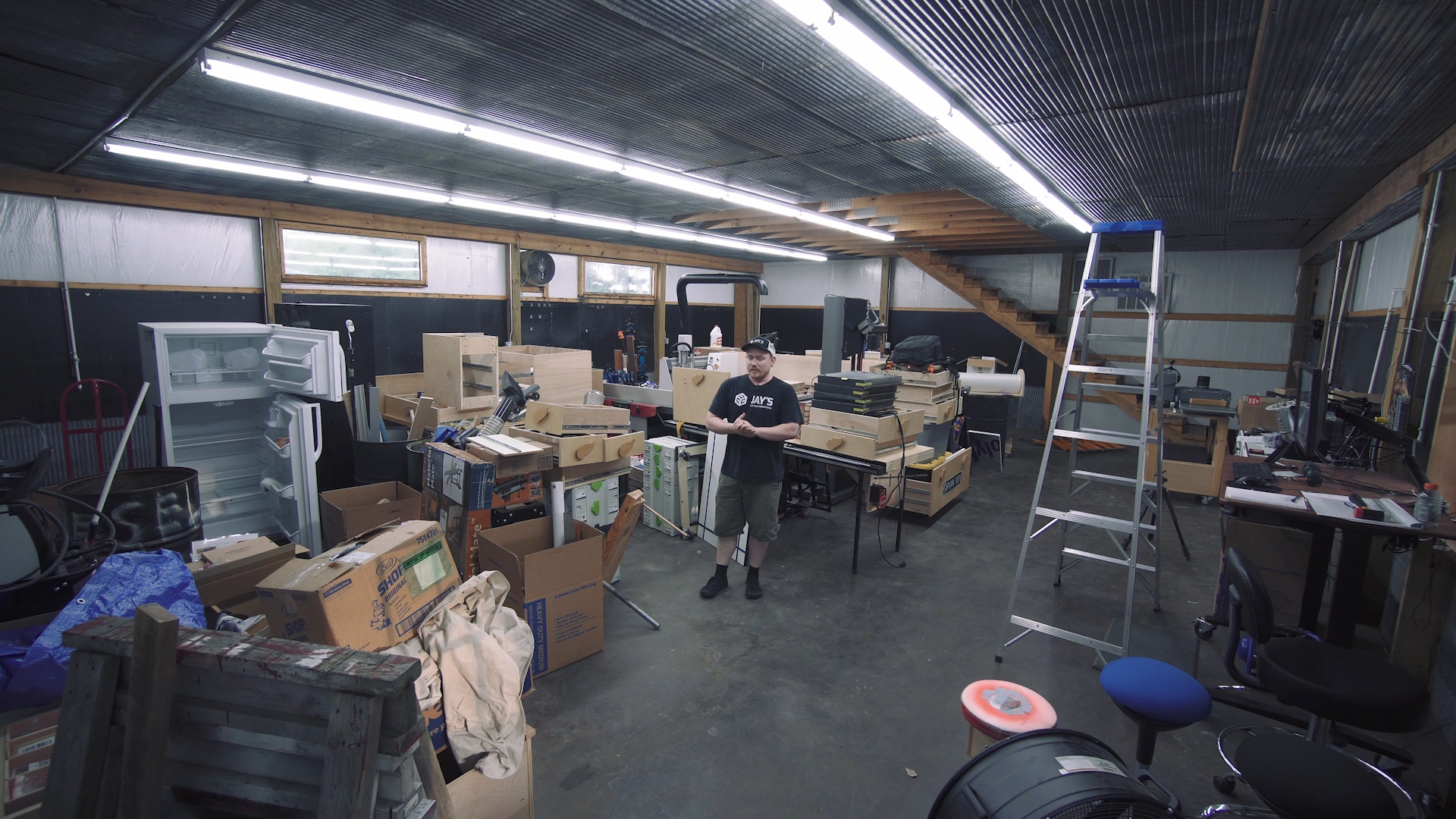 As you walk in the man door the electrical panel is in the corner to your left. The refrigerator and office will be immediately to the right. If the refrigerator is too noisy for recording audio with my computer then I’ll move it. 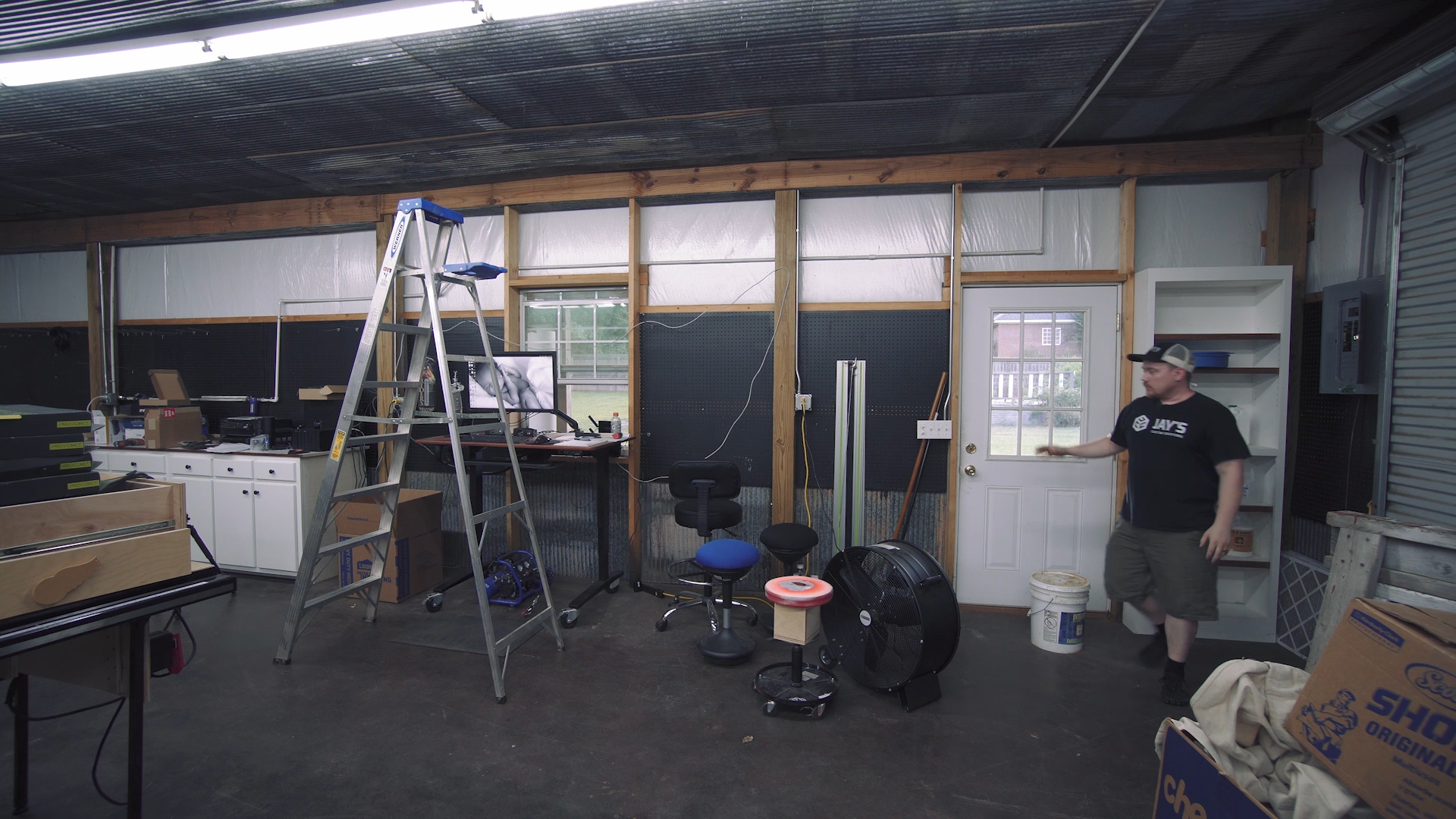 The office will extend down this wall as I brought all of the items I made for my last office. I’m not entirely sure if I will use the higher office table I made as it was primarily made for my dogs, which won’t be in the shop with me. 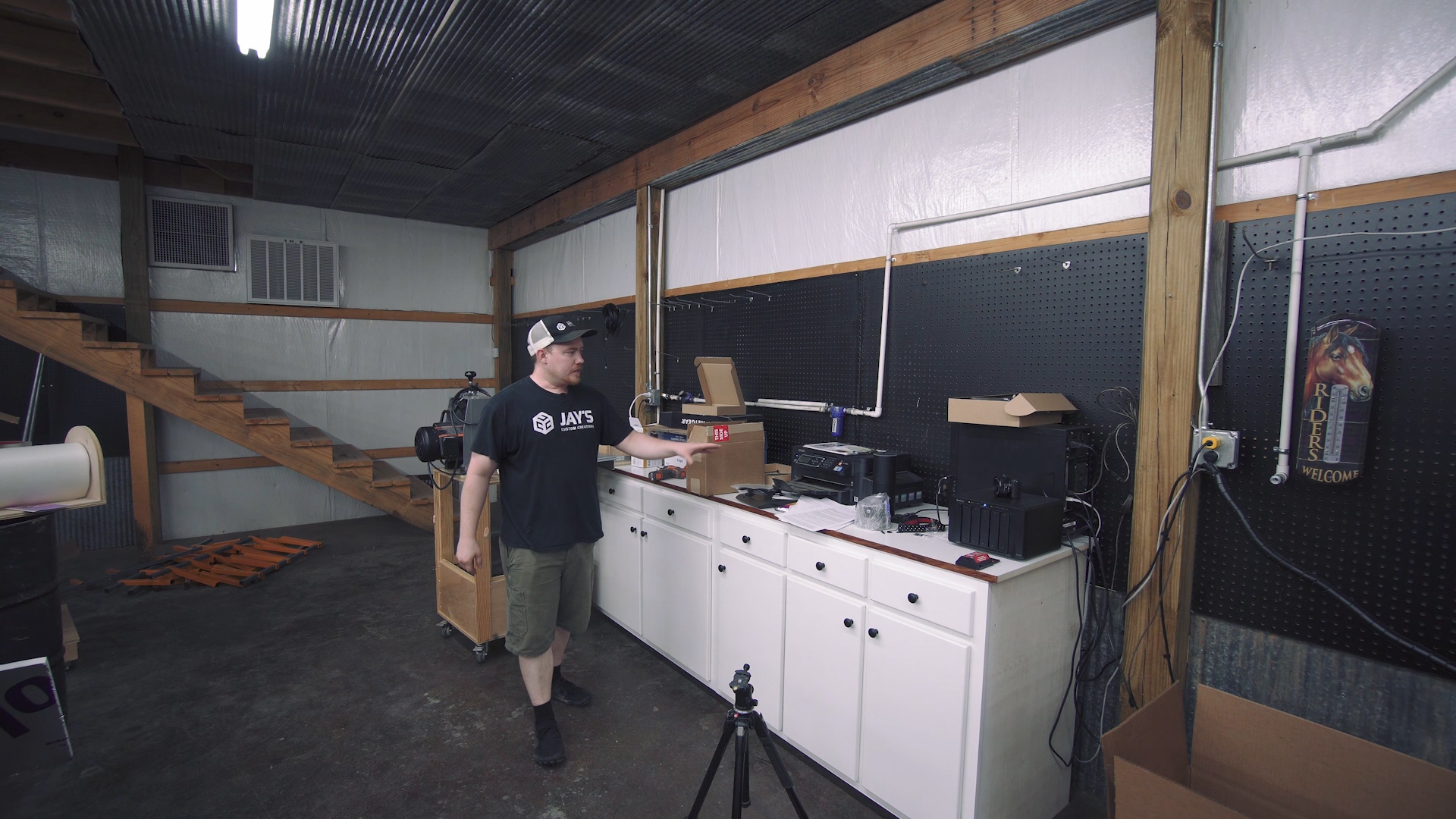 This shot has your back against the back wall and looking forward. There are two large roll up doors at the front. They are painted brown on the outside and with the sun shining on them they bake! A lot of heat is radiated into the space from the doors. The morning sun rises about 20 degrees off from the front of the shop so the amount of sun that they get isn’t extreme but it does cause heat issues. I’d love to replace these with insulated doors with windows. The windows will allow me to see out towards the road and know if anyone pulls up to the house or shop and because no working stations are right at the doors the light coming through won’t cause issues with the camera.

You can also see the ceiling tin and lights in this image. The tin stops where the loft is upstairs. The lights are good enough to work in here but not good enough for video purposes. They will be replaced with the LED light setup from American Green Lights that I had in my previous shop. 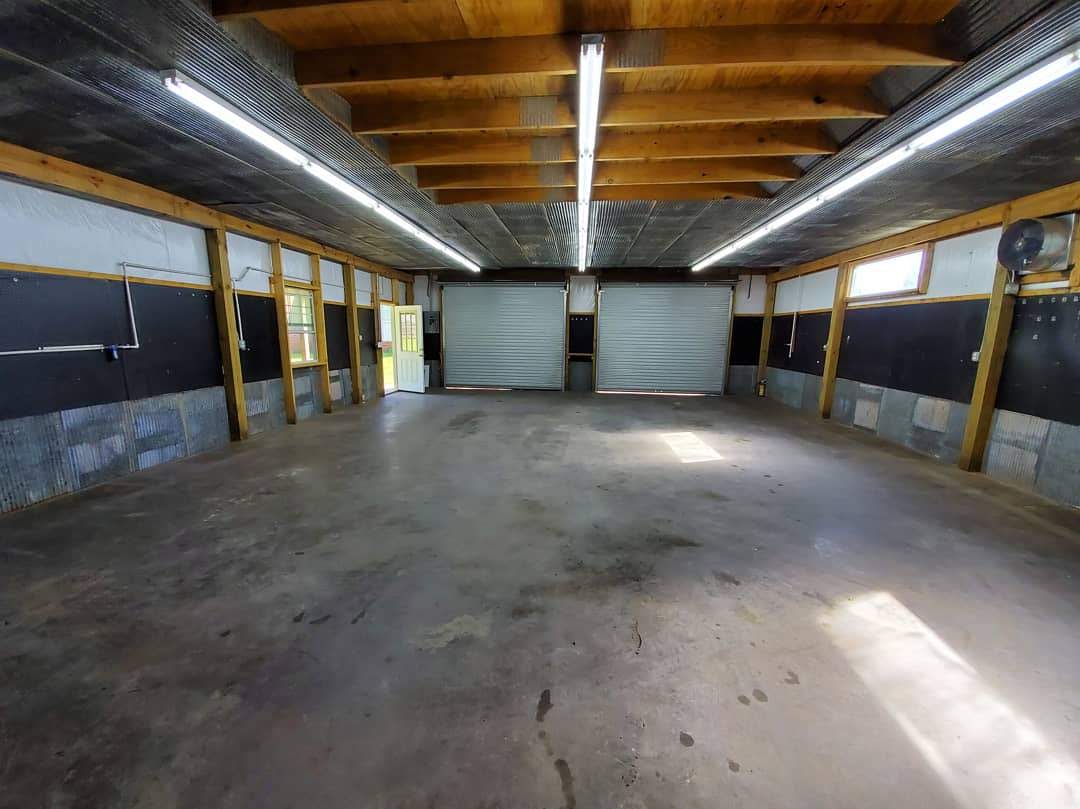 On the back wall is the forced air HVAC. The unit was working and passed inspection when we bought the property but I knew coming into the situation that this unit was not ideal and would eventually be replaced with a mini split unit. What I didn’t know was how problematic it was and that I would only get a couple working days out of it. When I first got into the shop the gas levels were low enough to not even show up on the gauges and the start capacitor was dead. The capacitor is an easy fix but the gas levels being that low tells me there’s a bad leak somewhere. I went ahead and got those two issues resolved and it cooled the space perfectly for just a couple days. Then something near the compressor shorted out and killed the system for good. Knowing that this unit would eventually get replaced I decided to stop messing with it and prepare for the replacement. In the mean time it’s a million and a half degrees with the high heat and humidity of Mississippi.

Also on the back wall is the stairs that go to the loft above. 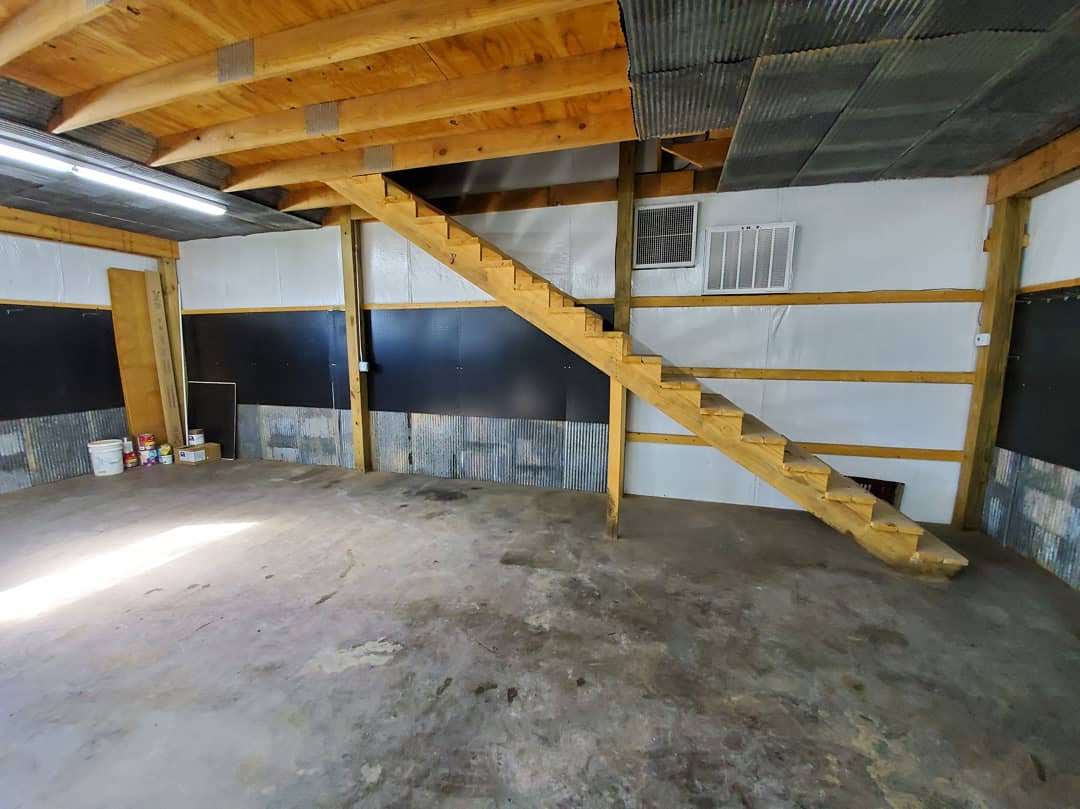 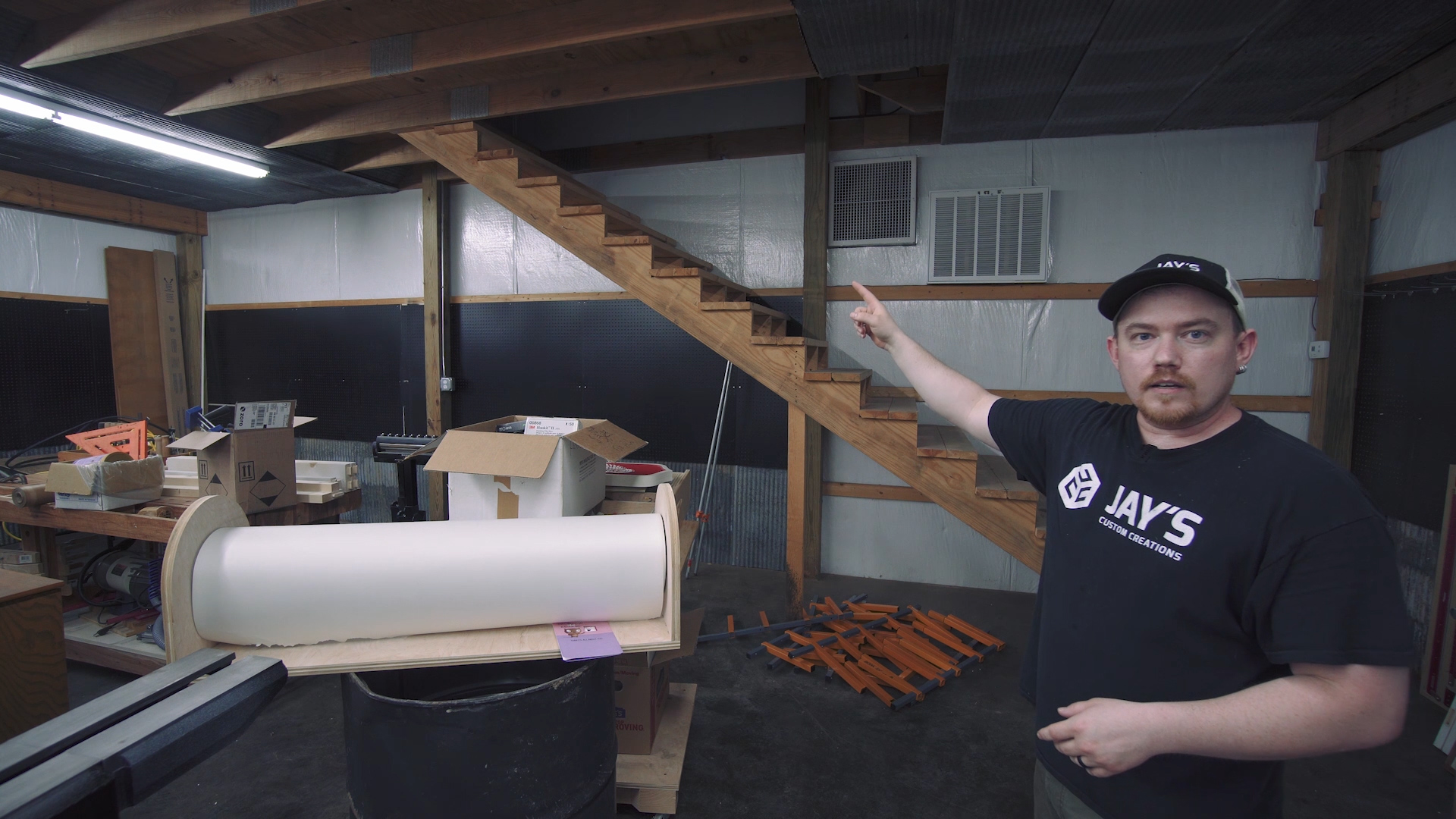 The loft is 12′ wide and 20′ long. Plenty enough space for long term storage. Plan A was to use this space for low weight storage to help keep the space below tidy and less cluttered. While moving into the space my friend Jeremy suggested boxing in the loft and turning it into an office. I liked the idea and decided that this Plan B was the route I was going to go. But after a lot of consideration and dealing with a lot of little issues that come up in this scenario I decided to go back to Plan A and use it as storage only. Maybe in the future I’ll explore this idea more. 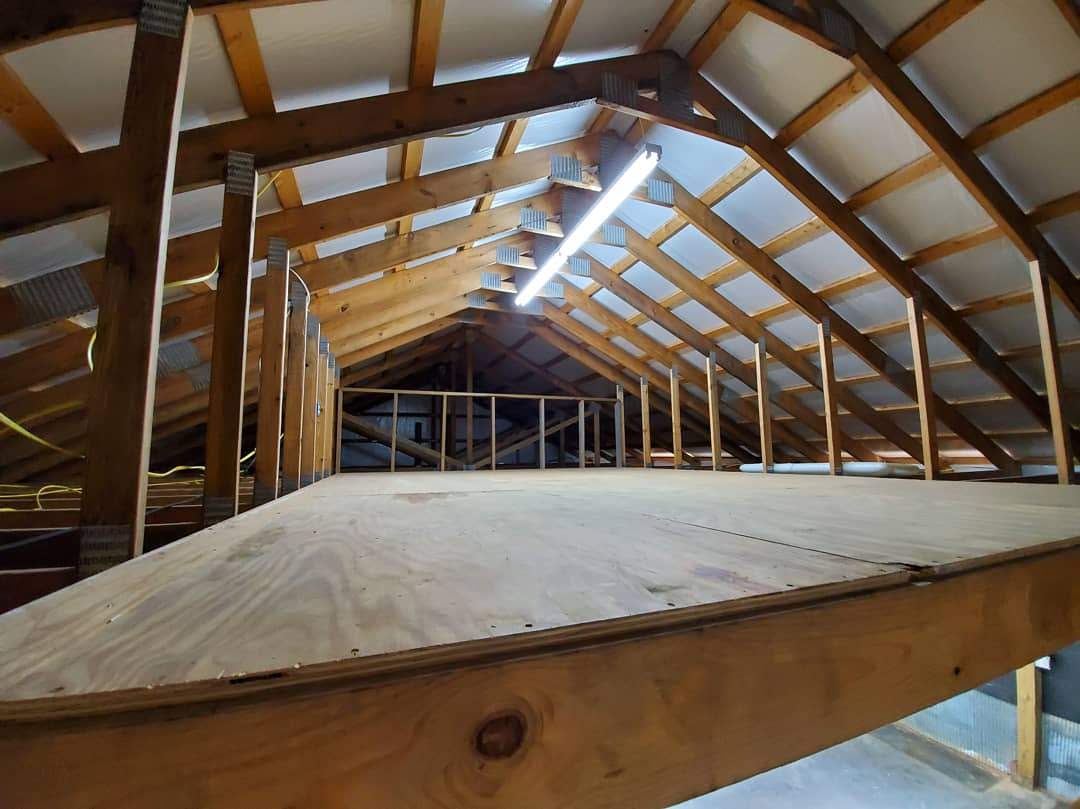 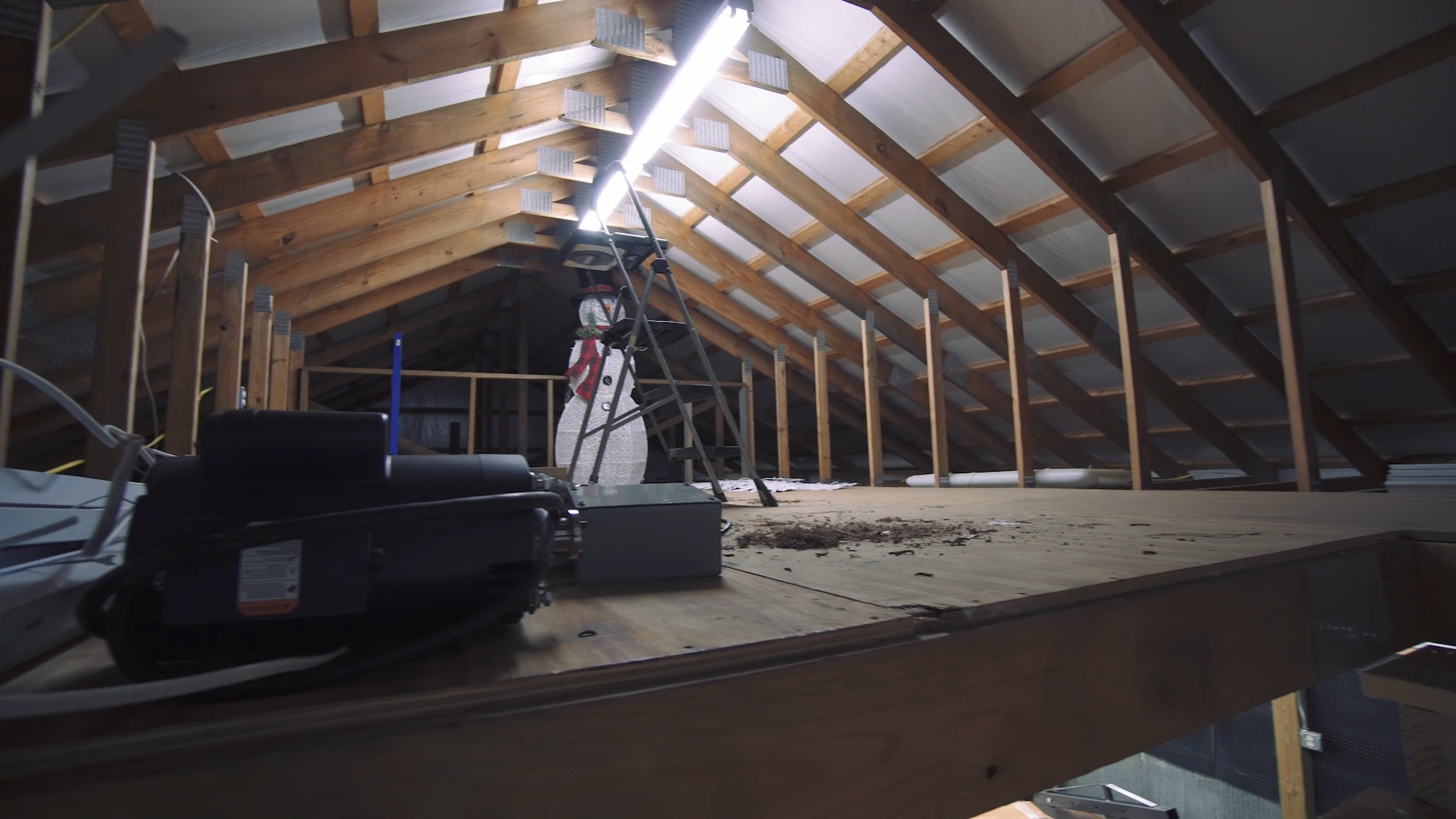 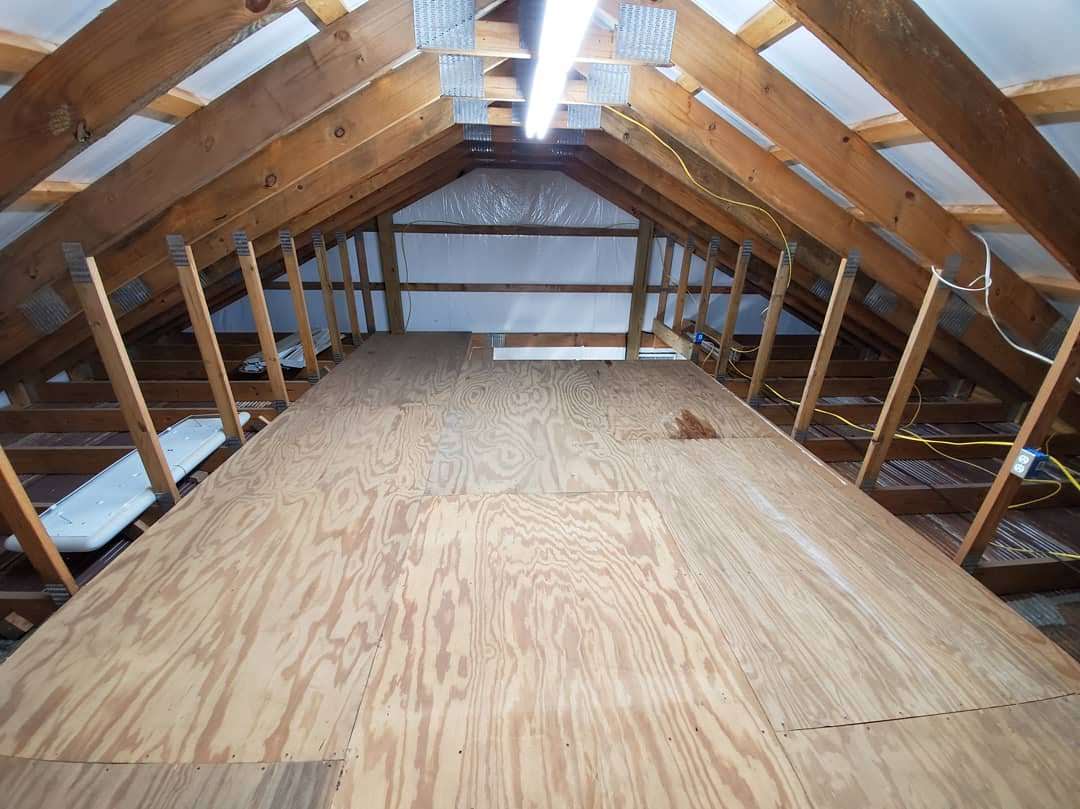 Back downstairs there is one more wall to discuss. When we were in the inspection stages of buying the house I met with the previous owner and he was transparent about the few issues the shop had. One of which was the fact that these two windows leaked under heavy rain. He also said that the windows were re-purposed out of a set of french doors. He opened up the windows to clean the inside and that’s what caused the condensation to form between the window panes. I was able to stop the leaking issue but haven’t gotten around to cleaning and resealing the inside of the windows. I’m not sure if I’ll even do that though as I might heavily tint or even block off these windows completely. These windows shine a lot of natural light into the space in the morning. Natural light is great for working in a space but not so great for filming in a space.

As you come in the roll up door in the front the lumber and sheet goods will be immediately to the left on the wall. Followed by the miter saw station somewhere under the exhaust fan in the middle and the window closest to the camera. 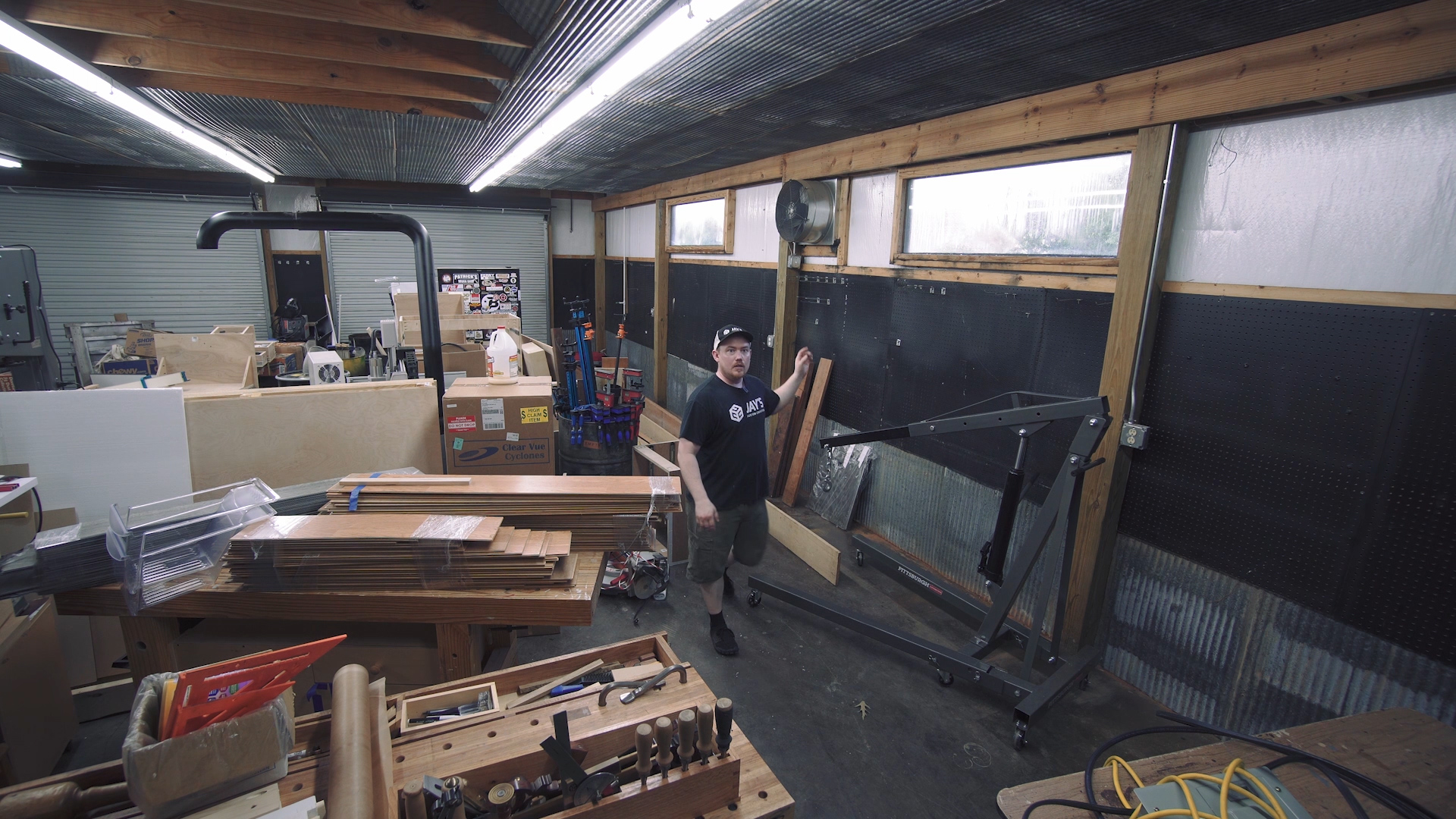 The lean-to outside is divide by the storm shelter. As of right now both the front and back space of the lean-to are in disarray. I likely won’t put any effort into setting up these spaces until the shop is fully functional. The storm shelter is one of those things that I’d rather have and not need then need and not have. I live in Mississippi, which regularly gets hit by tornadoes. Thankfully, my family has not been affected by a tornado but I know several people who have. With modern weather technology, and the fact that I can’t sleep and am always glued to the radar on my phone when the weather gets bad, we will be able to seek shelter in advance of a nasty storm approaching. 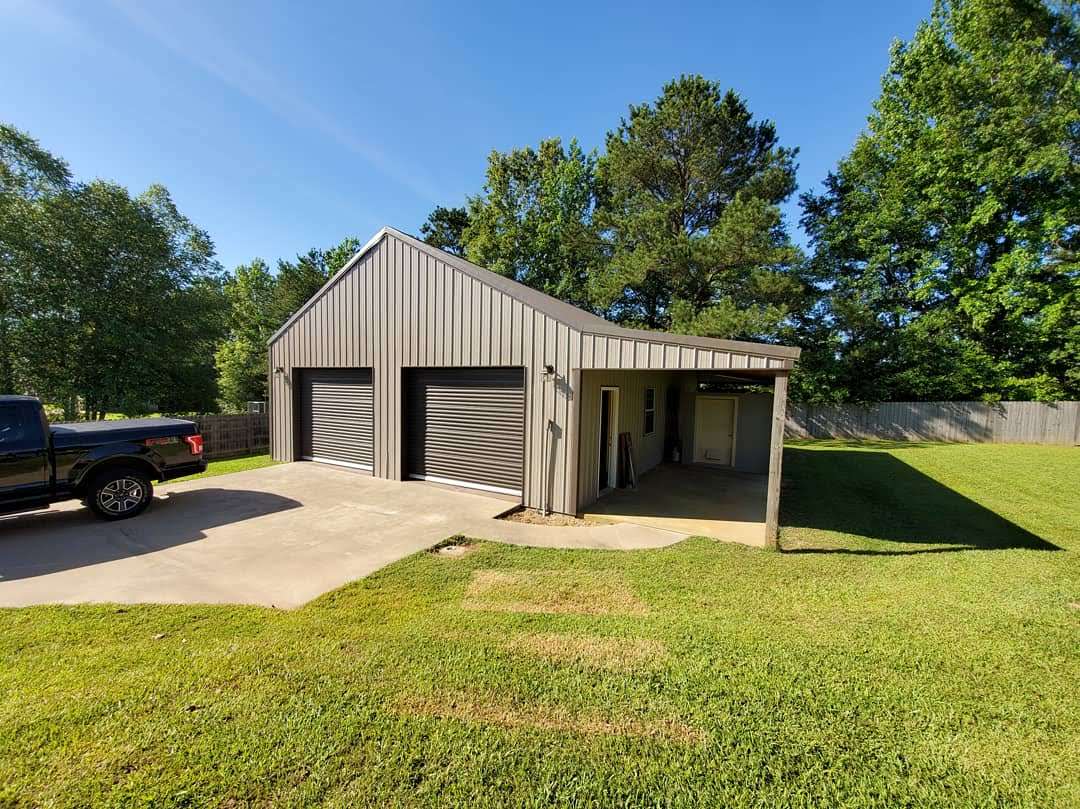 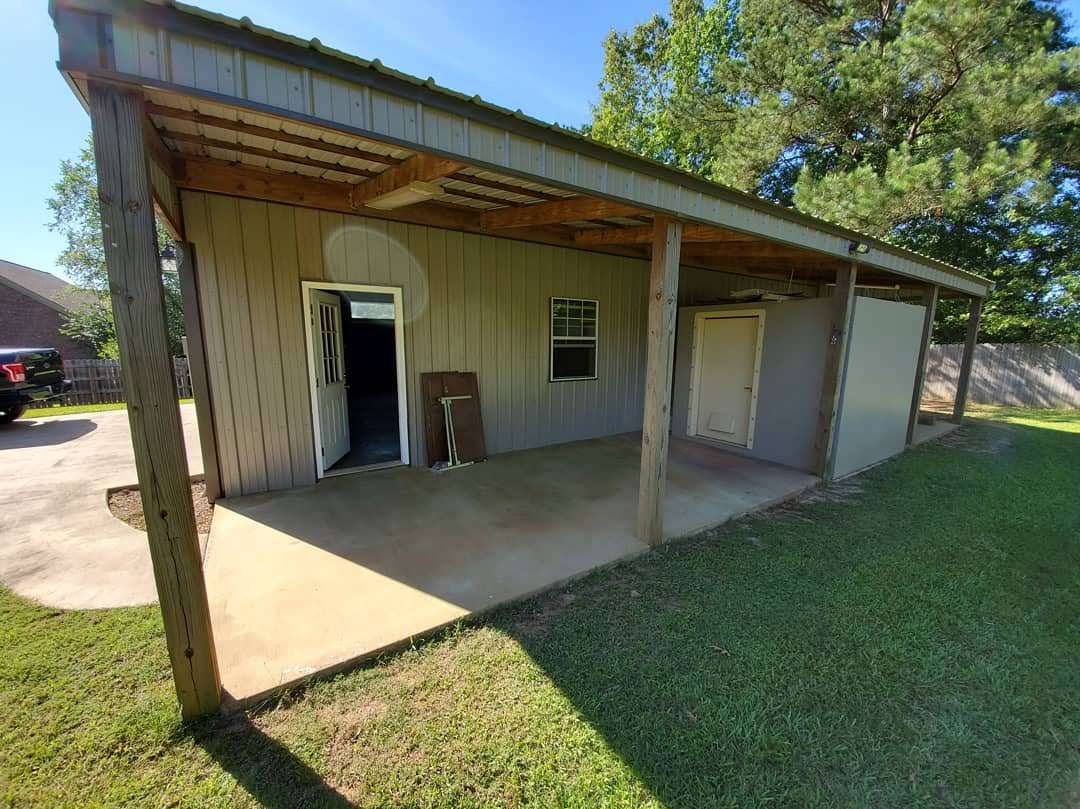 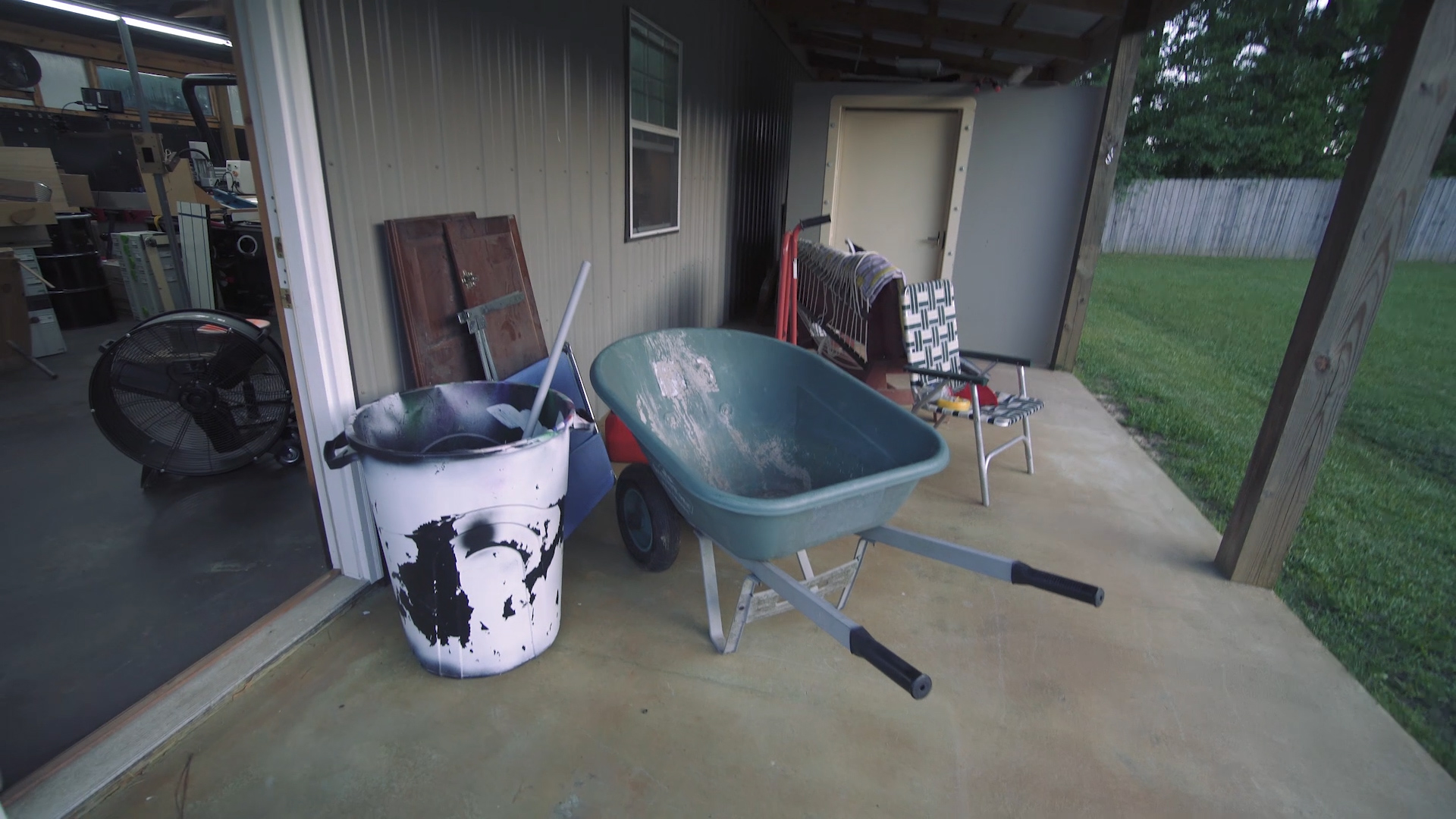 The storm shelter conveniently blocks visual access to the back of the lean-to. This is where all of my lawn equipment will be stored. I have a few ideas to really organize this space but as of right now it’s just a cluttered mess.

There is enough room to walk between the storm shelter and the shop but I doubt I’ll keep that space clear. Right now I’ve got a few slabs taking up that space. One idea is to put all of my lumber racks on that covered exterior wall of the shop.

The top of the storm shelter is also another storage location that I want to expand upon. My thought is to use 2×6 boards with decking of some kind on top to make another floor above the shelter. The 2×6 joists will provide cubbies to slide longer items in, such as lawn tools with long handles, without interfering with the horizontal floor space above. 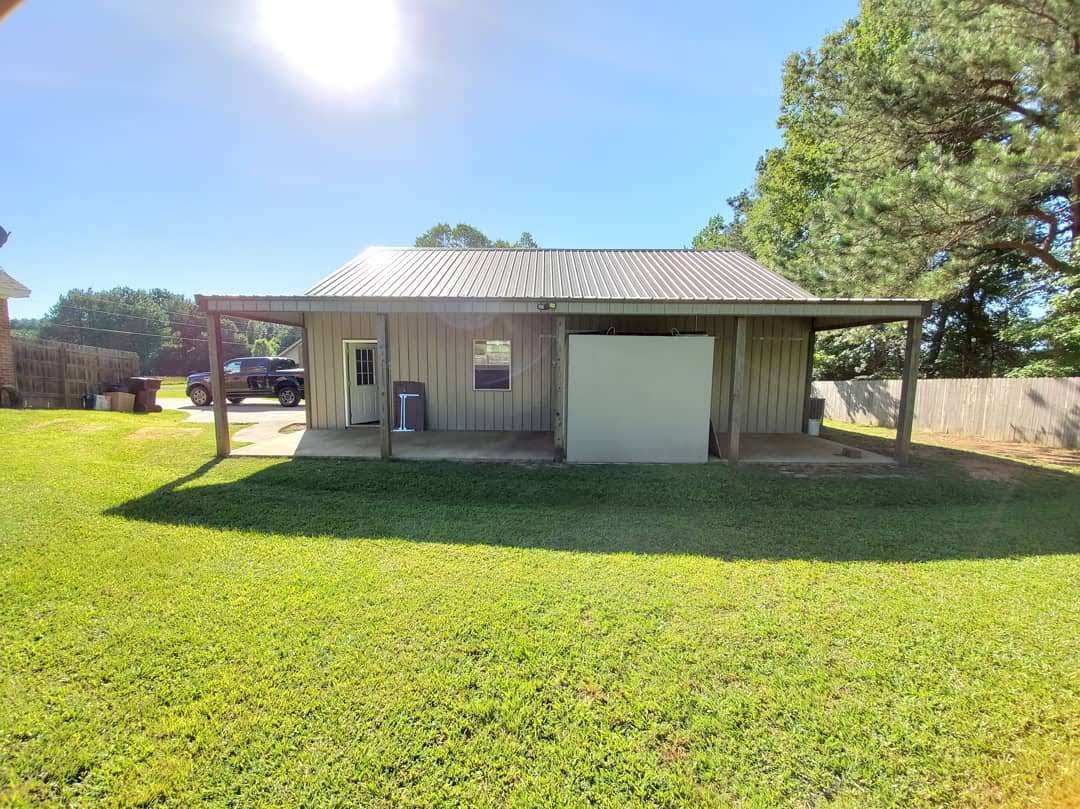 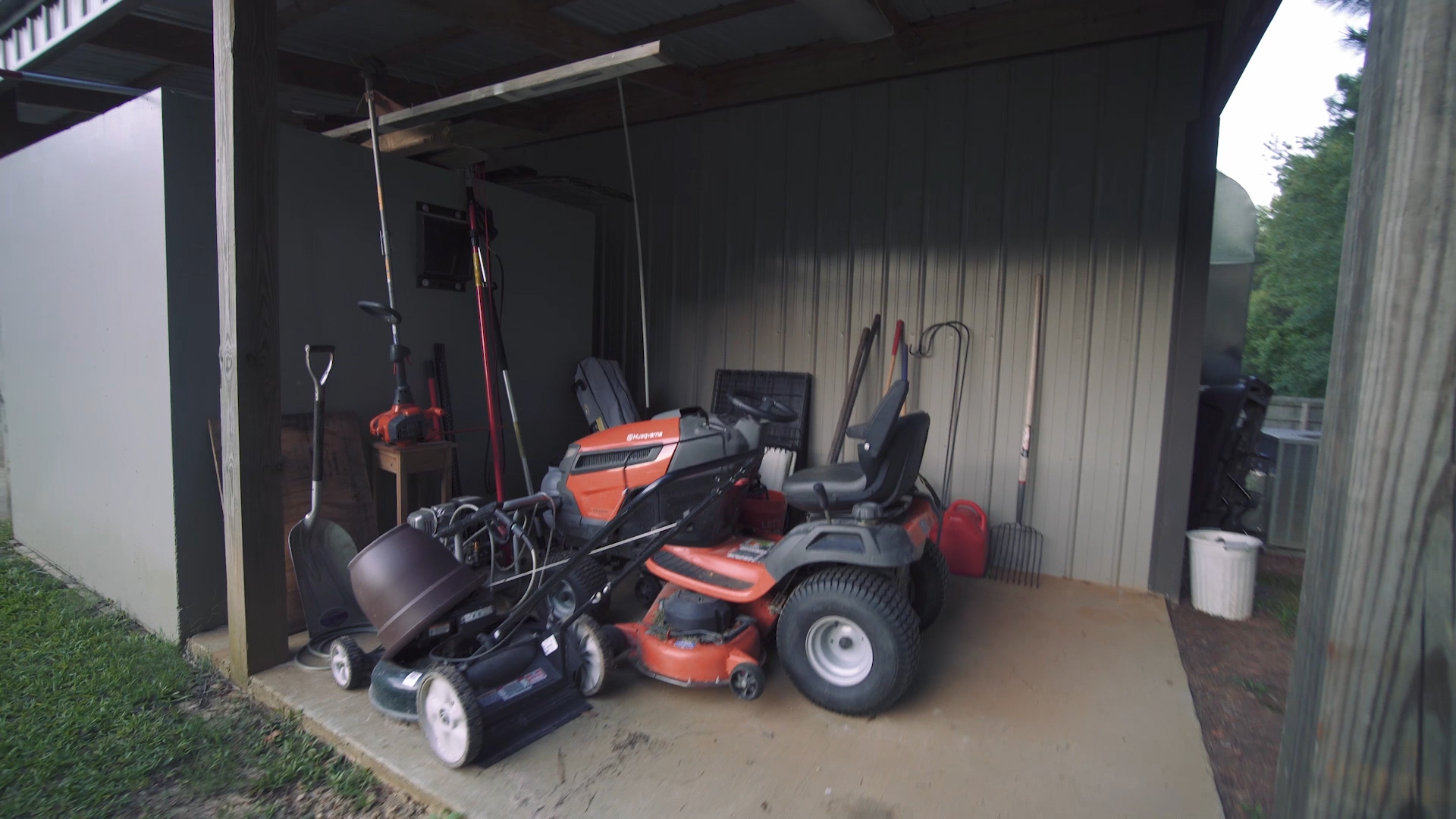 That’s it for Part 1 of the new shop series. Part 2 will most likely cover how I moved everything to the new space. Talk to you later! 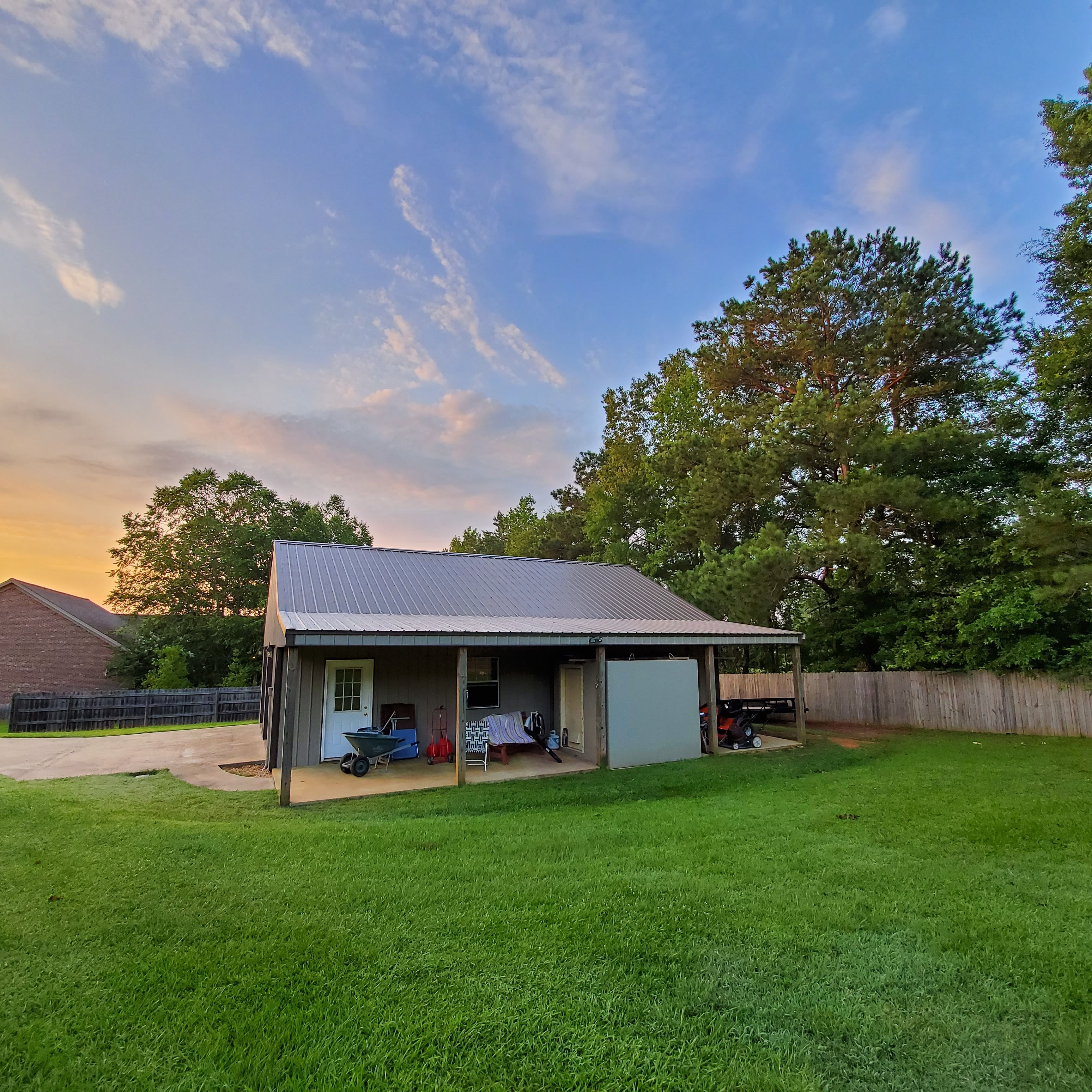