Having already build my dual router lifts I now needed to focus my attention on building a table for them. I had a few requirements that I wanted to incorporate into the design:

The router lift design I chose is a pretty beefy design with the router on one side of the lift and the inclined plane and crank mechanism on the other. My thoughts were to secure the lifts to each other with a panel on front and back. This would allow both routers to be in the middle of the cabinet and both lifts to be on the outside of the cabinet. Having the lifts on the outside virtually eliminates the possibility of dust causing problems with the inclined plane. I doubt there would be a problem if the lifts were exposed to dust though. Here’s the prototype of the cabinet. 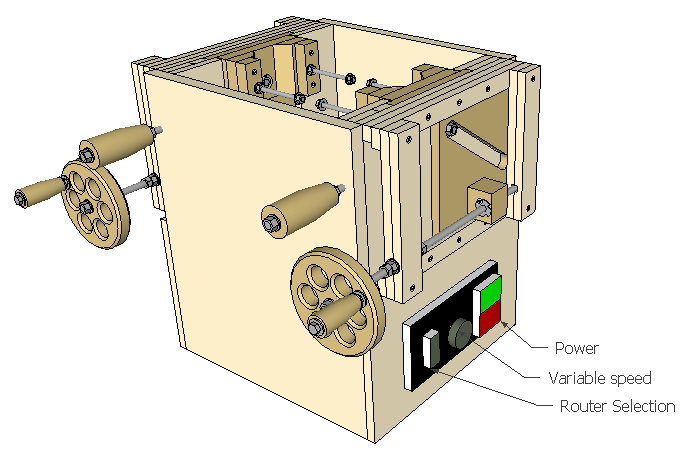 This entire build was constructed with birch plywood. The lifts were mostly 1/2″ plywood and everything else is 3/4″ plywood. If you look at the concept image you can see the two smaller handles are inside the front panel. I had to drill out 3/8″ holes and insert a t-nut from the inside. This is a handy design John used in the lifts. By twisting the handles you are tightening the router carriage. Just a slight amount of pressure locks these lifts pretty tight. The back and side panels are simple rectangles. With everything cut to fit I just screwed it all together. The resulting cabinet is perfect size to sit right on top of the dust collection port I built into the table saw station. Anther thing I like about the size of the cabinet is it still allows me some space around it to store my pushsticks and other table saw junk that I use. 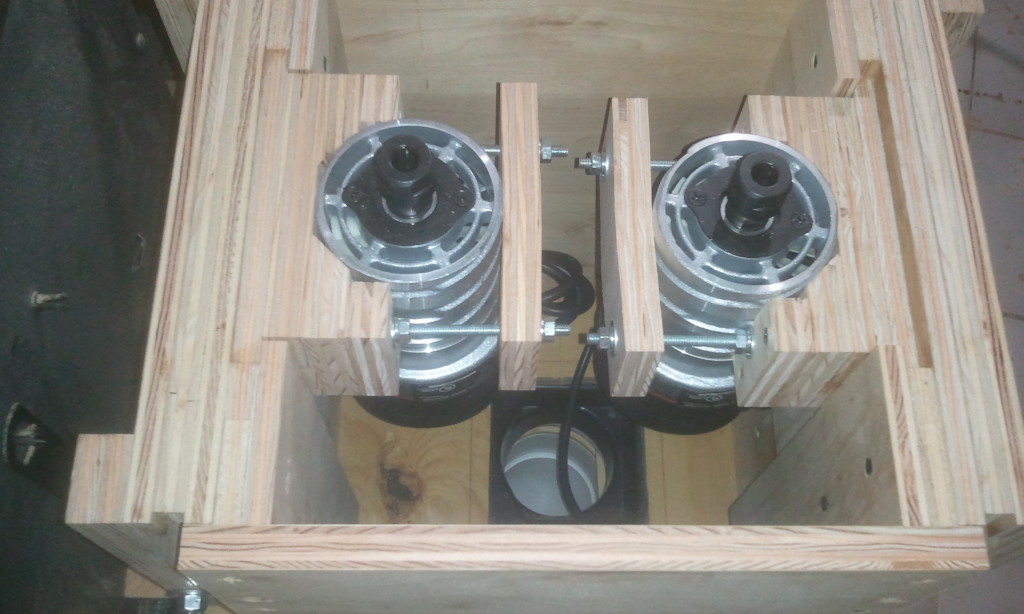 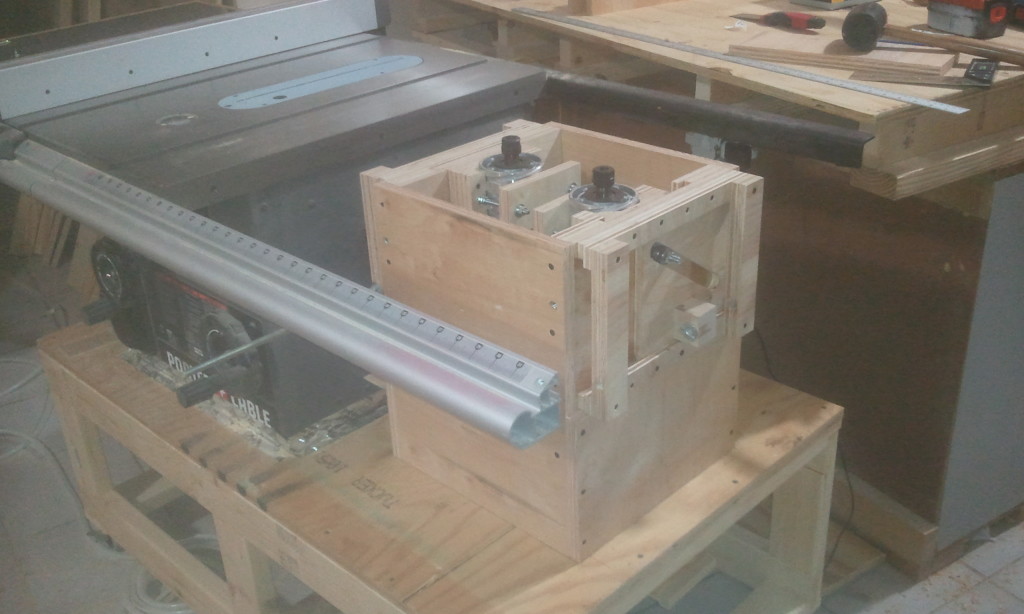 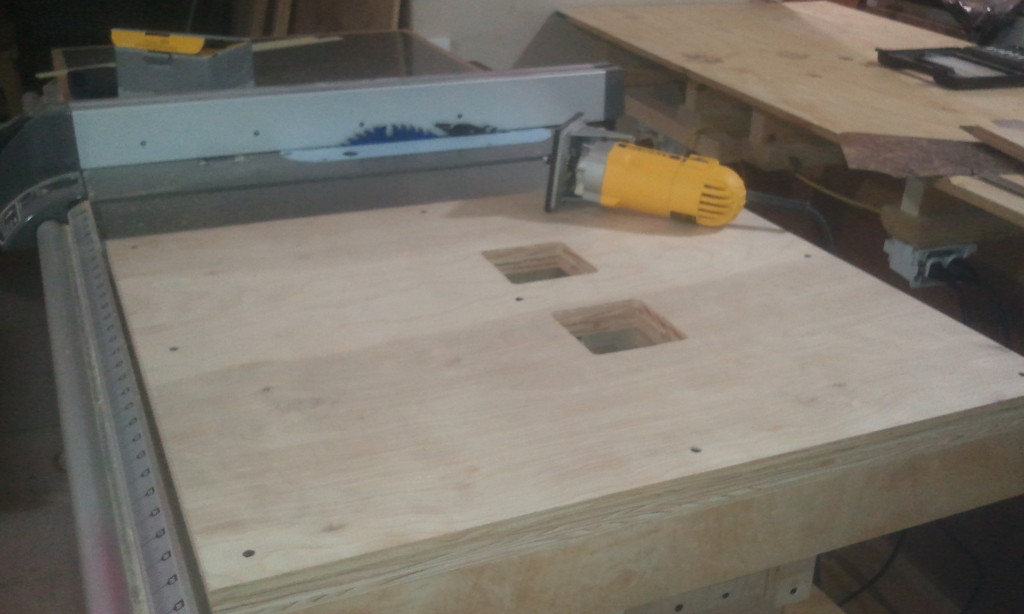 As you can see I chose to screw down the top layer of plywood. Something was telling me not to glue it down. This will allow me to replace it down the road if needed. In the picture above you can see that I added a frame below the table top. This is just a pocket hole frame that was pocket hole screwed to the bottom of the table top. It gives a lot more support and also provides a mounting surface. You can also see that I already had 2 holes cut. Both layers of plywood needed a hole cut slightly larger than the routers because in their top most position they were a little proud of the top of the lifts. After these were cut I adjusted my old insert plate template to fit the new insert plates. The new plates are 5″x5″. I cut 8 of these plates for future use. 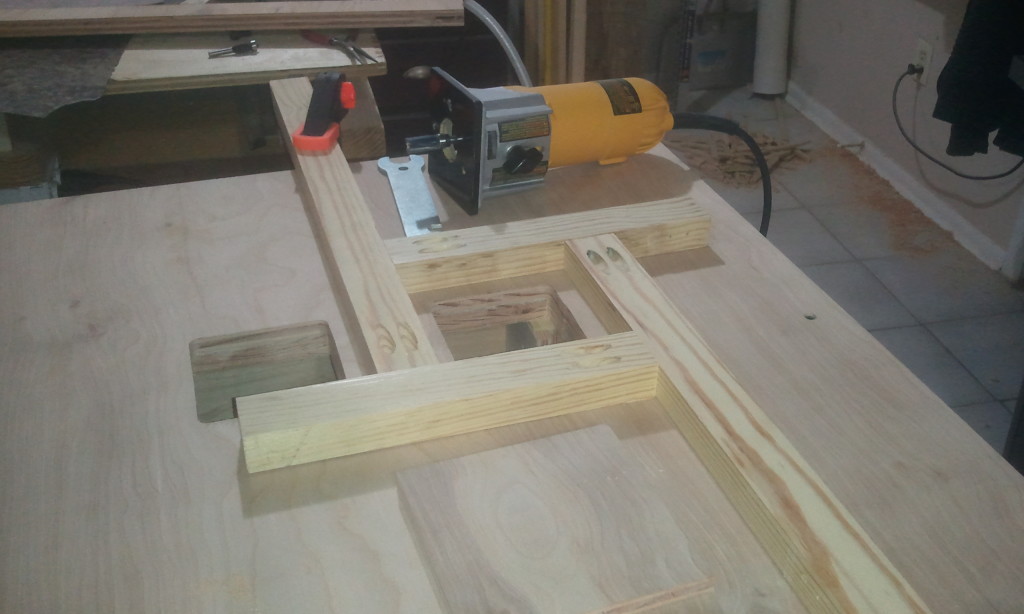 The electrical gave me problems on this build. Not because it was complicated but because I made several stupid mistakes. Luckily nothing bad happened but I caught myself hooking up wires backwards multiple times. Electricity is something you need to be safe with. Check your work. And then double check your work. I also added a variable speed control (black knob in the picture) I initially made a small box and panel to the right of the cabinet. I also made some ugly but functional cranks. John made some nice wheels for his. I went with a simple arm and handle. Very little effort is needed to lift the routers so you don’t have to use anything incredibly strong here. This is proof of how well this router lift design works. 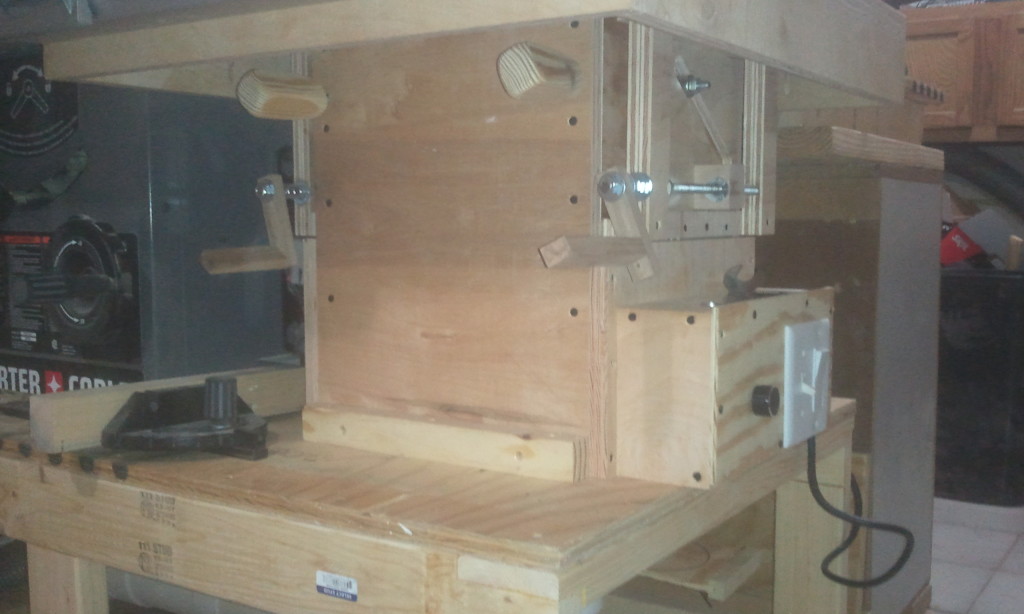 Immediately after I took this picture I decided the electrical needed to be moved. It was too convenient for me to bump into and accidentally turn on one of the routers so I moved it to the front of the cabinet. To secure the cabinet to the base I just used a scrap piece of dimensional pine and screwed it to the cabinet and to the base. At this point I spent some time in SketchUp to design a fence. I had no clue what I really wanted or needed regarding the fence. So what do you do when you are in a state of design block? You look at a few Canadian woodworking genius websites; woodgears.ca and ibuildit.ca.

On woodgears I found that Matthias used a router in his table saw wing as well. The fence he designed was on the right side of the router. This allows your work piece to be pushed across the bit with you in the same orientation as if you were using the table saw. It also allows independence from the table saw fence as it is positioned with two lock down knobs. Another thing I noticed is that the length of his fence isn’t that long. ibuildit.ca is where the plans for my router lifts came from. On John’s router table build he added a second hole behind his router fence for extra dust collection. In the fence he made a dust channel to connect the back dust port to the router bit. This makes for excellent dust collection. I took a bit of inspiration from both sites and came up with this. 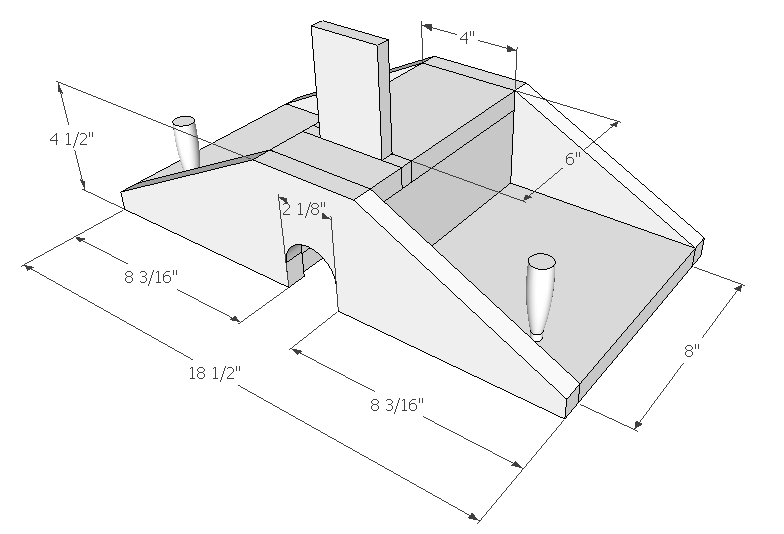 I chose a smaller fence than what you typically see on dedicated router tables. Mainly because I want something that will be easy to remove if I need the extra surface area to run the table saw. The piece sticking up in the middle is a blast gate to close off the back of the dust channel. And because it does have a dust channel I can open the blast gate and move it to the left router and lock it down. This will allow me to utilize the right router opening as extra dust collection. The entire fence can slide as needed and is locked down with two screw down handles. I did change my blast gate design slightly. Because I already had the fence planned out in SketchUp the build went extremely quick. 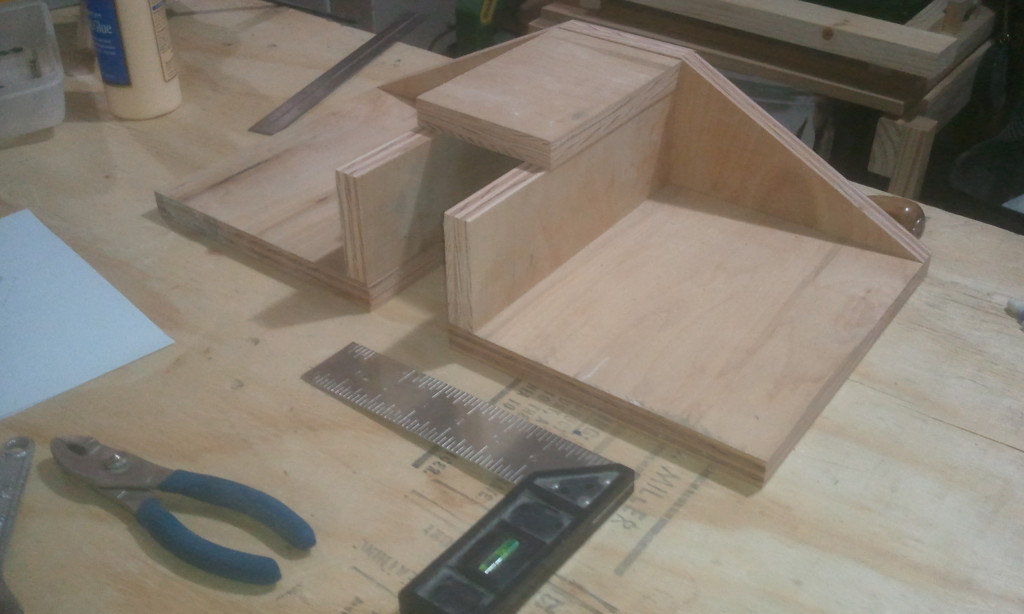 To cut the front and back tapers I used my table saw jointing jig. I traced the first layout and just lined up the rest. This has proven to be a handy little jig. 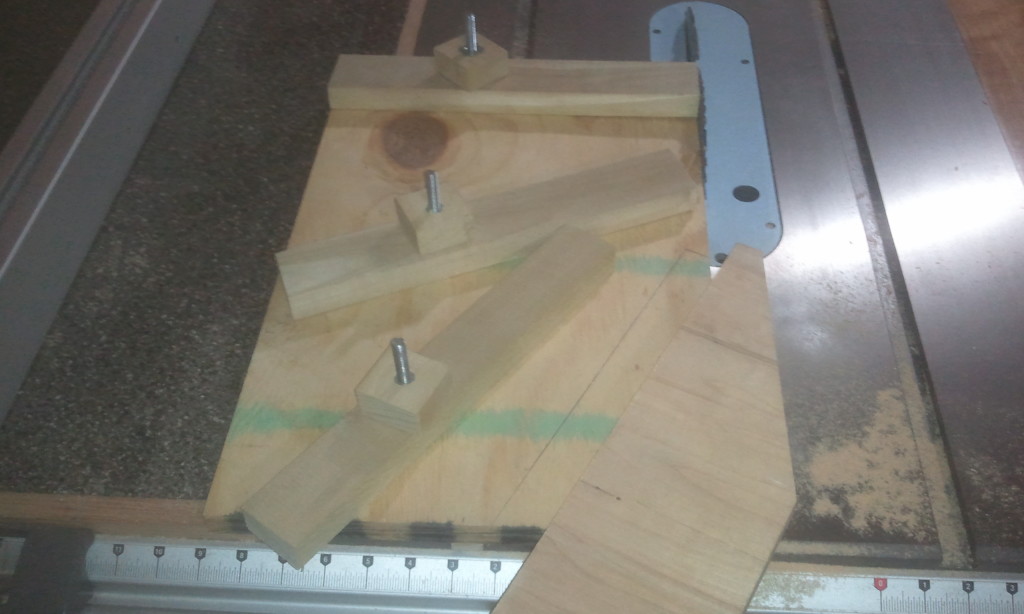 The screw down handles were made by drilling a 5/16″ hole in the end grain of a small piece of pine. I tapped the hole to 3/8-16tpi and glued in a piece of leftover threaded rod. To seal off the entire project I applied several coats of lacquer. After I waxed the entire surface I was anxious to try it out. The dust collection works flawlessly. I have never used a tool that has dust collection as good as this router table does. Regardless of what side I was using there was very little dust on the table afterwards. My table saw station is finally complete. 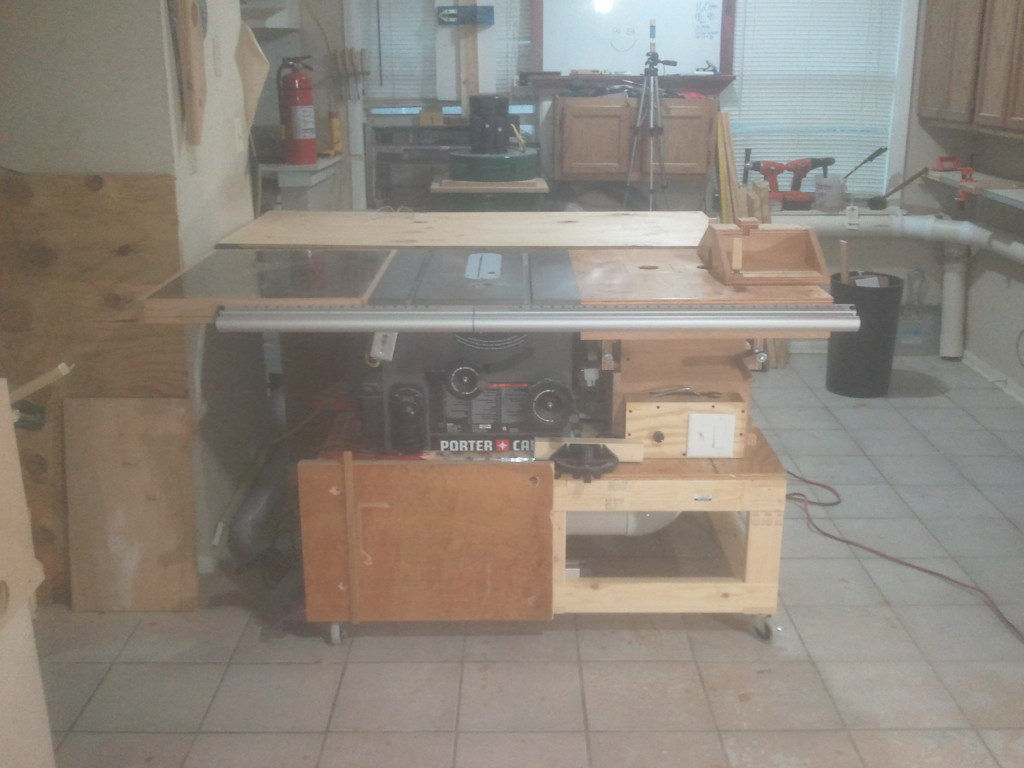 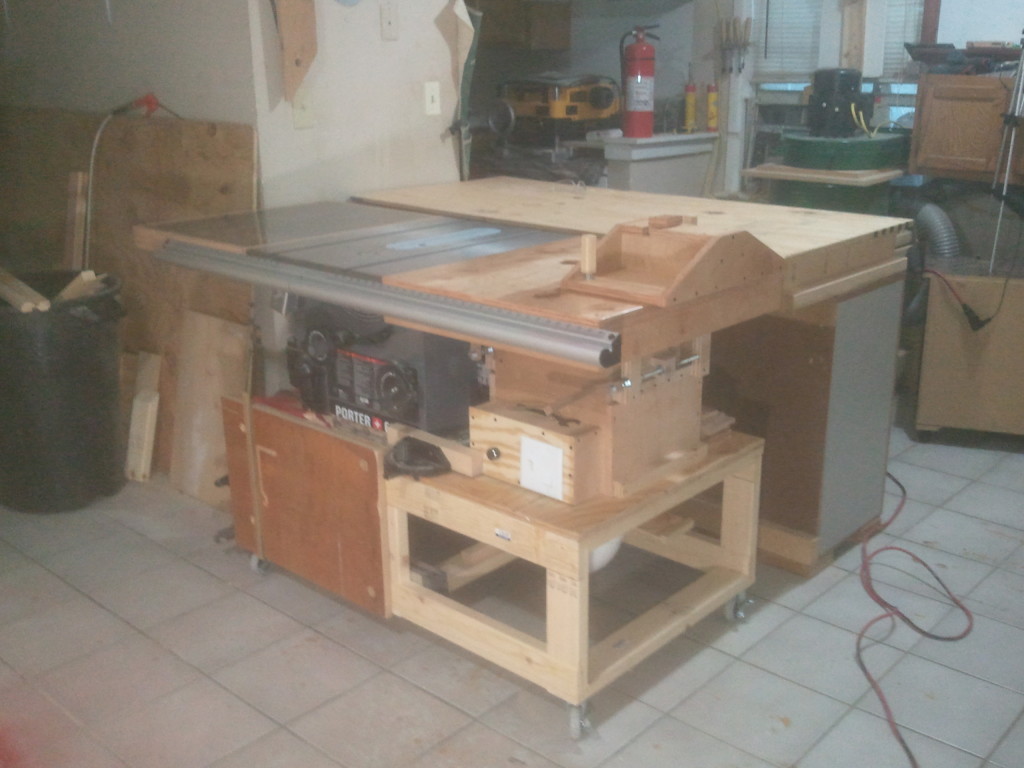 Since making this I have been asked several times “Why two routers?” My answer is “Why not?” I have always wanted a dedicated round over station and having two routers allows me to do so. And at $39.99 for a 2hp router with good reviews the price was inviting to purchase two. All together I have less money in the plans, both routers, and the material for the build than I would have had in just the Bosh router I had chosen. For anyone looking to build their own router lift I say go for it. You will probably end up with a better lift than a production model.

Here is a video demonstrating the router table followed by a LONG video covering the build.