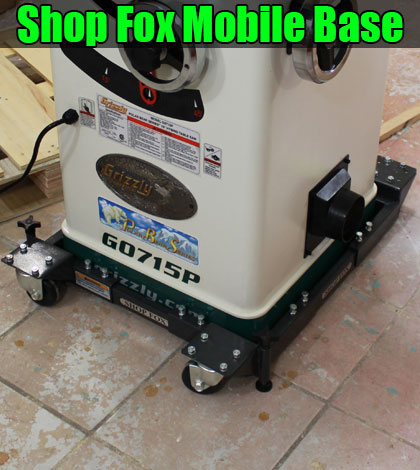 The Grizzly table saw I just purchased is a hybrid saw with an enclosed cabinet. The cabinet of the table saw sits directly on the floor as a stationary unit. It does not have any casters so I had to buy a mobile base for it. Mobility is a must in my shop. I was going to get a Harbor Freight mobile base as it has many good reviews online but I figured I would go ahead and get something that was recommended by the saw manufacturer. Grizzly recommends their Shop Fox brand mobile base. I say “their” because the Grizzly and Shop Fox saws are nearly identical and are both sold by Grizzly so without any research I’m assuming they are the same company. Not positive but just an observation.

And here’s all 34 pounds of the base neatly packaged in it’s box. 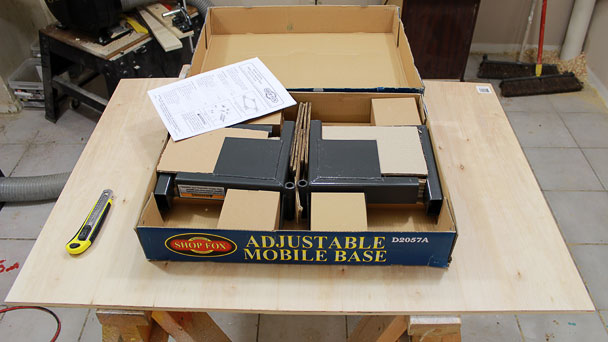 Each caster is in it’s own smaller box. One of my fixed casters had a washer broken in the box. I looked at the assembly of the caster and didn’t think lack of this spacer would affect the operation so I didn’t bother trying to get a replacement from the manufacturer. 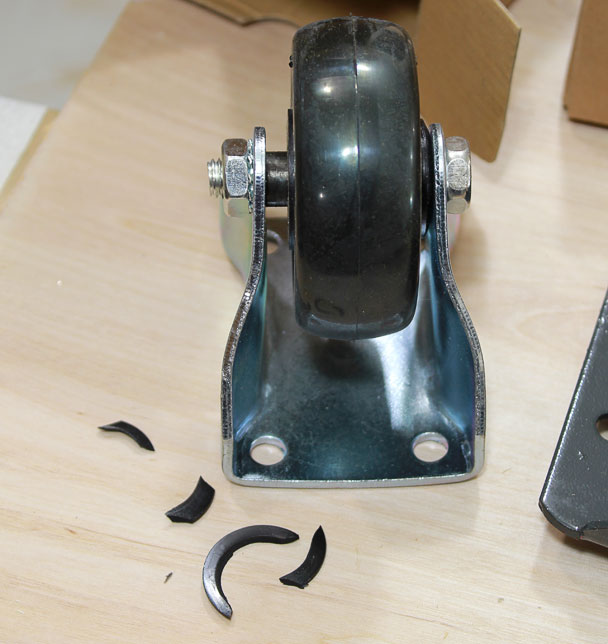 Here you can see the difference between the front and back brackets. The back brackets hold the stationary casters and you have the option to orient them in either direction. I chose to mount mine front to back in relation to this picture. This is also the direction that is recommended in the instructions. 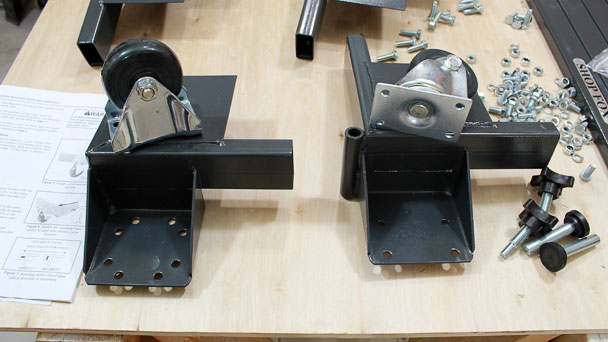 Space is TIGHT with the back two bolts on the stationary casters. A little note of patience is even in the assembly instructions.

I used needle nose pliers to locate these bolts. 4 bolts per caster. 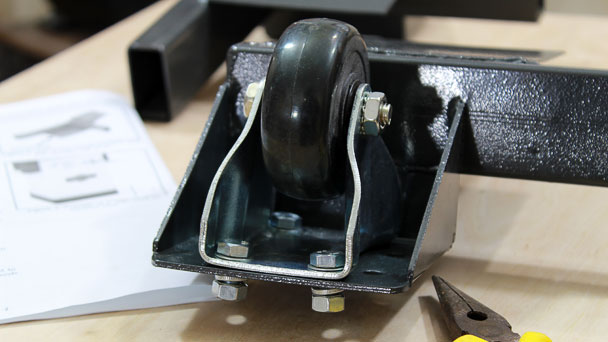 The rails are held in the brackets via two bolts on each end. There are 16 of these bolts that require a lock nut to be installed first. This was a job in itself as the lock nuts are pretty tight. 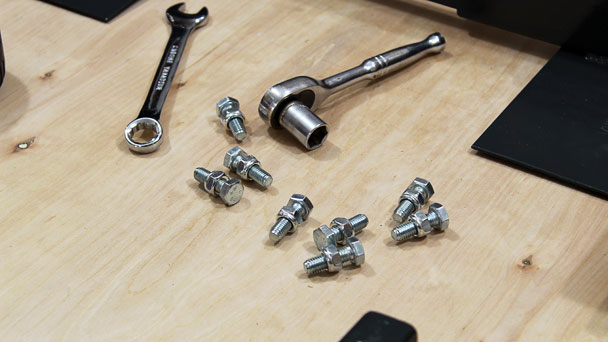 Here’s the initial assembly. I had to stop here and wait until my saw arrived the next day to adjust it to it’s final size. 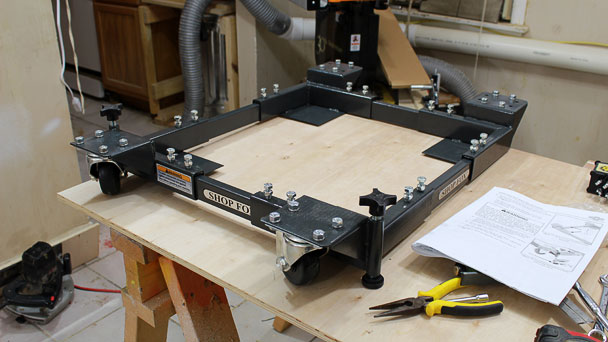 The saw is locked in place by two screw knobs in the front that lower a pin to the floor. This pin has a magnet on the top so that it will not drag the floor when the weight is transferred back to the casters. On one of my pins I noticed quite a bit of slack between it and the sleeve. I thought this would make the saw wobble when it was in the stationary position but I later confirmed that this was no issue at all. False alarm. 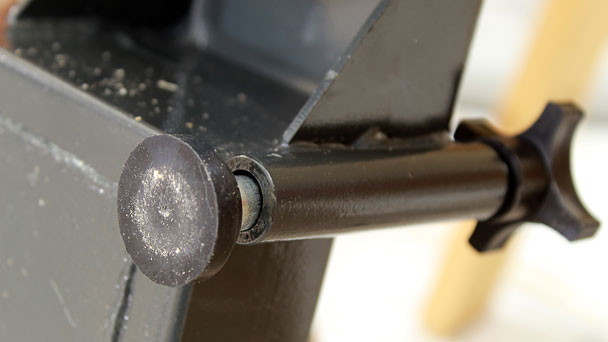 And finally the base all adjusted to my new table saw. This Shop Fox base is rated to hold 700 pounds and my table saw weighs in at 416 pounds. The mobile base performs well in both the mobile and stationary positions. I have no affiliation with Grizzly or Shop Fox but here’s a link to where I purchased mine:
http://www.grizzly.com/products/Heavy-Duty-Mobile-Base/D2057A 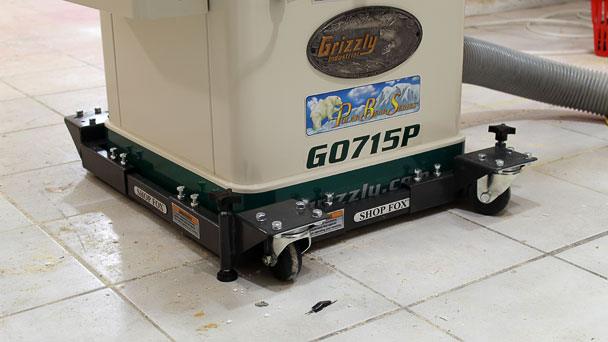 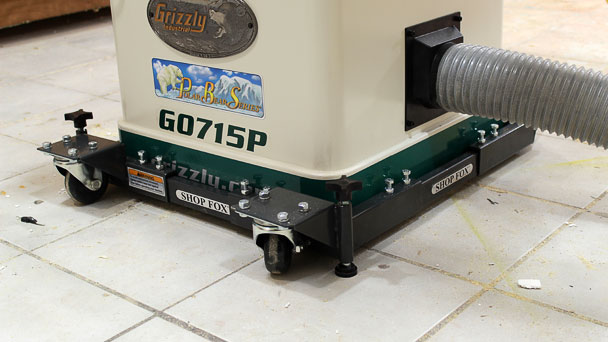 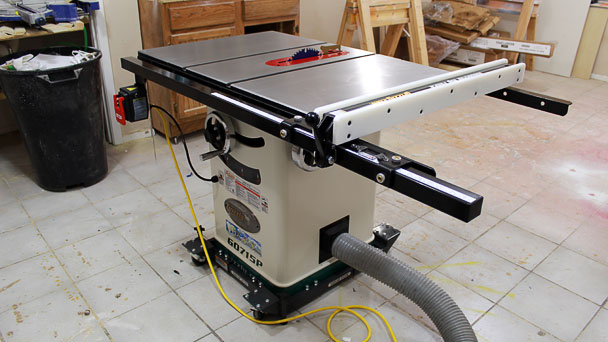