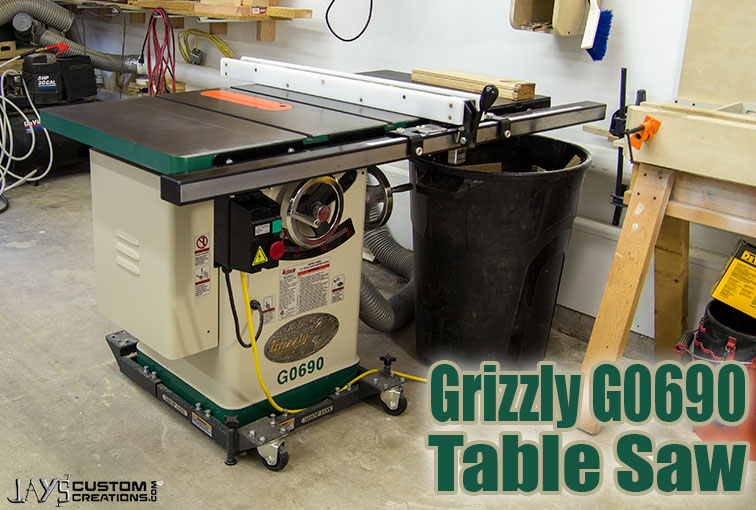 My most recent, and hopefully last, table saw is a Grizzly G0690. I purchased it back in March of 2014 and after using it for the past six months I feel a little more comfortable talking about it. I wouldn’t call this article a review as I’m not going to cover every little detail about the saw but I will give you my thoughts. I don’t have any affiliation with Grizzly and personally do not care if you purchase this saw or not.

Everyone works differently in their own shop and obviously values tools differently. My view on a table saw in general is that it’s the backbone of the shop as most all projects will pass over the table saw in one way or the other. When I originally purchased this saw I actually had a little bit of a guilty conscious thinking I spent too much money. Not by thinking that this saw isn’t worth the money but from thinking that I can get away with a much less expensive saw. I can, and have for a long time, get away with a much less expensive saw but having saved up enough money to purchase this saw I thought there was no time like the present to make a long term investment into my woodworking hobby.

Purchasing the saw through Grizzly’s website and having it shipped to my door was $1,504.31 in March of 2014. I compared prices online for various other brands and based purely on the specifications listed I couldn’t find a better deal. Packaging was great and there were no damaged parts upon arrival. 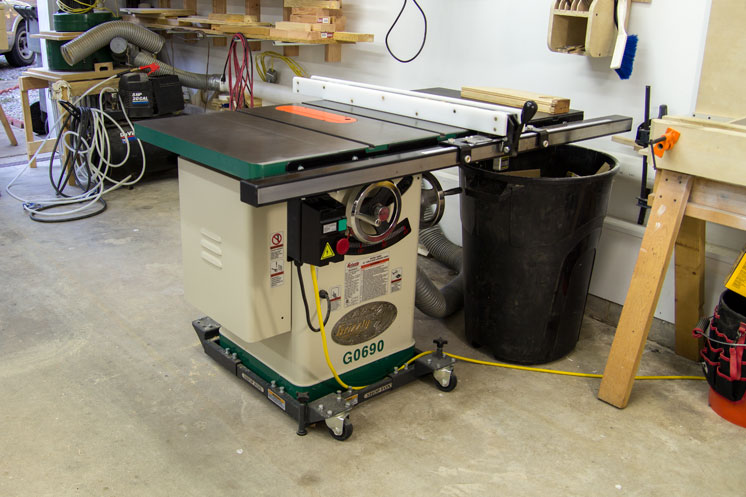 On the back of the cabinet there are three hooks. I think these are for the push stick and the two included wrenches for changing the blade. But honestly, they are pointless in my opinion. Most everyone is going to build an outfeed table that will greatly restrict access to this area. I’ve never used them and forgot they were there until I took pictures for this article. 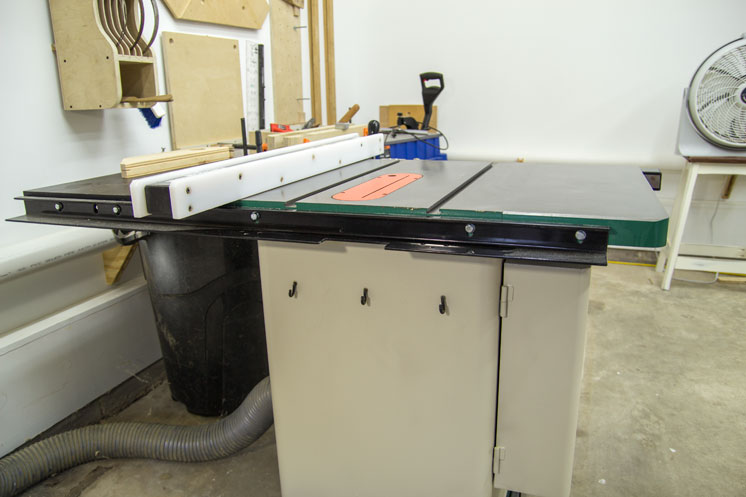 The back rail has two sets of three holes for future mounting if needed. I believe these are actually the mounting holes for Grizzly’s folding roller table outfeed support. I have been contemplating making a folding outfeed support of my own and seeing these holes already drilled makes designing an outfeed system a lot easier to attach in the future. 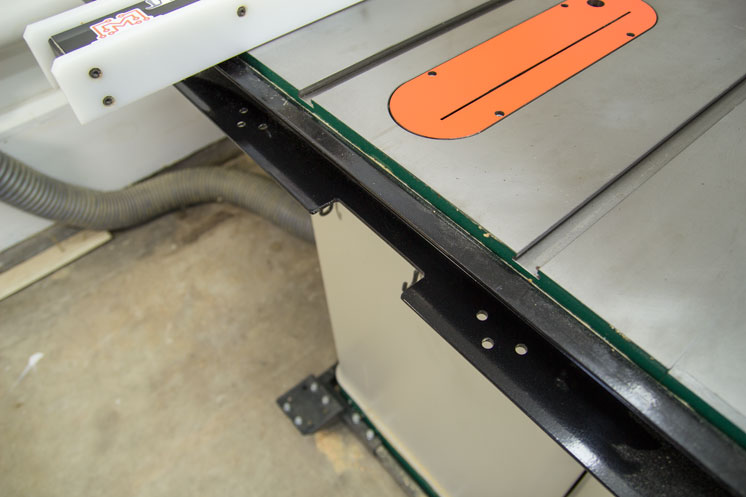 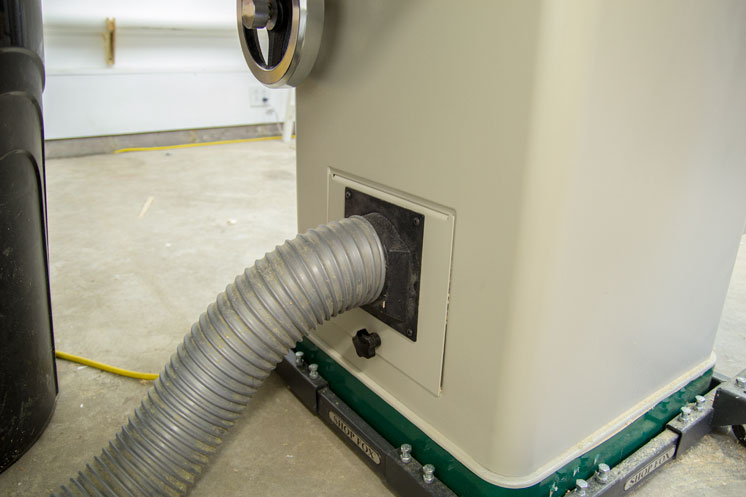 I used to clean out the dust from time to time on the inside of the cabinet but after realizing that it never gets any higher than the level in this picture I just leave it alone now. 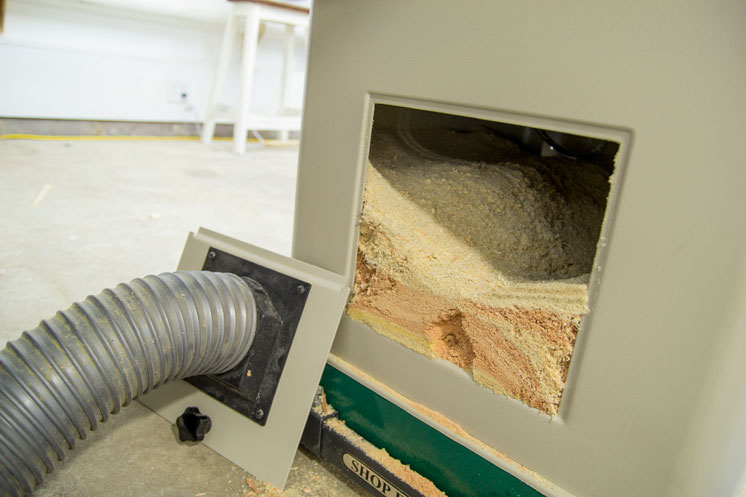 Onto the other side of the cabinet you can see the motor access door. Believe it or not, it’s a door that allows access to the motor that’s behind it. 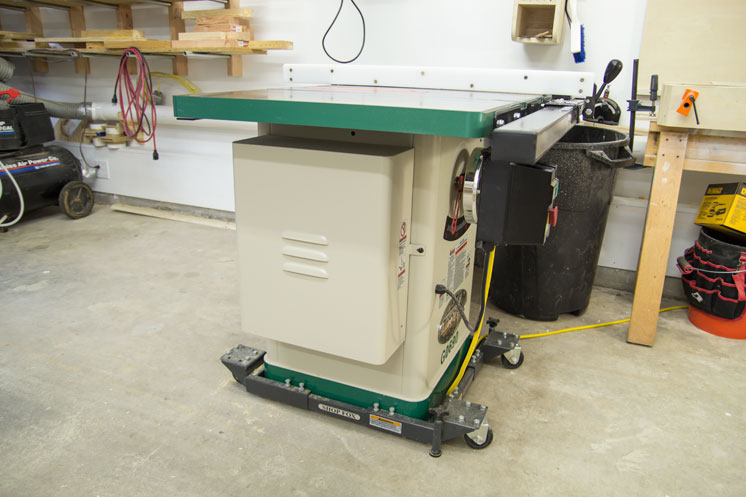 The only negative thing I can say about this saw is barely worth pointing out. When I received the saw I had one missing piece. It was the star knob bolt that secures the motor access door. For something this small I didn’t bother contacting Grizzly customer service. I just found a bolt in my junk drawer that had the same thread. It does the job just as well. 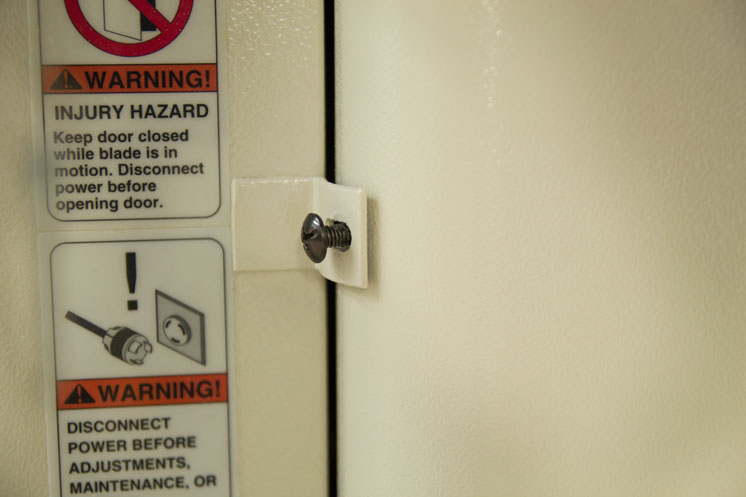 Here’s another angle of the dust level. Like I said, it never gets higher than this so I don’t worry about it. I have read some complaints on the internet about dust collecting in the bottom of the access door but I don’t see the big problem. I’m very pleased with the dust collection on this saw and if a little bit of dust want’s to hang out on the access door than I’m OK with that. 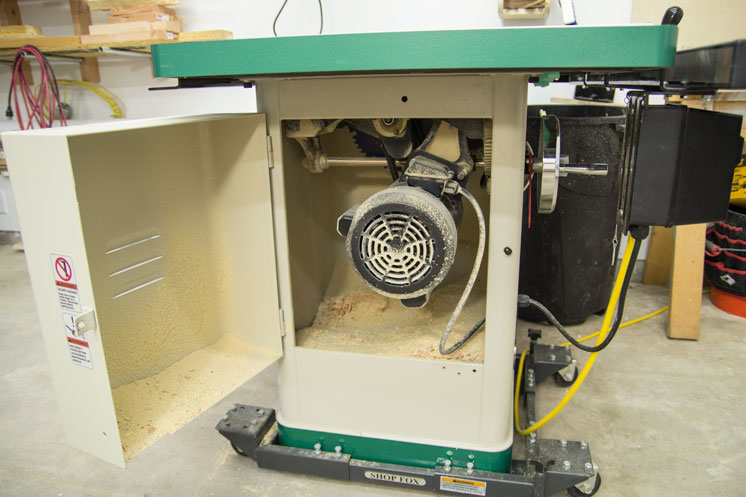 The motor is a 240V 3hp Leeson motor that is not convertible to 120V. Not from what I’ve read anyway. I’ve never had any issues with this saw bogging down. It has handled everything I’ve thrown at it. I believe the most stress I’ve put it through was a 3” thick piece of oak from a salvaged headboard that I ripped in one pass with no problems. 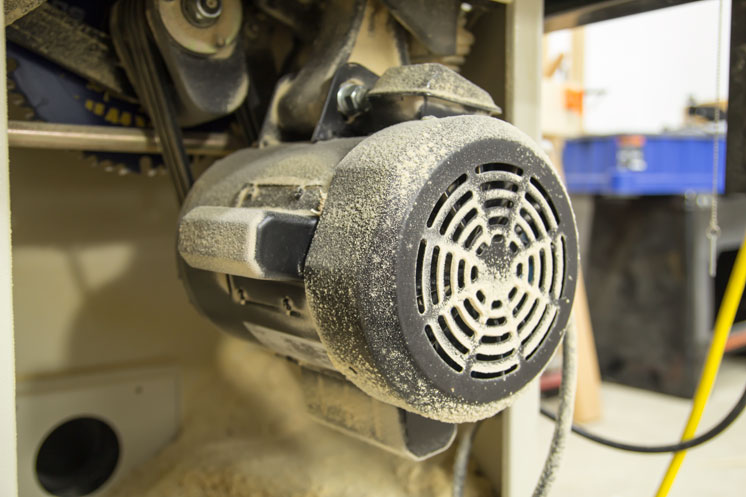 Power is transferred via three V belts. I’ve read that this setup creates more vibration than the Grizzly 1023 series serpentine belt system but I’ve not had an issue with vibration. I would definitely say the G0690 has very low vibration so the 1023 must have extremely low vibration. 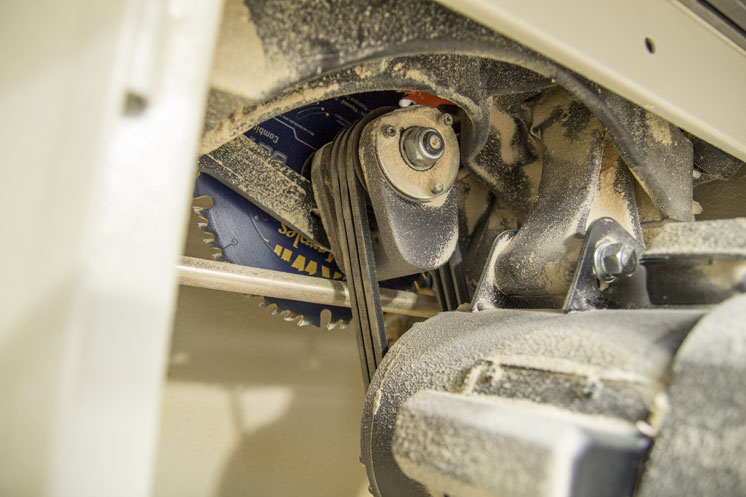 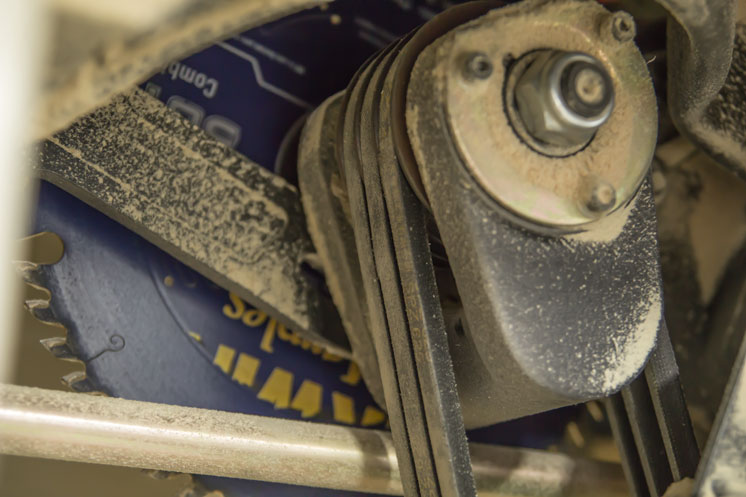 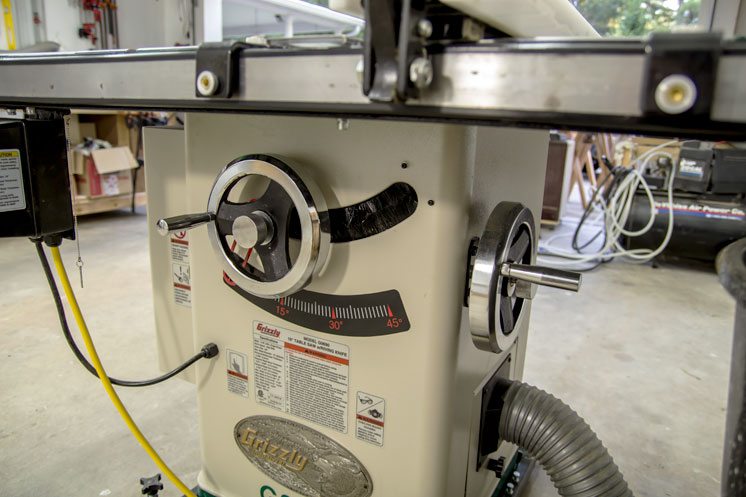 Also on the front of the saw is the magnetic switch. In case of a power outage while using the saw the switch will turn itself off to eliminate a potentially dangerous situation if the power comes back on while you are unprepared. It’s conveniently located under the front rail so I can use my thigh to bump into the large red button and turn the saw off if I want. The green start button is recessed slightly making accidentally turning the saw on less likely. During the initial assembly I took the cover off of the switch box and replaced the cord with a 20′ cord. 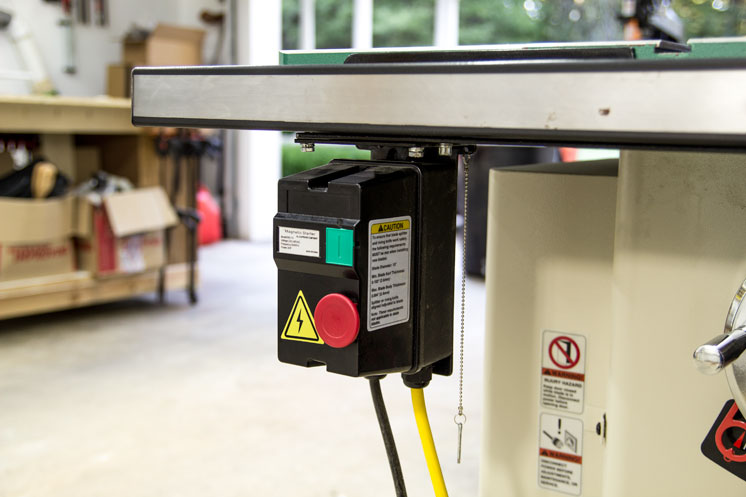 The fence is a T-squre style fence. It’s my first time using this style fence and I love it. Once calibrated it’s 100% trouble free and easy to use. The nylon (I think) glides make adjustments a breeze and the locking mechanism keeps the fence in place every time. The front rail is a continuous steel tube that allows 29-1/2” of rip capacity to the right of the blade. I’ve also read that if you slide the front and back rail to the right by one bolt hole position you can instantly add several inches to the rip capacity but at the cost of losing most of your left of blade capacity. That is something I will probably do down the road. 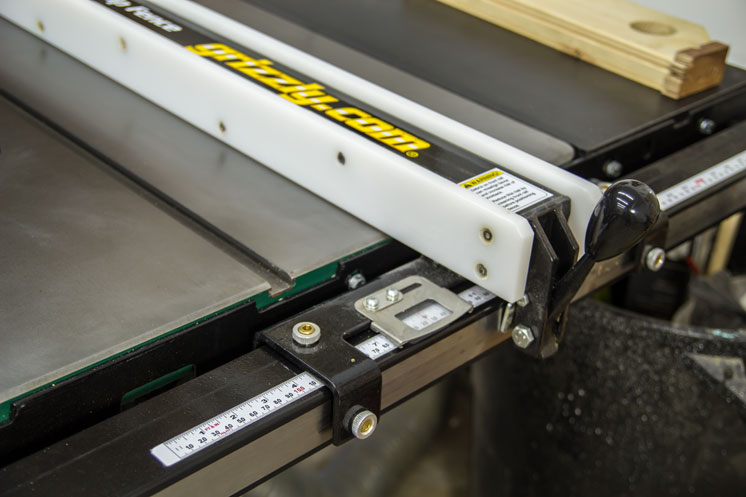 The fence itself measures 39-3/8” front to back on the white plastic. 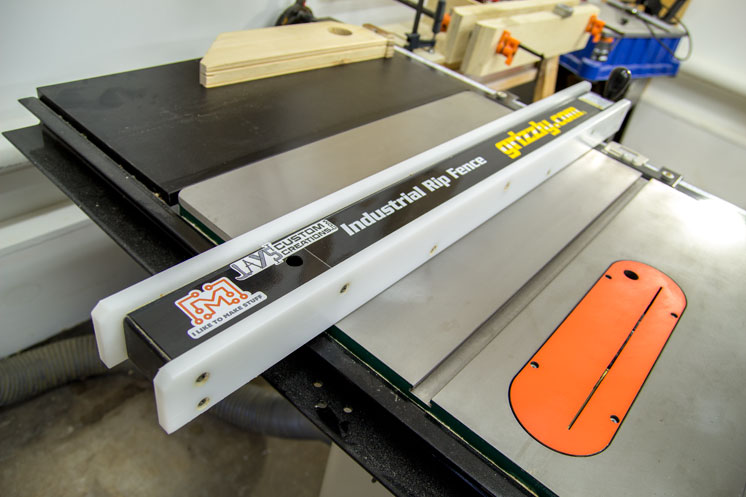 The saw has two cast iron wings that give a total cast iron surface area of 27” x 40”. There is also an included laminated auxiliary wing for one side. I’ve never seen the need to require this extra wing to be cast iron. 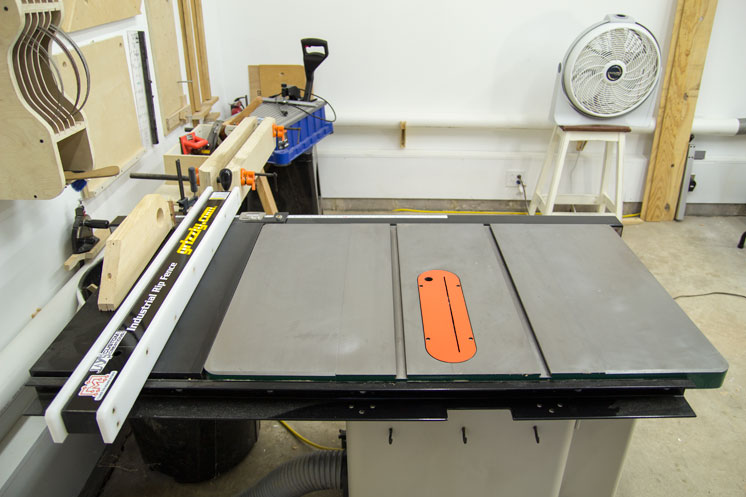 The saw came with two insert plates. One regular insert and one dado insert. Both inserts have had a little bit of their finish rub off onto the wood during certain cuts. Because it’s not a crazy amount and everything that gets cut will eventually get sanded I don’t see that as a big deal. 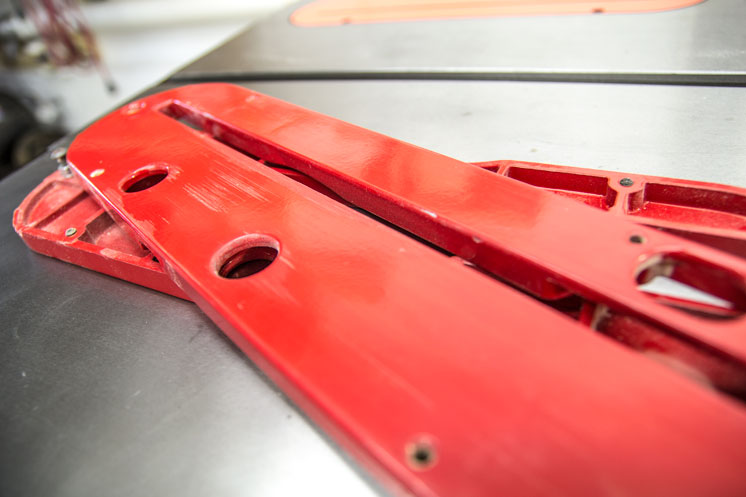 I also purchased a zero clearance insert for the saw. I primarily use the regular insert as it seems to do better at creating a down draft for dust collection. The zero clearance insert is only used when I know my offcuts will be thin and I don’t want to have any smaller pieces falling down into the cabinet and binding up somewhere. 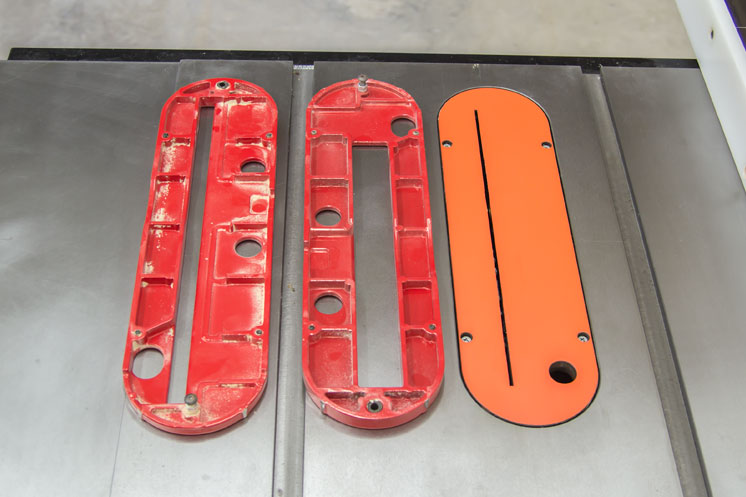 The bottom green ring on the cabinet is actually just a sticker. I thought it was paint but when I tried to get the saw into my mobile base for the first time the sticker peeled in a couple places where the bolts scraped. Cosmetics is an area I couldn’t care less about when it comes to power tools so this doesn’t bother me. I am using a Shop Fox mobile base that is recommended for the saw. It does the job pretty well. 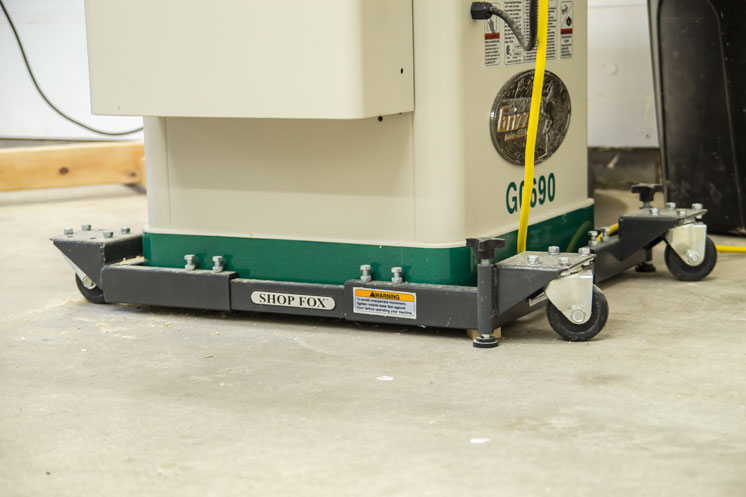 Should YOU Purchase it?

Overall, I’m very pleased with this saw. If I had to do it over again I would definitely buy it again. This saw hasn’t given me any reasons to doubt it over the past six months and hopefully I will be the last saw I purchase.