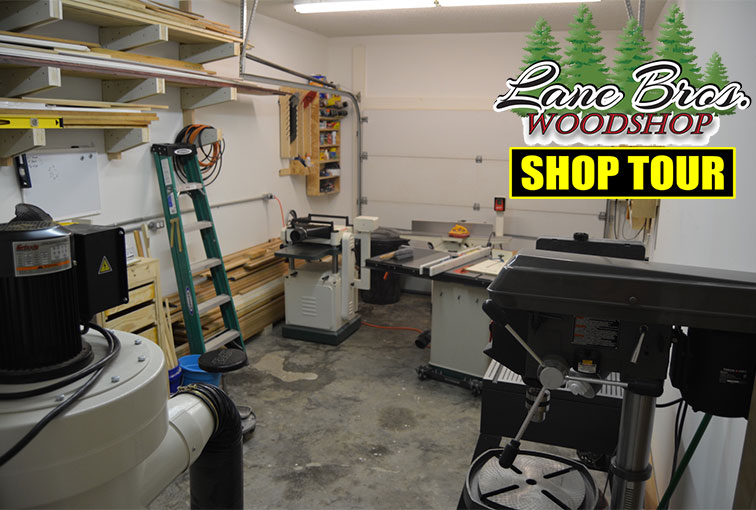 I’ve been following Matt Lane on YouTube since his first couple videos and really like the progress he has been making. Recently I asked him if he would be interested in giving us a detailed glimpse into his shop. If you aren’t already subscribed to his woodworking channel you can do so by clicking here. Thanks for taking us on a tour of your work space Matt.

Here on the first French cleat wall I have my sanding station (Links: video, build article, plans) along with my Jay Bates drill charging station, which has lots of miscellaneous screws and stuff like that piled on the top, along with my Kreg Jig and some craftsman cordless drills, that I also intend to replace pretty soon as well. The last thing on the wall is my nail gun cabinet (Link: video) with all my Porter Cable nail guns; there are nails in the drawer below and on top you’ll see my miter gauge and my Incra I-box jig. 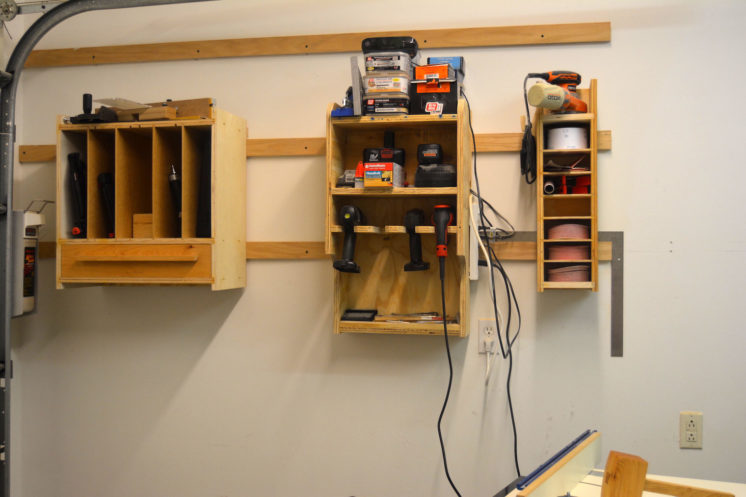 Up against the back door,or the “fourth wall” is my Grizzly 6 inch wide joiner. 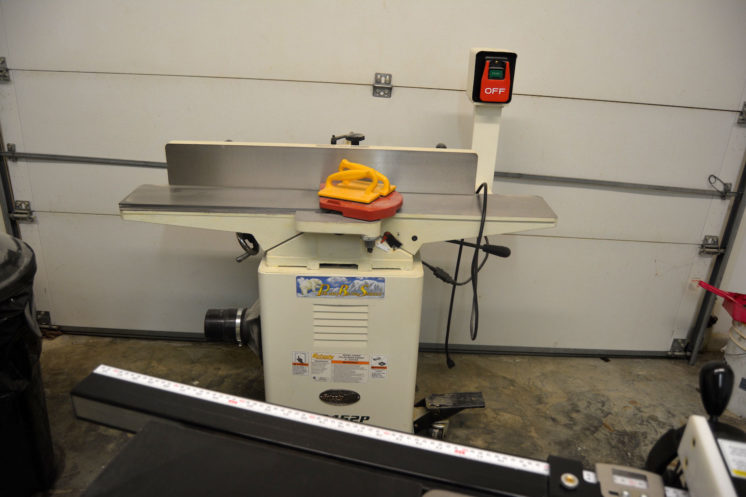 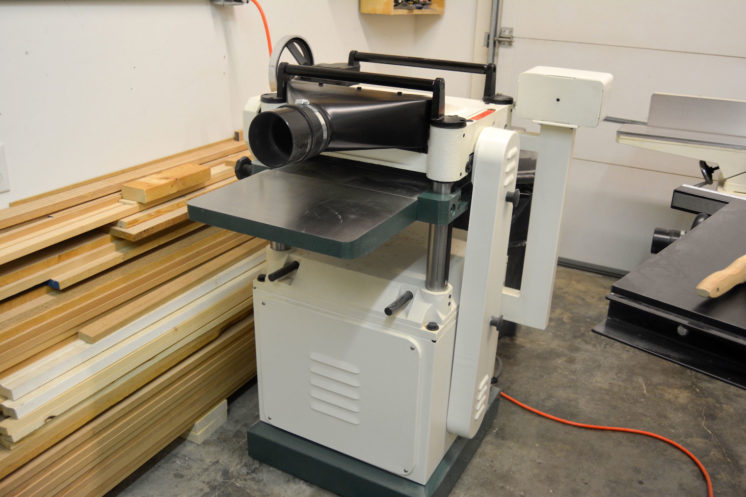 And my Grizzly table saw. You can see that my rip fence is a little bit of clutter catch along with a lot of other crap in my shop. 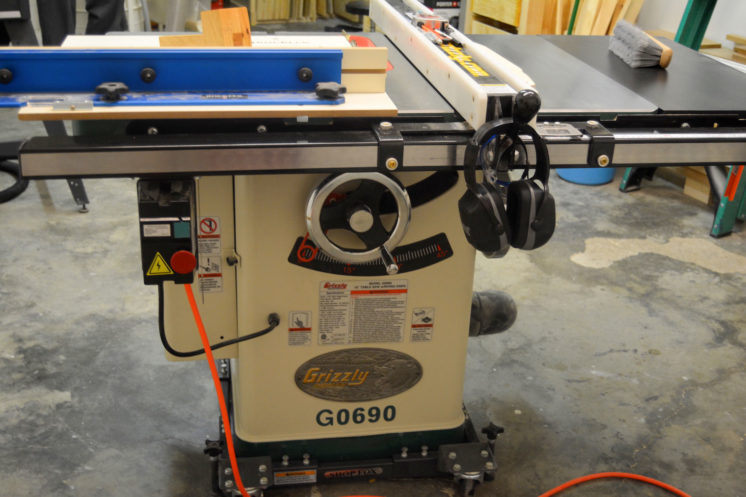 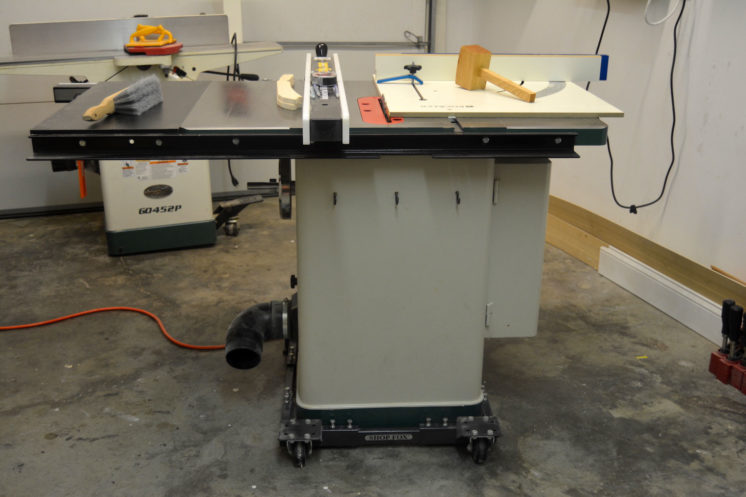 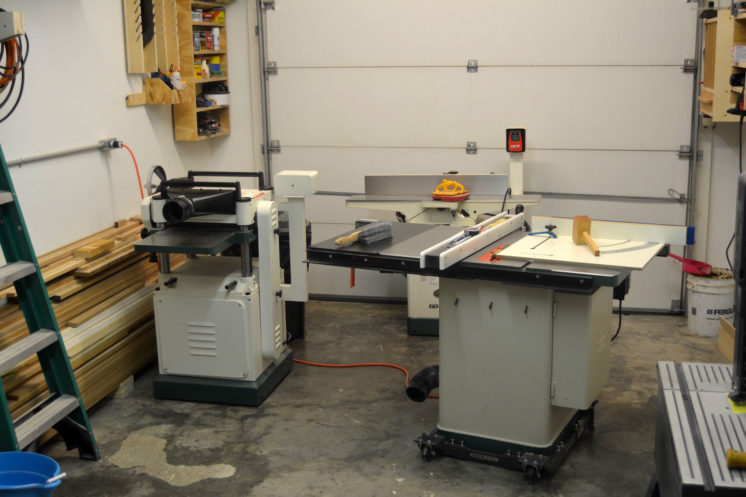 On the other side of the shop, at the end by the door, you’ll see my Jay Bates finishing cabinet which was actually the first shop project I ever built. I also have my saw blade holders that I just recently built (Links: video, build article) and a glue bottle holder that I basically built one night out of boredom with some scrap OSB that I had laying around. You’ll see that I have more than just finishes in the finishing cabinet. I have a lot of crap in there that shouldn’t be in there because I have yet to build a proper space for it. I still have quite a few shop projects that I need to do in the near future. 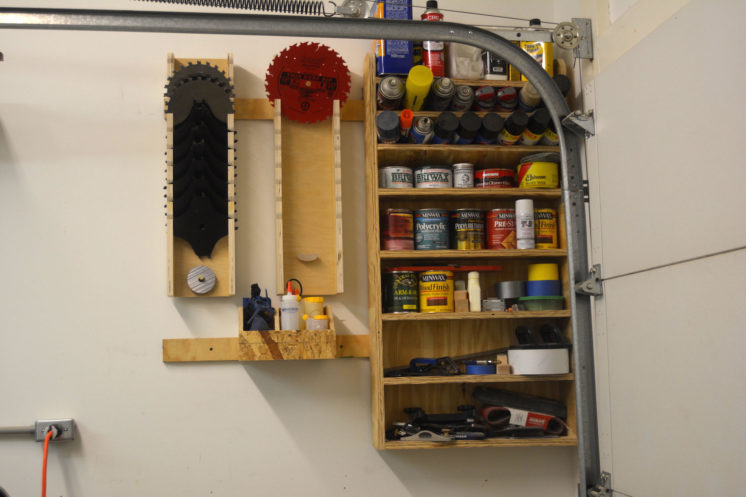 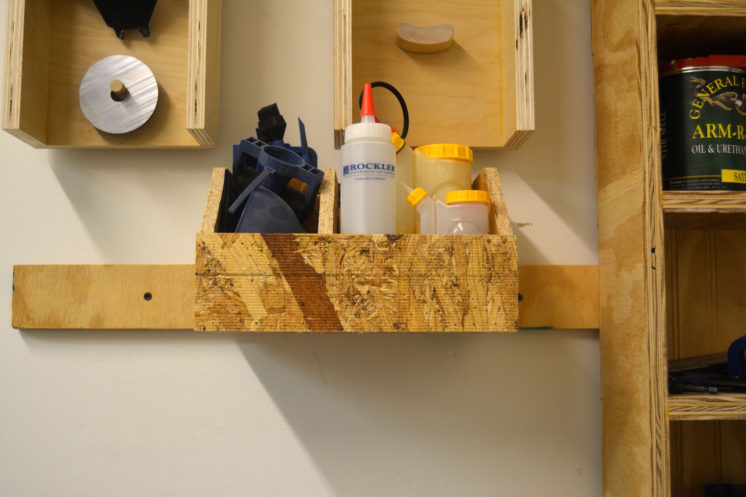 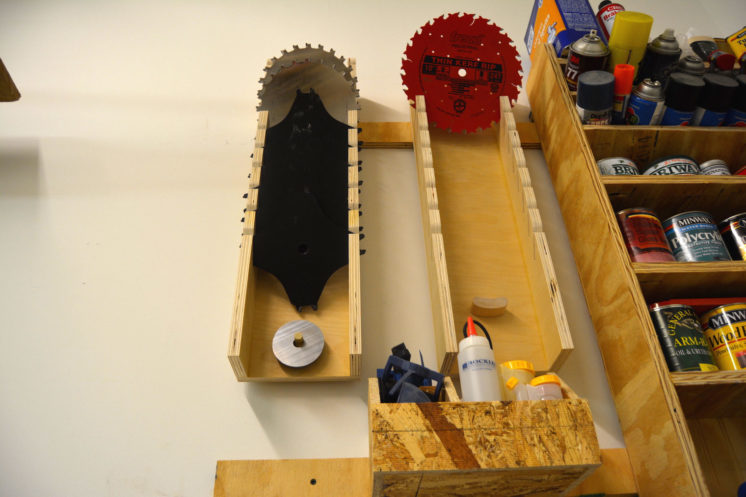 Directly below that storage, in the floor, you’ll see a stack of alder, along with some other scrap pieces of wood, basically stuff that wouldn’t fit on my lumber rack. 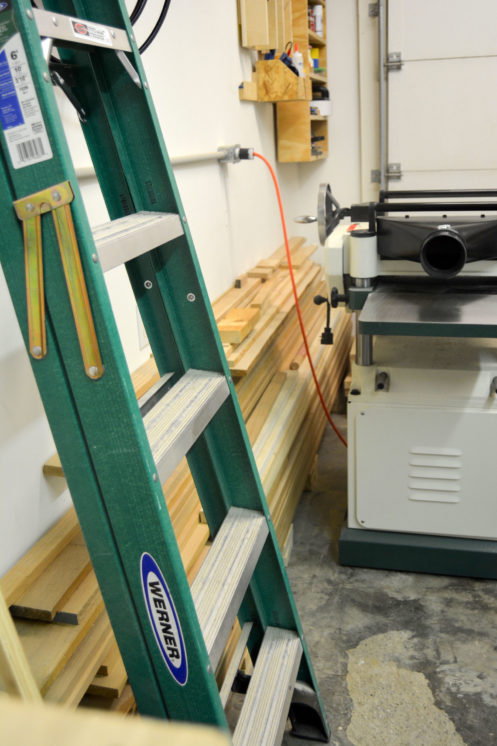 On down the wall you’ll see my lumber rack that I built (Links: video, build article). The bottom shelf has some cherry, on the middle shelf is mostly Red Oak and little bit a White Oak and just some random scraps of molding pieces, and the top shelf has some maple and a bunch of random moldings. 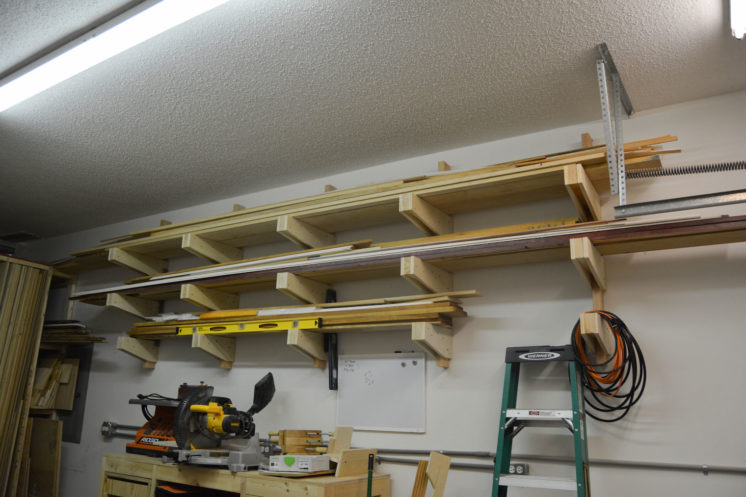 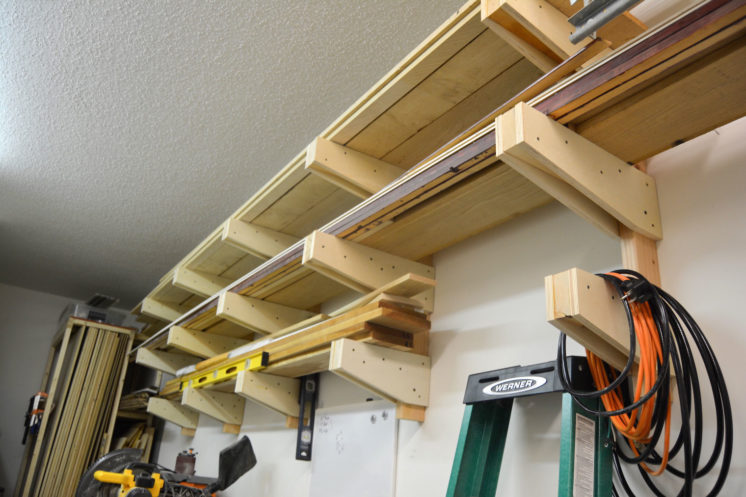 Directly below that is my miter saw station, that to this day I still have yet to finish, even though I started it quite a long time ago. 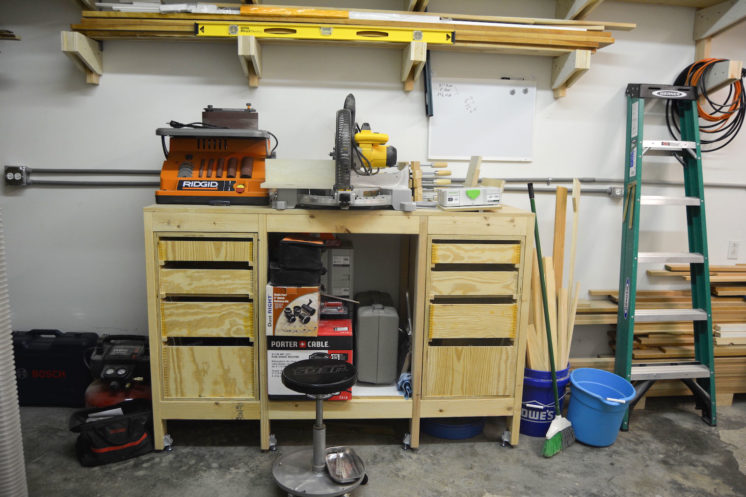 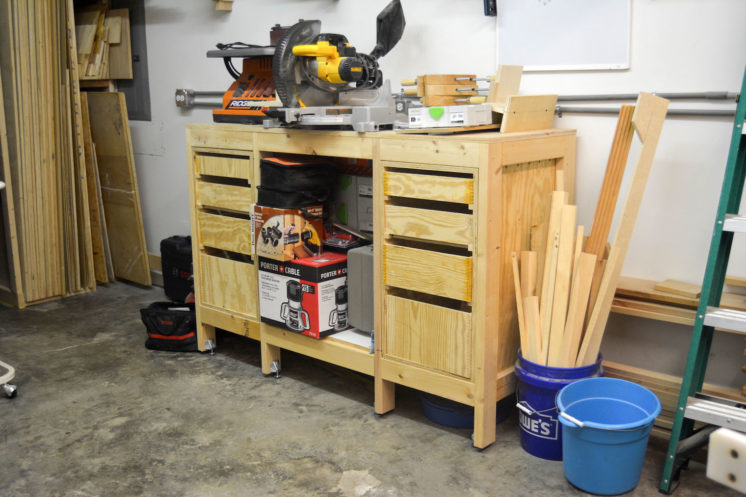 Currently it doesn’t even have bottoms in the drawers. 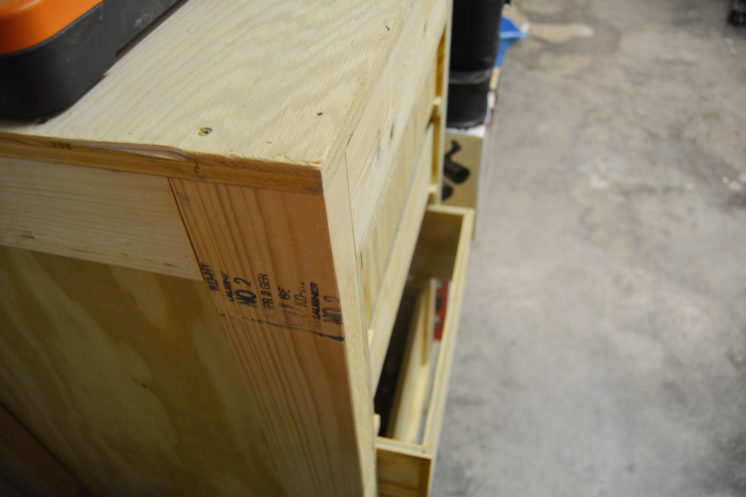 For now I have my Rigid Oscillating Sander on there too because I haven’t built a spot for it. Directly beneath the miter saw, I originally planned to have dust collection for the miter saw in the form of a shop vac. Hiding under there is my Festool Domino, my track saw, a Porter Cable biscuit joiner, Bosch palm router, there is a 3 1/4 HP Porter Cable router that I bought to dedicated to my Incra LS router table that just hasn’t been delivered yet. 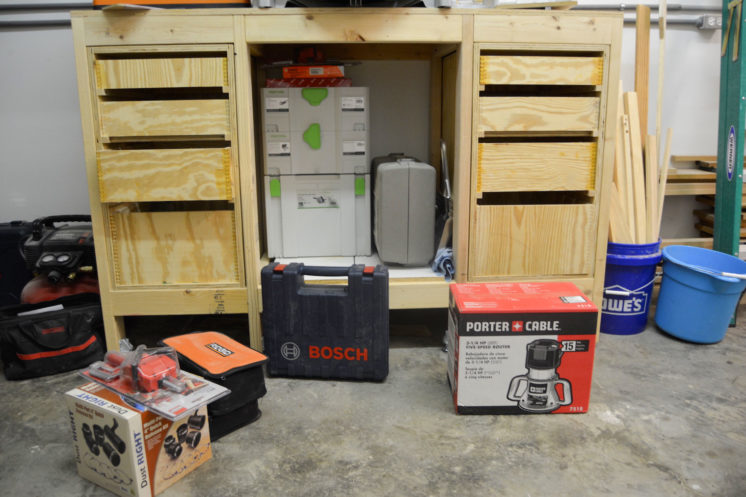 Beside the miter saw station, on the floor, I have a Bosch handheld router and my porter cable pancake compressor. 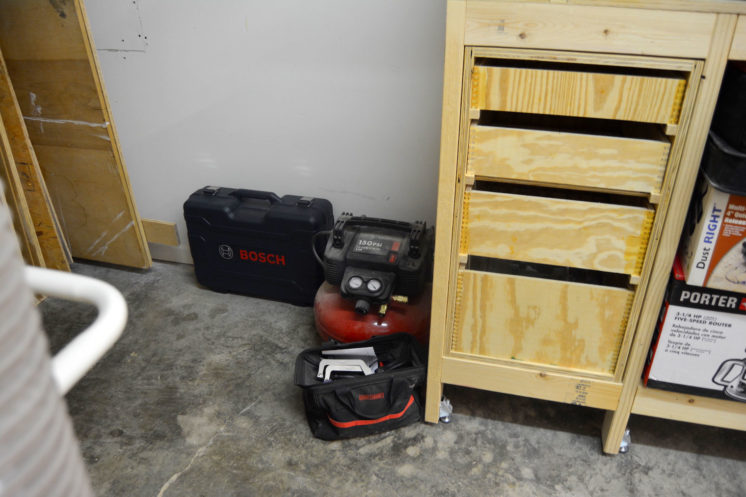 In the back corner I have my sheet goods rack that I built a little while back (Links: video, build article, plans) and some old beach flooring from my old high school gym floor from here in my town. The reason that I have so much wood is due to a crazy craigslist deal. This guy used to own a cabinet shop and retired. He and his wife were basically selling everything that they owned and going RVing across the country, so he needed to sell a ton of wood very fast and very cheap. I was super pumped to be getting all of this wood at such a great price, but there was one problem, the guy lived around 3 hours from me and I had absolutely no way to get it other than paying an exorbitant fee to rent a trailer. Luckily the guy had a trailer (which he also tried to sell me) and offered to deliver it. So that is how I ended up with all this wood (and my wife calling every 10 minutes to make sure the guy didn’t kill me). 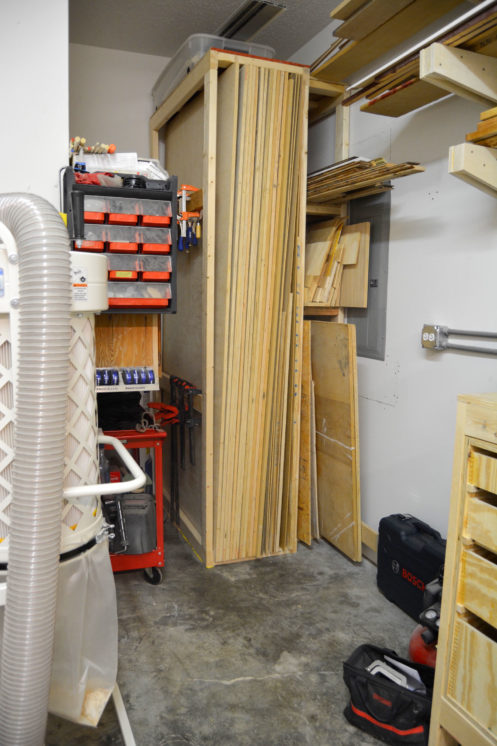 On top of the sheet goods right you’ll see my two track saw guides and a plastic Tupperware container full of a bunch of random drawer slides that I got in the aforementioned craigslist deal. 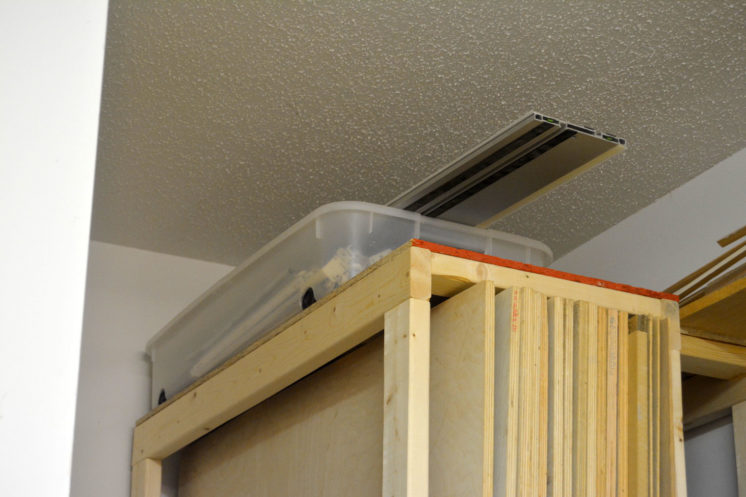 Right beside that on the opposite wall is a small cheap cabinet that I have intended on moving, but haven’t gotten around to yet. It has a bunch of random junk in it as well as stuff piled on top of it. 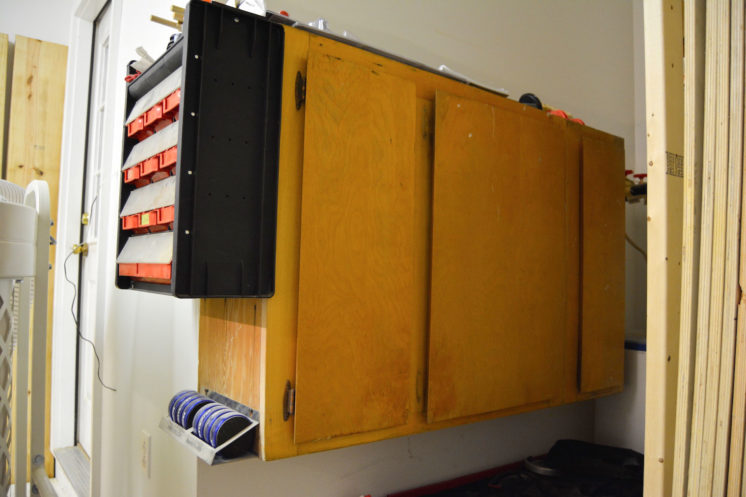 Underneath the cabinet is a small cart that I have for my welder that I bought a long time ago for working on cars not originally intended to do woodwork with. 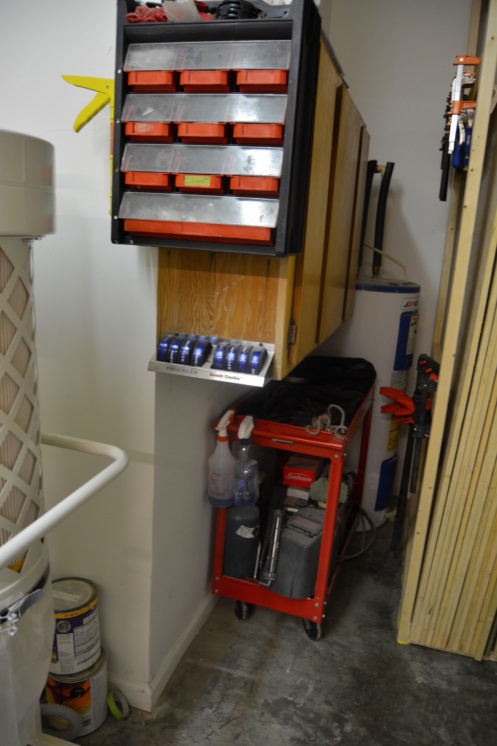 The last thing on my shop is my Grizzly dust collector. 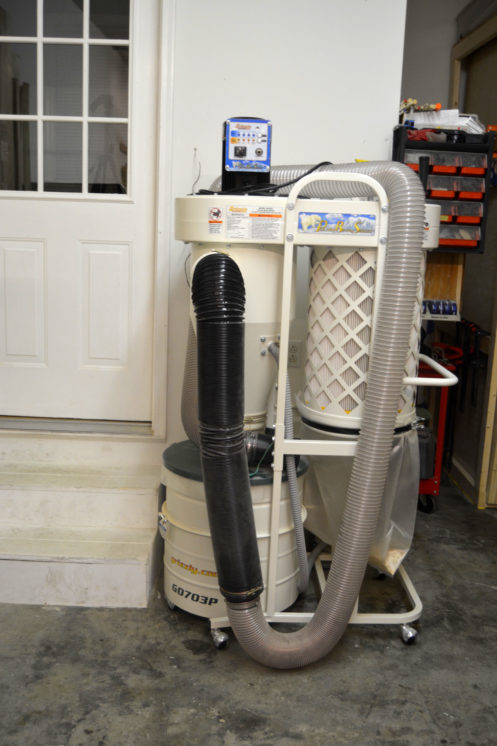 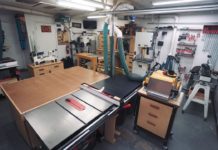 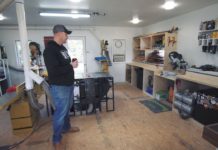 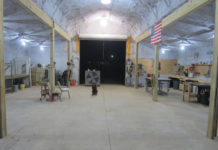