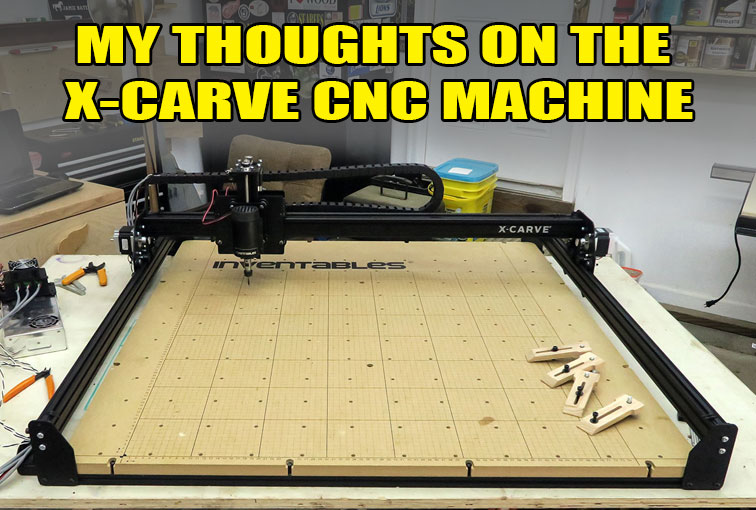 In February of 2015 I had the opportunity to get a free Shapeoko 2 CNC machine from Inventables in exchange for a video with my honest thoughts of the unboxing, assembly, and working process. Since then, Inventables released a newer version of their desktop CNC machine called the X-Carve.

In May of 2015 I ran a giveaway on my website to give away the Shapeoko 2 to someone else as Inventables sent me a fully loaded X-Carve. The new machine was sent to me at no charge with no requirements on my behalf. I was not asked or required to write this article or say anything about the machine. I will not do a review on every detail of the machine as there are plenty of other sources out there for that kind of article and I really don’t like to do those reviews anyway. Instead, the following text is my thoughts and opinions on the machine now that I’ve had it for a while.

I got the 1000mm x 1000mm rail kit which allows a cutting area of about 31″ x 31″. I opted to go with the larger rails as I found the small size of the Shapeoko 2 a little limiting at times. On paper it’s a no-brainer to go large but after assembling it I ran into a problem of where to put it. That’s one thing I never really thought about. 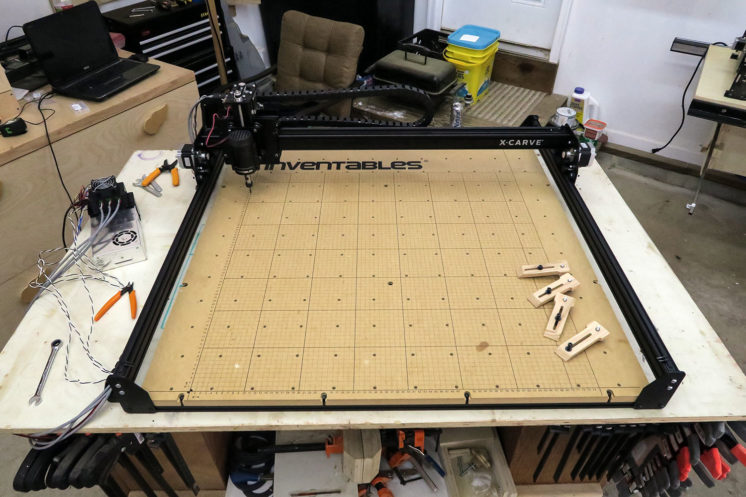 The power supply has a circuit board interface that you attach to it. I liked this as it will eventually cover up all of the 120v terminal blocks on the power supply. 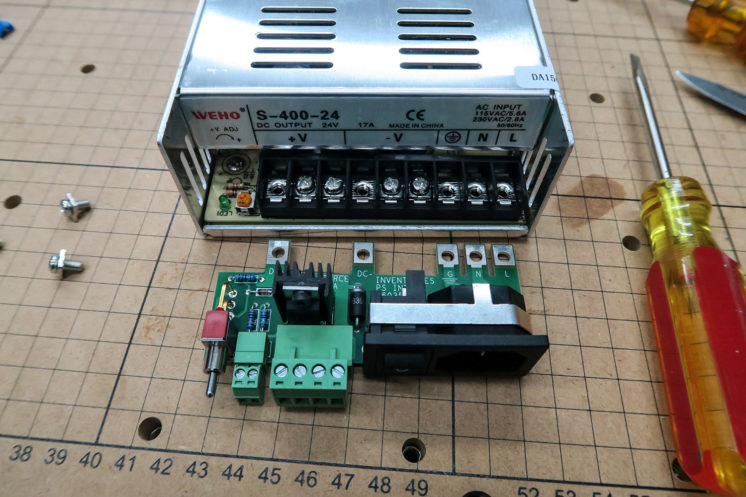 I think the same belts are used that were on the Shapeoko 2 but this time I had a problem with every one of them slipping out of their mounting brackets. I couldn’t get them to hold under normal use so I had to carefully secure every belt connection with two zip ties to get them to properly hold. I read other people having the same problem and their solution was zip ties. The actual tightening system is much improved on the X-Carve over the Shapeoko 2 though. 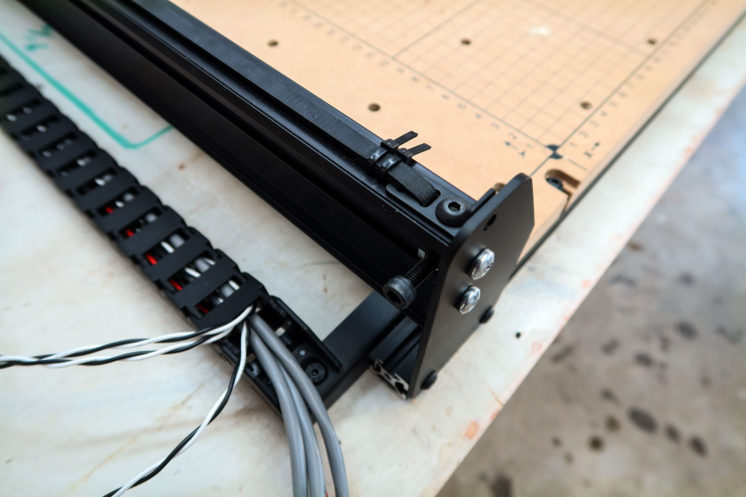 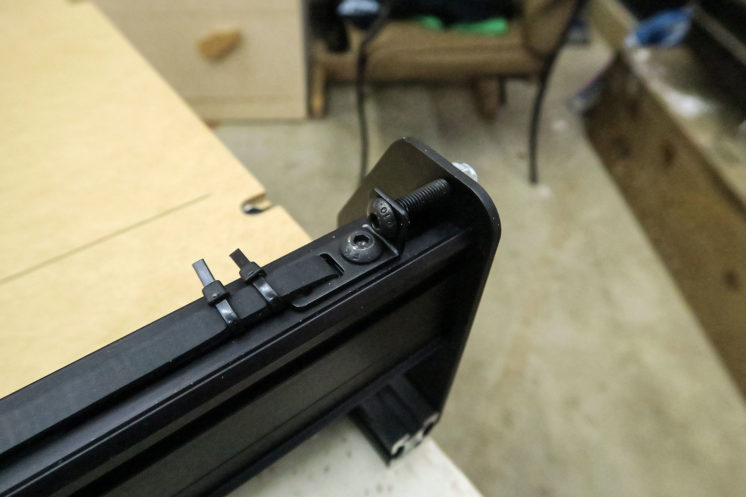 With the help of drag chains and certain holes here and there the wiring from the motors through the machine is very tidy and easy to keep organized. 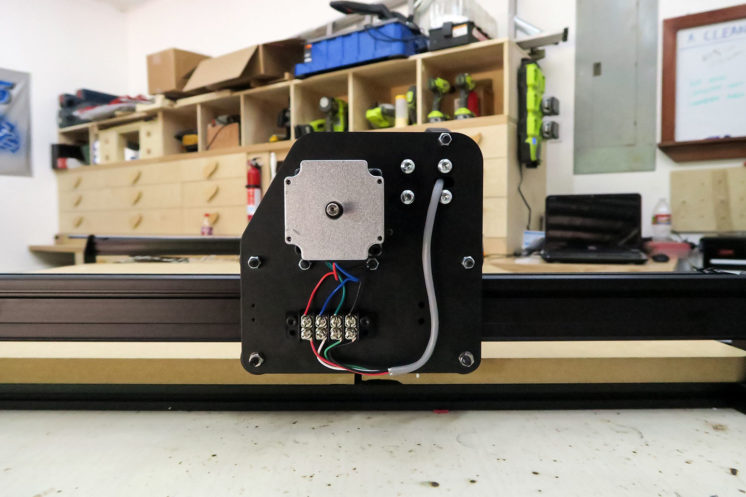 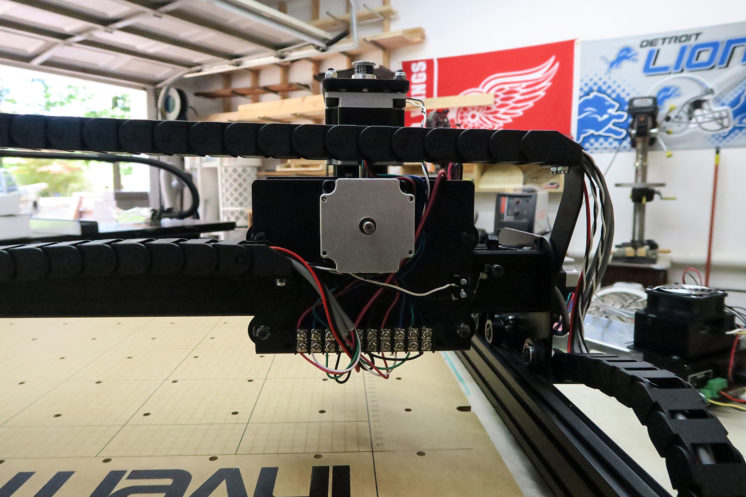 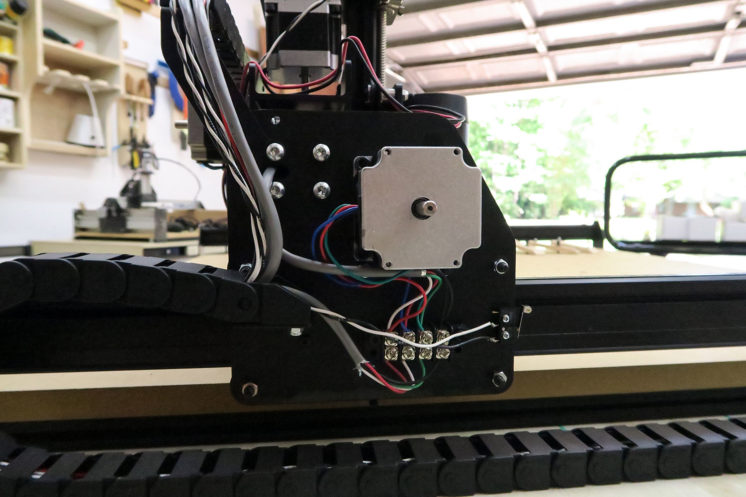 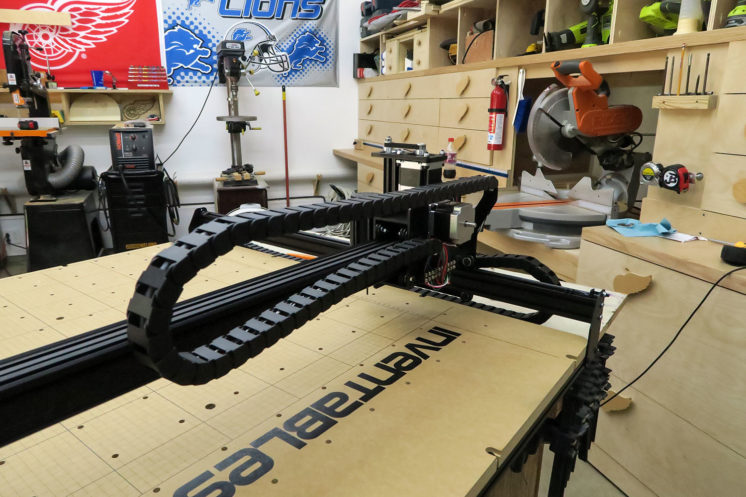 Limit switches were included with my machine but I never used them while using the machine. A little soldering is necessary to install them. I remember installing one backwards due to the instructions and had to disconnect and reattach it after assembly was complete. That was four months ago so they’ve probably updated the instructions since then. I haven’t checked. 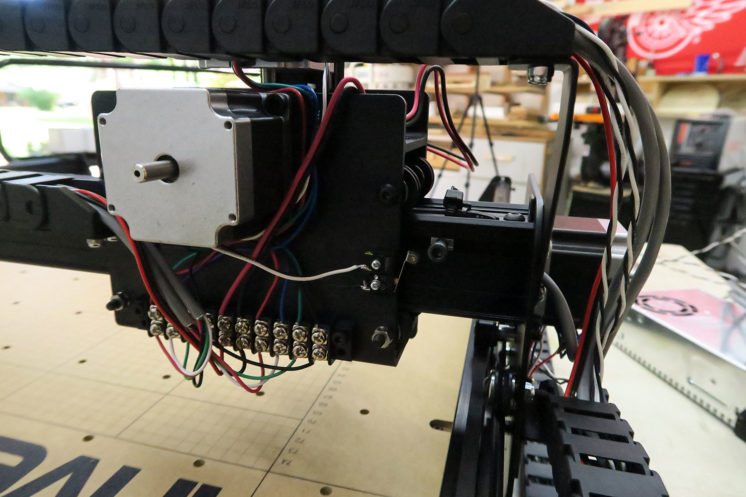 The wiring from the motors through the machine and drag chains is pretty tidy by default but after that cable management is necessary. By simply following the instructions and connecting this here and that there I was left with a bit of a rat’s nest of wires. I ended up using garbage bag twist ties to tie everything together and make it somewhat presentable. 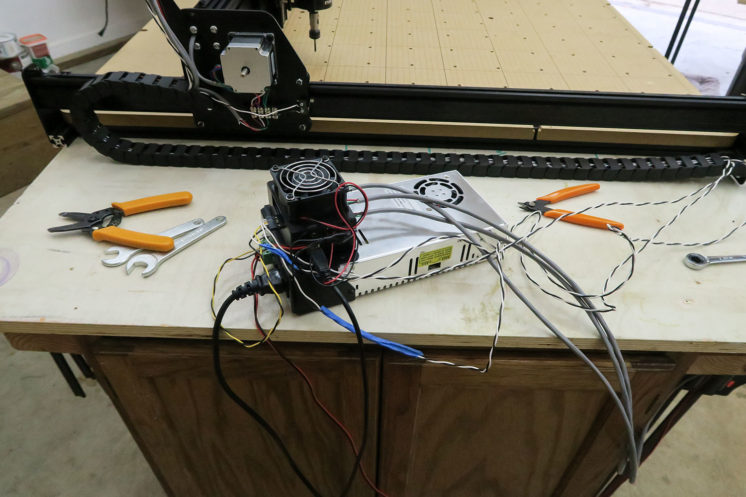 The stock spindle left me wanting more. It’s underpowered in my opinion. When using my Shapeoko 2 I mounted a trim router and it made a huge improvement in cutting speed. I’m sure the vast majority of people using one of these desktop CNC machines will upgrade to a trim router. 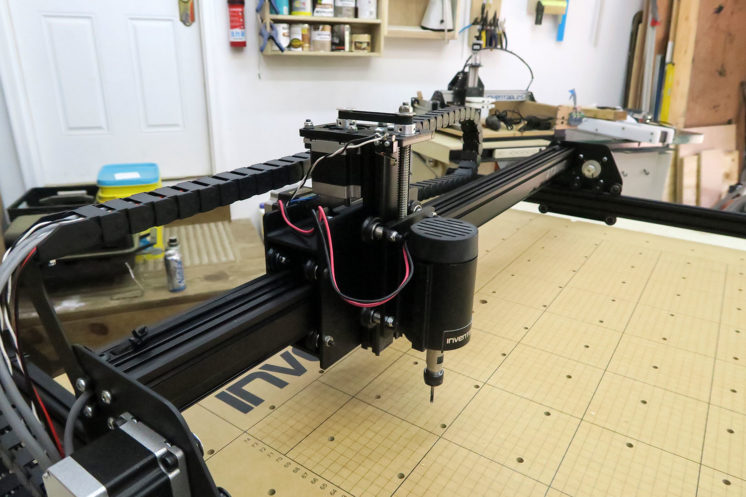 My unit doesn’t have a way to mount a manual crank to the top of the Z-axis. I do believe this has been changed (?) but for me it means I have to use a wrench to spin the drive rod when manually moving it which takes forever. (Bob Clagett just made a 3d printed knob for this very purpose. He also has a limited quantity for sale in his store) 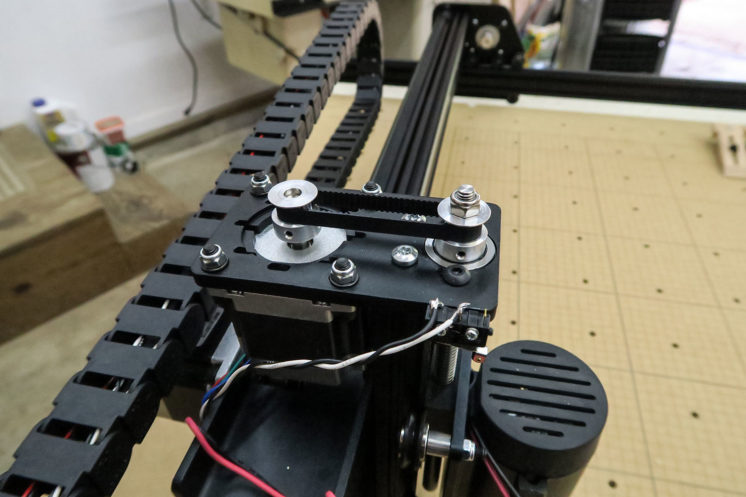 I haven’t had any of the motors slip on the belts. No problems there. 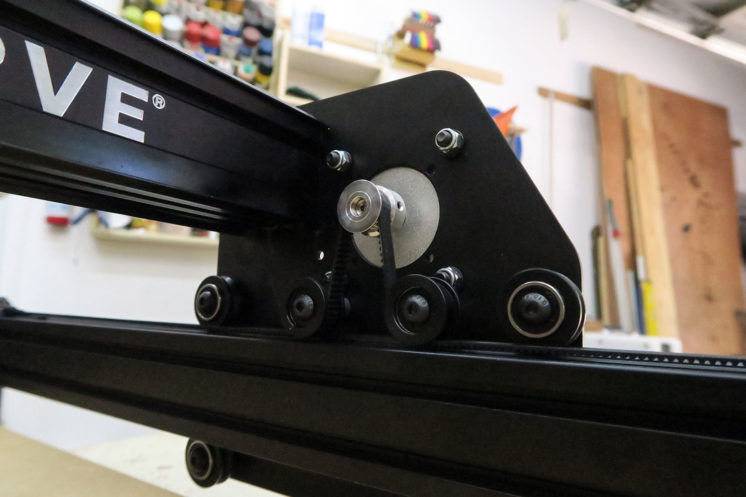 I had a random problem with my Y axis suddenly only moving in the negative direction. After a few days and a forum post I found that this was caused by the G-Shield not seating properly with the Arduino. The extra limit switch pins sticking out the front were hitting the enclosure. I had to use a dremel tool to carve out a larger opening for the pins in the mounting housing which would allow the G-Shield to sit down further onto the Arduino. 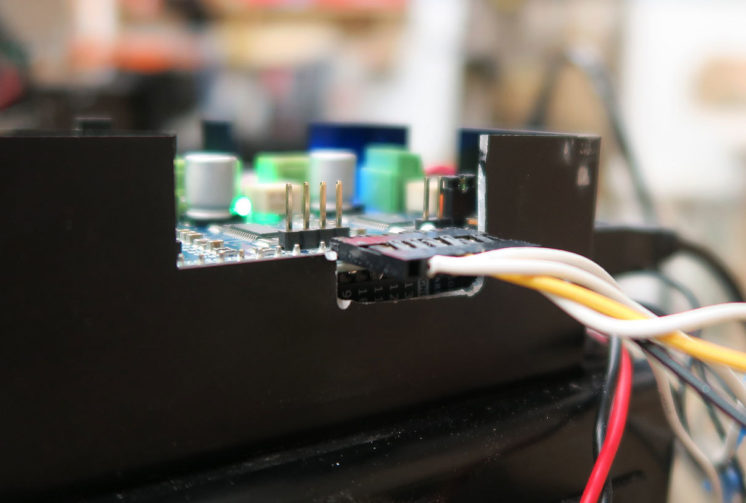 Final Thoughts On The X-Carve?

I’ve had the machine for four months now and I’ve done a 180 on my initial excitement for CNC machines. I honestly can’t find a use for it in my workflow. For me personally, I think It’s slow and inconvenient to use. The only thing I seem to be using it for is simple signs and decorative stuff for friends and family. There’s plenty of videos out there showing decorative stuff being cut on a CNC so there’s no need for more in that area. I’ve made about 5 or 6 signs and otherwise I’m just scratching my head to incorporate it into a project without it being for decorative use. I feel like I’m trying to force myself to find ways to incorporate it instead of saying “this is my first solution to solve this problem.” One major influencing factor to me not using it much is that it’s really slow with the stock spindle. Yes, it can be a “set it and walk away” kind of tool but it still takes a while to cut just about anything. Yes, that can be solved by upgrading the spindle to a trim router. But because nothing I make requires CNC precision I find it much more convenient to use a bandsaw or table saw to cut out what I need for a project and the added decoration that I could carve with it feels more like an inconvenience than being worth the time. Things may change, but for now it’s literally sitting and collecting dust waiting for me to incorporate it into a project. I actually feel a little bad for accepting it now.

I’m not saying the machine is incapable though. It’s one of the less expensive routes out there to get a capable CNC machine in your shop. Steve Carmichael just used his X-Carve to make a complete guitar.  If you’re into sign making, prototyping, or projects that require CNC precision the X-Carve might be a good buy for you. That’s your decision to make and I honestly don’t care one way or the other as I have nothing to gain or lose by you buying or not buying one. But knowing what I know now, with the way I work in my shop, and the typical woodworking projects I like to make I personally wouldn’t buy it with my money. Even right now with my current shop and the tools I have in it I think my money would be better spent on other shop improvements. Just my opinion. 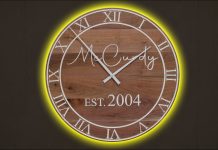 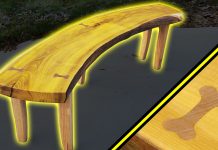