It’s always fun to work with someone else in the shop. Especially when the project can be knocked out in a day or less. For this project I had the help of Shawn Stone from Stone And Sons Workshop on Youtube… or maybe he had my help because we made a project for his shop?? Either way, we had fun and were productive enough to get the job done in one night.

Shawn is a fellow YouTube woodworker who likes to make a lot of reclaimed projects. Be sure to check out his YouTube channel and subscribe if you would like to see more of his projects. He actually lives relatively close to me so odds are this won’t be the last time you see him in my shop.

The project itself is a homemade shop air filter. Shawn was able to score a couple old furnace blower motors for free and the smaller of the two was to be the fan for his shop filter. The other he gave to me to use later. I’m not sure when I’ll get around to making one for my shop but now I know I have a motor for it. 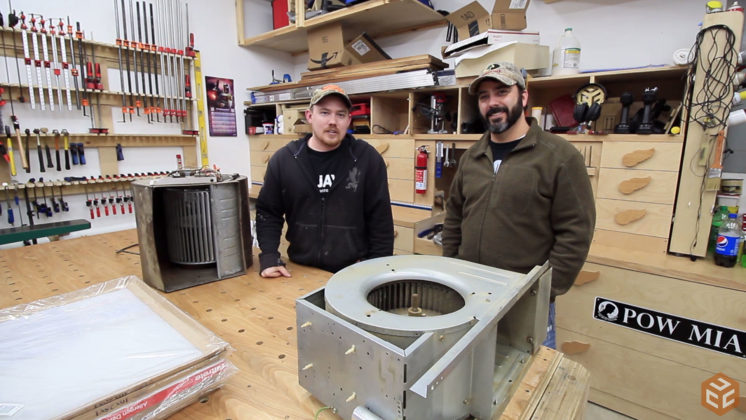 We made this entire project out of one sheet of 3/4” plywood. The plywood we’re using is PureBond hardwood plywood. It’s made in the USA and formaldehyde free. I’ve been using it since making my miter saw station and have had great results with it. This plywood is heavy stuff though so I don’t like to wrestle a full sheet of it over my table saw. Instead, I like to slide the sheet over one side of my plywood storage cart and make the first cut with a circular saw. 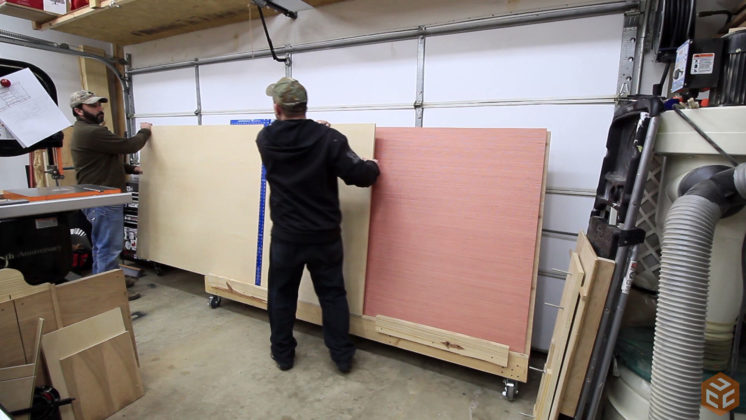 Then the much more manageable piece can be cut at the table saw. 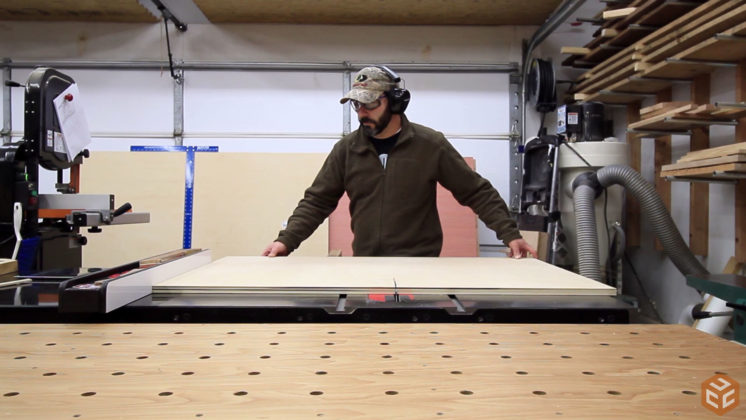 Step 6 is always the best step. Watch someone else do the work…just kidding! Hard work never hurt anybody ;) The blade was lowered by the way… 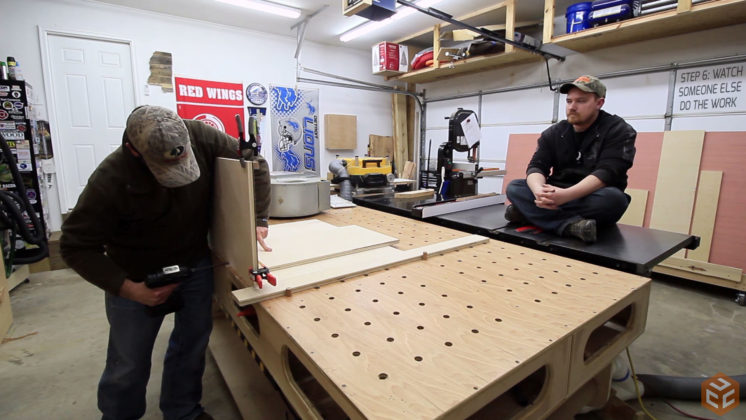 This project is literally just a box. Well, a box with a couple of filters. It’s an incredibly easy project that anyone can make with a blower motor. 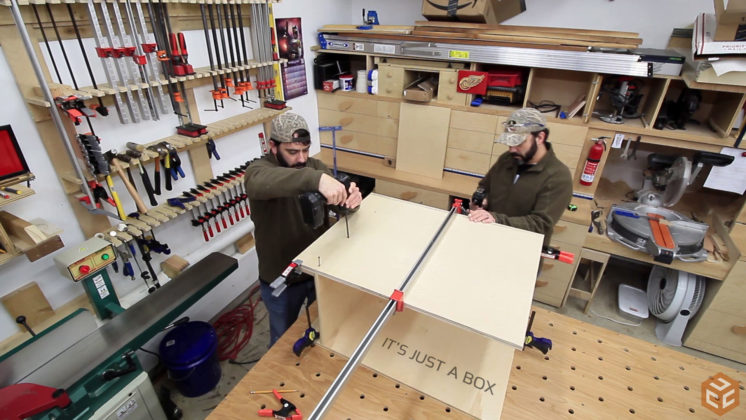 Lastly, a bunch of strips can be cut that will later make up the frames. This was a lot of repetition to cut all of the strips to size. 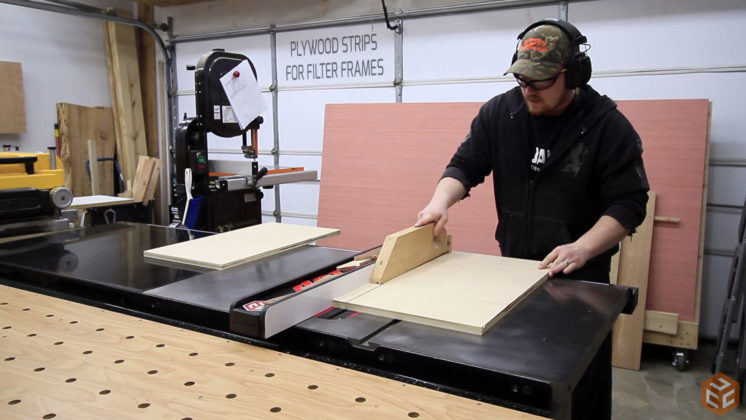 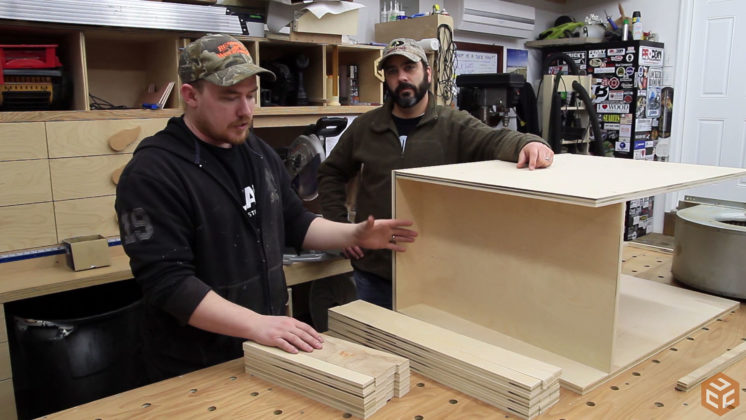 To make assembly of the frames a little easier we setup a little jig on my assembly table. Not really a jig, actually. It’s just a square chunk of plywood clamped down to the table. This allows two boards to quickly and accurately be aligned at 90 degrees and joined with wood glue and a few brad nails. These don’t have to be crazy strong as they will eventually be installed into the final assembly and held in place with a couple brad nails. Their only purpose is to space out the filters. As you can tell, I was being very productive here. 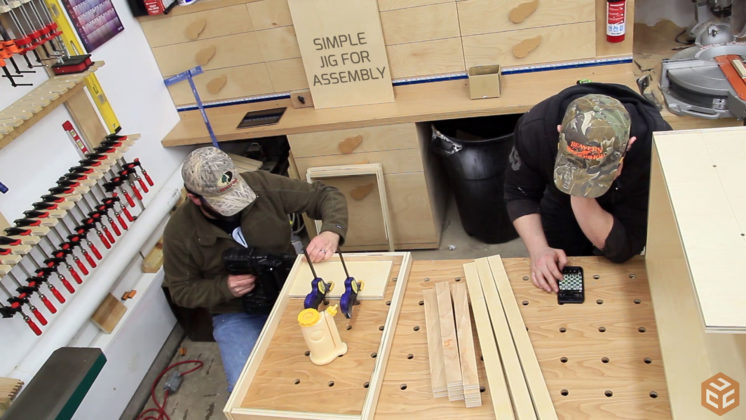 The intake frames were added first. The frame closest to the blower motor has a couple extra vertical supports to hopefully prevent the filter from collapsing due to the suction. 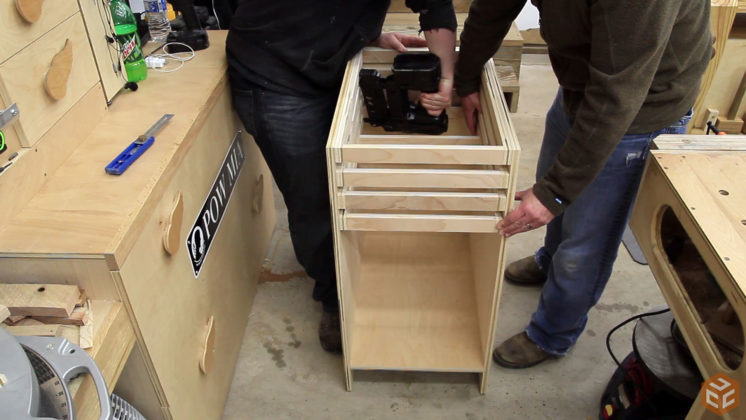 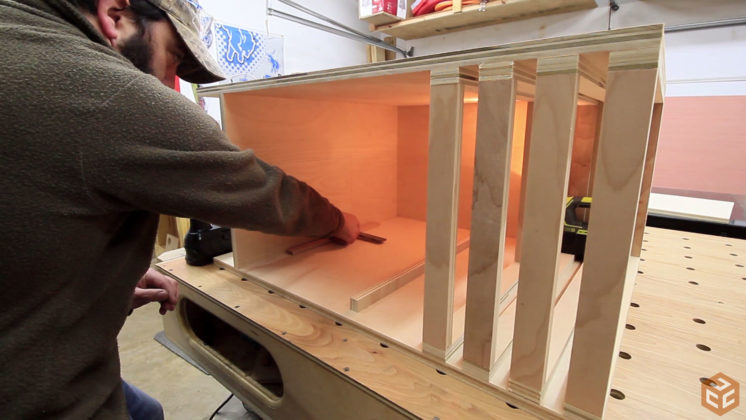 Before mounting the motor I cut the exit air hole. This should have been done before assembly though as I didn’t have good access with my jigsaw to cut the hole. I ended up using a drill to make jigsaw starter holes, the jigsaw to make the horizontal cuts, and an oscillating tool to make the vertical cuts. 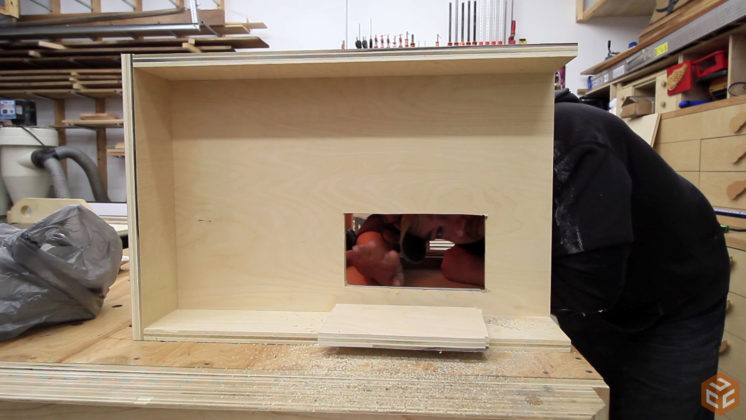 After cutting the exit hole we installed the exit filter frames and tested the fit with a filter. So far everything worked out as planned. 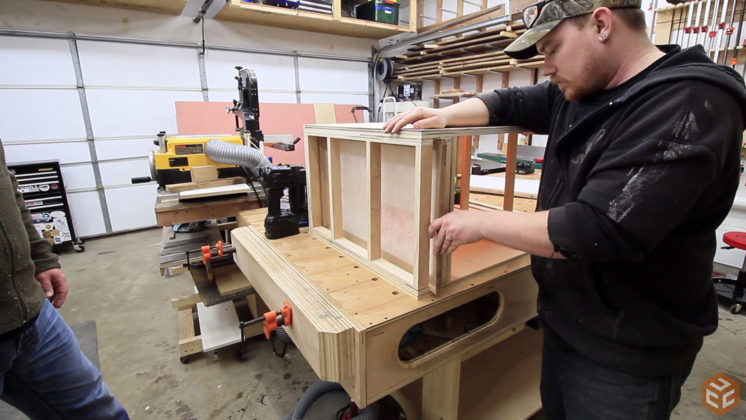 We are only working on the construction of the unit here. Shawn planned on finishing the electrical and installing it later while in his shop. But to allow access to the electrical when the unit was sealed we drilled a hole in the back panel for the wiring. 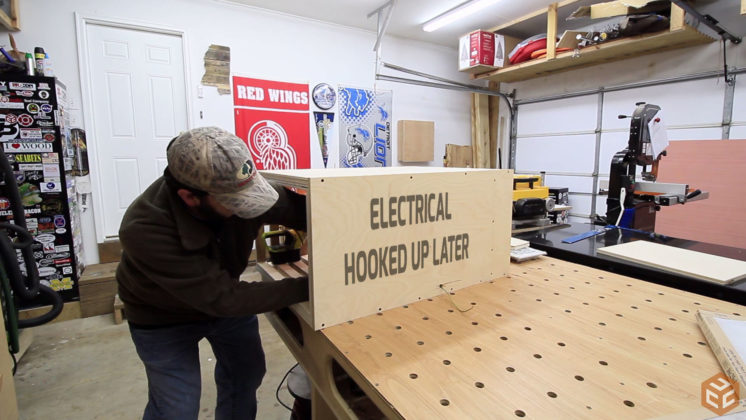 The motor slid in place as planned and we secured it on the top side of the housing with a couple of screws into the exit side panel. 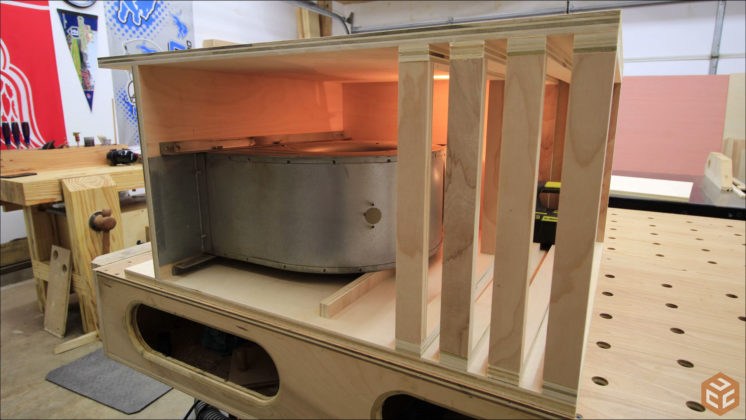 Before adding the last piece we loaded it up with filters to get a final check of the intake side. We went with three filters for the intake to reduce the work load of each filter. The two outer filters should catch the larger stuff and the intake filter closest to the blower was the highest rated filter to remove the smaller particles. 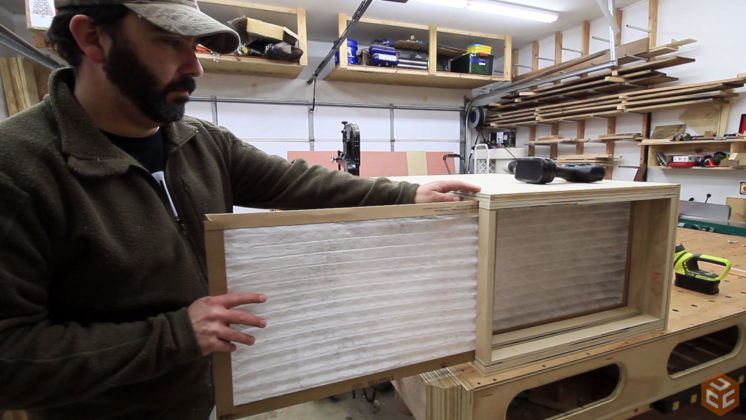 The last piece to be installed was the front panel. This will be the side facing the middle of Shawn’s shop when installed. Once installed, the unit will be close to the ceiling so removing the top for maintenance would not be possible. For that reason we chose to construct the box in such a way that the front and back were attached to the top and bottom. That way the front panel can be removed easily with a few screws. And speaking of it being installed, Shawn put together an installation video for those who want to see it mounted in his shop. Be sure to subscribe to his channel if you want to see more videos from him and also check out his website for more info. 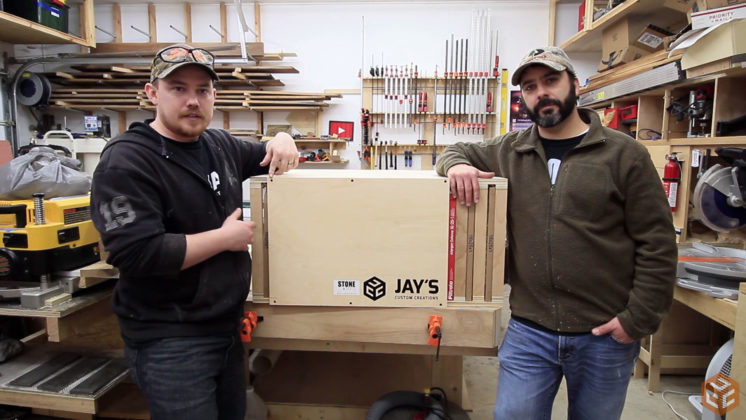 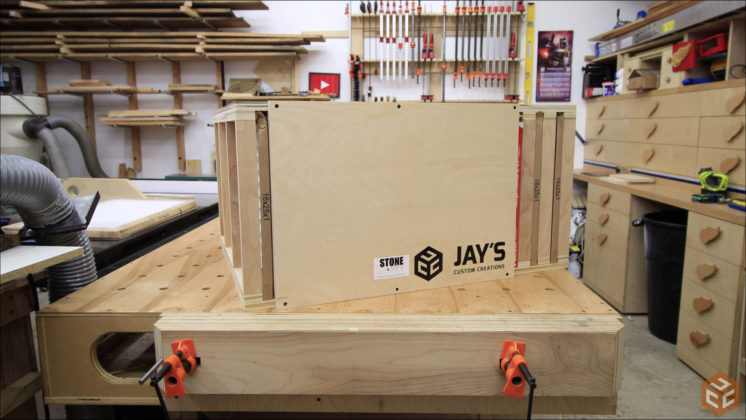 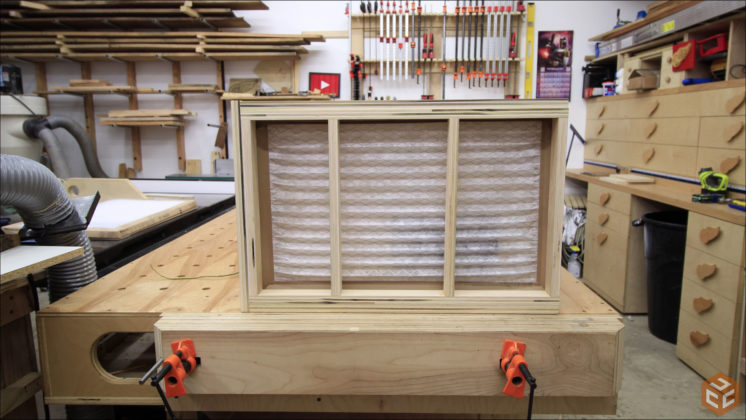 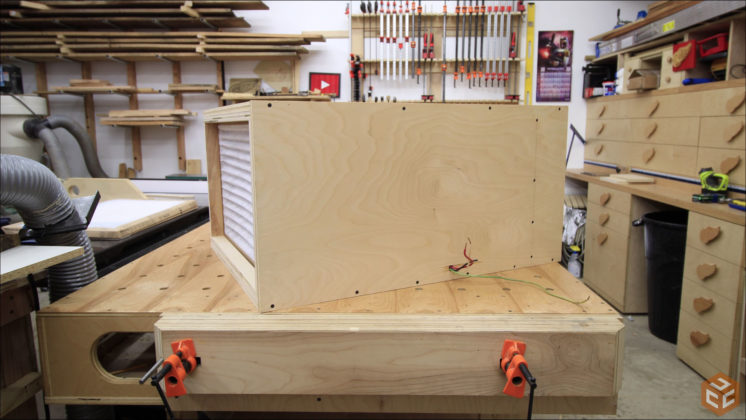 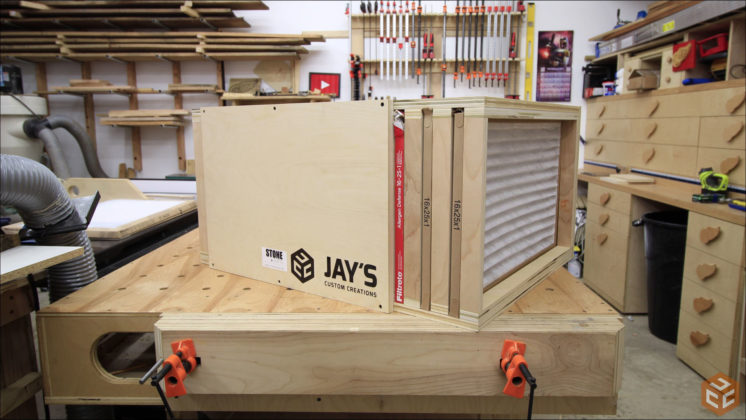