I recently had the chance to shoot a quick shop tour video in my friend Wayne Brown‘s shop. If you use Instagram be sure to click his name and give him a follow. The video above is the shop tour and the pictures below are…well…pretty much the same thing. His shop is a 2 car garage that is 20′ x 22’ with a small bump-out in the back where he has his refrigerator and some household storage. To start the tour I’ll be taking you through the large entry door and working my way right to left along the walls. Then we’ll cover the interior space. Hopefully you will be able to get a few ideas from his setup.

First up is a simple mobile cart for his Ridgid oscillating/belt sander. He keeps this by the door because dust collection isn’t that great on it and he prefers to wheel it outside to use it. You can also see a canister filter on the floor that he plans on making some homemade mounts for to adapt it to his current dust collector. 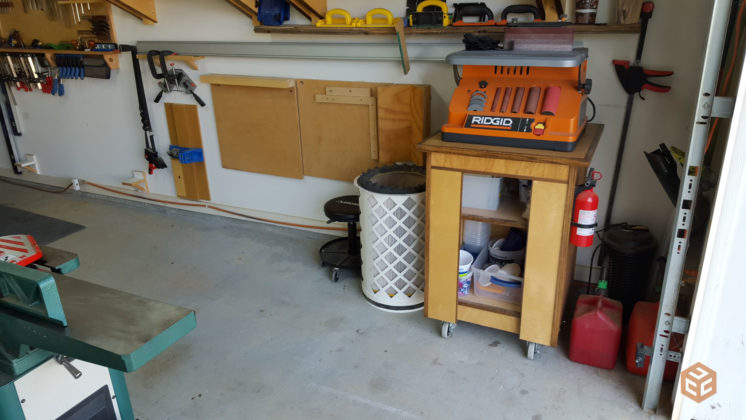 Above that is a simple lumber rack. We both agree that vertical storage is the way to go if you have the space. Horizontal storage seems to be a “catch-all” location and you always need the board that is buried in the stack. 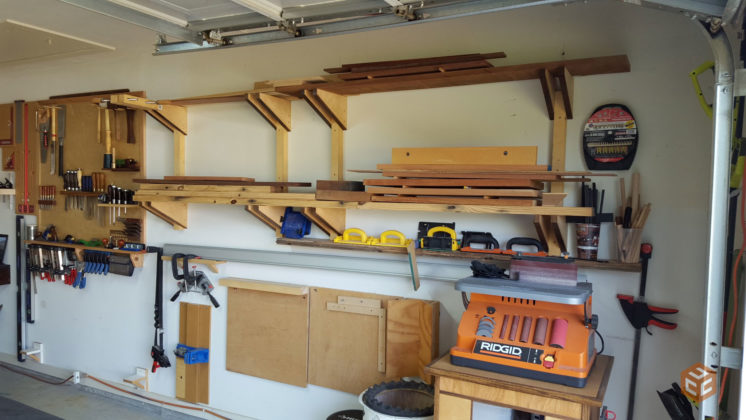 To the left of the lumber rack is his new tool wall. Simple tool holders for everything. Dowels, a lower shelf, and a few horizontal boards. Simple and efficient. 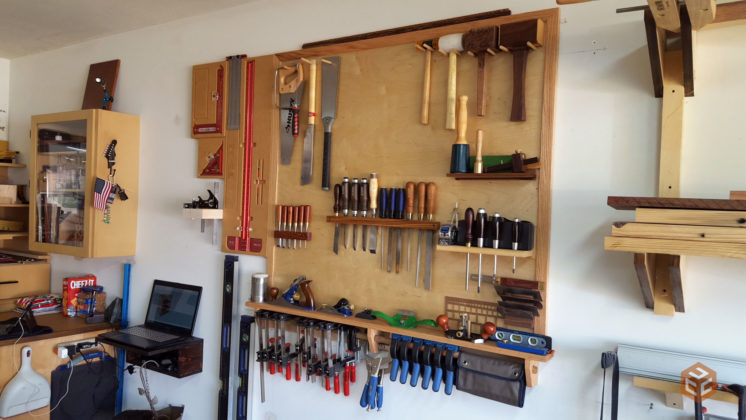 In front of the tool wall is his workbench. He just built this using my workbench plans but added a few inches to the height. 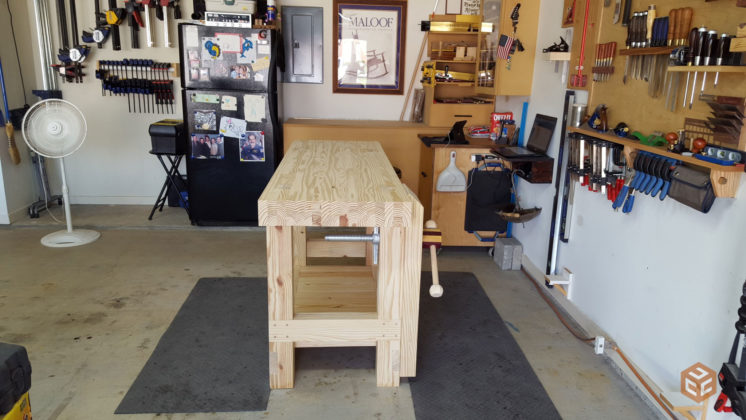 Check out his custom LSU themed purple heart and yellow heart leg vise hub. The handle is temporary. It’s just a piece of dowel stock with two pre-made bun feet secured to each side. 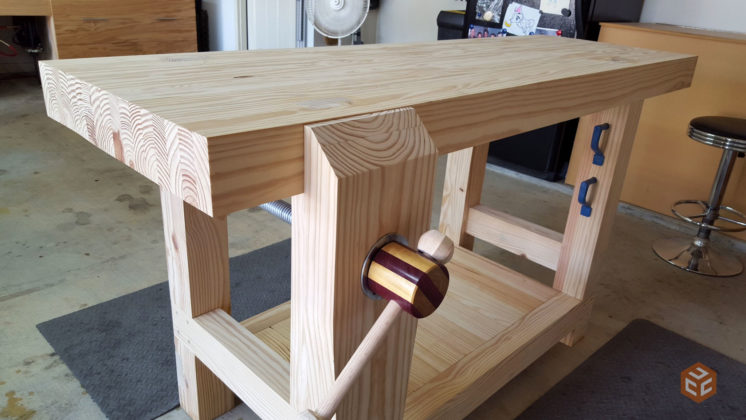 He also opted for a simple shelf on bottom instead of a storage cabinet. 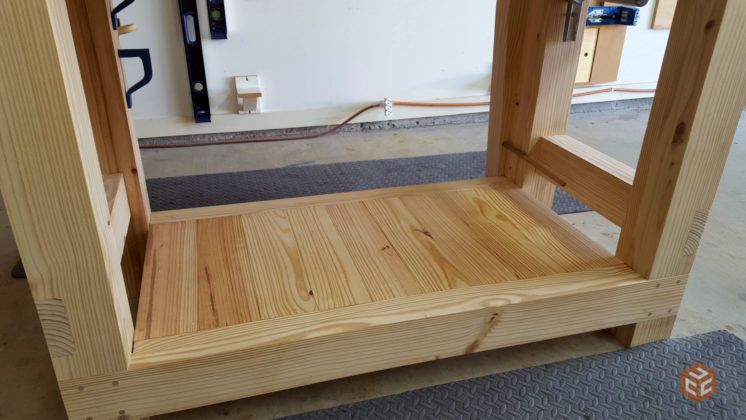 Here’s a shot of that corner of the shop. This is his normal sitting spot when he’s just hanging out in the shop so he’s got his laptop and tablet handy for watching YouTube videos. 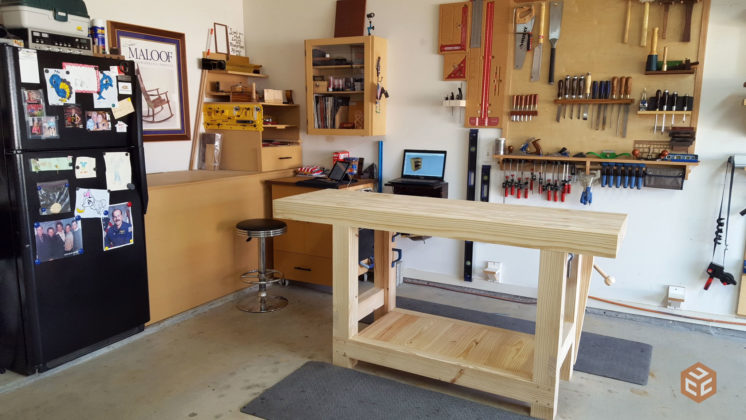 In the corner is another simple edge banded cabinet. 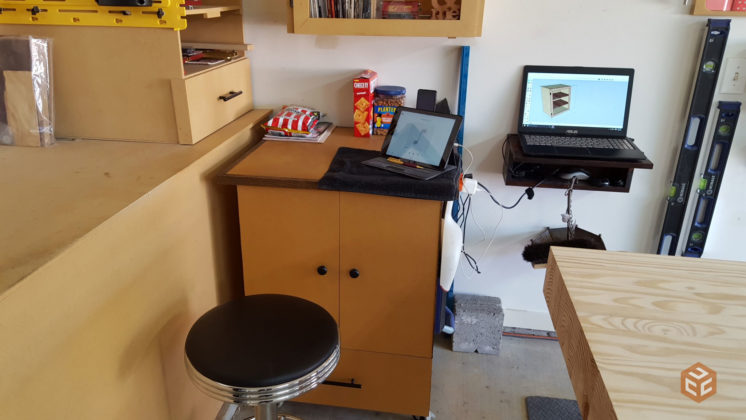 Above that is a simple glass door cabinet he made and some of his Incra and various other jig storage. 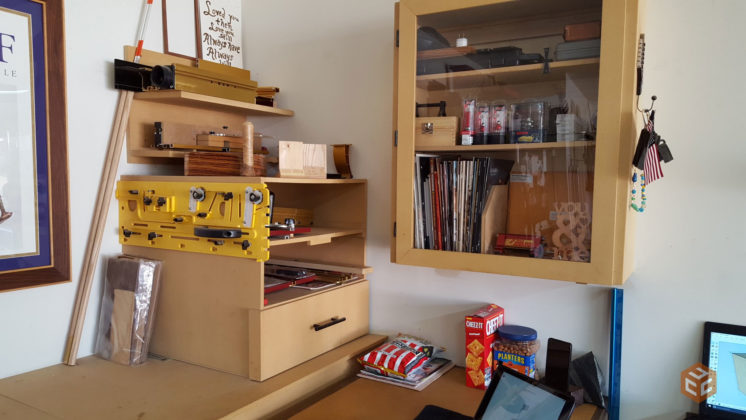 Shop inspiration! A Sam Maloof poster in a custom walnut and maple (I think) frame he made. 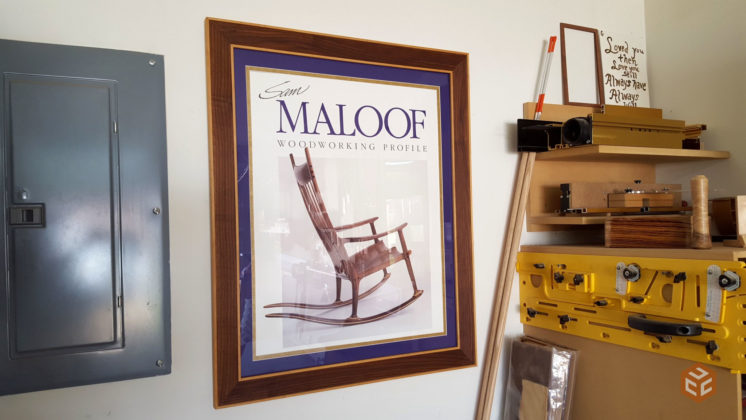 Below the Maloof poster is a large chest-like storage bin for household items. Left of it is a shop refrigerator for water and munchies. 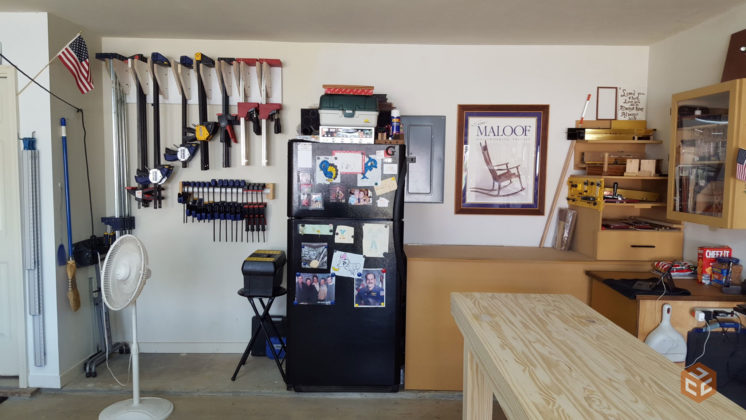 To the left of the refrigerator is his clamp rack. I’m going to be re-doing my clamp rack soon and this is the design I’m going with. My universal design hasn’t worked out as planned…I’ll get into that later though. 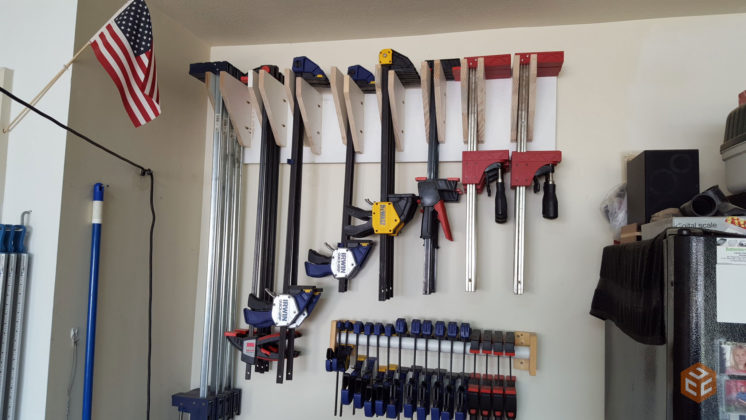 Left of the clamp rack is the entry door to the house followed by the beginning of his miter saw station. 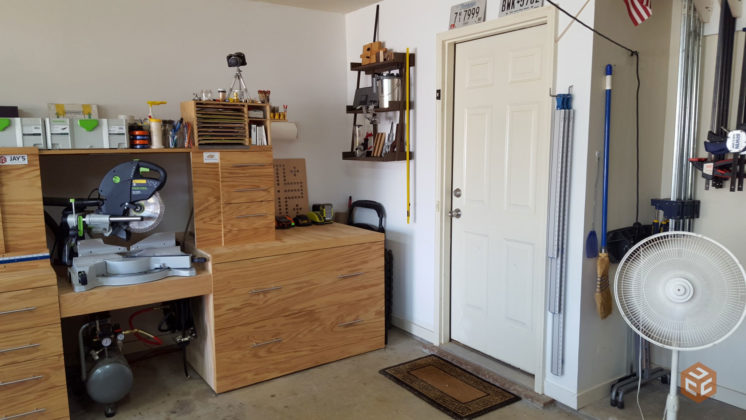 In the corner is a shelf with random, non-commonly used items. 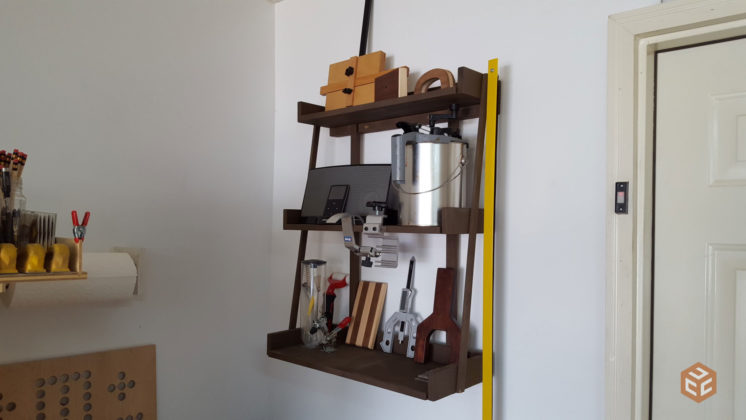 The far right of the miter saw station is a battery charging area and the larger drawers are for tool bags and boxes. 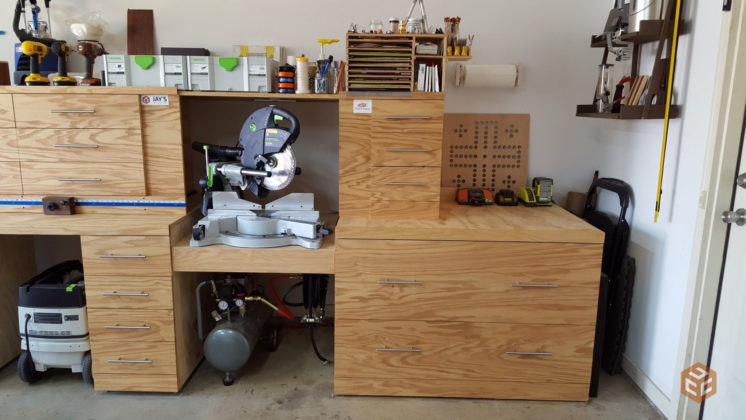 The miter saw station was also built using my plans. He opted to not build the top cubbies though as he didn’t have a need to store anything on top of them. His station is setup to accommodate his Festool Kapex miter saw and for dust collection he is using a Festool dust extractor. Below the miter saw is a California Air air compressor. It’s REALLY quiet. If you’re looking for a quiet air compressor you should definitely check it out. 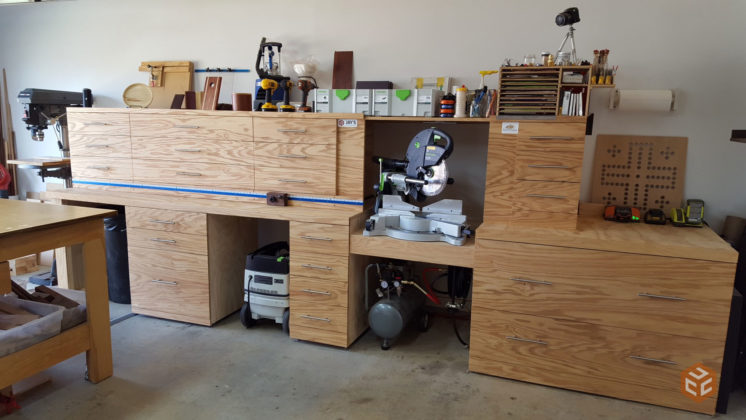 Left of the miter saw station is his floor standing drill press and a shopvac for the mess it creates. 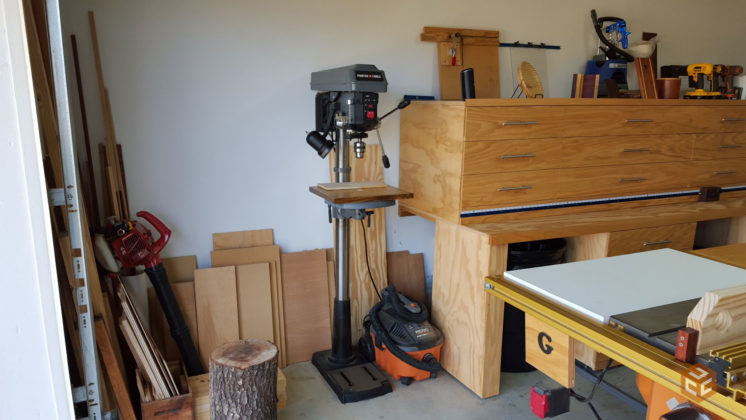 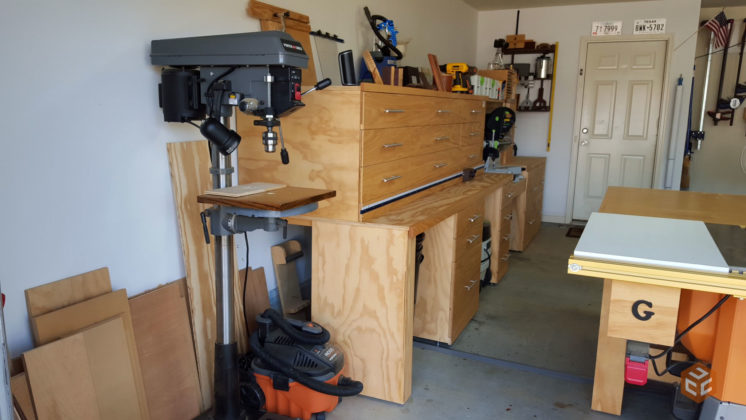 Moving to the center we can see his “tool island.” I’m very much a supporter of this island style setup as it does a great job of combining dead space that most every floor standing tool has and therefor increases usable shop space. 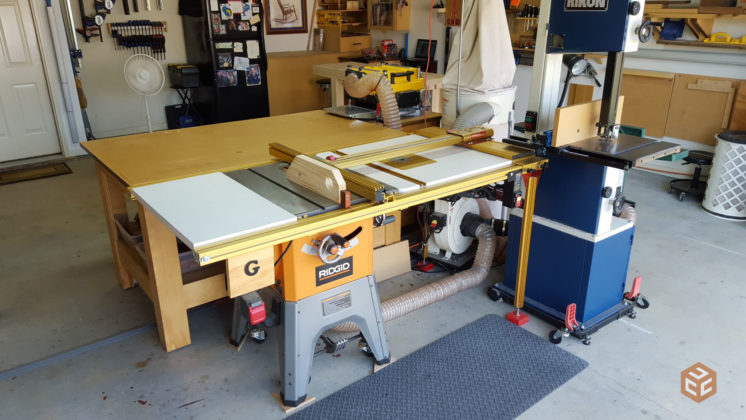 His table saw is a Ridgid table saw equipped with an Incra LS fence and integrated router table on the right wing. On the front rail to the right you can also see an external switch. He’s got the dust collector plugged into it to make turning it on easier than reaching under the saw wing. 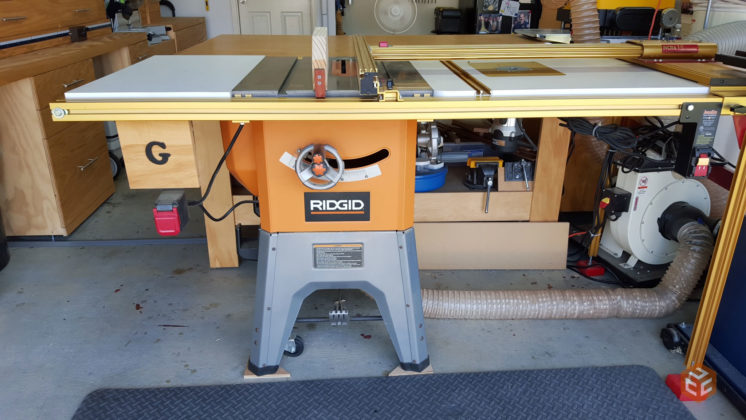 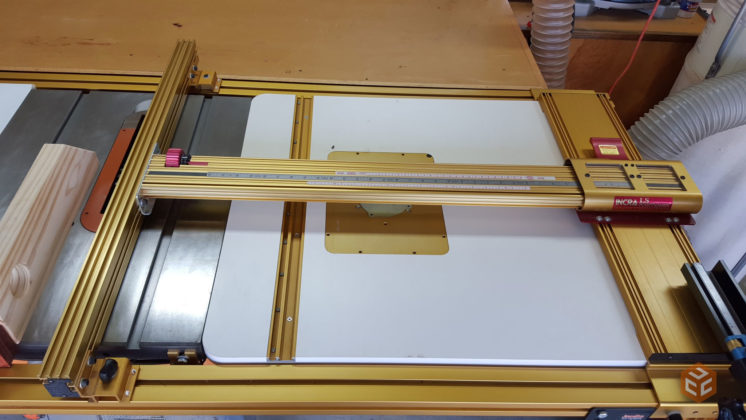 To the right of the table saw is a 14” Rikon bandsaw that is always equipped with a carbide tipped Resaw King blade. 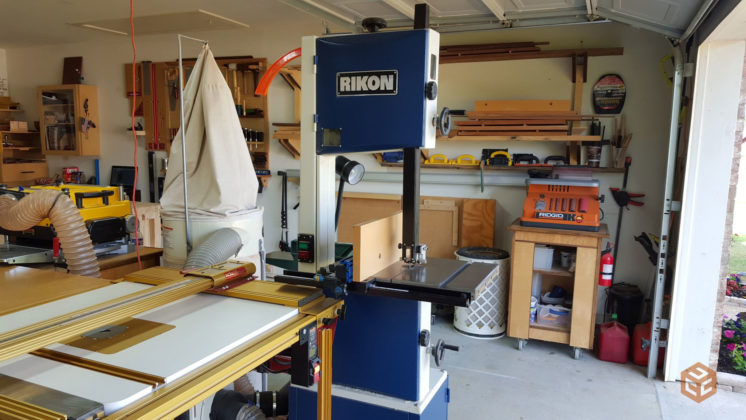 What’s nice about this island setup is that everything is hooked up and ready to use at all times, the dead space for each tool overlaps which results in less wasted space in the shop, and each tool is placed to achieve maximum infeed and outfeed at all times. 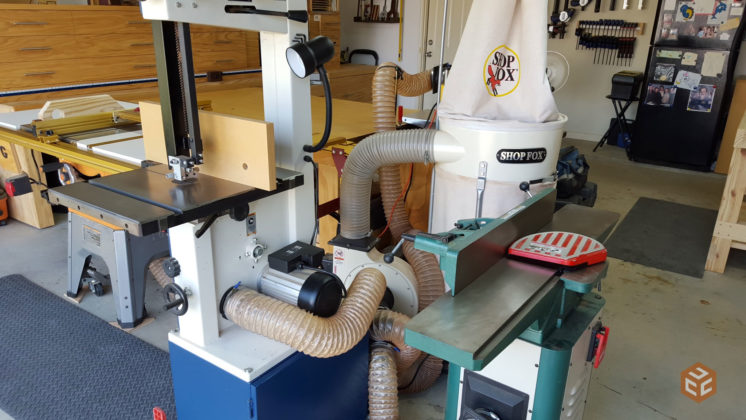 Behind the bandsaw is his 6” jointer. Like many others, he wishes he would have gotten a larger jointer. 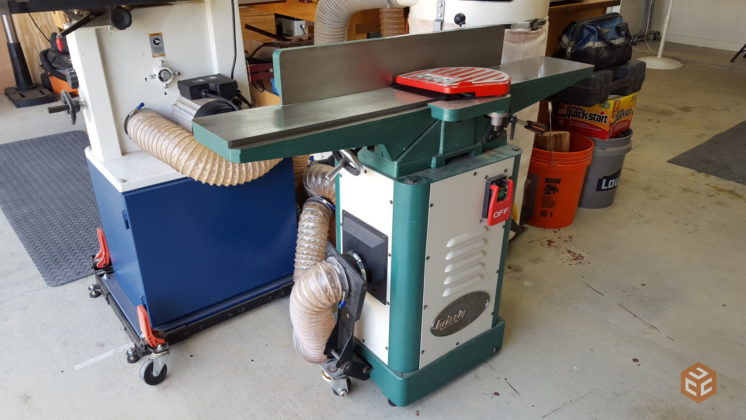 To the right of the jointer is his dust collector followed by his planer stand. The planer is positioned so that it uses the same outfeed table as the table saw. 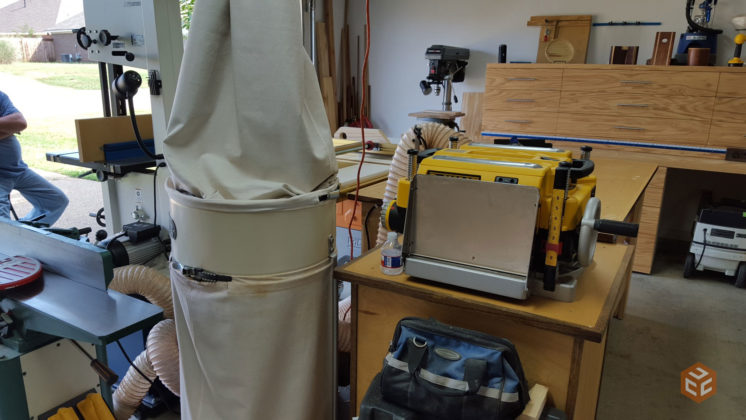 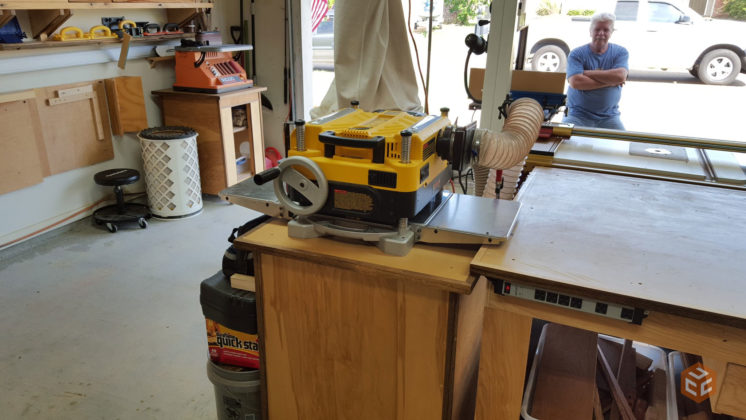 His outfeed table is a simple design with one lower shelf. He stores small hardwood scraps in different bins by species. I like this approach as this way you can take one of the bins out and sort through them individually instead of having a huge pile of stuff.

And finally, the extra space that the tool island created behind the outfeed table. He plans on building a 5’x5′ assembly table in this open space. 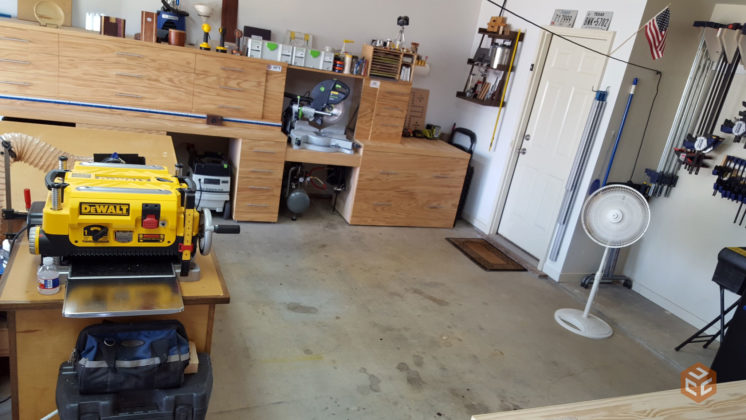