I have a list of “to do” items for the shop that seems to be getting longer daily. One of which is to make some extension wings for my table saw. Eventually they will be used as router tables. I decided I wouldn’t cut any holes in the tops until I made up my mind for what to put in them. So lets walk through making a wing real quick for this saw.

First thing is finding materials. While visiting the in-laws during Christmas I was able to snag a few boards out of the loft of their barn. For a surface I wanted to go with laminate but didn’t want to spend any money on a new piece when It dawned on me…there is a local lumber yard that does custom Formica countertops. Every kitchen today comes with a double bowl sink which is slightly larger than the size of most extension wings. Score! I asked if they had any free sink hole cutouts and was able to leave with a piece of Ebony Granite Formica that matches the Porter-Cable saw great as well as a few other matching scraps I could use to make a fence down the road. So now I had my materials for free, reclaimed red oak and a free piece of cut off laminate. 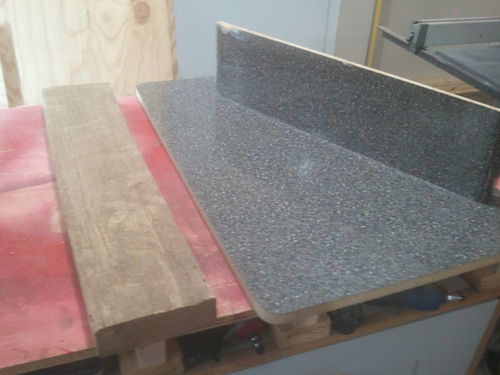 I knew surfacing the oak was going to be a pain in the butt as it has been sitting for years and years collecting dust. The first thing I did was cut off a usable section to to start milling it down for my frame. As you can see the dirt and grime is relatively deep. 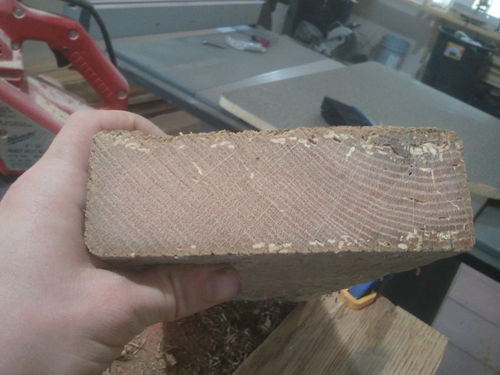 I used a cheepo bench plane to remove most of the junk material before I ran It through my planer. I definitely would have chosen a different method but the plane used was a $10 HF plane. I can assure you the plane is in better shape after seeing this board than it was the day I got it. 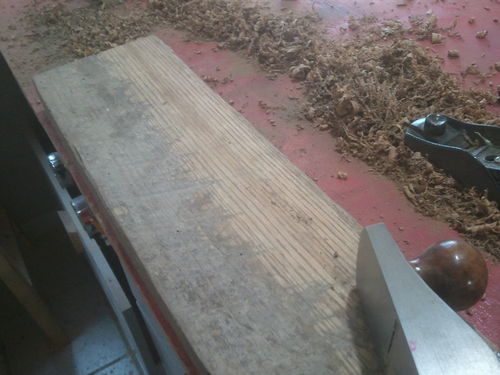 15 minutes or so of elbow grease later I was left with a chunk of oak with some pretty decent grain. 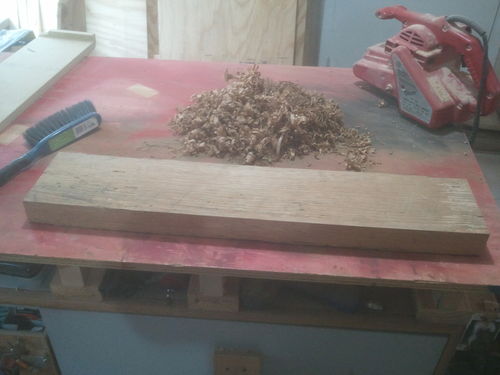 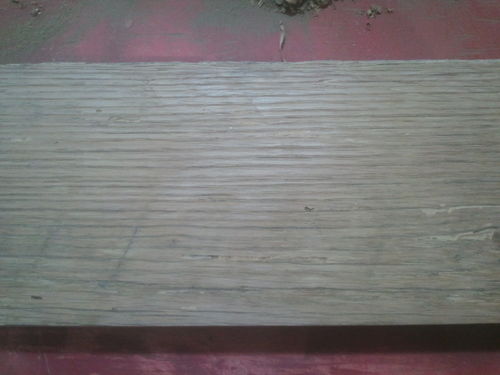 Next I ran it through my plainer to clean up the faces. The resulting board was slightly under 6/4. My original plan was to rip my frame pieces out of this but after looking at the stamped steel wing I knew the pieces needed to be closer to 2” for bolting area. I decided to re-saw the entire board in half. I made the cut on the table saw in several passes to reduce pressure on the blade. My cut was slightly off center so my resulting boards were about 5/8 and 1/2. 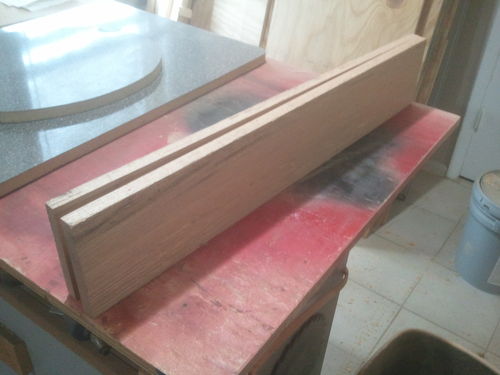 This is some great lumber. The barn in which I got the boards was put up by the Amish about 80 years ago. Its a shame I had to cut off so much junk to get to usable lumber. 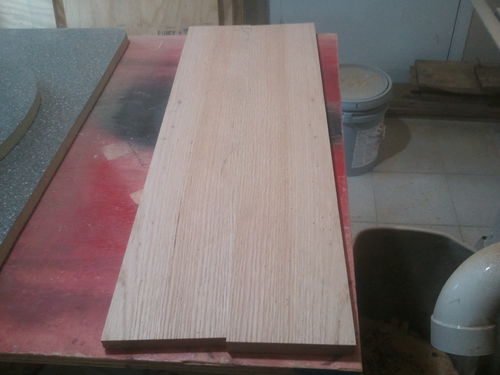 These pieces were then ripped to 2-1/4” wide. That dimension will be the height of my extension. 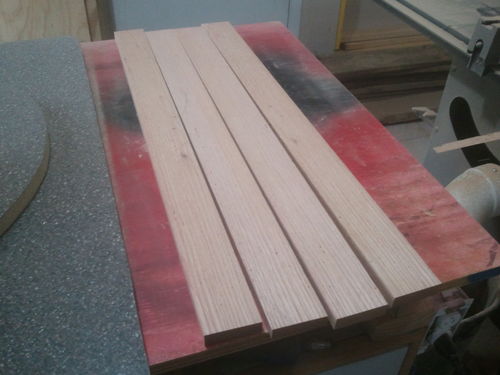 Next I ripped my formica piece to an approximate width and squared one edge perpendicular. I did not want to cut it down to final length as I was still unsure at this stage how I would actually assemble the frame. 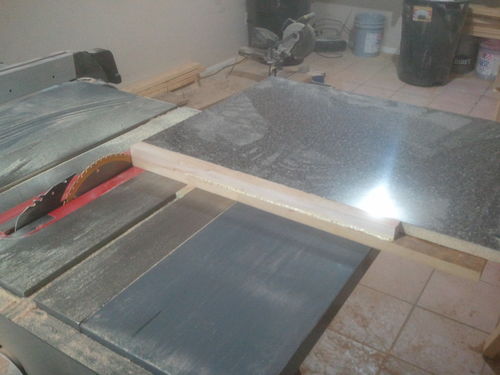 Time to remove the steel wing. The wing is attached to the saw with 3 bolts and to the rails with one bolt on front and back. A 17mm socket is needed for the saw bolts and a 13mm socket for the rails. 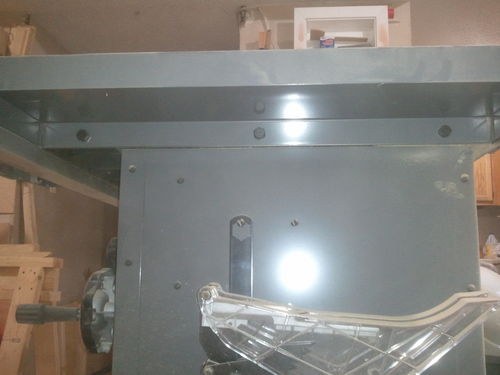 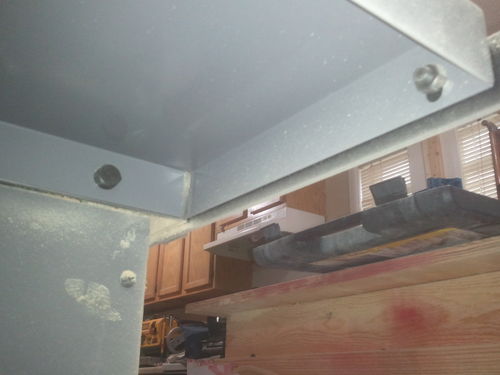 Making a frame for this could have been a lot easier. If I were to redo the entire process I would have built the box completely first then drilled out the mounting locations. However, I built the frame in place as the top would interfere with the 3 bolts to the saw. The 3 bolts to the saw were one height and the front and back rails were another height. To save some measuring I clamped the old wing to the new frame piece to mark the holes to drill. A 1/2” drill bit will be used for these holes. I’m not sure the actual thread size of these bolts but a 1/2” hole will allow about 1mm of adjustment once the bolts are inserted. This is plenty of movement to get it perfect with the top of the saw. 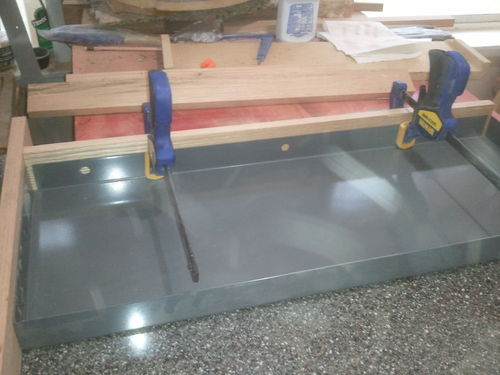 After drilling the holes in the first frame piece I tried to slip it into place and test for fit when I noticed a lip in the front rail preventing me from putting it in. 1-5/8” down from the table surface is a lip that is used to register the front rail to the saw top during initial installation. Just cut a notch into this frame piece. I later cut a groove in the front frame piece just the same as one would cut a drawer bottom slot. 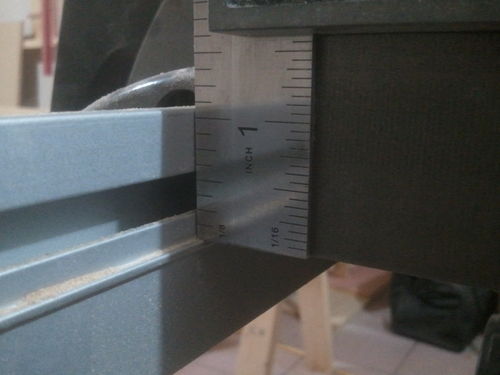 Here is the first piece fitted into place. Luckily the 3 bolts to the table are about 1/2” longer than necessary for the stamped steel wing. I suppose they did this on purpose for you to add a wing of your own later. The extra length of the bolts are perfect for this. 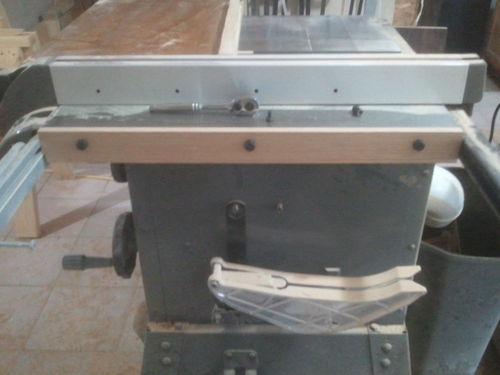 The next pieces were simply cut to fit and drilled for rail bolts. I had some extra miter bolts from a counter top job I did a few months ago. These bolts have flat bar washers that are used to clamp miter joints in counter tops. They are way too long for the job but I figured I would use them and not spend any money on hardware. Although, any hardware can be used here. 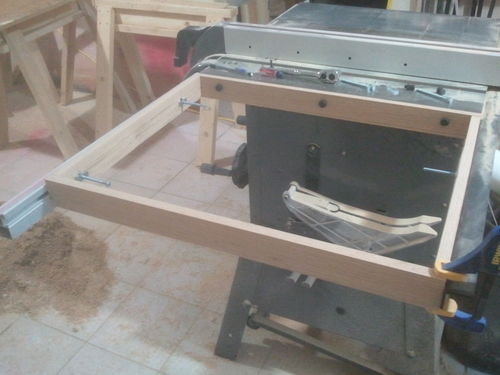 Having the frame clamped in place I was able to get final measurements for the formica insert. I cut this on the other side of my blade with my panel sled. With the formica cut I slipped it in place with it resting on the bolt heads. I was then able to mark from the underside where I needed to rout out some room for the bolt heads. 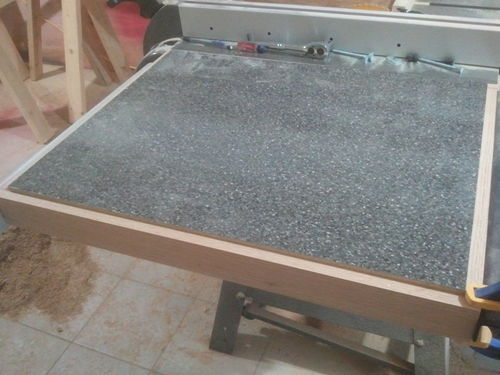 I used a large tip marker to make sure I had enough material marked for removal. 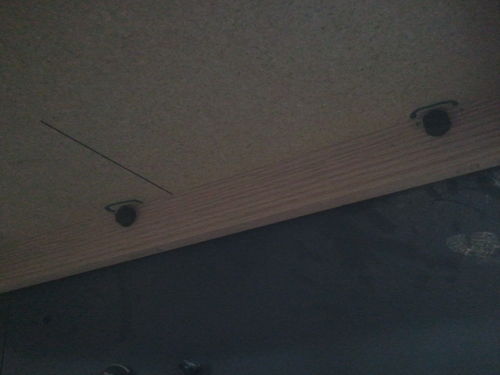 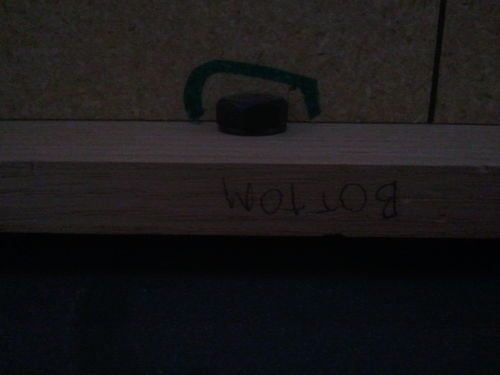 Time to brush up on some freehand routing skills. It was right about here that I decided to use pocket hole screws to attach the top to the frame. With all the pieces pre-drilled and ready to go I removed the remaining pieces off the saw and assembled the wing on my bench. 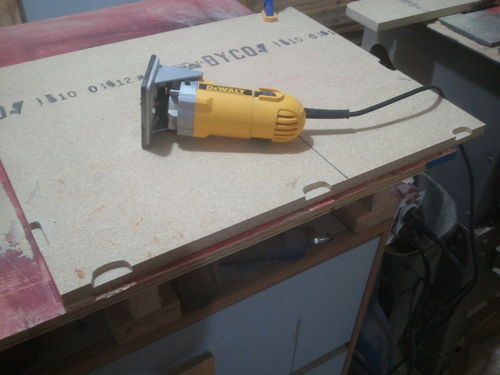 The only 1” pocket hole screws I had on hand were coarse thread. Course threads and oak surely do not mix. Just dab the treads in some paste wax and nothing will crack. I used 20-30 screws and had not one split or crack. When attaching the top to the frame I shot 2 brads on either side of the screw from the rail into the top and then screwed it in place. The brads will prevent the screws from lifting the adjacent piece as pocket hole screws are prone to doing without being properly clamped. 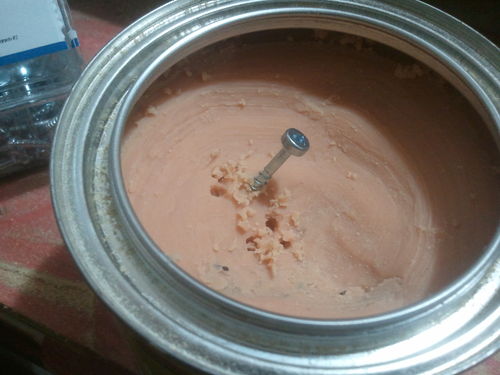 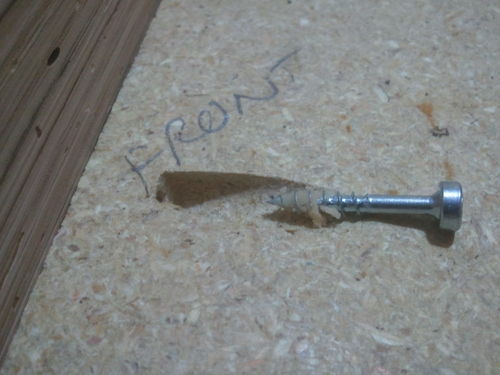 From there I just bolted the entire unit in place as any wing would be installed. I am quite happy with the finished product. I have a few errors on my part but they are in non important areas thankfully. I had one gap in my frame pieces. Not sure how that happened but oh well. As you can see I more than doubled the wing size. It was a great build and will serve a good purpose. I am definitely putting a router in but am undecided on if I want to build a router lift or buy one. The other side of the saw has less room for a router due to the motor being on that side. It does however have just enough room to do the same for a dedicated laminate router with a 1/4” round over bit. All in all, very worthy upgrade. Especially for the price…FREE! Check your local counter top shops for sink hole cutouts! 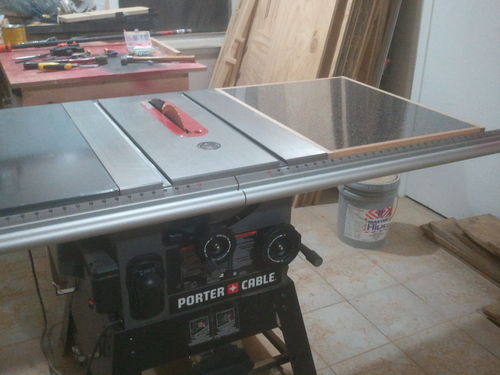 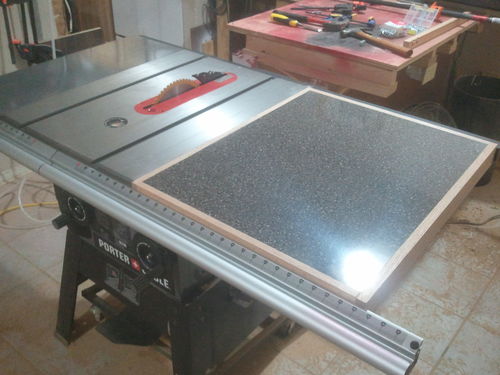 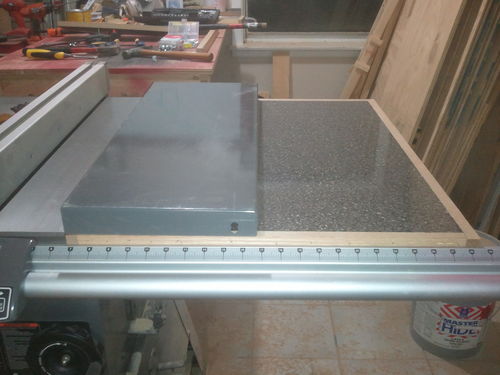 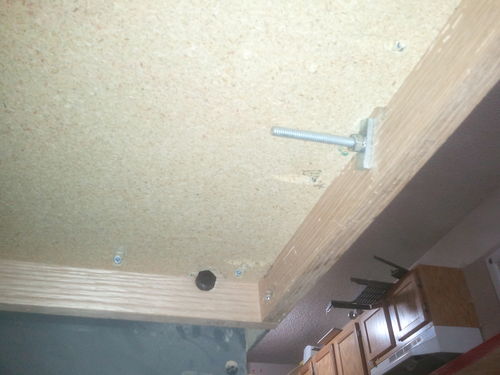 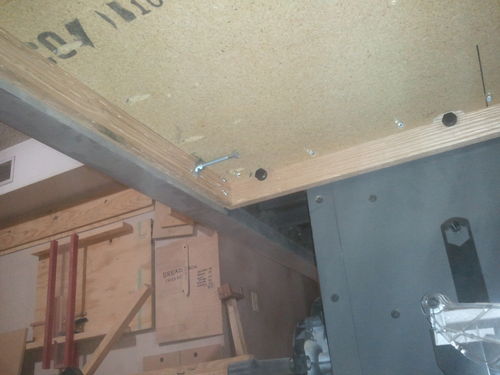