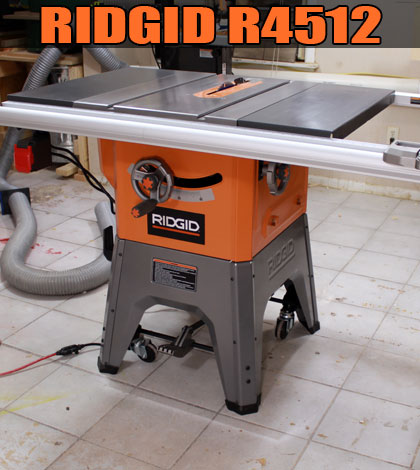 Its funny how things work out sometimes. When I made my table saw station I had the notion that it would be my first and only. Well as of now it is my only and I do not plan on making another. The simple fact is that our needs and wants change. The main reason for the table saw change is I made the table saw station too big for my shop. Maybe not too big if woodworking was all I did in there but when you throw in moving the light stands and the camera around it was definitely a pain in the butt to maneuver around. I could either buy a new saw or dismantle the old saw station and start over. Taking it apart and starting over seemed silly as nothing was wrong with it. I put too much hard work into getting it the way it was.

I also wanted to re-make a few of my table saw jigs but with the current ones working OK I never really pushed to do so. Here recently I’ve also come up with a few neat router table ideas that I would like to expiriment with. Now that I don’t have a router table anymore I might be able to do so.

So…I sold it and bought a new saw. The new owner of my Porter-Cable got a sweet table saw station with a bunch of already made jigs and I got a smaller, much easier to move around and store away table saw with the potential of more upcoming fun shop projects. Sometimes change is good. This is a win-win situation.

My intention was to get the same Porter-Cable saw I had but to my surprise the blue store replaced it with a goofy looking Delta saw. I wasn’t too thrilled with the display model that I saw so I made a trip up to the orange store to look at the RIDGID R4512. It looked to be nearly identical to my Porter-Cable so I bought it (update at the end of this article, I returned it). Boy am I glad for the invention of an appliance dolly. These saws are HEAVY! 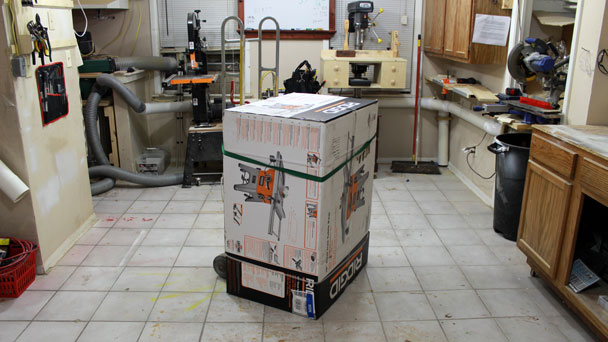 Opening the box. Lovely smell of shipping grease and all the parts in their own cozy, non-biodegradable compartments. 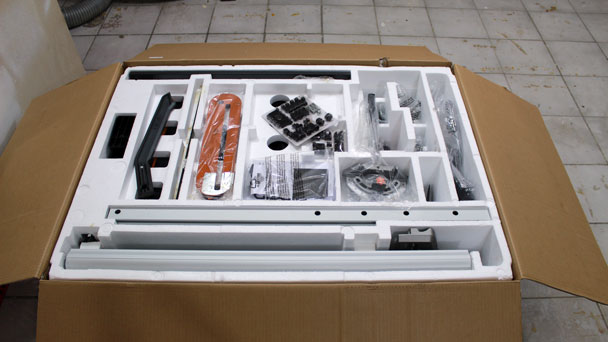 And all the parts laid out ready for assembly. 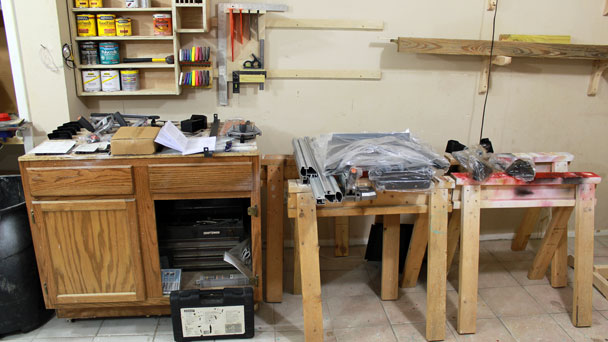 Step 1 was to place the saw upside down on a few wood runners. The saw was going to be assembled upside down. Moving this thing around by myself wasn’t fun. 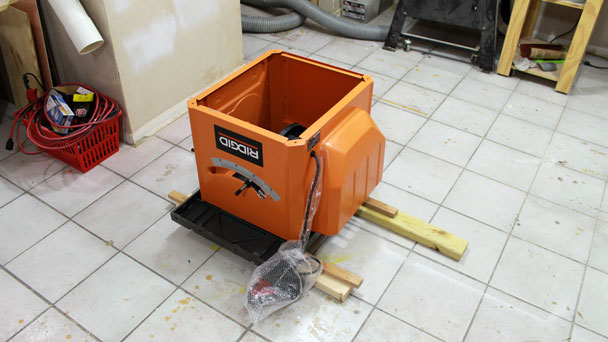 I like it when tool companies package the hardware like this. Having everything jumbled up in a bag really sucks when the instructions say “use two bolts labeled E with two nuts labeled M.” This is much more user friendly. 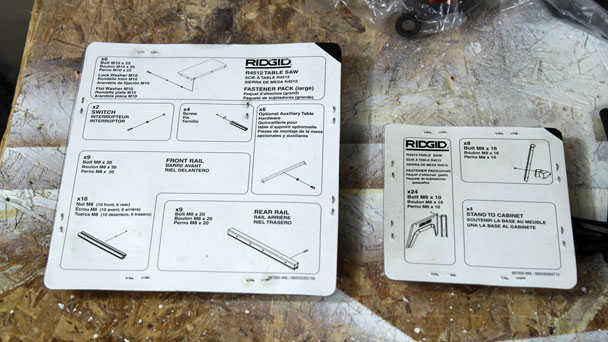 First the wings get lightly bolted on. And a cameo appearance of my cell phone. 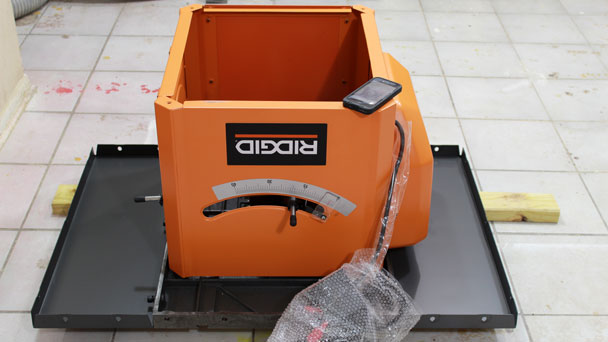 The base gets bolted together separate of the top. 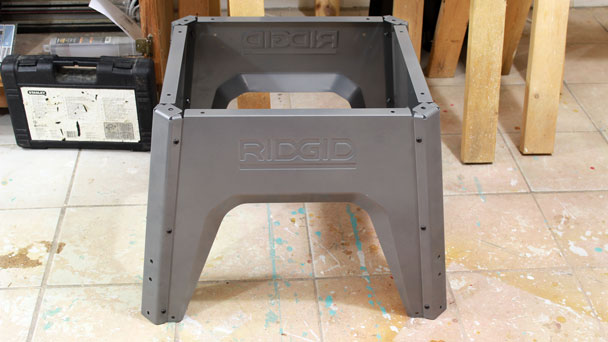 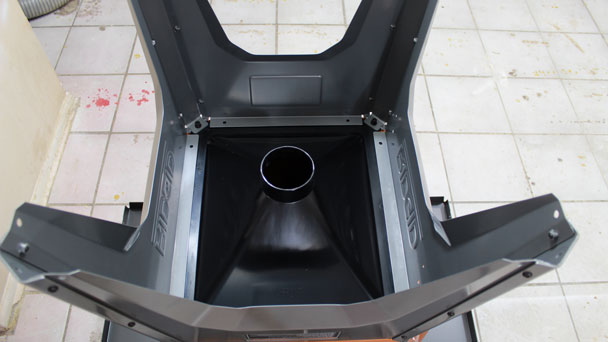 Next the caster assembly is bolted to the stand, the fence storage brackets get bolted to the cabinet body, and the stylish shoes snap on. 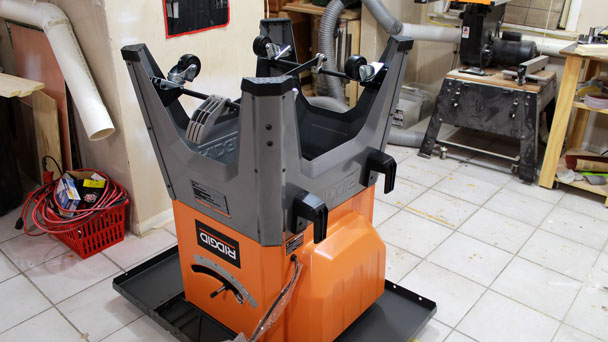 Between the last pic and this next one the saw needed to be flipped on its stand. This is one of those jobs where if done by yourself you’re either going to A get a hernia or B accidentally let one rip. Luckily A didn’t happen and I was able to install the front and back rail and make sure the tables were flush with the cast iron. 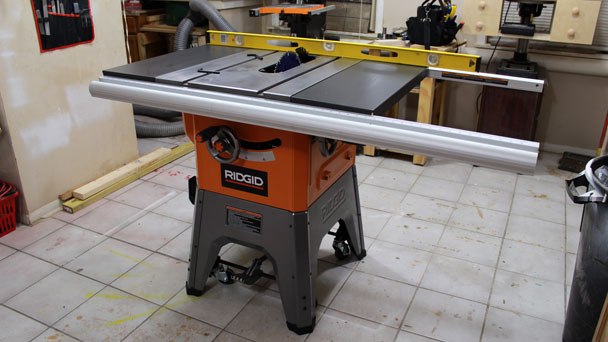 The part of every tool purchase that I dread is getting rid of all that nasty shipping grease. A wipe down with mineral spirits quickly removes all the built up grease. Followed by a few wipes with lacquer thinner to remove all the residue. And a coat of cheap wax for protection. 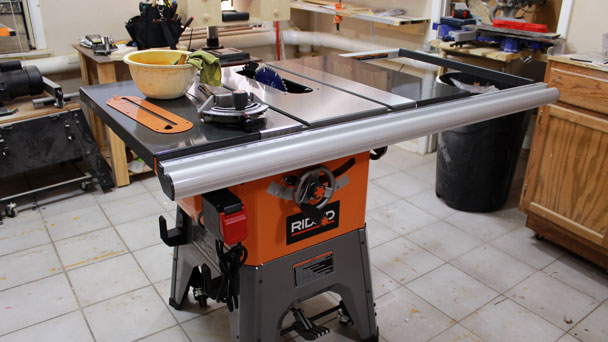 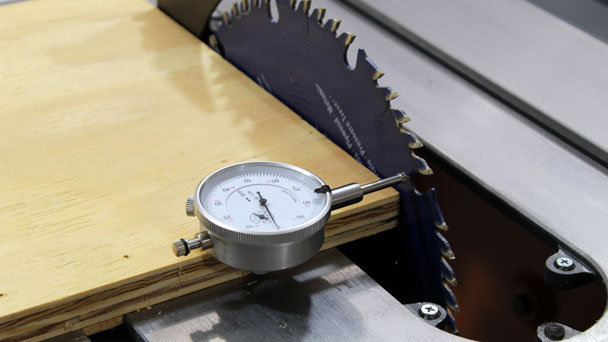 After reading further into the assembly paperwork I found the blade alignment to be quite easy actually. By taking the back cover off you can easily access four trunnion bolts to adjust alignment. I’m not sure if this is something that was added or changed somewhere down the line but I had absolutely no problems with aligning the blade. 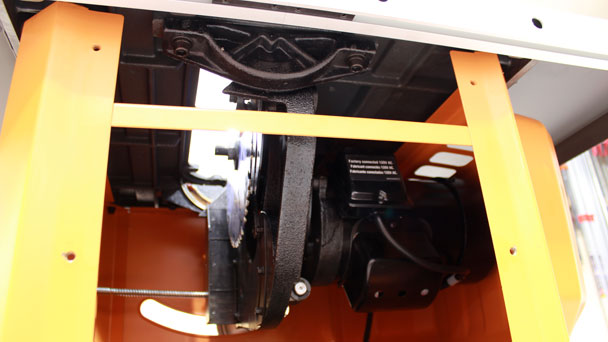 And checking the blade to be square to the table top. The stops seemed to be accurate from the factory here. 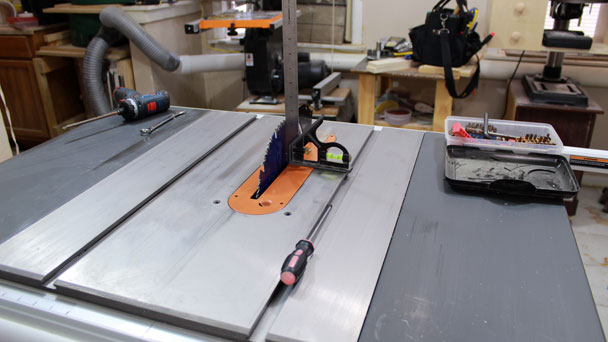 The last thing to adjust is the fence. It too needs to be parallel to the miter slot. Adjustment is made by four bolts connecting the actual fence rail to the fence body. 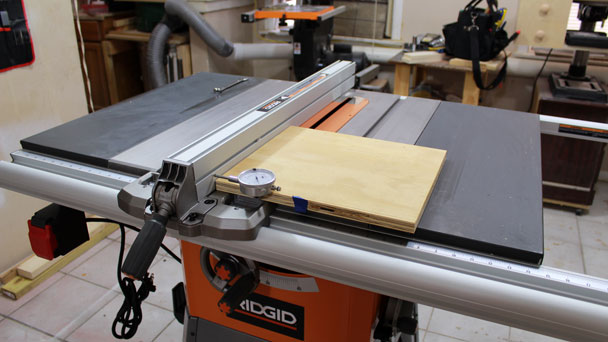 To answer a few questions that you probably have. Is this RIDGID a better table saw than my Porter-Cable? I don’t think so. Is the Porter-Cable a better table saw than this RIDGID? I don’t think so. The Porter-Cable had a couple areas that I like more and this RIDGID has a couple areas that I like more. Looking at the big picture the saws are pretty much the same. Both are a great option for the price range. Remember that I was originally going to replace the Porter-Cable with the exact same model. This is one of those situations where us as consumers are fortunate to have competition between companies to produce another saw in the same budget range that offers pretty much the same quality.

Well folks, things took a big turn with the new table saw. I checked and checked and checked to make sure I didn’t have the trunnion issues associated with this saw. Apparently either I didn’t check good enough or something happened after a couple days because I noticed it big time today. When raising the blade the blade will tilt to the right by a few degrees and when lowering it will tilt to the left by a few degrees.

This saw has a boat load of awesome reviews on various sources online and nearly all of the few negative reviews point to this issue. So that tells me I got a lemon.

I contacted Ridgid and they know the exact problem and say it is a bad trunnion that needs to be replaced. My options are to drop the saw off at an Orange store for them to ship it off to be replaced, return it for another one and risk the hour drive each way to see if it has the same problem, or drive to an authorized repair location. Either way I have to make multiple hour long trips to get the problem situated and could possibly be out of a saw for who knows how long while it gets repaired. No thanks. I’m returning the saw this weekend and will be spending more time this go around looking for a replacement.

If they fix this issue permanently I’d give it two big thumbs up. Pretty good saw if you get a good one. I didn’t and I don’t want to waste my time making it a good one. 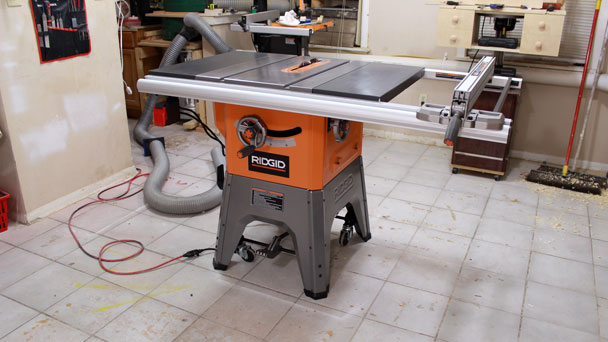