A crosscut sled is probably the most commonly used sled for the table saw. It allows you to accurately and safely crosscut larger panels with ease. While I have used several different crosscut sleds over the years the style crosscut sled I prefer is the one sided sled. With the entire sled to one side you are less likely to stand directly behind the blade which some may consider a safety bonus but for me the main reason I prefer to stand to the side when crosscutting is so that I don’t get sawdust thrown in my face. 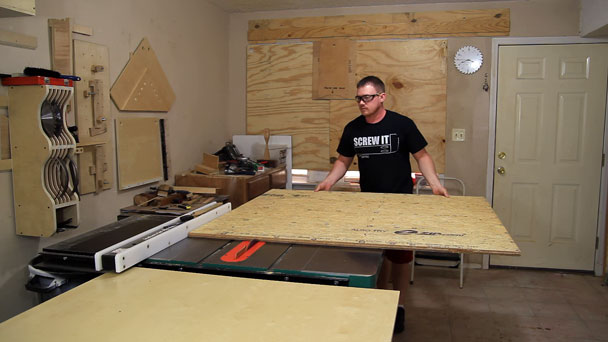 I chose to make the entire sled out of OSB. So the first pieces to be glued up were the front and back fences. Each fence will be two layers of the OSB. Me, Myself, and I waited for the glue to dry. Pretty boring company. They didn’t say much. 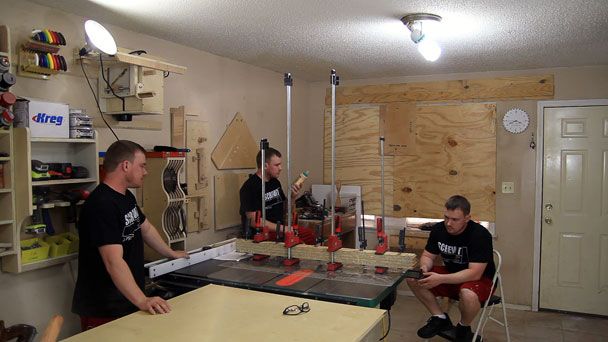 I cut the runners the same way I did for my miter sled a few weeks ago. I used my dial calipers to measure the width of my current runner, subtracted the width of the miter slot, and adjusted the fense the exact difference which gave me a perfect runner on the first try. 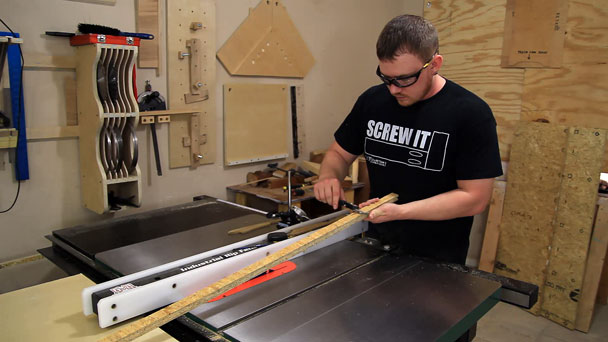 I cut the runners for all of my sleds to the exact dimensions of my miter slots. Some prefer to make them thinner than the slot itself to allow room for dust. I’ve never had a problem with cutting mine to the full depth. After they are cut and in place I can glue on the sled surface itself. The OSB I am using contains a resin that gives it great water resistant characteristics. Because of this I made sure to allow more than enough time for the glue to dry. 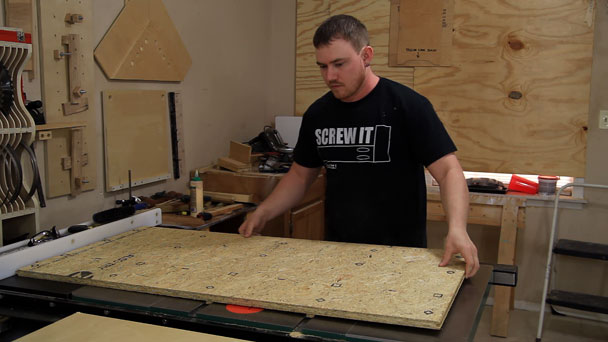 With the front and back fences out of the clamps I used my multi-purpose hold down jig to joint one edge of each fence. After one side was jointed they were ripped down to 2-1/2” for their final height. 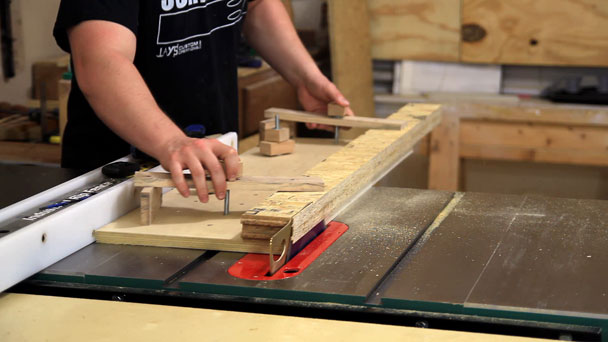 After cutting the 45 degree kerf and separating the left and right sides of the sled one screw is used near the kerf line to secure the front rail to the right side of the sled. This will allow a pivot point to adjust the fence. 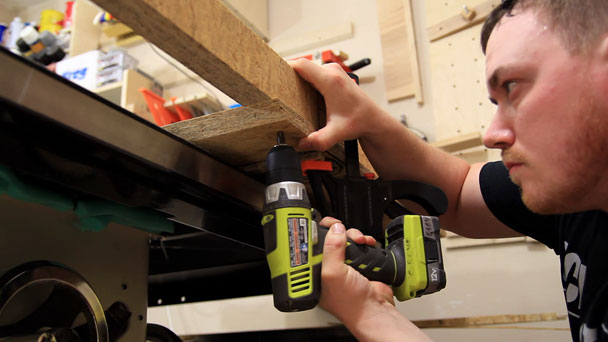 And then the fence can be adjusted with a framing square. There are several other methods out there to really dial in the accuracy of the fence but I’ve had good results with just using a framing square so that’s the route I took. 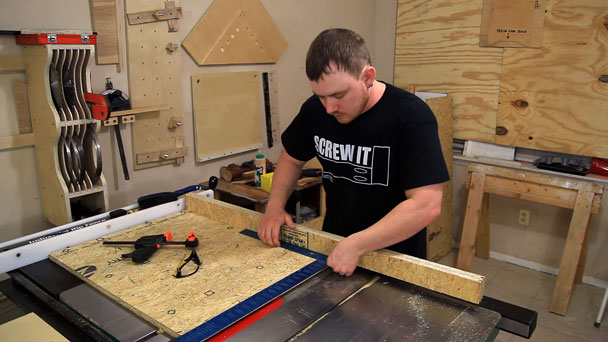 After the fence is where it needs to be the rest of the fence can be clamped down and secured with screws from below. Or from the top if you flip it over like I did. 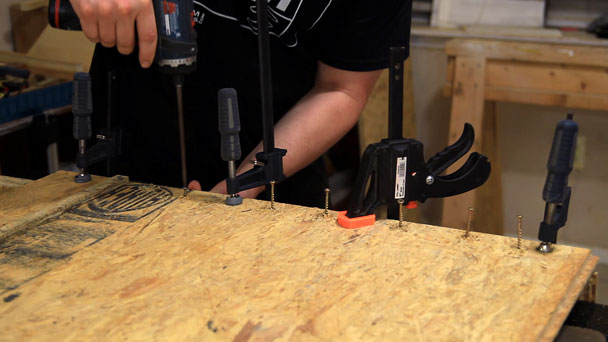 Because my miter slots are a different distance to the blade this sled can serve a double duty by rotating it 180 degrees and cutting another kerf at a different blade angle. I didn’t cut the second kerf today but I did want to be prepared for it so I made sure the back fence was also perpendicular to the blade. It’s fastened down with screws in the same way. 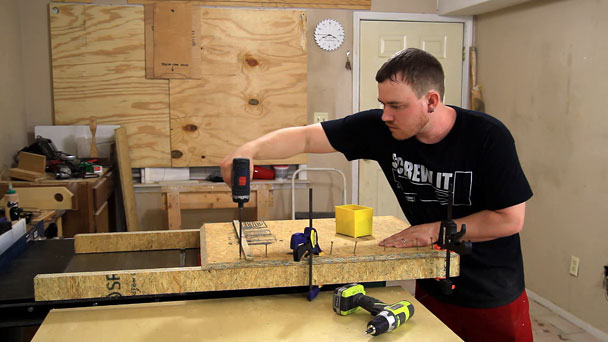 Finally the remaining side can be installed and screwed down. 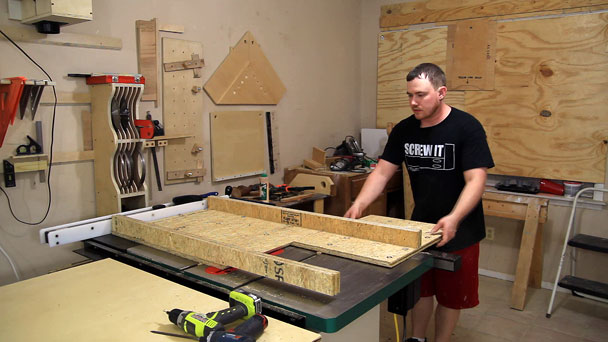 I ripped 4 slices off of a scrap piece of OSB to test it out and couldn’t be happier. 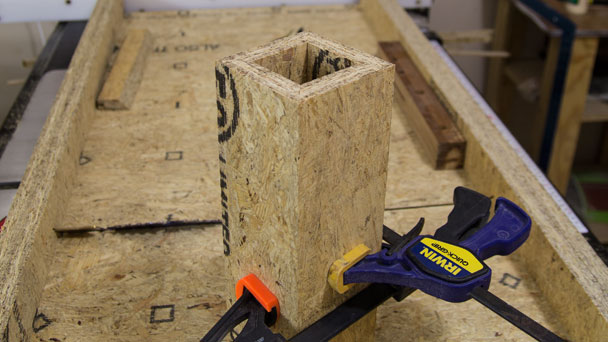 I would have preferred to use 1/2” plywood for this sled but the OSB was free so that’s the route I went. I’m very pleased with the way it turned out and hopefully I will be putting it to good use soon. 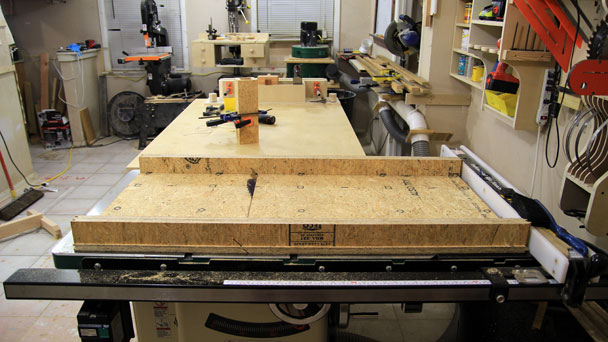 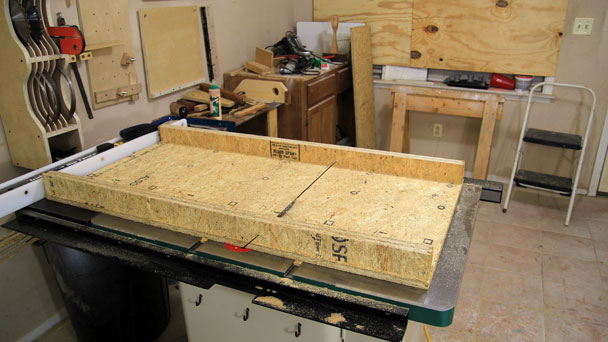 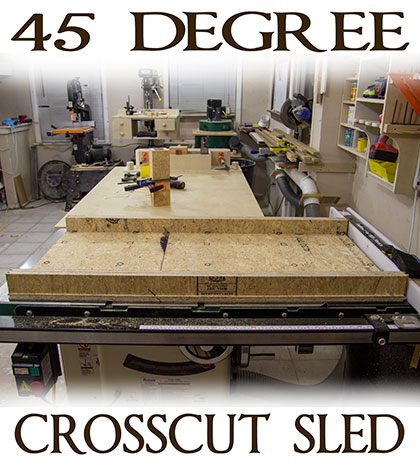