Every time I think I have a brilliant idea I Google it only to find out that it’s not quite brilliant and actually pretty common. Google confirmed that what I was trying to do was already successfully done by other people. But this idea started out back when I had my older Porter-Cable table saw setup. That particular saw had a decent fence system and I always wanted to increase the capacity of the fence rails by simply mounting the fence further right on the table saw. While I never got around to implementing the idea on that table saw it was always in the back of my mind.

Fast forward a few years and now I have a much larger Grizzly 0690 table saw. Hopefully the last table saw I own. This saw has a common t-square style fence system that rides on a long square tube in the front and a u shaped length of steel in the back. What’s really great about this type of fence system is it allows for easy modifications or replacement whenever you want.

The Grizzly 0690 table saw has roughly 29-1/2” of rip capacity to the right of the blade with the stock rails. While there is a set of much longer rails that can be ordered for this saw I really don’t have the room for increasing the rip capacity by 30” or so and quite honestly I can’t justify the expense even if I did have the room. This stock fence system also has a rip capacity of about 12” (had to look it up in the manual) to the left of the blade that is nearly never used. My thinking here was to move the fence rails to the right to transfer some of that unused space and hopefully get me closer to the magic number of 36” rip capacity. I was shooting for 36” because that’s a common cabinet height.

First things first, I had to dust off the old socket set and start disassembling. 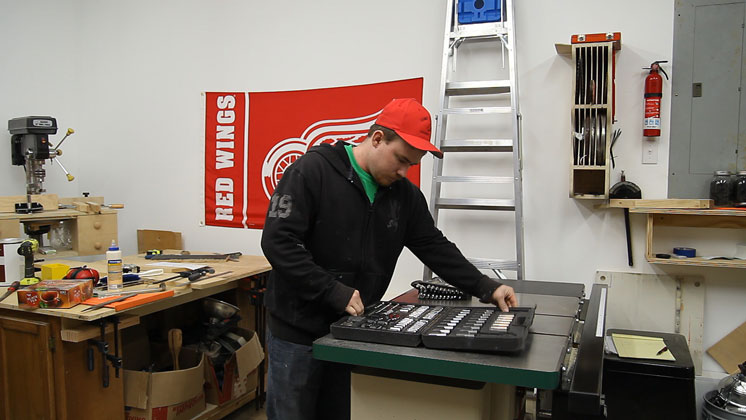 Four bolts need to be removed to free the particle board extension wing. 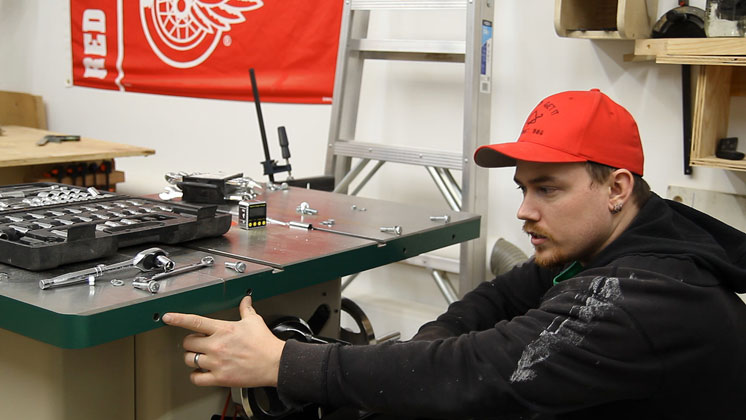 With the rail off I took the time to clean the mounting surfaces again and started installing the front rail positioned one bolt location to the right. 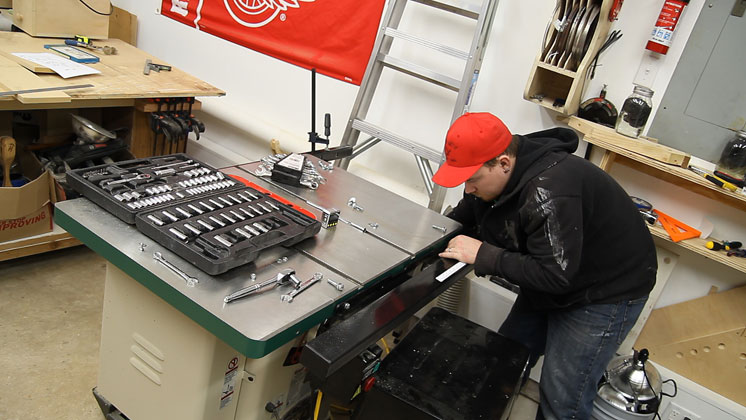 And of course the rear rail gets moved over as well. This rail is only used to support the back end of the fence. I might mount an outfeed table of some sort to it later though. 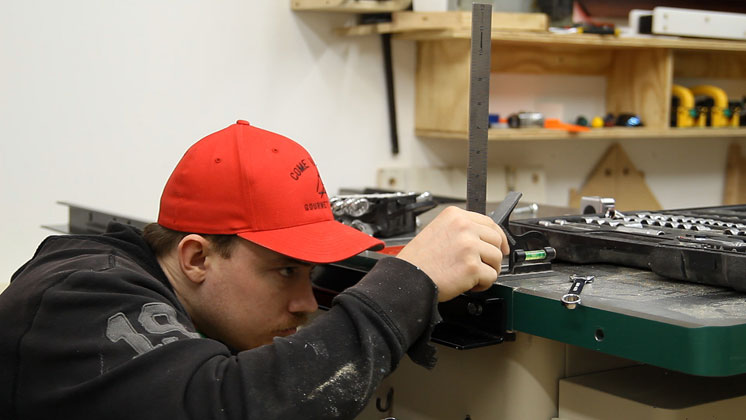 With the front and back rails positioned the particle board extension wing can be installed again. Some gentle persuasion with my wooden mallet and the bolts partially tightened makes this task pretty easy. 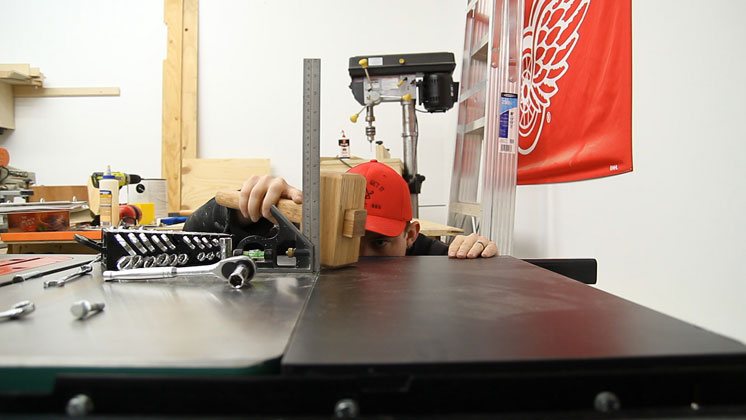 One thing I was almost certain was going to happen was the original fence ruler not lining up with the looking glass on the fence. This fence allows for a left or a right mounting looking glass though. I originally mounted it on the left side which is where I prefer it to be. Even after moving it to the right I was still 3/8” shy of it actually working. Luckily I had already purchased a new steel tape ruler just in case. 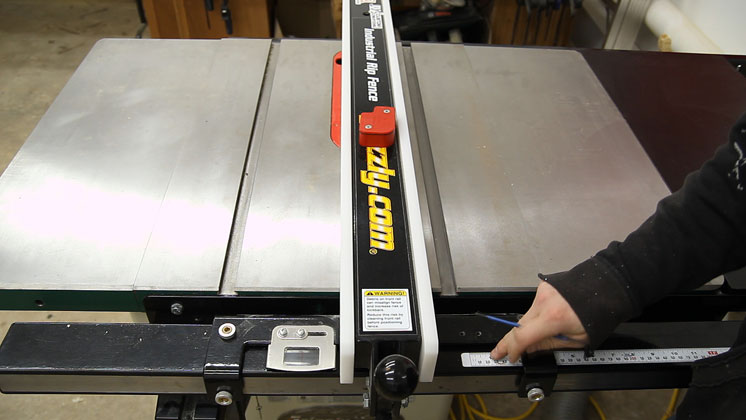 I removed the old ruler with a scraper and some generic WD-40. Mineral spirits or lacquer thinner would have probably been my first choice if I had them. Because this shop doesn’t have a utility sink like my last shop did I have tried to stay away from chemicals whenever possible lately. The only bad thing about using a new ruler is that the one I picked up ended up being about ½ the total height of the last ruler. It’s not the end of the world but having a wide ruler is much preferred.

So after a half hour or so in the shop I gained 7” of rip capacity to the right of the blade without spending a dime or making anything. I just modified what I had. I did spend $5 on the new ruler but technically speaking it isn’t 100% necessary in gaining the 7” of rip capacity. For that reason I’ll still consider this a free upgrade. It would be great if this article stirs up a little thinking to see if your table saw and work flow could benefit from a little extra rip capacity. And hopefully it would be free for you as well. Have a great week folks! 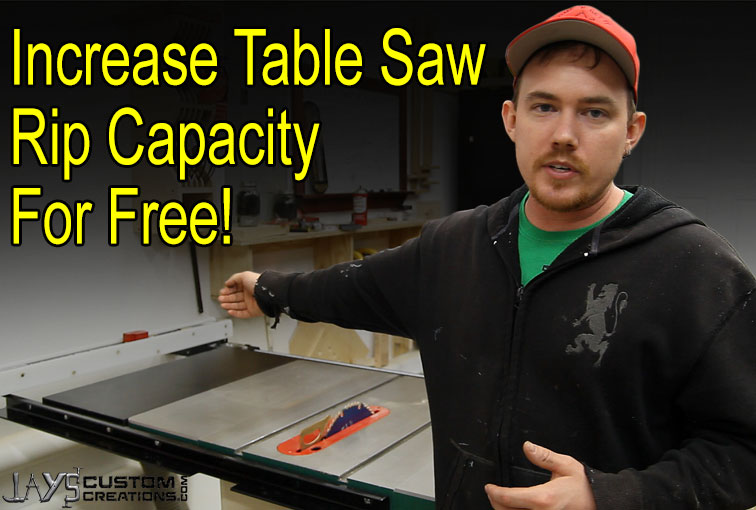