I probably move stuff around in my shop more than most people but every time I do make shop changes there is a reason behind it. Over the past few months I’ve wanted to move a few things here and there to accomplish small “wins” but individually they weren’t really motivating. I’ve also been wanting to make a traditional, solid wood workbench for ages and deciding to go forward with building one this winter was all the motivation I needed to get these small “wins” completed.

Since making my modified Paulk workbench (<–It’s not a bench, its a work table) it’s made me really, really want a solid mass workbench. Something you can pound on with chisels and a mallet and have your material not bounce around. Don’t get me wrong, making the modified Paulk workbench was a great decision. I love it, actually. It’s a fantastic assembly and power tool work table. And the array of dog holes has proven to be more handy than I originally thought. But when working with hand tools, which is something I do more often than what I show in videos, its incredibly lacking.

The style workbench I’m leaning toward is a French style workbench. laminated beam size legs and rails with a 3” or so top. A traditional leg vise and maybe an experiment or two for another vise. Some dog holes but it won’t be like Swiss cheese. Five, six, or eight feet? I’m not sure at the moment. But hopefully I can get it built in early 2016. In the mean time I need to make room for it. The first step is fueling up with a Mario pipe mug. 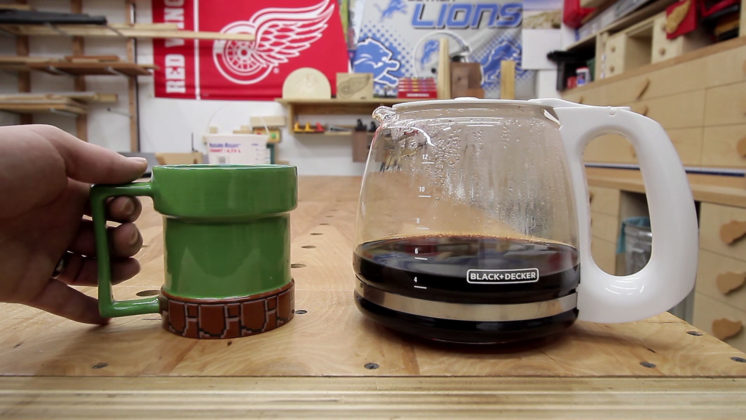 All my larger power tools and dust collection are already on the east side of the shop so it makes sense to put the workbench on the west side of the shop. That means this inefficient parking space for other rolling stuff needs to be cleared out. 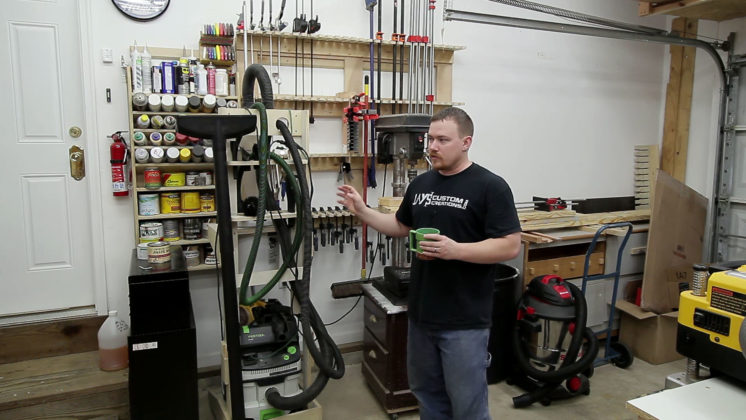 Step two: make better use of tool space. Putting my business/editing computer in the shop was a love/hate relationship. I absolutely loved it because it was incredibly convenient for SketchUp measurements and reference while working on projects. It was also nice just being in the shop environment while working on other computer tasks. On the other hand, I absolutely hated it because it was incredibly convenient for me to get distracted and quickly lose 15-20 minutes several times a day when I should have been working on the current project. I believe that’s more of a ME problem than a computer problem but the temptation just needs to go. Two other reasons to move it were that I needed the space for tools and it really doesn’t make much sense to heat and cool the shop on the two or three days per week when I’m just doing computer work. I’m already heating and cooling the house, which is where I should be doing computer work. The following picture is also a good representation of most of my previous jobs where one guy is always doing work with the boss man just standing around drinking coffee. 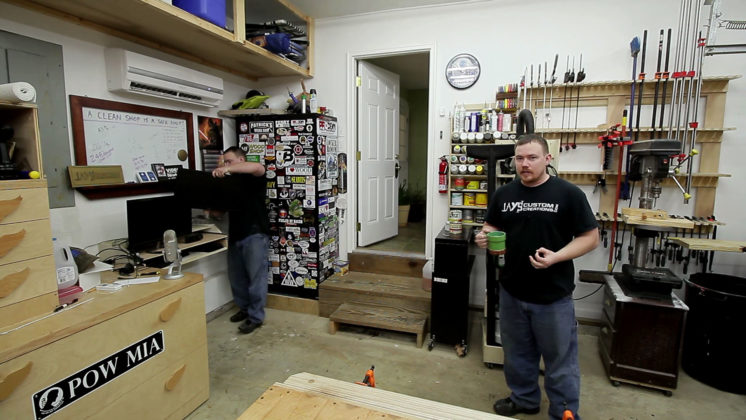 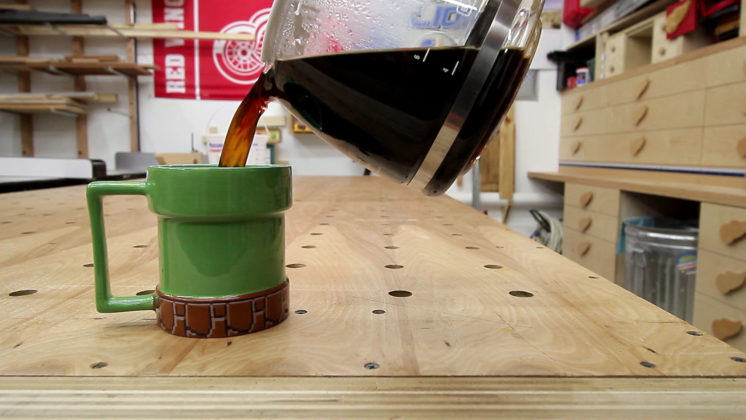 Ok, enough with the steps already. The east wall of my shop is really where I should have put my clamp rack from the beginning. Especially considering I do most of my glue-ups on that side of my work table. To move it over to this wall my small shelf needed to be cut down and moved over my jointer. I used this shelf primarily for jointer push blocks and hex wrenches for tool adjustments so it’s new location is actually a tiny bit more convenient. Of course, the flags had to come down. 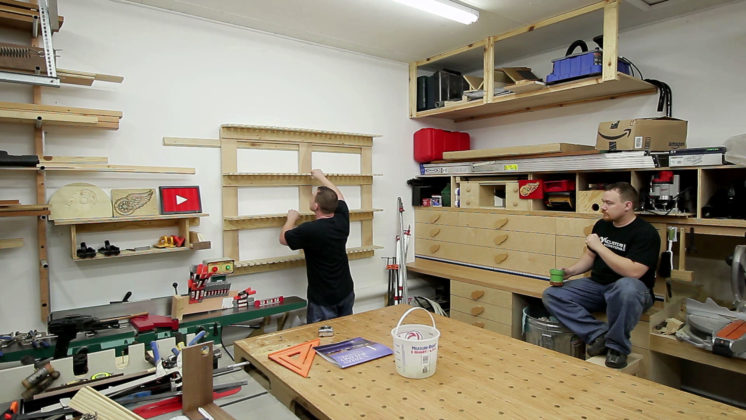 The rest of the west wall could be cleared next. I only access the inside of the sticker cabinet maybe two or three times per month so putting my rolling tool cabinet in front of it is probably the best use of that space. Rolling it out a couple times per month to access the inside of the sticker cabinet is quite alright with me. Because the workbench will be relatively close to the wall, but still with working space on that side, I wanted to clear the wall of anything that sticks out. That means the finishing supply rack needs to find a new home. 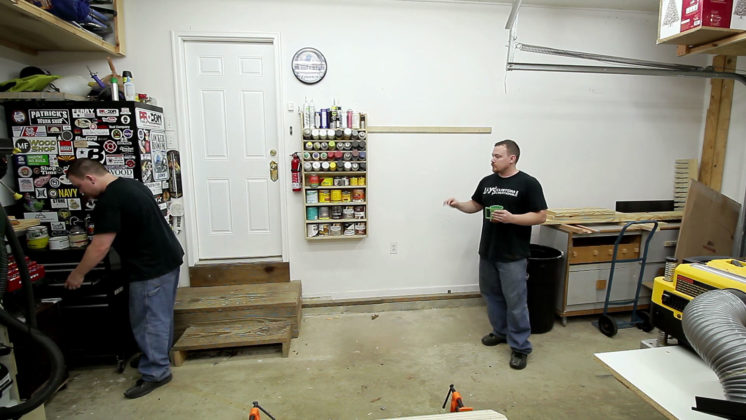 I found that rolling dresser in the trash a few years ago and have been mainly using it as a work surface or mobile sawhorses since then. It just has to go. It’s big, not incredibly useful, and just takes up too much space. I couldn’t leave the Detroit flags down though. Because they hug the wall and don’t stick out it made sense to move them over here. Also, I think it might make a pretty nice backdrop for working at a workbench :) 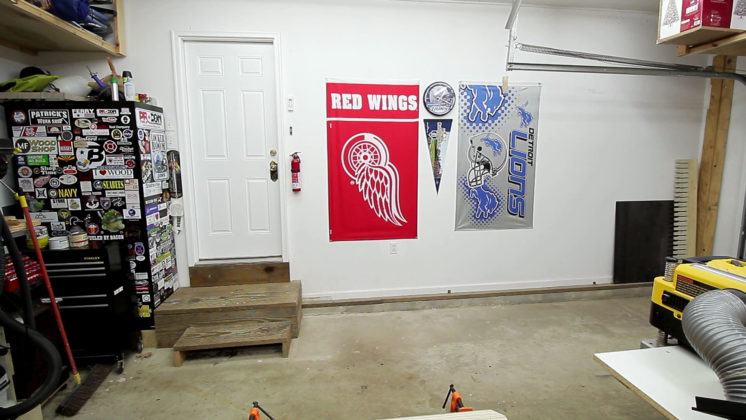 The finishing supply rack found a new home on the side of my miter saw station. I really like it over here as it’s out of the way but still convenient. I put it on drawer slides so it can be pulled out as needed and also easily removed if greater access to the breaker panel is needed. I completely understand that some people will freak out about putting something in front of the breaker panel but like I said, it can be easily removed if needed. This whole area is a much more efficient use of space compared to having my computer here. I have also drifted away from using that dry erase board so putting stuff in front of it isn’t a deal breaker. 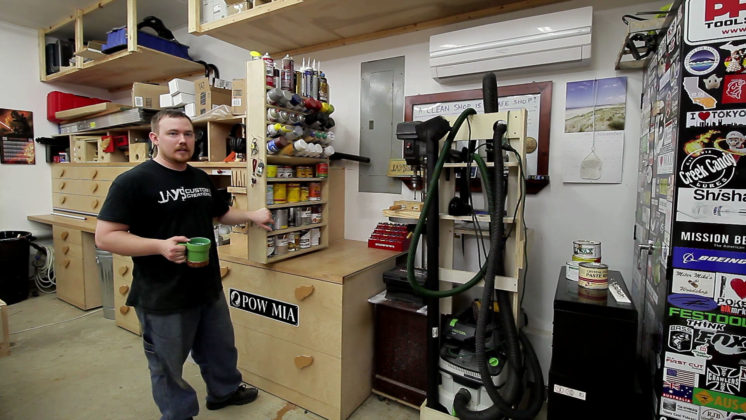 This turned out to be quite a productive day. I ended up getting a lot of free space for a workbench. From the planer to the flag wall is eight feet and from the garage door to the house steps is fourteen feet. 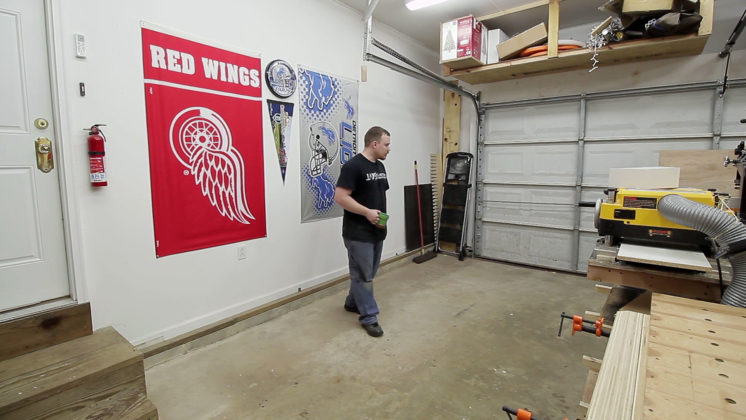 The shop has come a long way in the past fifteen months that I’ve been working in it. It’s crazy how much the shop seems to shrink as time progresses. For me, this shop has been a great lesson on how staying organized and efficiently using space can result in an easier work experience and more enjoyment. But I’ll have to enjoy it while I can. I know there will come a time when I simply cannot fit more stuff in this space without having my table saw, bandsaw, work table, and miter saw station hoisted to the ceiling on a motorized overhead trolley system….hey, now that’s an idea!! 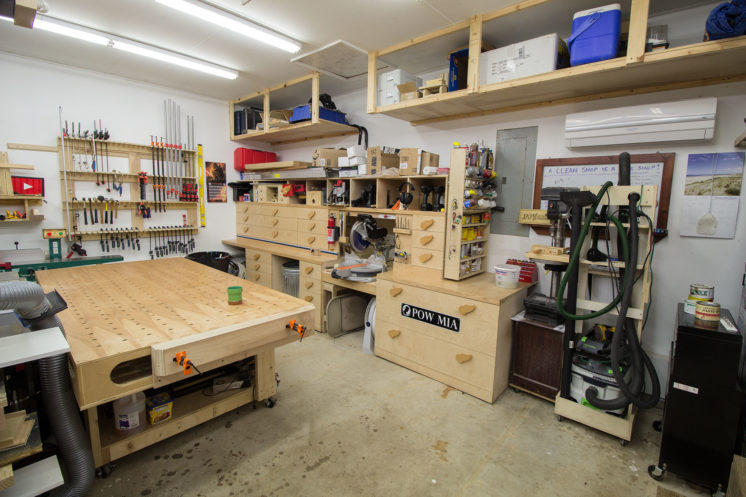