Tools come in all shapes and sizes with optional gizmos and gadget attachments for this and that. Often times the decision to purchase a commercially available attachment is for the precision offered in the manufacturing process and other times its simply more convenient to purchase rather than make the item. The later was the case when I purchased an edge guide attachment for my last plunge router. I wanted an edge guide for a task and it was just convenient to purchase. Purchasing isn’t always an option though and if it is it isn’t always the best option.

For the vast majority of tools, jigs, and accessories in the woodworking world there’s always the option of making your own. You can even make your own fully featured bandsaw or table saw these days. I recently upgraded from my Bosch 1617EVS router kit to the Milwaukee 5616-24 router kit and while it is a substantial upgrade (more on that in a later article/video) I found that my previously purchased edge guide won’t work with the new plunge router. That’s acceptable though as the edge guide wasn’t a universal edge guide. So after looking at a few examples online I decided to make my own edge guide specifically with mortising in mind.

The style edge guide I made features two adjustable edge guides and can be adapted to ANY router with a removable base plate. Simply remove the base plate, mark the mounting holes, drill, and attach. To make this jig I gathered a few items I already had in the shop. This makes the jig pretty much free as all the items were left over stuff I had on hand. I used a 12” wide piece of 1/2” plywood cut to 10-3/4” long, four 1/4-20 machine screws, four 1/4-20 wing nuts, and four washers. 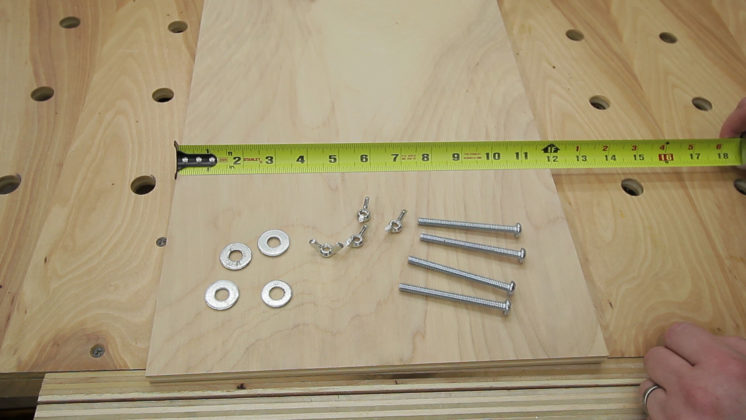 After cutting the scrap plywood to the appropriate length I laid out for my slots and found the rough center point for the router bit. I made the slots slightly wider than the 1/4-20 machine screw and they were 1-1/2” in from the sides and extended from the front of the plywood to 1-3/4” away from the back of the plywood. The 12” width of the plywood was the front face by the way. 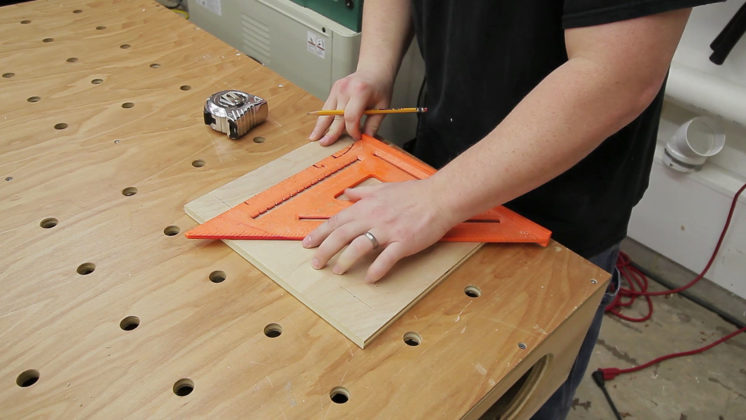 To make the slots I used my bandsaw. Set the fence to cut one side of the slot, flip the board and make the same cut on the second slot. Then move the fence over by just a tiny bit more than the width of the 1/4-20 machine screw and repeat the cutting process to cut the other side of each slot. A table saw or jigsaw can also be used for these cuts. 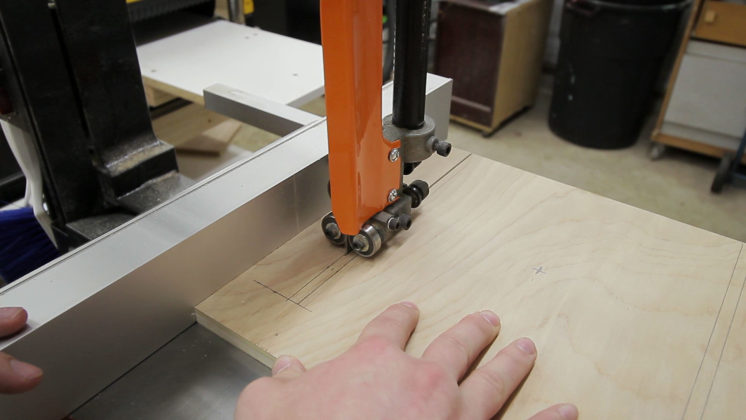 A drill bit is used to finish the slot by connecting the two bandsaw cuts and releasing the interior slot material. It’s better to drill the hole after the bandsaw cuts were made rather than before. This way you won’t accidentally make the holes slightly offset to one side. The slots are there so you know exactly where to drill. 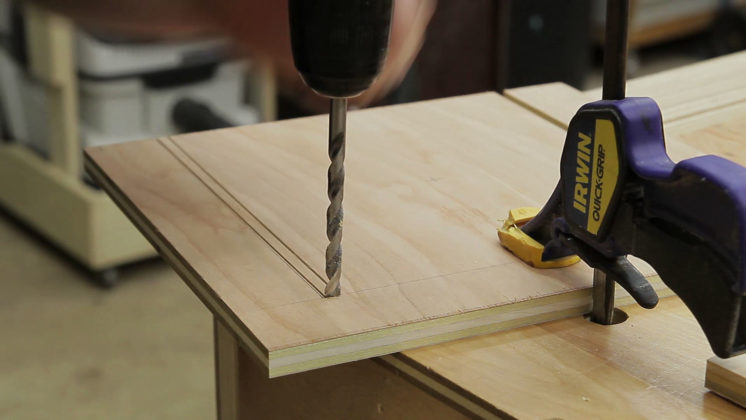 For the adjustable parallel guides I used a piece of scrap oak. First cut to length at the miter saw and then ripped into two smaller pieces. I believe these ended up being about 3/4” x 5/8” in size. I really like using my 2x scrap wood push stick for cuts like this. Because the push stick is 1-1/2” wide and has a 1-1/2” wide shoe at the end downward and forward pressure are transferred to both pieces of the cut. And because the push stick itself is scrap dimensional lumber it acts as a sacrificial surface to cover the top of the blade as the push is made. 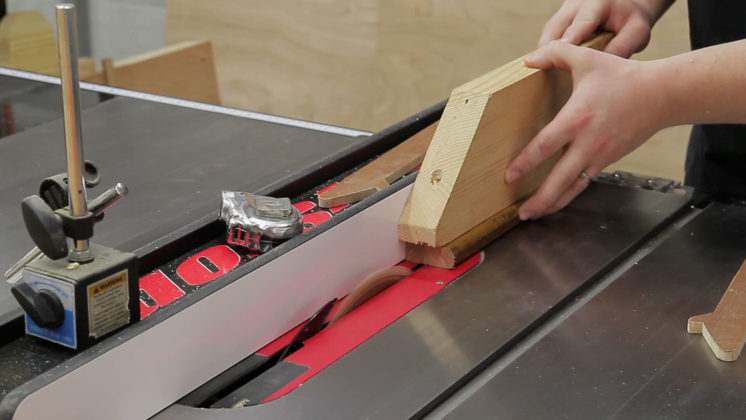 With the parallel guides cut I used the slots themselves to eyeball the drilling points in the guides. The slots are slightly wider than the machine screws that will be used so there is some room for error when drilling the holes. 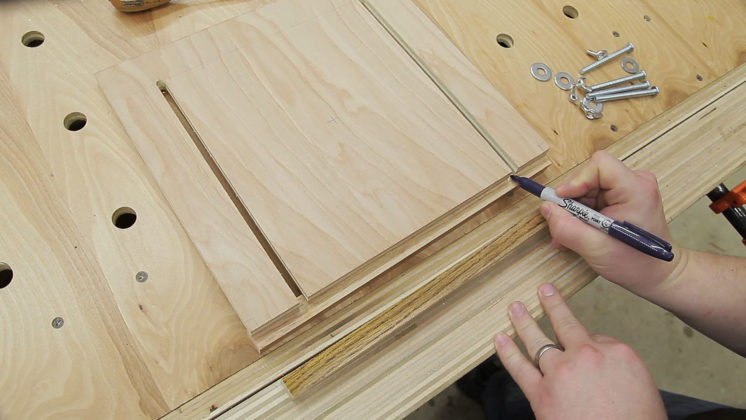 I wanted to lock the machine screws into the guides without using any glue or added lock nuts. The easiest way to do that is drill a slightly undersized hole and thread the screw through as normal. The machine screws are 1/4” in diameter so I used a 7/32” drill bit. I didn’t trust the operator of my hand held drill to drill a perfectly perpendicular hole so the drill press was used here. 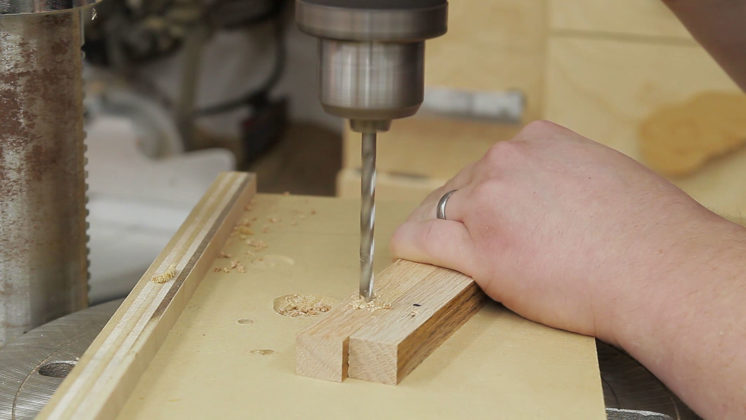 Simply driving the machine screws into the oak will lock them down. The holes are slightly undersized as mentioned previously so the screw threads essentially tapped the hole. Driving them all the way down is all that is needed to secure them. 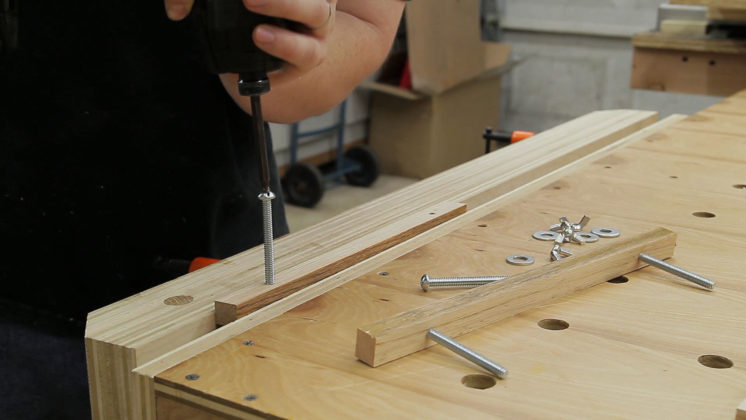 Because I’m using whatever materials I had on hand the machine screws ended up being a little longer than I liked. I probably could have just left them as is but I figured somewhere down the road I would plunge down with the router and somehow my hands would be driven right into the screws. That sounds like easy motivation to cut them shorter. After installing the guides in the jig I marked them with a marker and cut them with a hack saw. 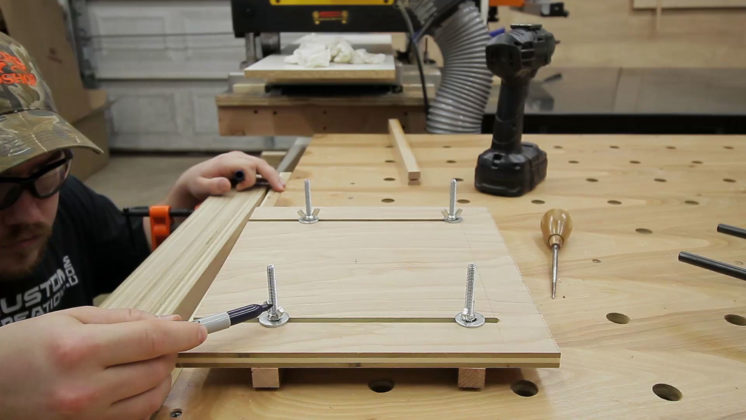 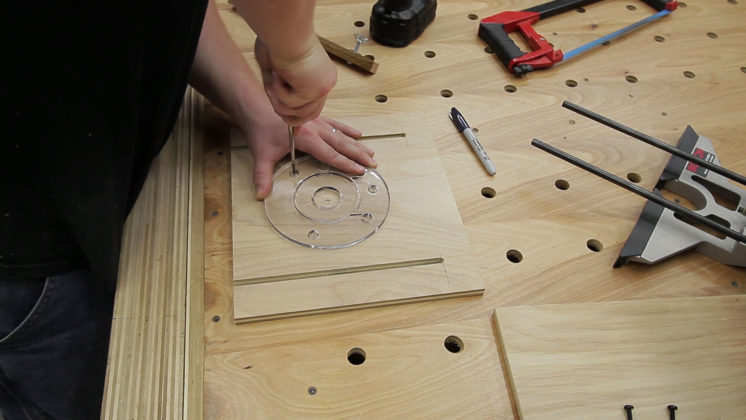 The screws used to attach the base plate are washer head screws so after the screw holes were drilled by hand I used the drill press and a forstner bit to drill a counterbore for the head of the screws. 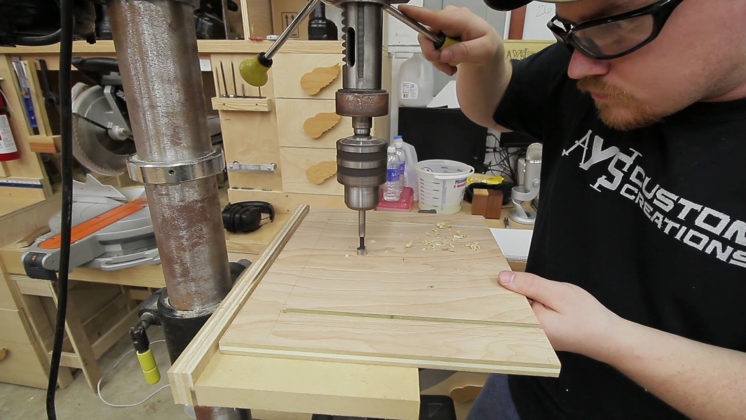 While still at the drill press the router bit hole was made with a 1-1/4” forstner bit. I was a little on the fence about what size hole to drill here. Because the base of the jig was plywood you obviously cant see through it like you can with the clear base plate on the router. So the options were to drill a larger hole so you can see your markings for the mortise more easily or drill a smaller hole so you will get more support for the jig when moving toward the edge of the material. Now that it’s complete I can say that the 1-1/4” hole offers plenty of visibility to the work piece below. 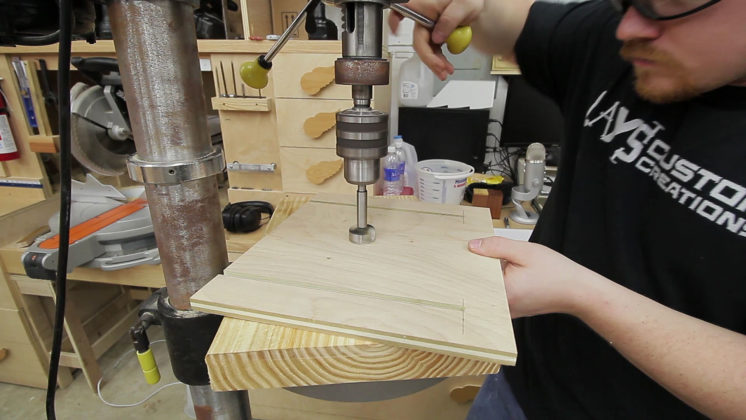 All that’s left to do is attach it to the router. Luckily my mounting holes were accurate and I didn’t need to make any adjustments there. 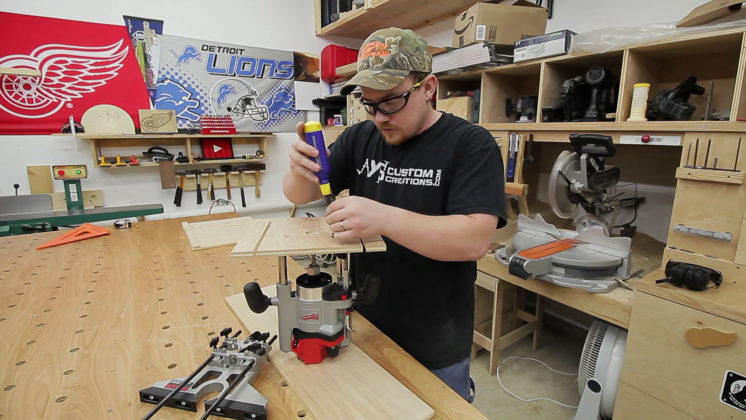 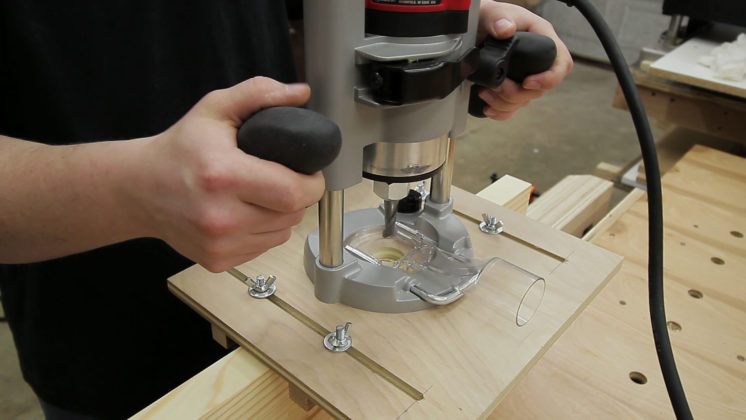 So obviously I had to test it out and make a little sawdust. The results were great, just as they should be. It’s a super simple jig that needs to complete one task and because it has two guides instead of one it completes that task very well. 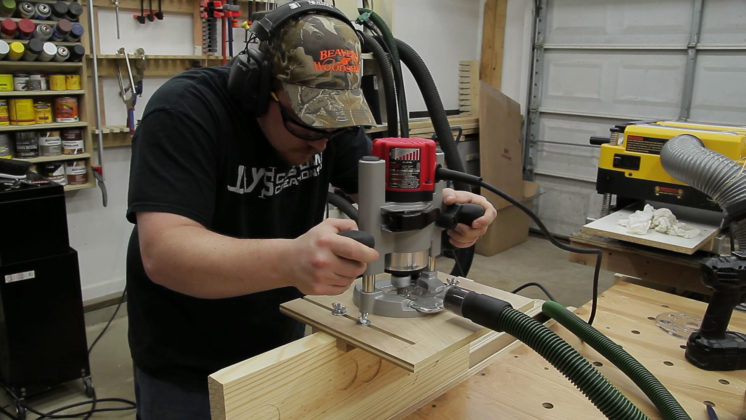 The resulting mortise was straight and parallel to the edges. I used a 1/2” up-cut spiral bit for this. While this is a super easy jig to make and all the info is right here in the article, as stated above, I do understand that people like convenience. So if you would like a brief set of plans for this exact jig just click here. 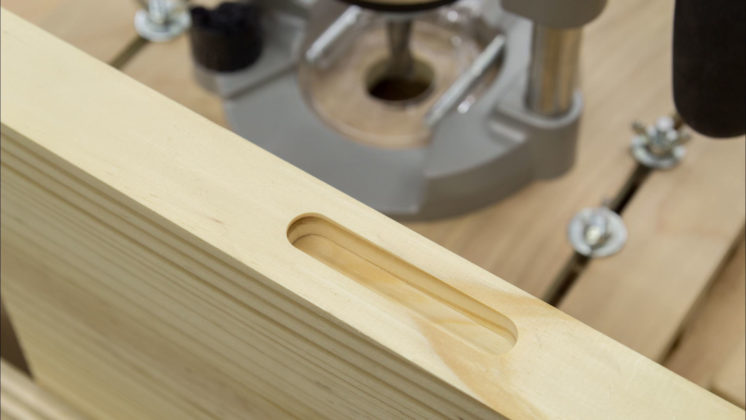 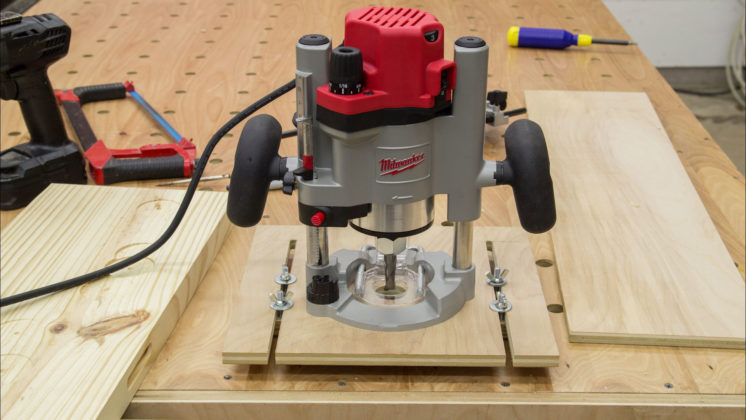 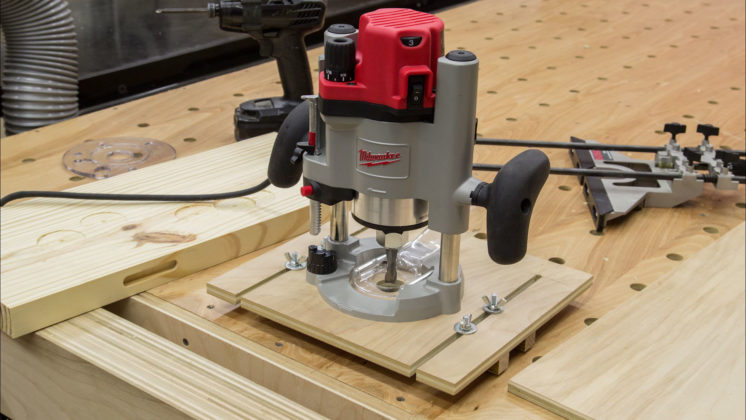 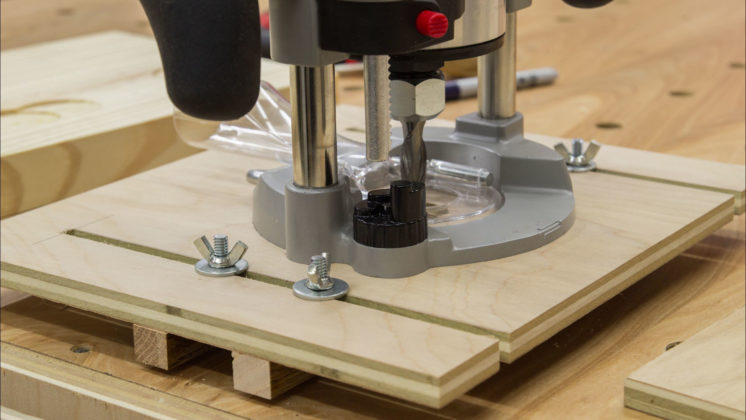 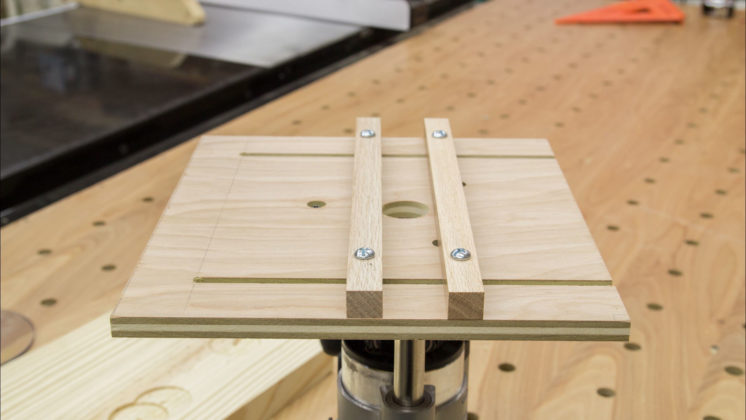 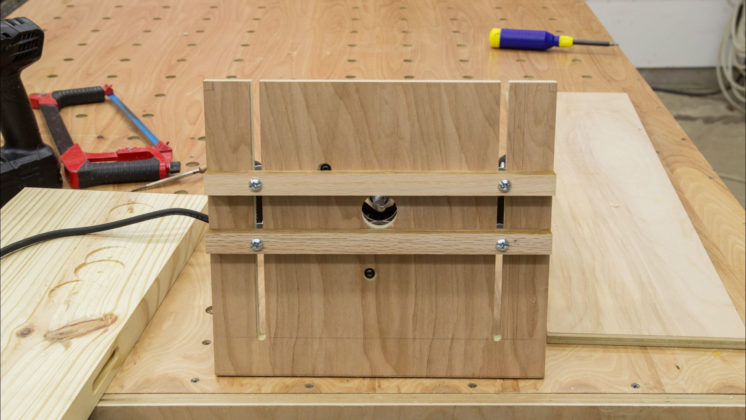 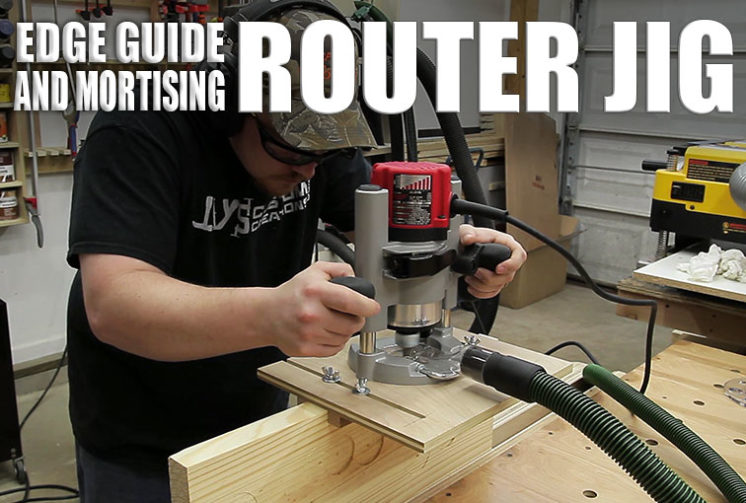