It’s been about 4 months since I had nose surgery to fix some sinus and airflow issues. Life after surgery has been so much better. Being able to breathe easily through my nose is something I haven’t experienced in a long time. While going through the process of getting my nose issue straightened out (literally) I also learned that I am allergic to a lot of airborne pollutants. One line on the list that stood out to me was the line that said “white oak.“ Finding out that I’m allergic to white oak really made sense as to why I got a really long sinus infection and eventually bronchitis right around the same time I completed an oak project last year.

So all of that changed my perspective a bit. I’ve basically got a new nose on the inside and want to keep it that way. Since the surgery I have made a few changes in the shop. I upgraded my dust collector to a unit with twice the rated CFM, upgraded my dust collection piping and connections to each tool to make the entire dust collection system more efficient, I only vacuum the shop when cleaning instead of using a broom for the majority of it, and I run my air cleaner cart as much as possible now.

In this article and video I’d like to share some measurements of the air quality in my shop in different situations. To do so I purchased a Dylos DC1100 Pro air quality monitor. I found out about this monitor by reading an article on woodgears.ca. Be sure to check out that article when you’re done here. The more appropriate way to see the true difference in air quality would have been for me to measure before the upgrades and after the upgrades. But I didn’t get the air quality monitor until after the upgrades were complete. Poor planning on my part but I honestly didn’t think I was ever going to buy the meter at all. The meter has two measurements; small particles between .5 and 2.5 micron and large particles of 2.5 micron and greater. Obviously, lower is better. 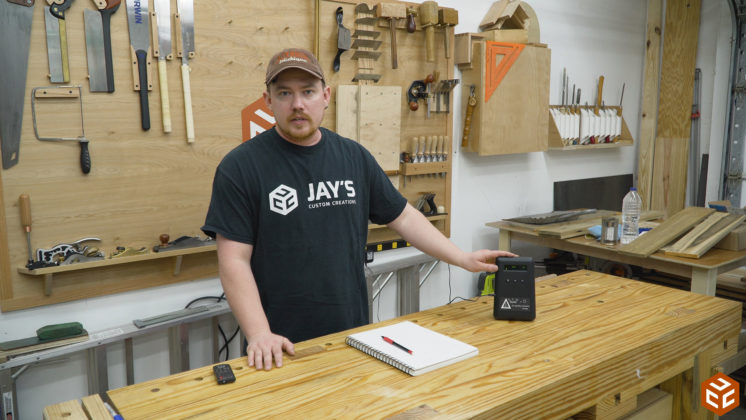 To determine a starting point for how good or bad the shop air is I measured my daily environment. The meter continuously fluctuates up or down by a few points but it’s easy to tell where the data range is. After about 10 minutes of the meter running outside on my front porch I got an approximate reading of 638 for the small particles and 105 for the large particles. From what I’ve seen online in other examples this is relatively low for outdoor air. When people in my neighborhood are burning leaves or have a bonfire going I’ve seen this meter over 10,000. 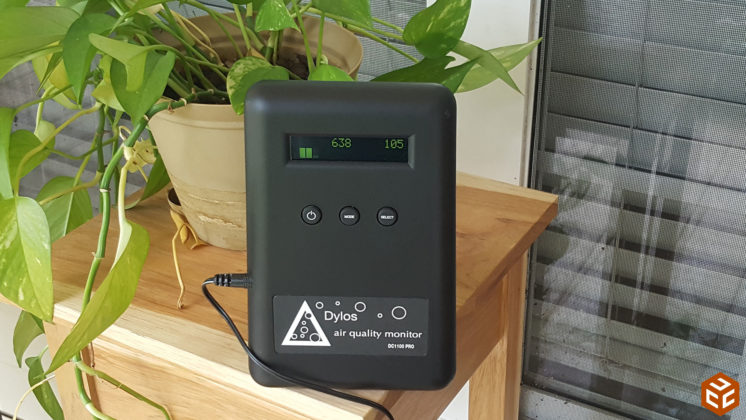 With the outside control established I went inside and got a little bit of a surprise. I put the meter on my kitchen countertop for about 10 minutes and got a reading of about 875 for the small particles and 32 for the large particles. 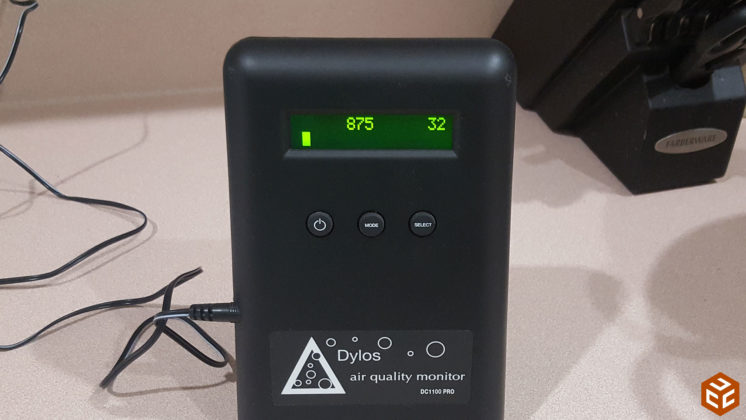 Now to measure the shop environment. Keep in mind that I already run my dust collector when running the power tools and I also use an air cleaner in the shop while I’m in there so it shouldn’t be a crazy high number to begin with. To get a good baseline measurement for the shop air I took my measurement when I first went into the shop for the day and before stirring up any more dust or moving anything around. The reading was about 435 on the small particle and 57 on the large particle. 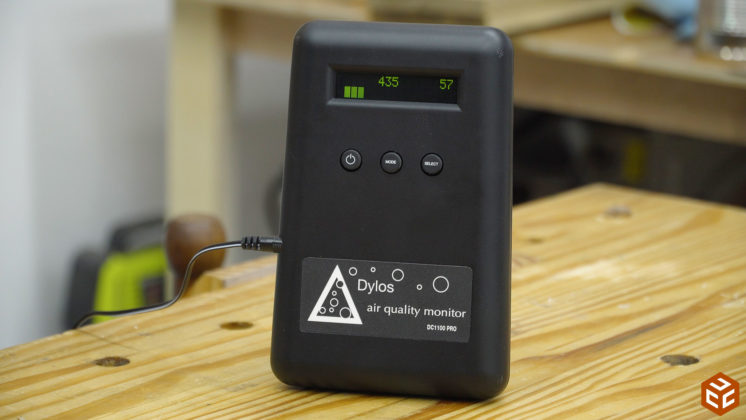 My shop is a 2 car garage in Mississippi. The outside climate is very humid year-round and brutally uncomfortable when you combine the humidity with 95-100 degree temperatures in the summer time. Because I make my living by making content in my garage I installed a mini-split AC and heat pump unit for better climate control. I also rarely open the garage door. That means I have a better chance of trapping a horrible amount of fine sawdust in the air. My main two ways to combat the fine sawdust in the air are to use my dust collector to collect as much of it as possible right at the source and use my air cleaner cart to filter the remaining stuff in the air. As we will see, they both do their job very well. 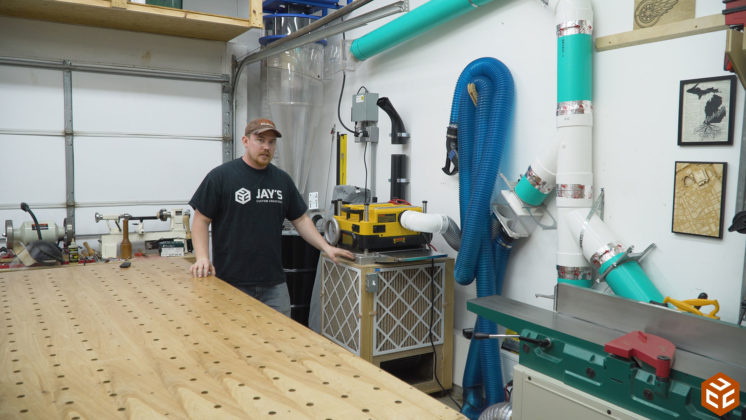 For the first test I made three rip cuts on my table saw with no blade guard or dust collection and the air cleaner cart turned off. With the Dylos meter sitting on the right extension wing of the saw I got some pretty ridiculous numbers. The highest reading I saw was 24,112 for the small particle and 13,194 for the large particle!!! That’s insane. If you don’t have dust collection in your shop PLEASE have a draft of fresh air coming in and dirty air going out. 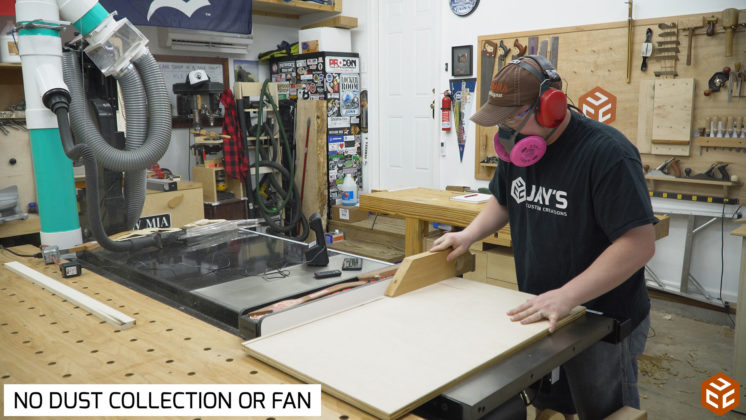 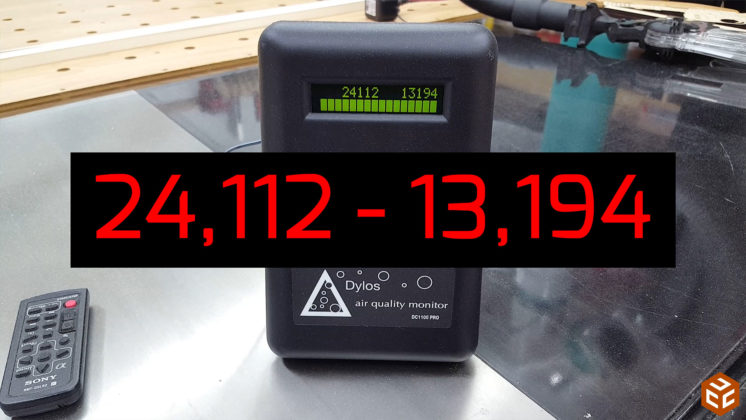 Before doing the second round of test cuts I used the air cleaner cart to get the numbers down to around the same levels as before I made the first test cuts. The next test was to make those same cuts with the dust collector running and the over arm blade guard installed. For some reason I made six cuts this time instead of three. I set up my cell phone to record the meter while making the cuts and the result was around 323 for the small particle and 78 for the large particle. 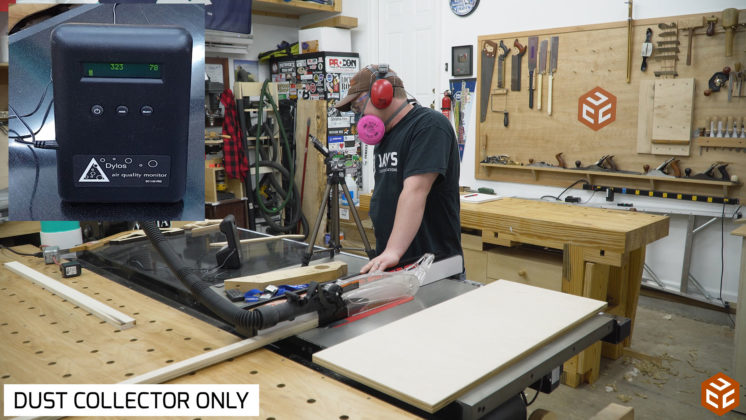 Next I repeated the same process but this time I left the air cleaner cart running the entire time. The results were a little lower at 305 for the small particle and 65 for the large particle. 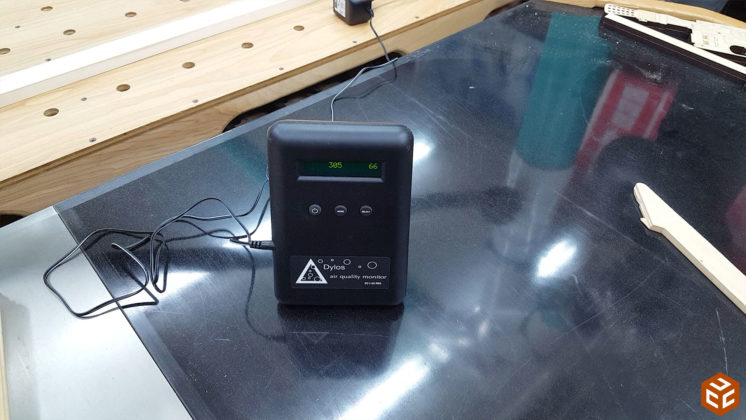 The other two major dust offenders in the shop are the bandsaw and the miter saw. I started with the bandsaw. I made seven cuts through 3/4” thick material about 20” or so in length. For dust collection I have two flex hoses secured to the top and bottom of the table with nothing more than a couple bungee cords. This works really well and allows for quick and easy removal if needed. After those cuts the meter was reading about 203 for the small particles and 63 for the large particles. The dust collector and air cleaner cart were both running during these tests. 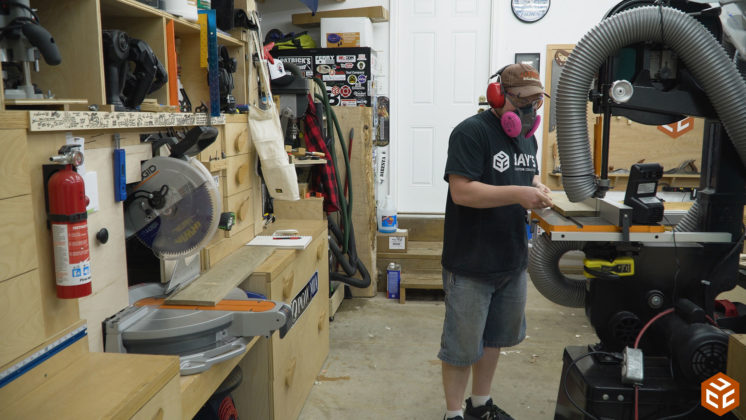 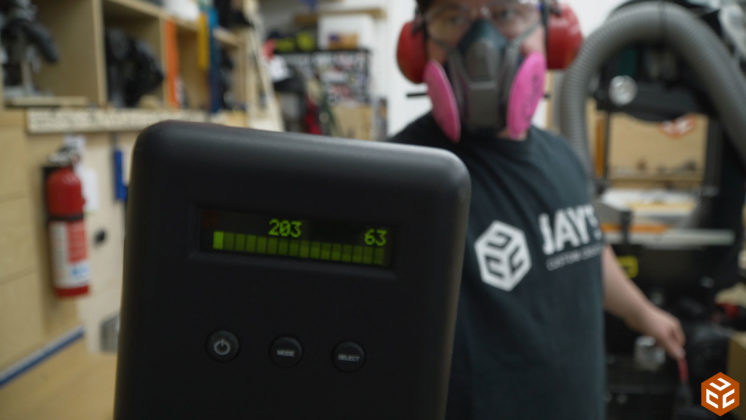 Same setup with the miter saw. A bunch of cuts with the dust collector and air cleaner cart running. The meter read about 336 for the small particle and 31 for the large particle count. 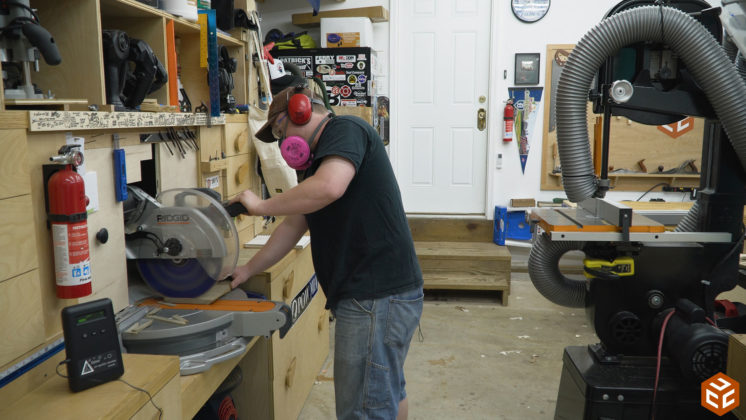 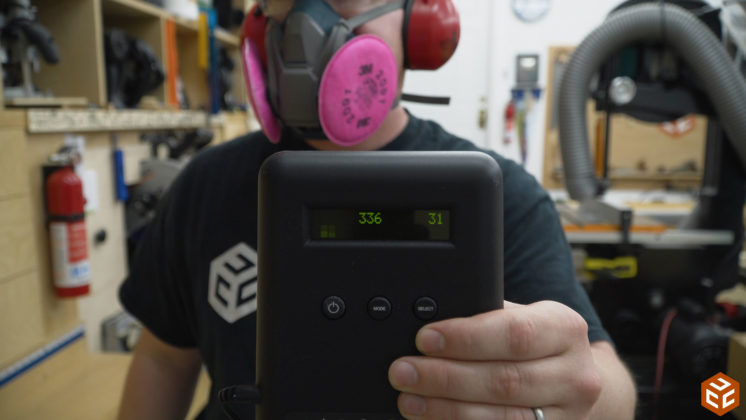 After making the tests I turned the dust collector off and left the air cleaner running for an hour while I went inside. One hour later I returned to the shop where the meter was reading extremely low. I know as soon as I open the door to the house some air will enter and the meter will go up so I ran over to the meter really quick and it was reading 10 for small particle and 0 for the large particle. By the time I shot the outro to the video the meter was reading about 15 for the small particle and 1 for the large particle. That is crazy low! 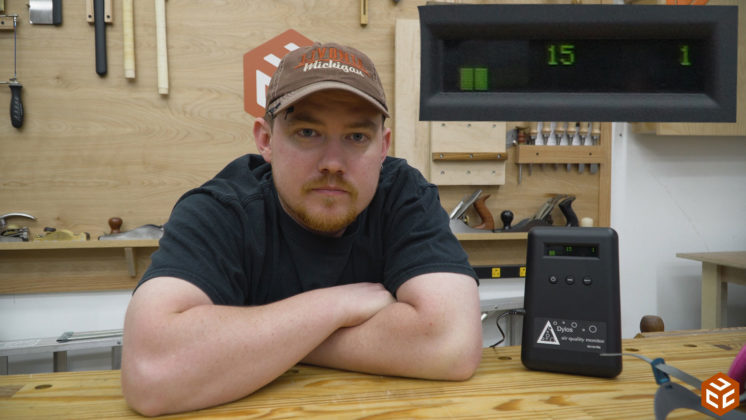 So how does everything compare? The following graphs pretty much confirm the general information and research out there in regards to air quality. Often times the air in your own home is worse than the air outside. I guess that’s where the saying “step outside and get some fresh air” came from. Running the dust collector while making sawdust lowered the particle count compared to the control numbers of the shop air. And running the air cleaner cart while the tools weren’t running made the greatest improvement to the quality of air in the shop.

What I didn’t include in the graph above is the numbers for using the table saw without dust collection attached. Including those numbers completely dwarfs the rest of the data.