I finally upgraded my shop lights from fluorescent to LED and couldn’t be happier. I contacted American Green Lights for suggestions and ended up making a complete switch. For full disclosure this isn’t sponsored, I have nothing to gain or lose if you do or do not buy their product, and I am not being paid to write this article or make a video. However, I did ask to be provided the lights in exchange for sharing the results of the upgrade, good or bad. Now that the switch is complete I’m a huge fan of the product and the results but I don’t want my opinion to be the reason you do or do not buy something. Instead, I want this article to provide actual information with an A to B comparison that will let you see the results to and use that to make a decision for yourself. As a bonus for you the viewer, Jim from American Green Lights said that anyone who mentions seeing the lights on my Instagram or YouTube videos can get a 10% discount on the product and free shipping. Simply email your desired items to [email protected].

Before we get into the results lets first talk about the “before” setup and the problems I was having. My shop is roughly 20′ x 20′ with 10′ walls. I have six 8′ T8 fixtures, each with four 4′ T8 bulbs, mounted to the ceiling. The four going in the same direction were installed a year prior to the two in the opposite direction. Same hardware vender, same product, same 6500k bulbs. I wanted to know a little more information in regards to the exact problems I was having with my current setup so I emailed some questions to Jim. In the following few paragraphs the problems I sent to Jim are in regular text and his comments are in bold.

Not the same color output according to my camera. The older bulbs have become warmer in color compared to the newer bulbs. Warmer isn’t a bad thing but them not being consistent is. ****As fluorescents degrade, color will shift as the mercury starts contaminating the inside of the tube and the Phosphors degrade

Everything is green when recorded on camera which makes the white balance difficult to set. I have to boost magenta in the camera to compensate. ***** The green color is an unfortunate characteristic of fluorescent lamps. In the chart below, you can see the peak of the light output spectrum of the fluorescent is green. Then there are specific other weaker peaks at orange, yellow, with little peaks at cyan, blue and almost no red. As you can see, the LED lights have significant energy emitted at almost every wavelength along the visible spectrum, therefore providing better color accuracy. 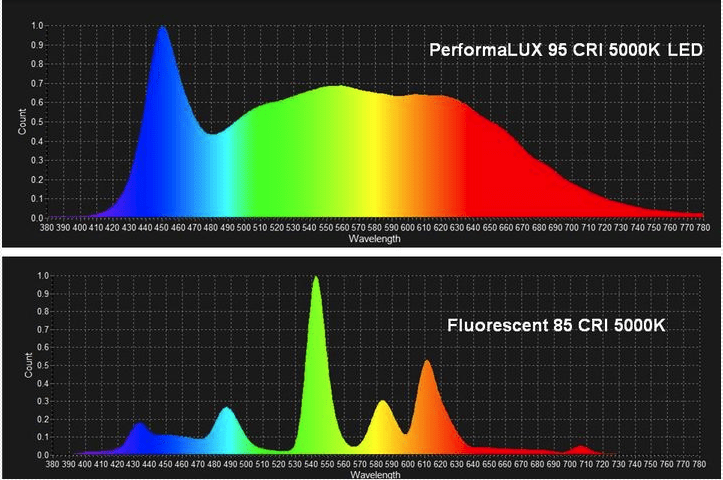 The lights are losing brightness. I shoot with a manual exposure in the shop and I’ve had to raise my exposure a few times over the past couple years with no changes in lighting. ***** Fluorescents degrade over time. Though they rate lifetime at as high ahs 40,000 hours per tube, they mean average time to complete failure, not taking into account degradation. If the lamps is operating at 10% of original lumens, it still has not “Failed” per their specs. As the fluorescents burn, the electrodes inside the ends of tubes oxidize, causing the blackening that you see at the ends of the tubes over time. As the oxidization increases, the contaminated vapors in the tubes allow less UV light to be produced, which to react with the phosphors. This causes lower light output. Another impact for people in colder climates with garage shops, Temperature will greatly affect light output in fluorescent tubes. As you can see on the chart below, at 5 degrees C (41 degrees F) the T8s will lose 49% of its lumen output compared to 75 degrees F (25 degrees C) That does not even count the loss from oxidation! 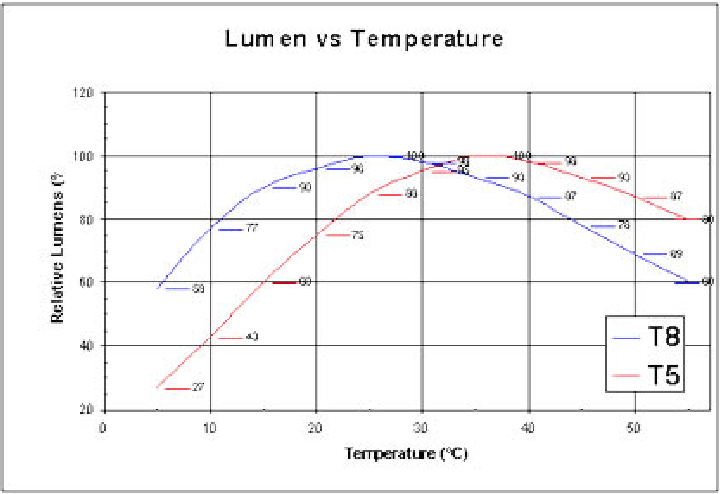 The balasts are going bad I think. Sometimes it takes a dozen flips of the light switch to get all of the lights to turn on properly. ****I think you are correct. Ballasts generally will last about 15-20,000 hours of continuous use. Each time it is switched on and off degrades and shortens the lifetime slightly. Capacitors are generally the weakest link. Some cheap ballast use capacitors rated for 2000 hours.

Everyone is telling me to go LED and I have no experience with them. I don’t know which products to switch to for an equivalent or better lighting situation and, most importantly, a more true color experience. These are 6500k which is a little bit too cool for my liking. I’m looking for true colors on the camera, not warm, not cool. **** the 95 CRI (color rendering index) and full spectrum nature of our LEDs will certainly improve your video work. 5000K is the most neutral, matching summertime sunlight at noon on a clear blue cloudless sky.

I just realized this email is probably a lot longer than it needs to be. Sorry for that ;) ***I hope my responses are not too long for your liking. You seem to be quite technical and interested in these things, so I am providing more info than most people need or want. ????

Because LED lights are directional the strategy for lighting was a little different. With the fluorescent fixtures I didn’t have any hoods or anything to direct the light down. My thought was the more light the better and just let it bounce down off the white ceiling however it can. On the other hand, the LED’s are a directional light source meaning they shine light in one direction. This can be a pro or a con depending on what you are trying to light but for my situation where I’m just trying to light my work stations it’s a non issue for me.

How Bright Are They?

The fluorescent setup has 24 bulbs rated at 32w each for a total of 768w of lighting. The LED setup has four 24w panels and ten 48w panels for a total of 576w. On paper you would think that the fluorescent lights are brighter because they use more power but that’s not the case. The lesser powered LED lights produce a much brighter work environment, as you will soon see.

To measure how bright the lights are I used an app on my phone called Light Meter (Android). It does have settings for calibration but I didn’t change anything because I’m not looking for precise absolute values. Instead I’m looking for relative values to compare the two light setups. The app uses the proximity sensor and provides a Lux value (Lux is used to measure the amount of light output in a given area – one lux is equal to one lumen per square meter. It enables us to measure the total “amount” of visible light present and the intensity of the illumination on a surface.) For an example, I’m writing this article at night in my office with the only light sources being a 23w CFL bulb and the light from my monitor and no matter which direction I point the meter the highest reading I get is 81 lx.

In the shop I have multiple work stations so I want to take multiple readings and see how well lit each area is. For each light source I’ll place the phone in the same location and orientation and try to lean away so that I do not cast a shadow on the phone. I took readings with the LED lights, with the fluorescent lights immediately after turning them on, and with fluorescent lights after allowing them some time to warm up. Here are the results measured in lux (higher is better). 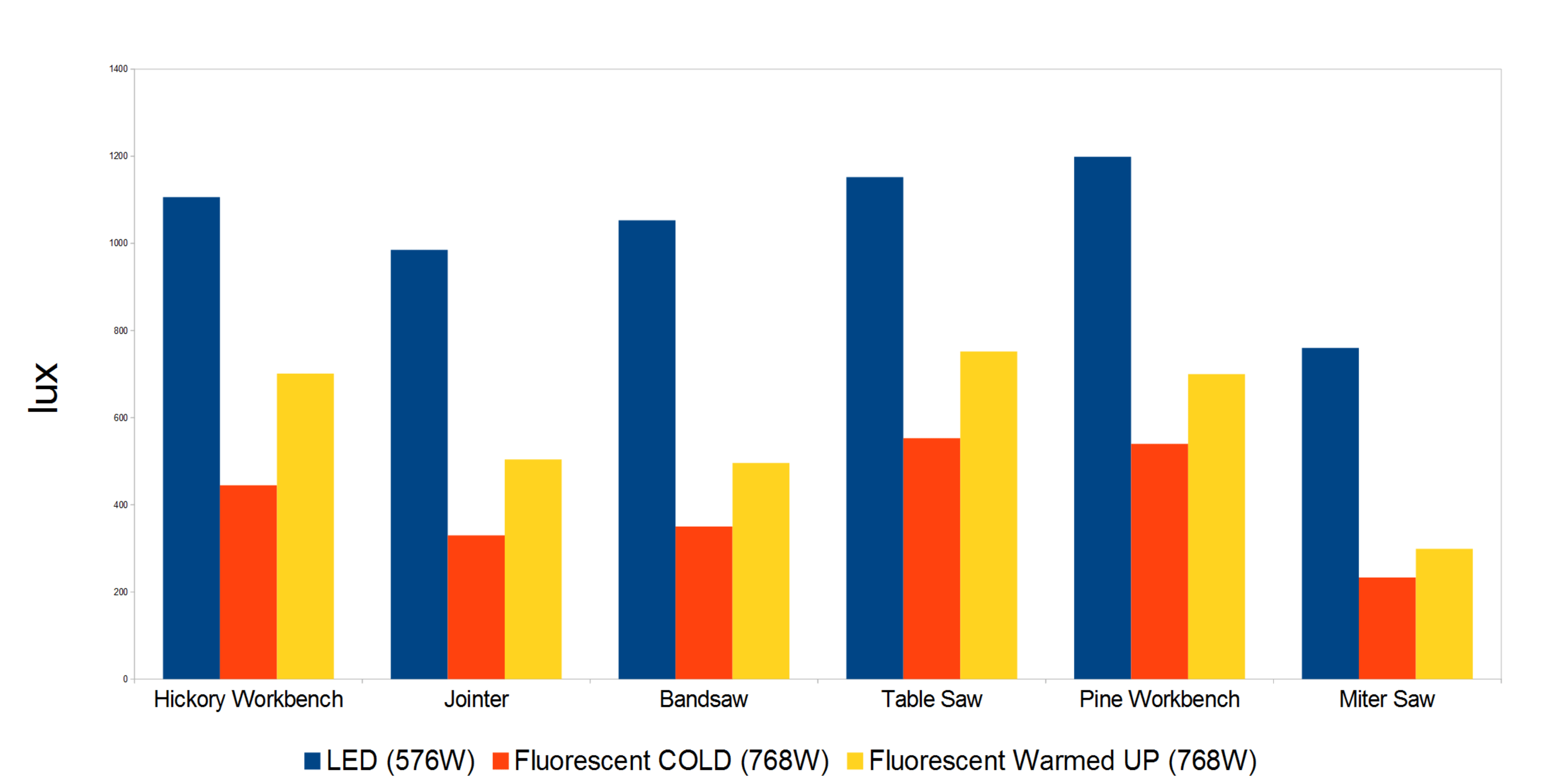 So how’s the color quality of the LED’s compared to the fluorescent setup? I purposefully left the fluorescent fixtures hooked up on their own circuit so I could flip between them and the LED’s to really see the difference and have good examples to show you. It’s a night and day difference. Such a huge improvement in accurate colors with the LED’s. What stands out the most to me is the reds, browns, and orange tones. When looking for lights remember that a higher CRI (color rendering index) will result in more lifelike and accurate colors. 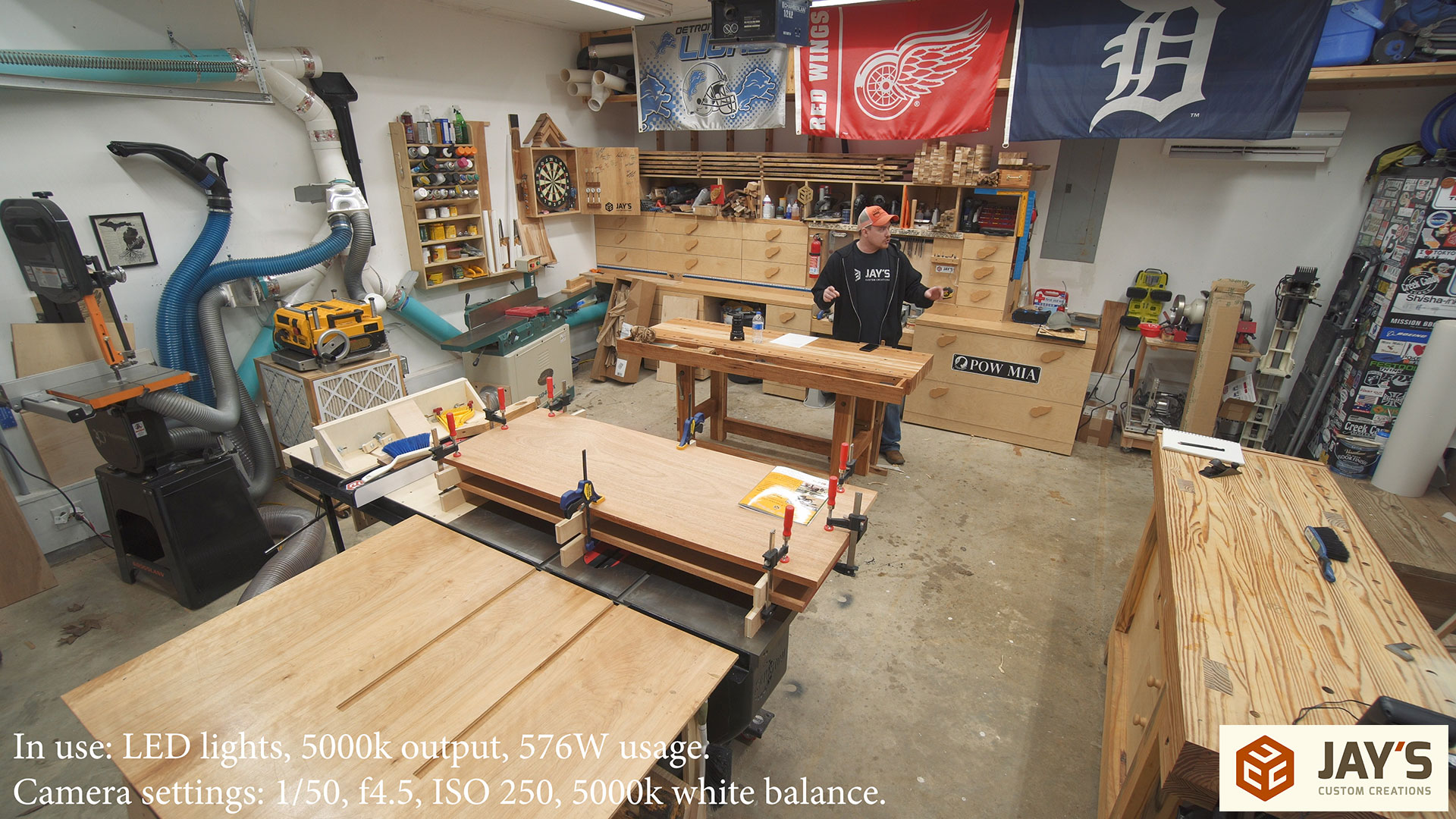 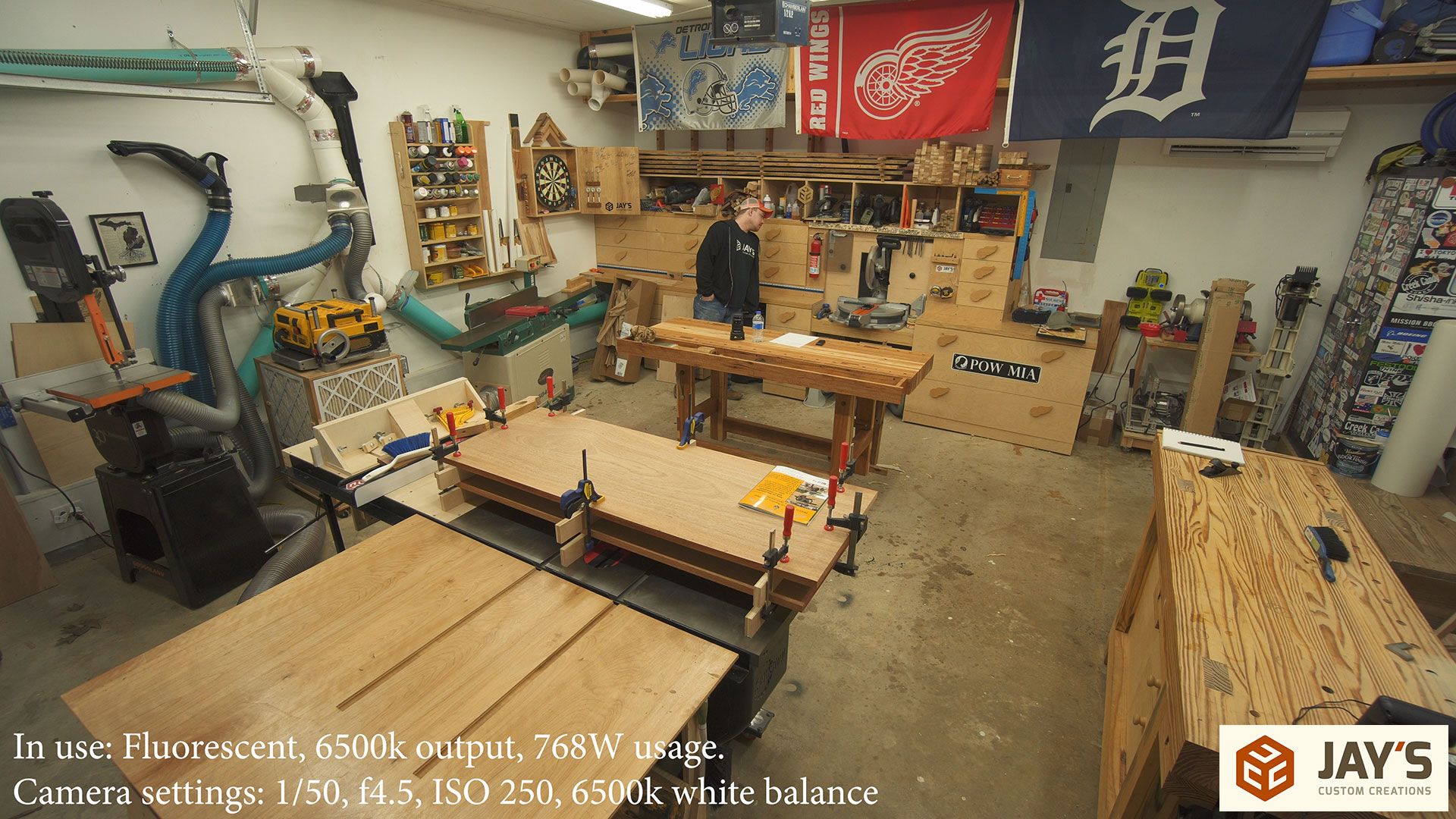 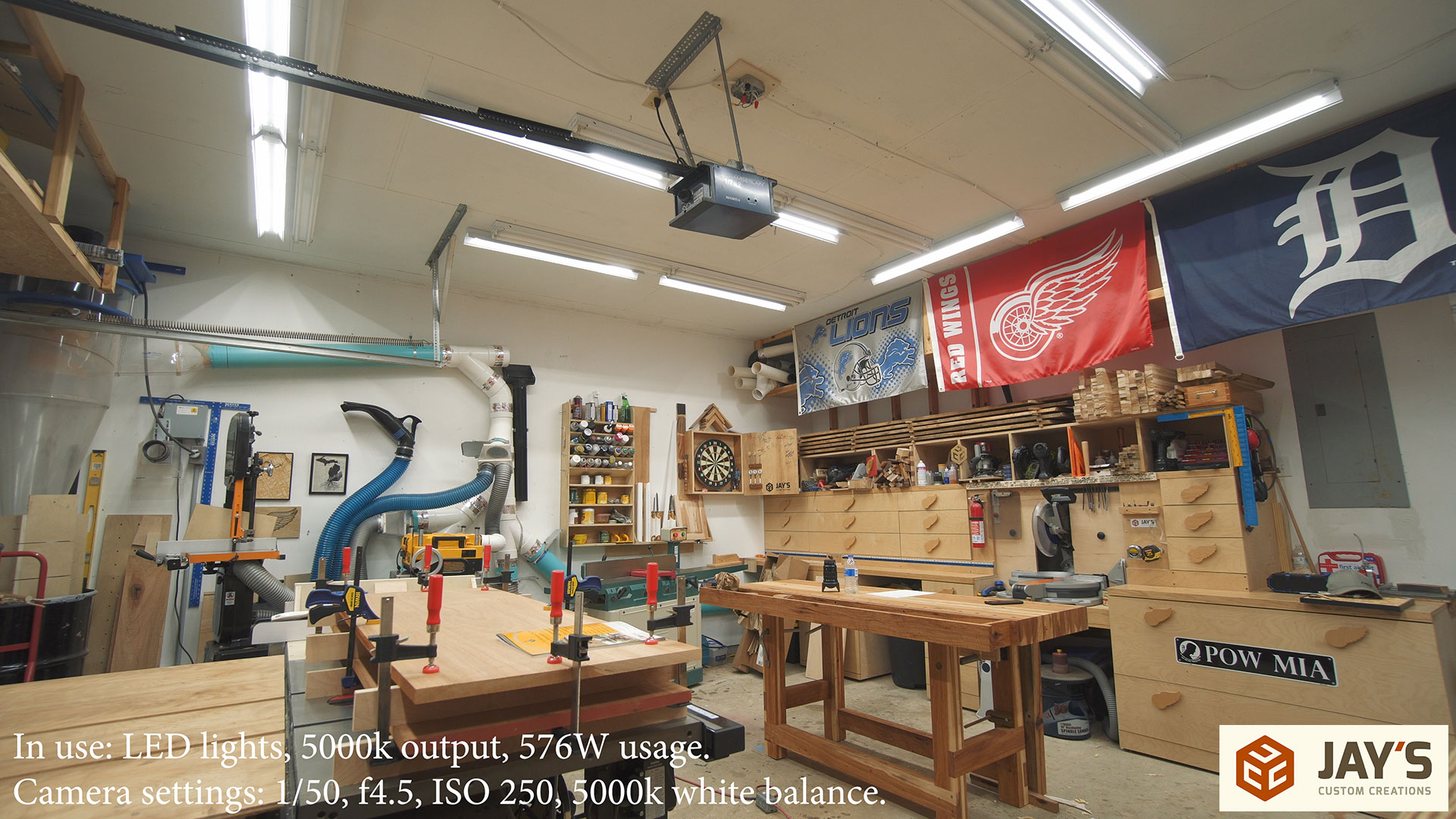 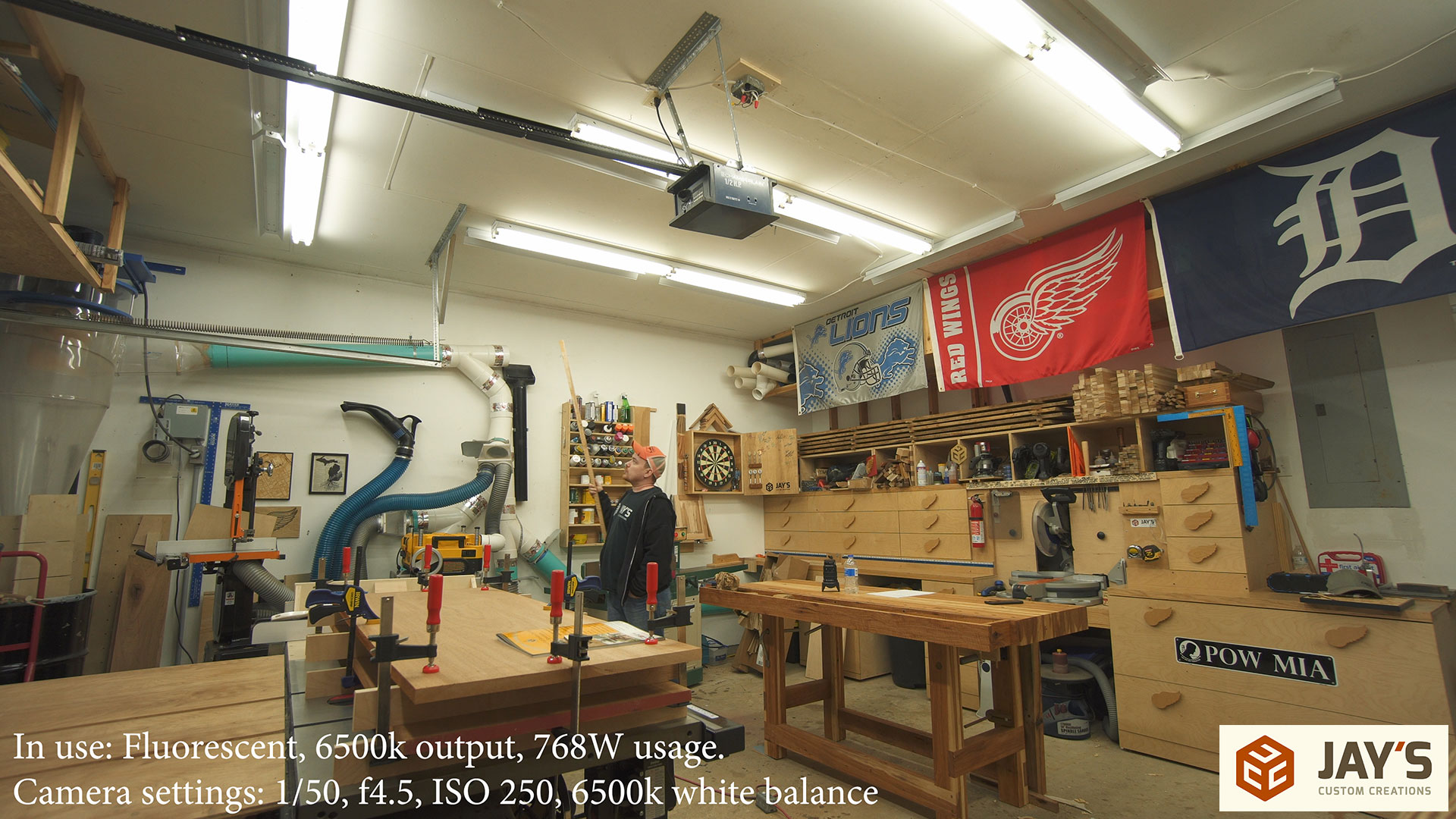