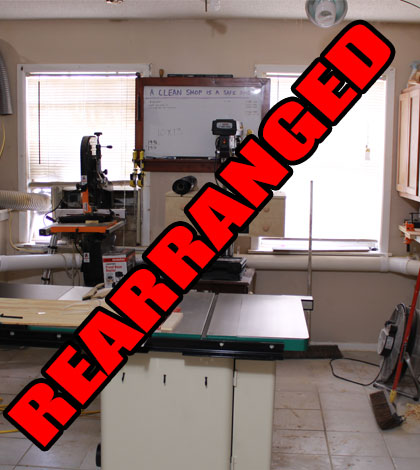 Some may recall a few months ago I sold my huge table saw station to downsize the footprint and make moving the camera and lights a little more manageable. A few bad table saw purchases later, I currently have much more table saw than I will ever need in the G0690 from Grizzly. I’m tired of sounding like a tool commercial so I’m not going to go into any specifics on that saw. With that said the much smaller footprint of the new saw makes moving stands and cords much easier in the shop. I went into the shop last Saturday to knock out a few of John Heisz’s shop compasses and that little thing called the “continuous improvement bug” kicked in so I rearranged the shop instead.

I’ve had my table saw in this spot for a while now and while the position works OK there are a few areas of improvement. Most importantly, because the vast majority of my projects are for YouTube, its not in a good location in relation to my lights. The lights are slightly behind the saw which puts the front of me in a shadow when recording. Moving the main lights is out of the question due to running more wires and not having any other ideal mounting locations. And while it’s not dark by any means I would prefer to not have a shadow on my work piece while I’m using the table saw. 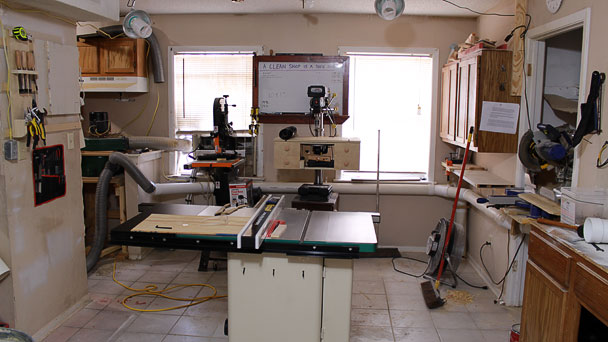 So the plan is to move the table saw to the other side of the shop so that all of my main shop light and the main natural window light will be shining on the front of me and my project while I’m working. Traditionally I use this area with my saw horses to break down larger sheet goods but with the new table saw I’d like to get the most use out of it that I can and start using it to break down sheet goods. 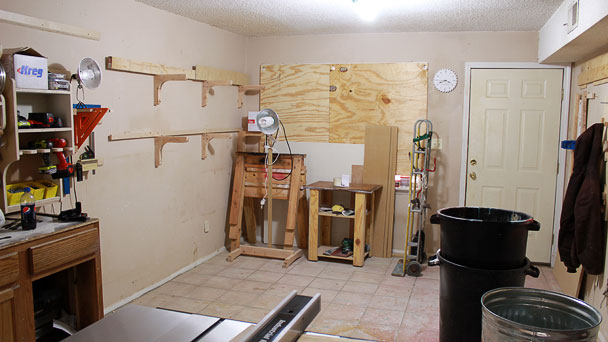 Because the table saw will be on the other side of the shop I needed to move the dust collector. I’ve been wanting to do this forever too. It’s going to go in the corner where the floor sweep is. This will eliminate a lot of PVC. 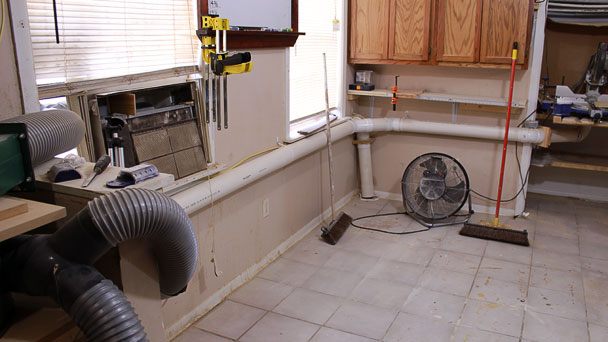 I removed all the PVC and piled it up. It looks like a lot more when it’s all together like this. 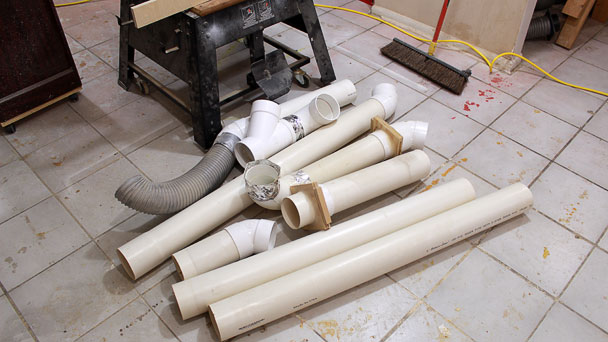 Here’s the dust collector stand in its new home. I can already see a problem with those cabinets being non accessible. 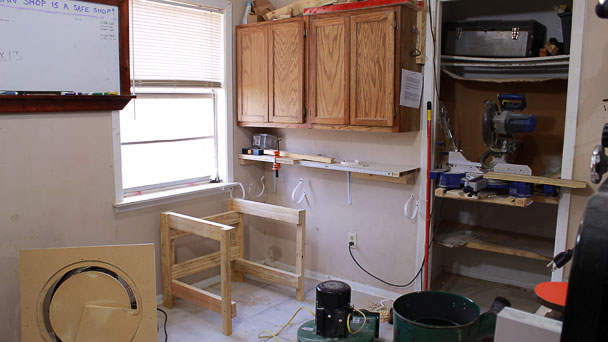 So I took them down. I have a great idea to reuse them again in the shop but that will be for another article. Stay tuned! 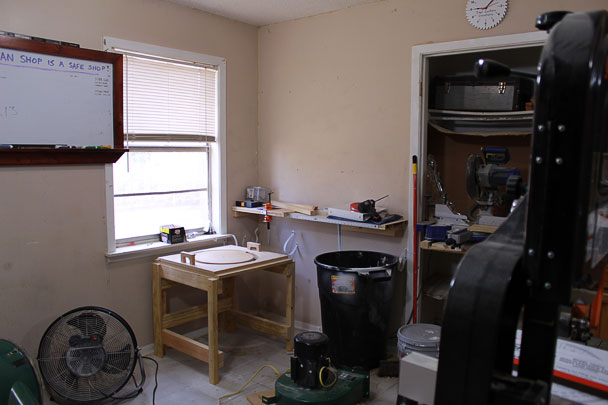 For those who missed my dust collector build article here’s how it goes together. Everything is just gravity fit. No tape, silicone, or weatherstripping for sealing. Here’s the Thien baffle that will sit on a trash can once assembled. 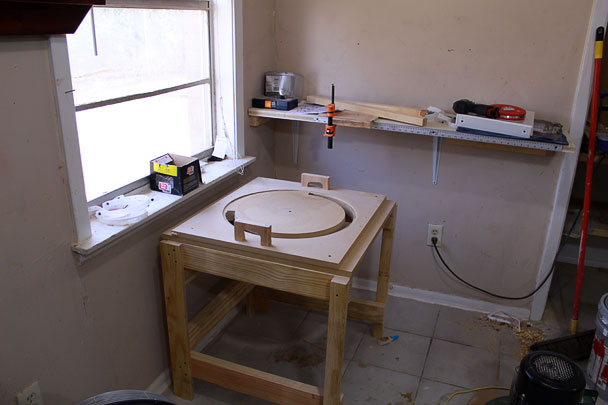 And the stock ring that comes with the 2hp (not 2hp) Harbor Freight dust collector. 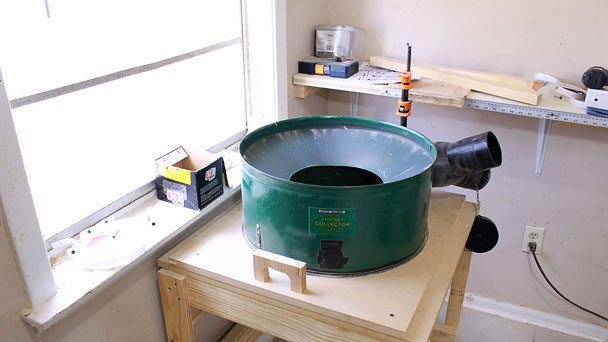 Followed by a plate that fits on top of the ring and another spacer plate to act as the motor platform. 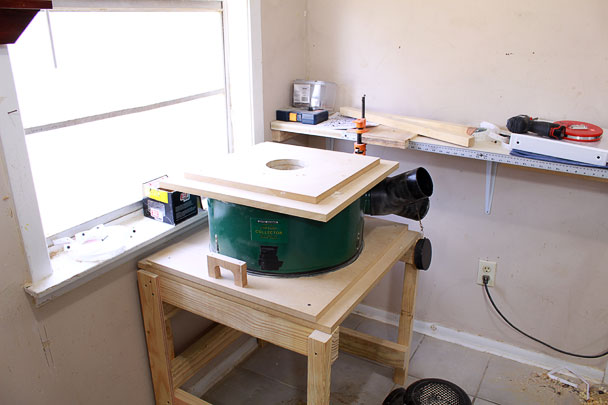 And lastly the motor with the exhaust facing outside. 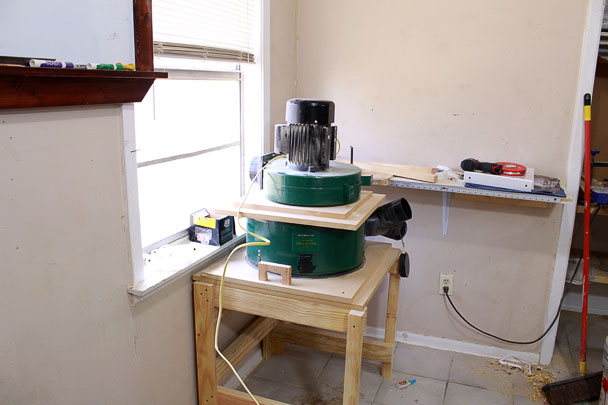 With the dust collector in place I had a lot of work to do. The first was electrical. Previously I had two manual switches to turn it on. Good idea at first but cumbersome at times. I picked up a $10 15amp remote receptacle switch from the box store and so far it’s AWESOME. I’ve heard a lot of good and bad on using this setup. The bad only being that the remote receptacle will die early. My “20 amp” dust collector only pulls 12 amps so this should last a long time (I hope). Secondly, I cut and fit a piece of plywood to run the exhaust hose out the back window. The panel fits in the grooves of the window tightly and I taped the outside with weatherproof (kinda) tape. And lastly, I ran the little bit of PVC that I had to with this setup. The cool thing is I didn’t have to cut any of it. One blast gate and a flexible hose under the miter saw and one blast gate and a flexible hose going to the table saw. 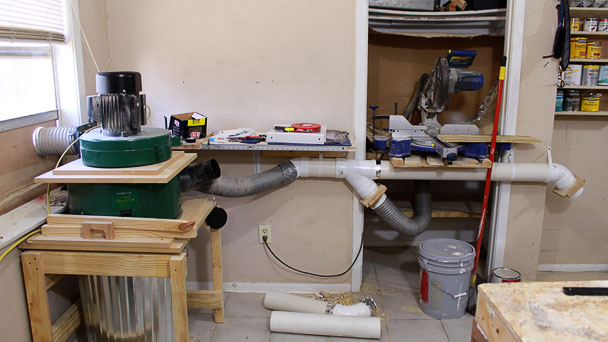 My bandsaw and drill press would cover up the dry erase board so I moved it where the cabinets were. And I put the drill press and bandsaw where they normally go. With those dark, shadow casting cabinets off of the wall the whole side of the shop looks soooo much brighter. And because I don’t have the PVC on the back wall anymore I’m able to move my tools about 4” closer to the wall making more room in the center. Every little bit counts. Look at how much left over PVC I had on the floor! 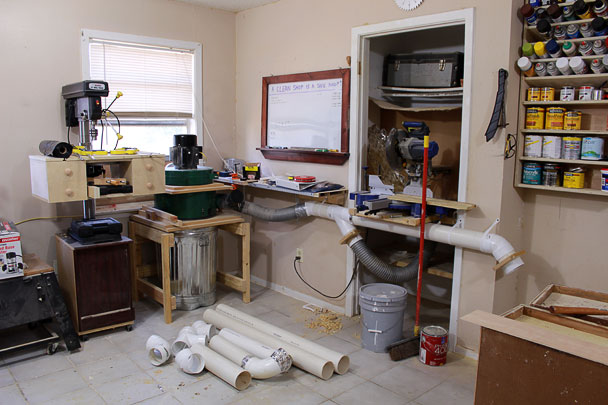 Again, it looks so much brighter on that side of the shop. I removed the window AC unit so I could still use my fan for exhausting air. While the bandsaw is on a mobile base I have a flexible hose that can reach from it to the other side of the dust collectors main Y connection without it moving. 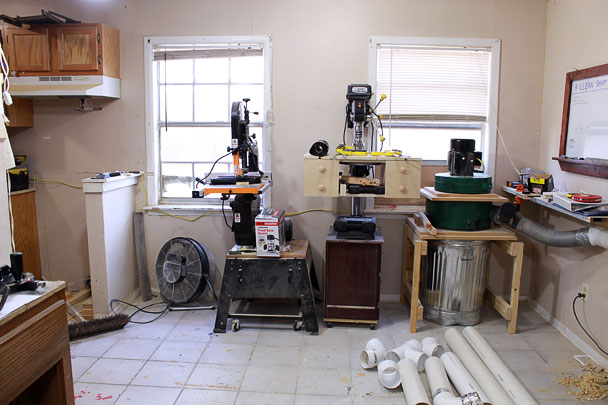 I really like this setup….a LOT. Now all of my tools are near the perimeter giving me a lot of access in the middle for the camera and lights and also the shop feels so much bigger now. 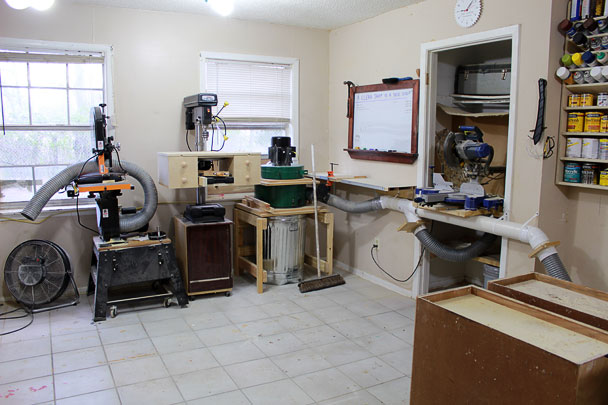 And here’s the view facing the other direction. I could no longer use the big sink base cabinet I was using for a material support on the miter saw as it’s in the way of the dust collection hose. I can just throw together two brackets and put them below the french cleat setup to make up for this. I also used to use it for a table saw outfeed table but it’s too tall for the new table saw. Until I need the space I’m just parking it in the back corner. I have a nifty idea to use those two wall cabinets as an outfeed table so stay tuned for that! 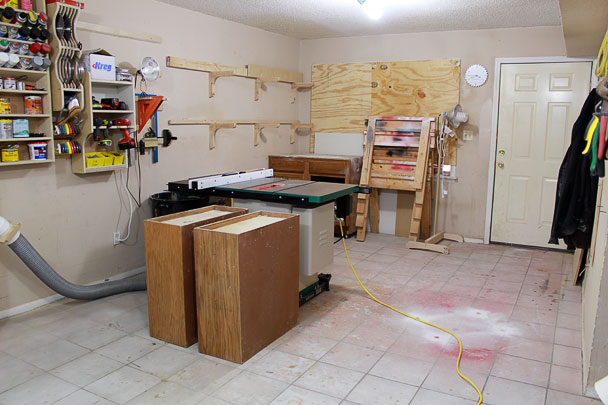 This layout works so well for me because everything is on the relative perimeter of the shop. When my old table saw station was in the middle of the floor it had to be positioned so that there was access to both the left and right side due to the router wing. Doing so required it to take up twice as much room as necessary. Having the saw on the side of the shop turns two smaller walkways into one larger walkway. 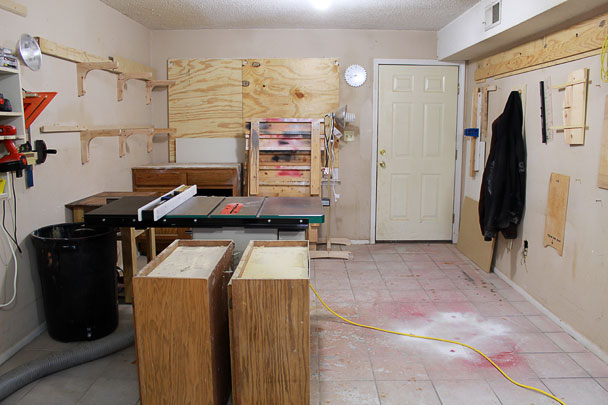 And a view from behind the saw. 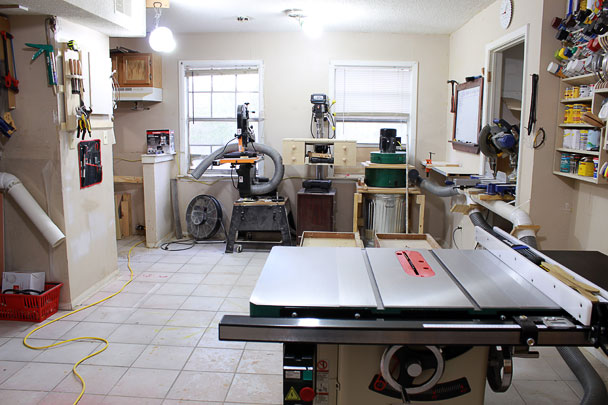 The area behind the saw will allow me to rip a full sheet of plywood. 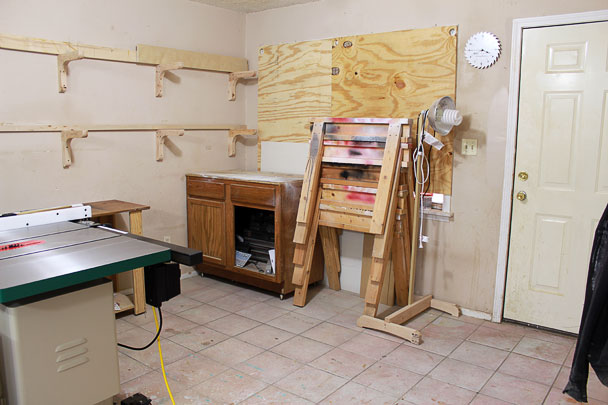 And one last shot showing the work side of the table saw. 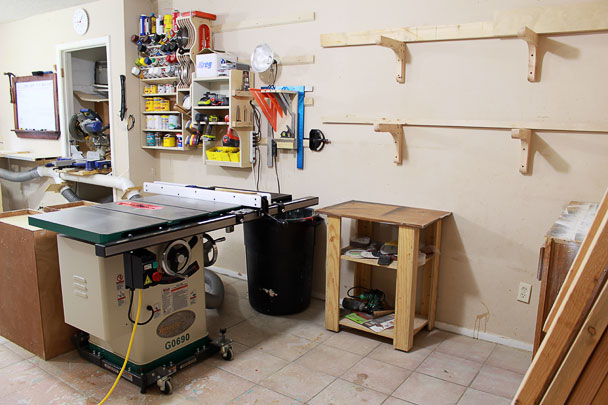 In the end I’m so happy I changed things around. It’s the first time I feel like I’m in a woodshop and not an apartment when I walk in. Hopefully this works out to be a more efficient place to work.