A few years ago I made a sliding moxon vise out of two 1/2” pipe clamps and some scrap plywood in the shop. As a vise, it worked very well. Both jaws were made from laminating plywood together and it was secured to the work table via two homemade hand screws from scrap wood and a carriage bolt. The hand screws connected to two tee nuts mounted in holes on the bottom side of the table. I used this setup for a while until it gradually became more and more inconvenient to setup.

The problem with my previous moxon vise was that it was mostly in the way when mounted to the top of the work table and when it wasn’t mounted it wasn’t convenient to use. I tried mounting it to different work surfaces but in the end it just barely saw any use from me. I gave it away to someone who stopped by to check out the shop.

My need for a vise hasn’t gone away though. That’s something that will never go away in a woodworking shop. Having multiple options for holding work pieces is very beneficial. So with a proven concept of using pipe clamps as vises I decided to make another version for my current work table. This time I wanted it to be built into the end of the table to be more convenient to use and not in the way of the work surface. If it’s not convenient odds are it won’t be used. Again, I used scrap plywood I had in the shop for this. 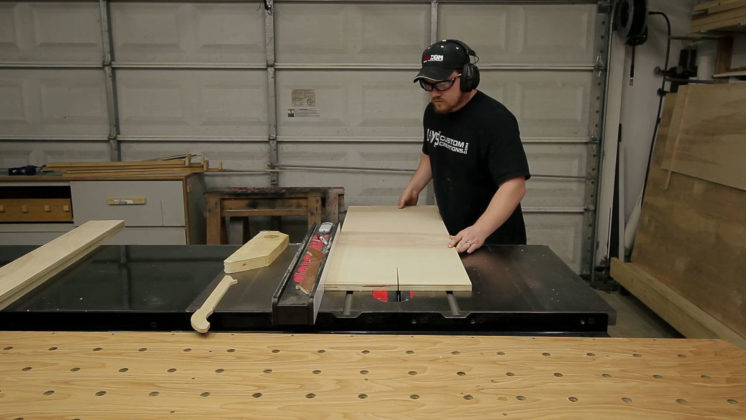 All of this scrap plywood is Purebond hardwood plywood. I’m sure using pine plywood would be sufficient but I like the rigidity of this hardwood stuff. It’s also made in the USA and formaldehyde free which are two great bonuses. With my material ripped to width I cut the pieces to a little longer than necessary at my miter saw station. I say it all the time but I absolutely love my miter saw station setup. Having a dedicated setup like this is incredibly convenient and really is a pleasure to use. 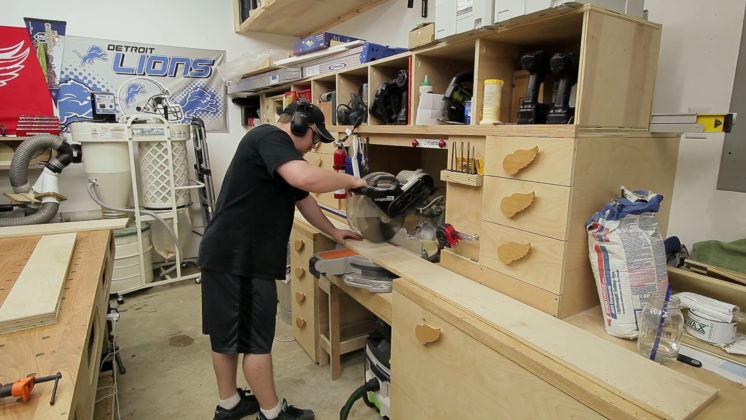 The front movable jaw will be a lamination of four strips of 3/4” plywood. This will give a 3” thick jaw. Plenty strong enough for this application. 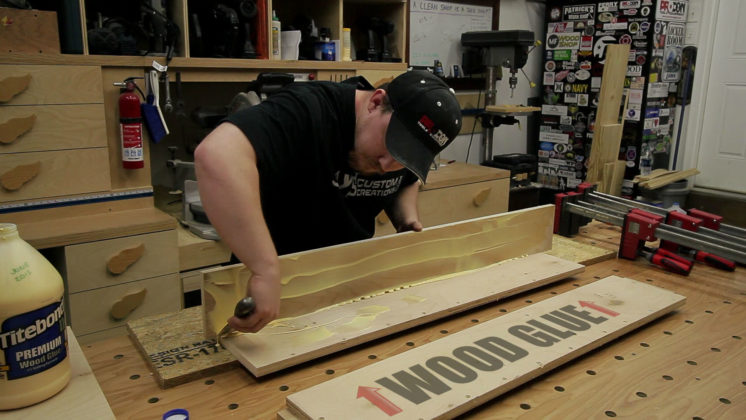 Glue-ups can sometimes be stressful. Especially when you have larger items or a lot of items to glue. To ease the stress a bit I used biscuits. 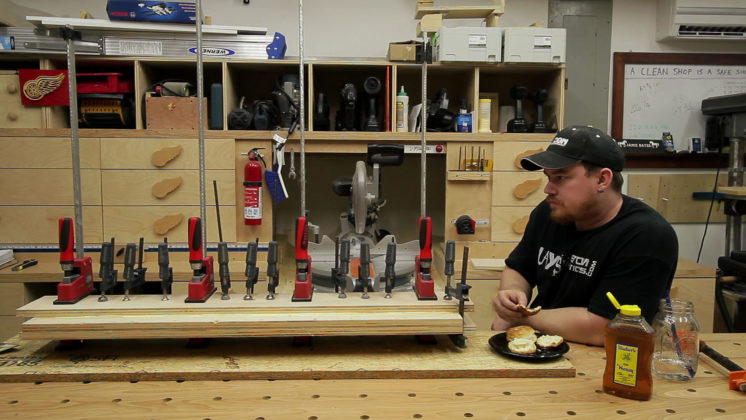 While the front jaw glue-up cured I worked on machining the blocking that would make up the interior structure of the vise. Six blocks 4” x 7” were cut from 2x dimensional lumber. These were actually scrap 2×10 pieces from my chest of drawers build. 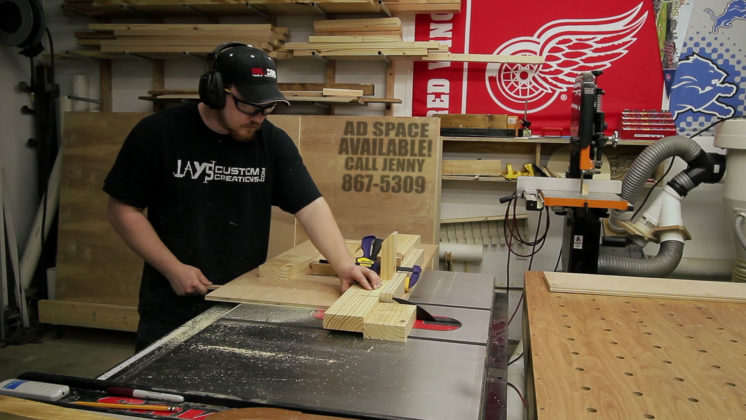 The interior cavity height of my Paulk work table is 7” and I want to use blocks that are that exact length inside the table. Because the pieces will need to be rotated into place you have to consider the longest diagonal length when rotating. It will always be longer than the piece is so to reduce the diagonal length while still maintaining a 7” total height I added a rough chamfer to the bottom edge of each of the interior blocks on my bandsaw. I explain this better in the video for this vise. 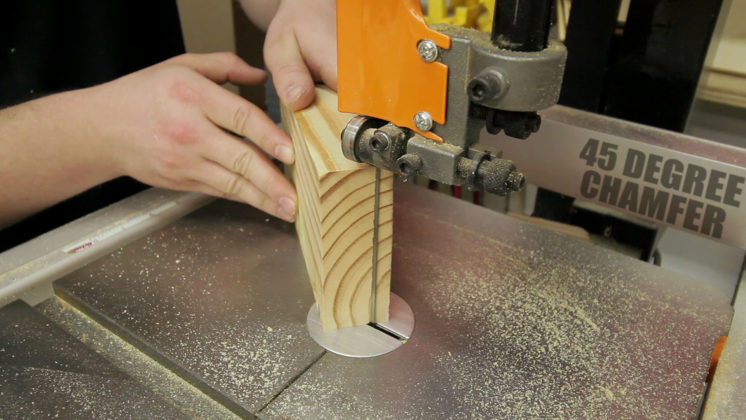 The location of pipe hole needs to be the same in each of the interior blocks so the pipe will track correctly. To do this I clamped a few blocks to my drill press. A standard 1/2” pipe needs a 7/8” diameter hole. 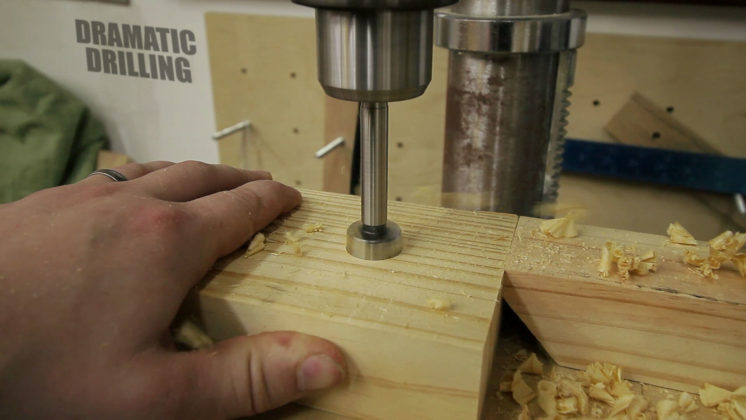 With all of the interior blocks ready I stood them up one at a time in the work table. Using the pipe to align them I first stacked two front to back and secured them to one another with two 2-1/2” screws. Then I removed the pipe, slid the third block in front of the other two, used the pipe again to line them up, and secured the third block to the first two with two more 2-1/2” screws. I did this on both sides of the table where the pipes would be. 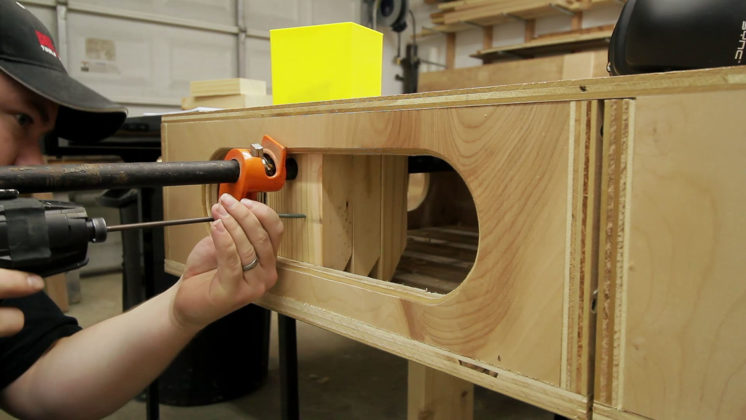 Once both interior assemblies were complete I positioned them left and right and secured them to the table itself with a few 1-1/4” screws. 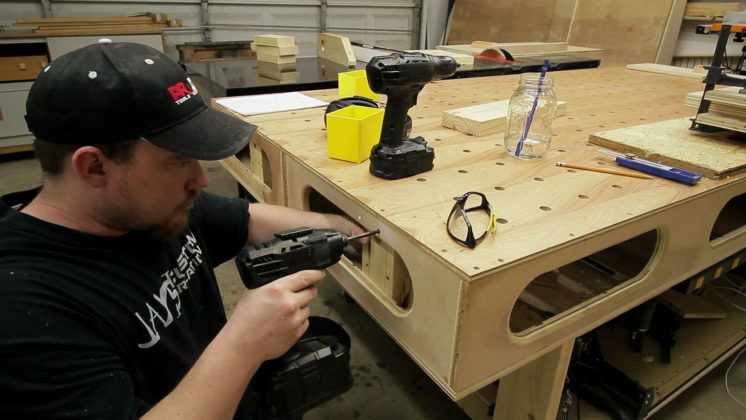 Once the vise is complete I don’t want the rear pipe clamp pieces to move so I drilled a couple holes to secure them with screws. These will be used in the last step. 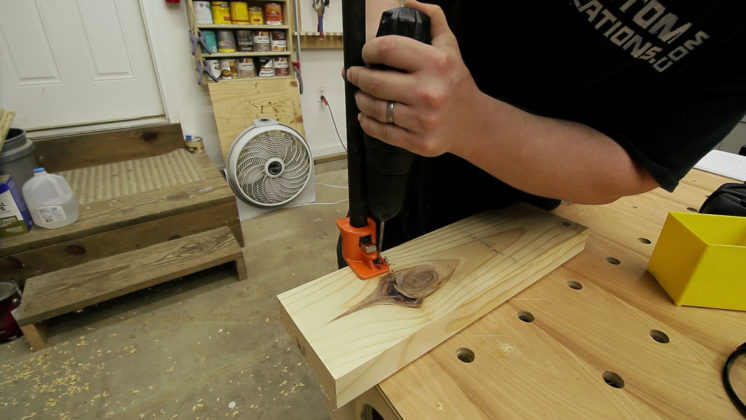 With the front jaw out of the clamps I ripped it to it’s final width at the table saw making sure to take material off both sides. I get questions quite often about how much power is necessary in a table saw. This saw has a 3hp motor and it sliced through this 3” thick hardwood ply (poplar) glue up with no problems or bogging down. 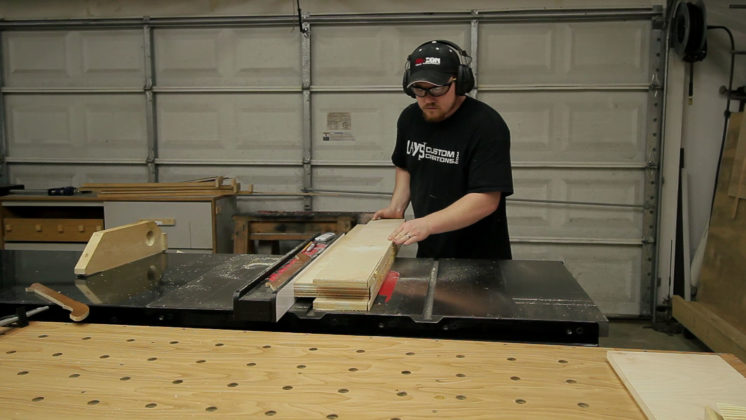 And again I used my miter saw station to cut it to it’s final 36” length. I also added a chamfer on both outside corners of the front jaw. Just to prevent bumping into sharp corners. 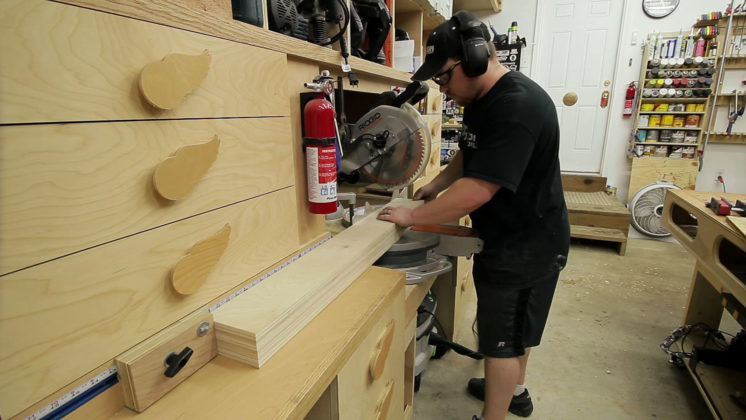 The front jaw does not receive regular 7/8” through holes. Because this vise jaw is rather wide it needs some extra horizontal play where the pipes pass through. Not allowing this space will cause the jaw to bind up as it moves in and out. Extra play is only wanted in the horizontal direction though. Not the vertical direction. The more play in the vertical direction you have the more likely the bottom of the jaw will rack forward when clamping something only in the top inch or so of the vise. I laid out my cutting area on both sides of the jaw before I started cutting to reduce the chances of me making a mistake while cutting. 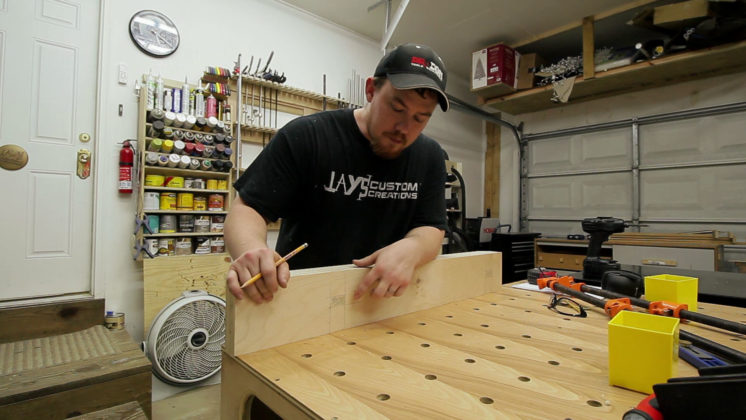 I used my plunge router and an edge guide for this. I just got a dust collection attachment for my Bosch router and it works great. Having great dust collection on a router is very nice and will probably increase my temptation to use the router on projects. Essentially your just making a mortise here. When making a mortise though plunge down to drill a full depth hole in the start and stop locations of the mortise. Then use shallow passes to remove the material between the holes. The start and stop holes will prevent you from going too far with your mortise. Just a quick tip I picked up from The Wood Whisperer :) 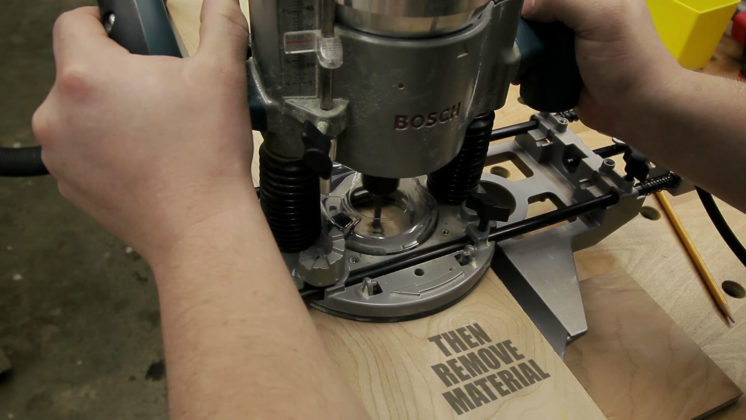 Because my router bit was kinda short I could only plunge about half way through the material. That’s why marking both sides of the jaw is important. Flip it over and repeat the process. 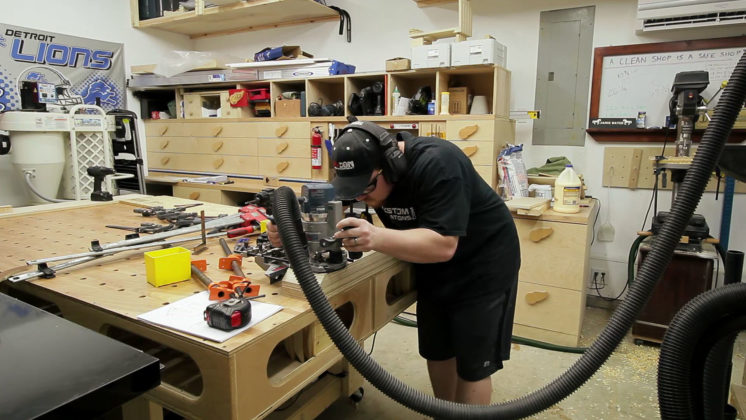 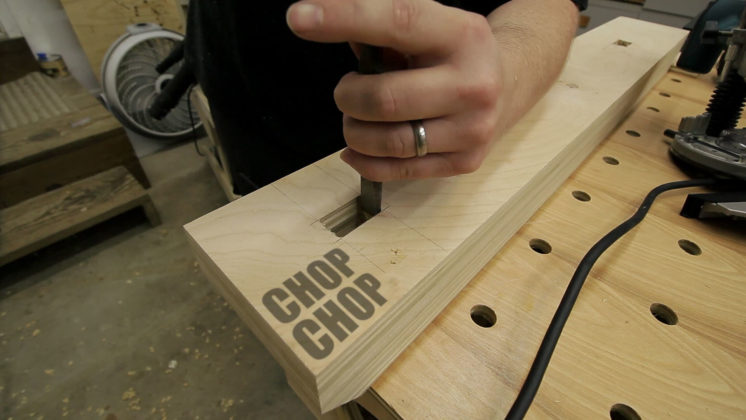 After cutting the stationary rear jaw to length and drilling a couple oversized holes it can be attached to the work table. Use the pipes to position it before securing it. Myself and I made quick work of this. It was only a few screws so anyone can make quick work of it actually. 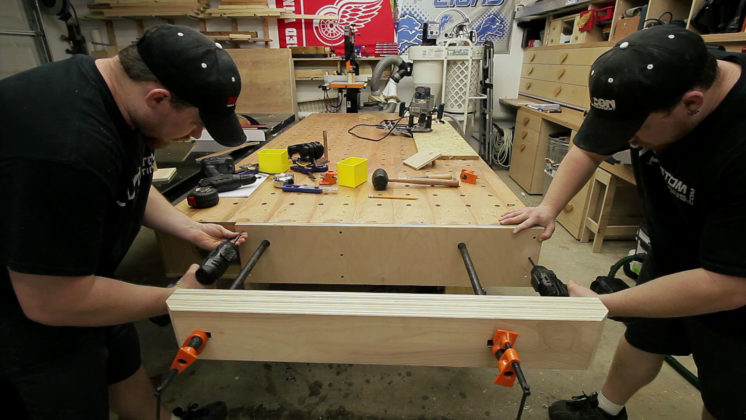 Finally the last step is to secure the rear pipe clamp jaws. This step was a little fiddly. It turns out that I had better luck sliding the pipe in and out once assembled when I kept these hold down screws slightly lose. That way the rear pipe jaw could wiggle slightly as needed and reduce the chances of the pipe binding in the solid wood next to it. This work table has openings on both sides which makes reaching into the interior space to adjust the pipes very easy. 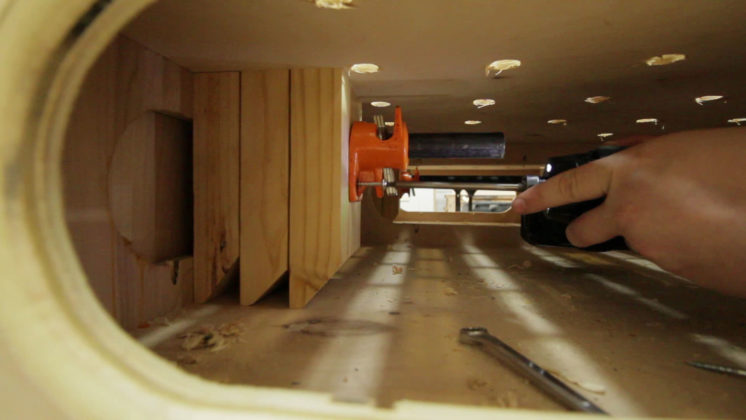 The completed vise will have as much clamping depth as you want according to how long of pipes you use. 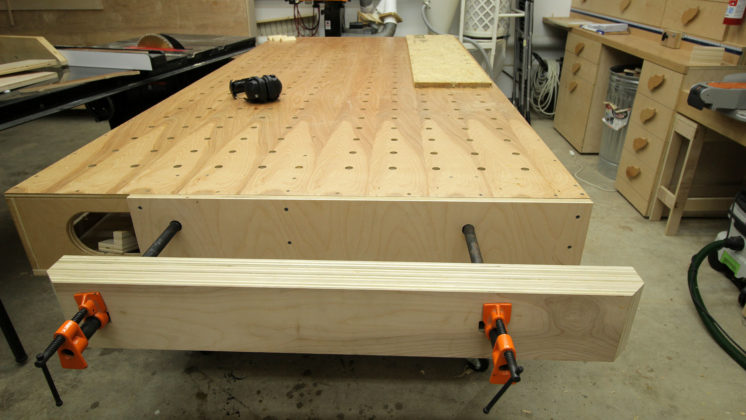 The space between pipes is about 24” or so and can be modified as needed. I also offset the right pipe a little bit to give more clamping area to the right for pieces that can’t be clamped along their entire length. I hope you are able to find this project as useful as I am. For those who are interested click here to download a zip file containing dimensioned diagrams in a PDF and a SketchUp file of the vise components. Have a great one folks! 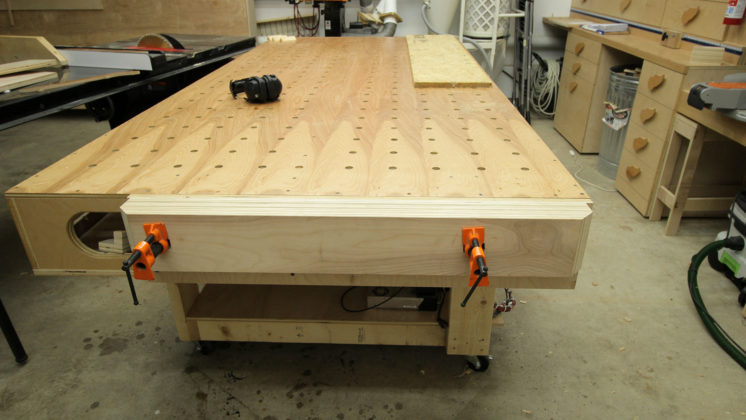 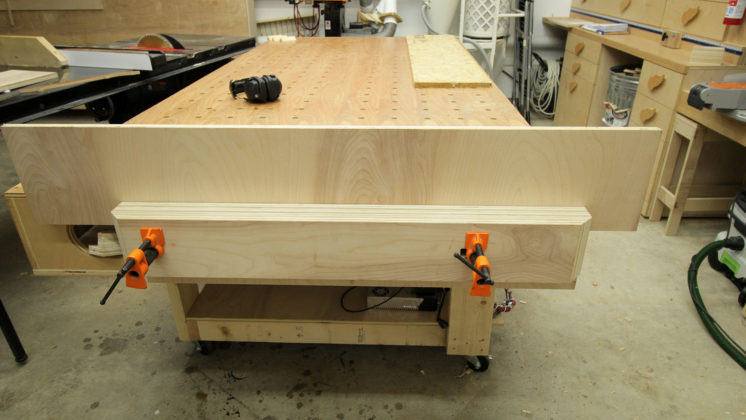 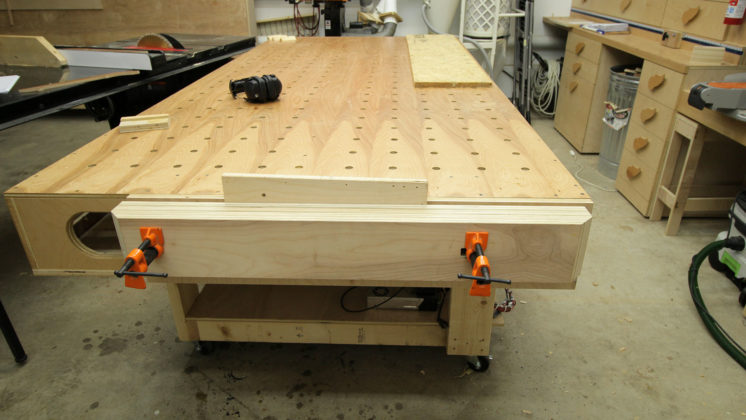 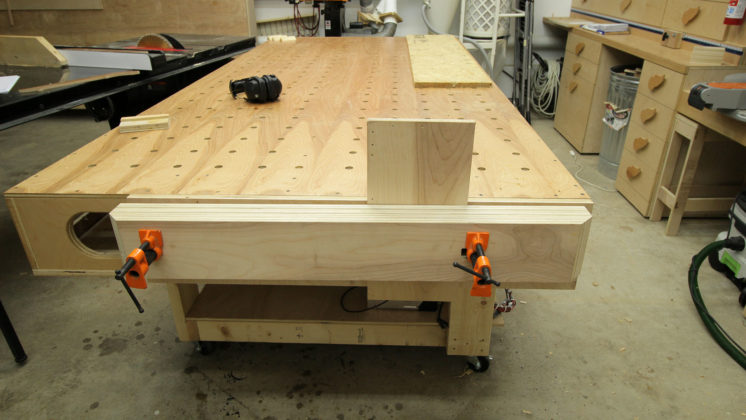 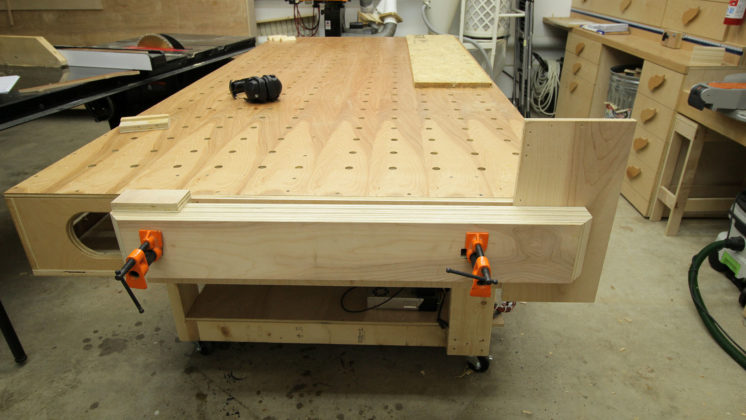