This is the third table saw box joint jig I’ve made. The first one was for a dado blade and was something simple and temporary. I don’t recall what I did with it or where it ended up. The second one was specific to my last table saw and when I gave that saw away all of the jigs specific to it went with it. For the third version I decided to build John Heisz’s ibuildit.ca ultimate box joint jig. I really liked John’s original version of this jig but never got around to making it. It wasn’t until he released the new and improved version that I put forth the plan to make another box joint jig.

There are several options out there for box joint jig designs but I chose this one based upon the simplicity of the design and the fact that the completed joints are restricted to multiples of 1/8”. I really like the restriction to 1/8” here as it allows me to use my standard, full kerf table saw blade for every setup. I don’t see the need to get over complicated with any other spacing. 1/8”, 1/4”, and 3/8” are probably all I’ll ever need to cut and if by chance I need to go wider I’ll have options as well.

I purchased the plans back in August when John published them but wasn’t able to get to building the jig until recently. What held me up the longest was finding the 1” threaded rod locally. I live in a relatively small city that doesn’t have a great hardware/woodworking selection. On top of that, after finally getting the threaded rod I somehow misplaced it in my pretty well organized shop and had to delay another week.

The jig doesn’t require much plywood at all. I made the first cut slightly oversized on a large panel with a circular saw. This allows me to bring the much more manageable size piece to the table saw to trim it down to the appropriate dimensions. The plywood I’m using is Purebond hardwood plywood from the Home Depot. I’ve been using it since making my miter saw station and have had great results with it. Plus it’s formaldehyde free and made in the USA which are both great. 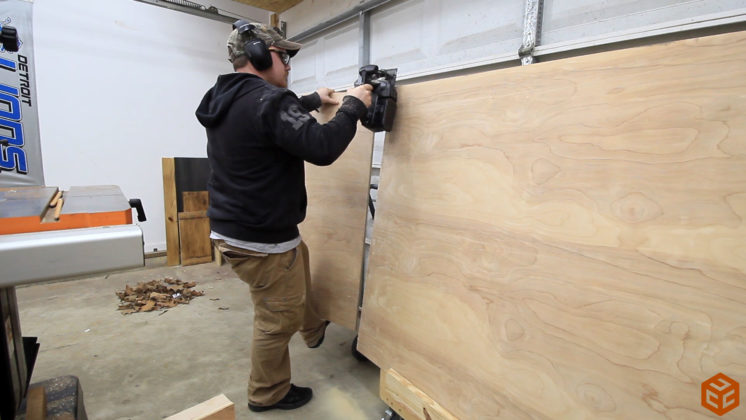 The plan is pretty well laid out to batch out all of the plywood pieces first. It’s pretty much a bunch of rectangles. Super easy. 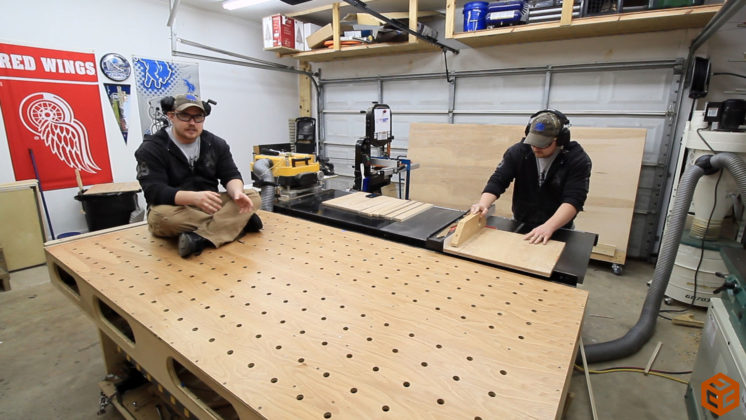 After all the ripping was done there were a few pieces that needed to be crosscut. I used my table saw sled for this as it’s easier to use as top block on this than on my miter saw station when small pieces are being cut. 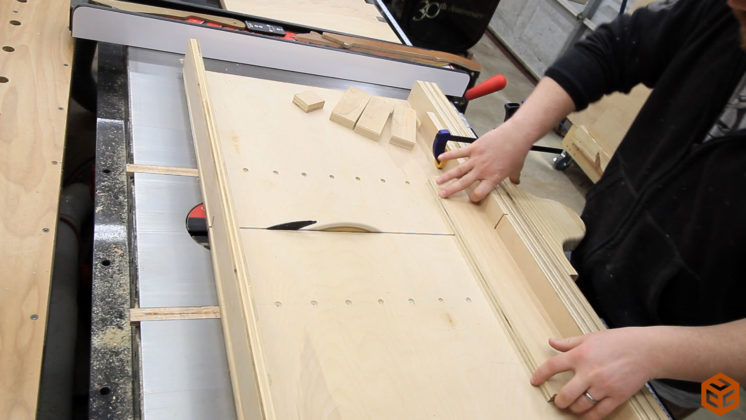 All of the screw holes are dimensioned out in the plans which makes the process much easier. And of course a drill press makes it pretty fast. 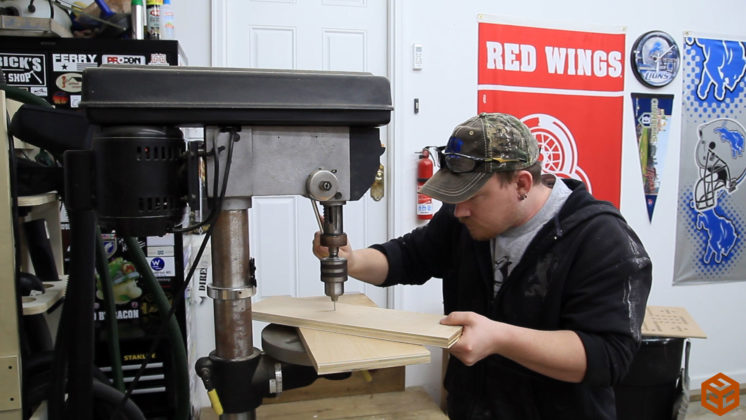 Two handles are incorporated in the design which is really nice. These handles keep your hands in a fixed location while operating the jig which reduces the chance of accidentally doing something stupid with your hands and causing an accident. To cut the handles larger holes are cut to establish the start and stop points for a jigsaw to remove the interior material. As I’m writing this article it dawned on me that I never rounded over the edges of the handles with a router. Oh well. I suppose if it was that big of a deal I would have realized it when I was using it after it was done. 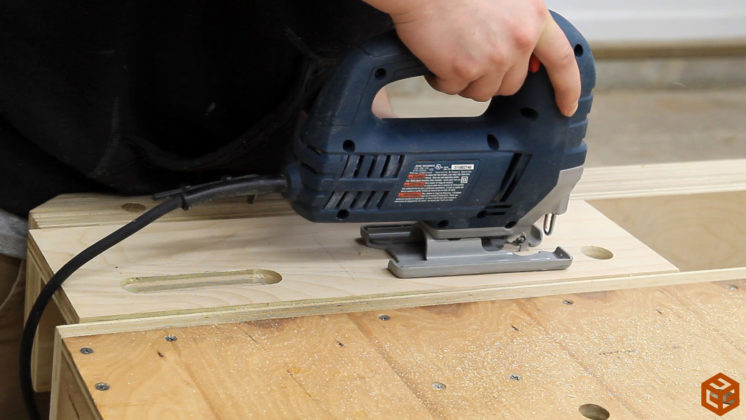 The indexing of this jig comes from a 1” threaded rod with 8 threads per inch. The plans call for construction adhesive or epoxy to glue it in place but I had neither on hand. I also didn’t want to wait overnight for the construction adhesive to fully cure if I were to use it anyway. So I decided to give hot glue a try. This isn’t an ideal solution. You have to work crazy fast and use a lot of glue. I ended up using a LOT of glue as fast as I could and it worked. I really wouldn’t recommend this method though. 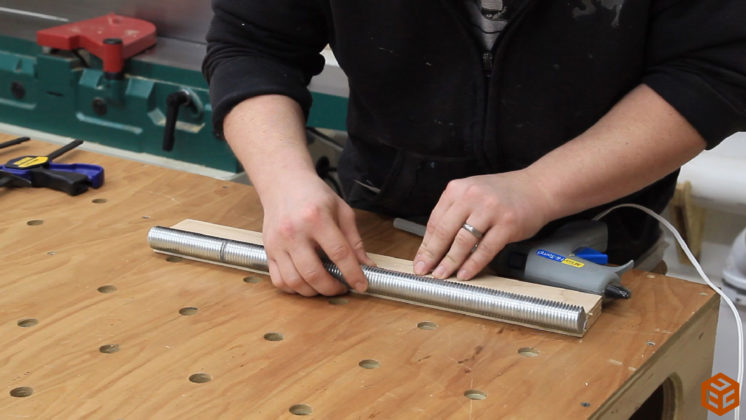 No brad nails are required in the plan. I used a few here and there though to hold certain pieces in place while I secured them with screws. 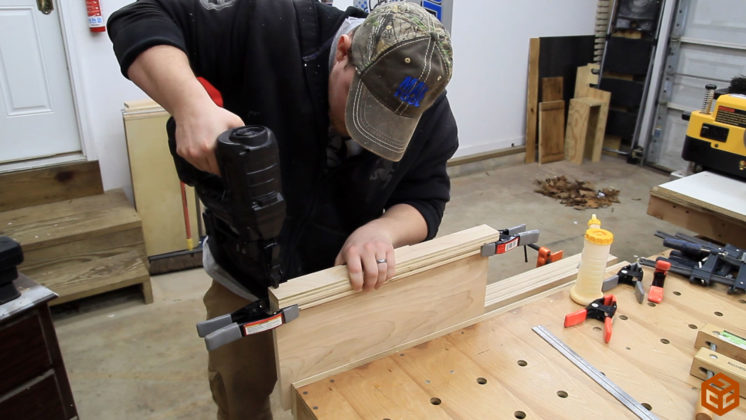 Assembly is pretty easy. Nothing complicated. Just butt joints, glue, and some screws. 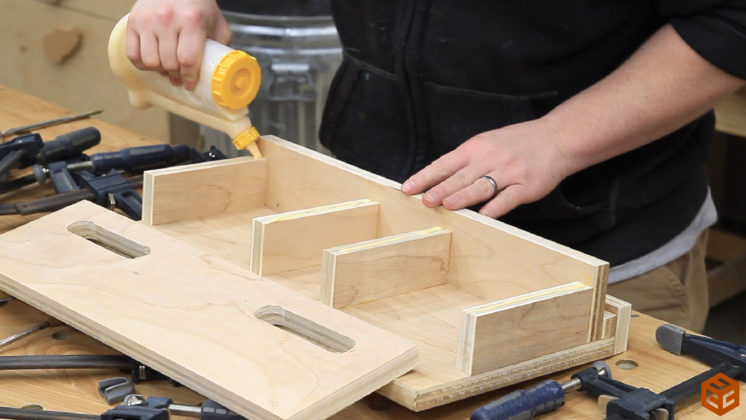 Some folded paper is needed to provide space for movement between a couple parts. 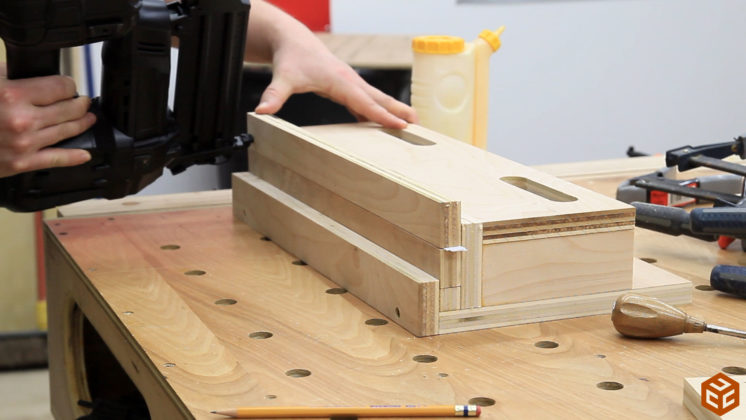 Before you know it the indexing assembly is ready to be built. Again, the benefit of using hot glue for securing the threaded rod is that I was able to get this whole jig built in a few hours. 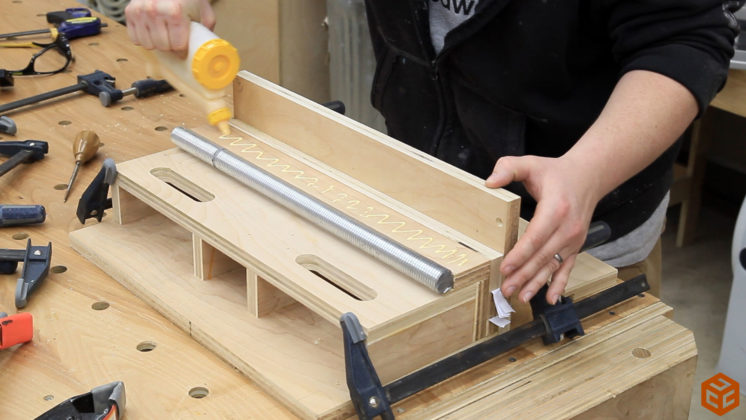 All of the holes drilled previously lined up exactly where they needed to be. I had to drill through the holes into the second material on all of these though. The only screws I had on hand were much longer than called for in the plan but I was just trying to use what I had on hand and prevent splitting of the plywood. 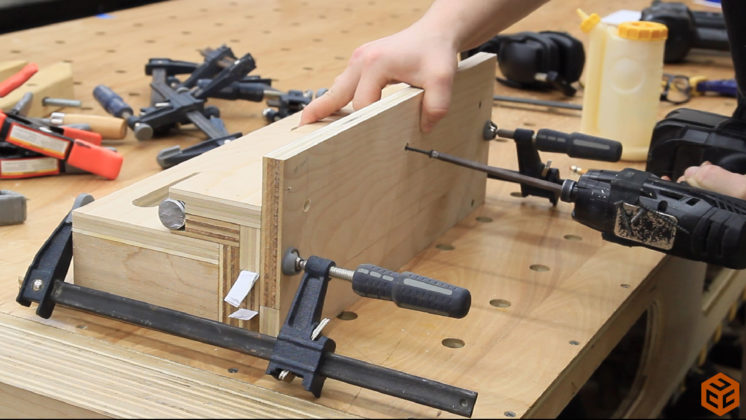 A vertical registration block is secured on the far right of the carriage. Just a bit of glue and two screws. 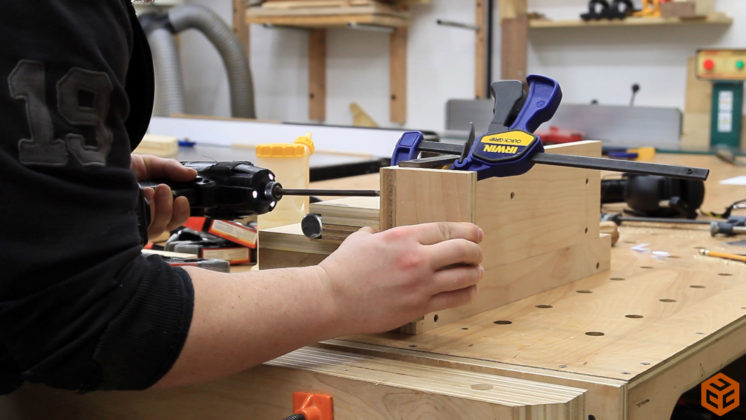 The jig isn’t entirely plywood though. There are a couple parts that need to be cut out of clear hardwood. I used a block of hard maple that I salvaged from the trash. The majority of the parts are the same width and height so laying them out and ripping a strip off one side makes for a bit of consistency. 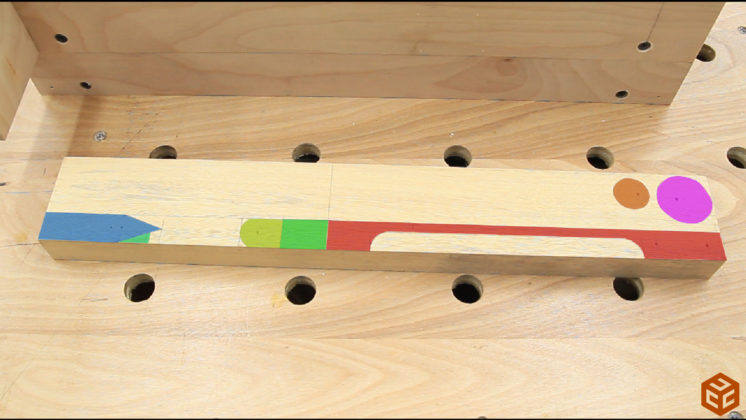 Holding small parts at a drill press is an easy way to get busted knuckles from the bit catching in the wood and spinning around into your hands. It’s much easier to drill all of the holes in the small parts before cutting them out. 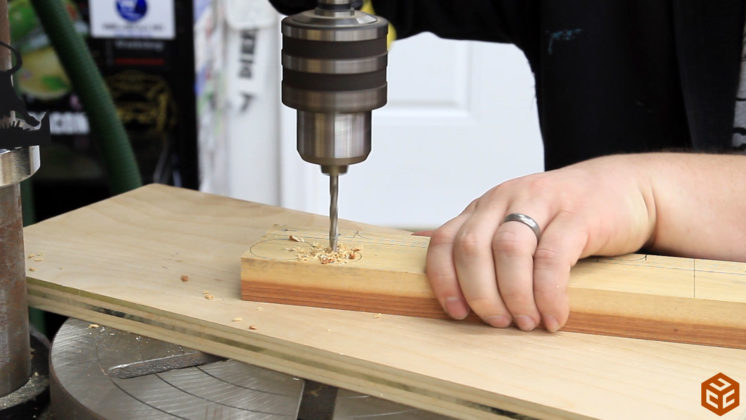 With all of the pieces drawn to scale cutting them out on the bandsaw is pretty easy. 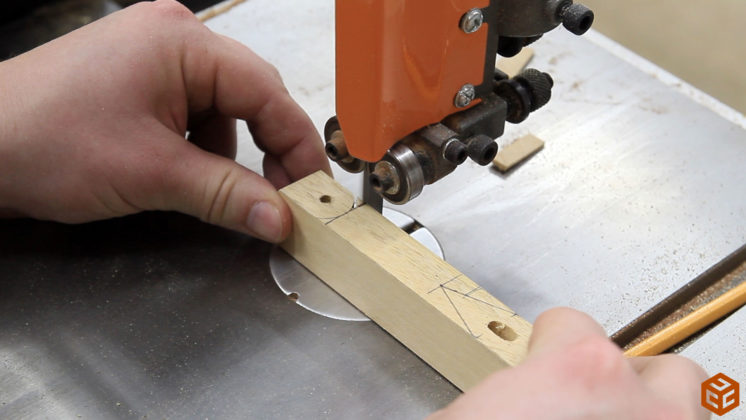 Like I already said, I was using different hardware than what is noted in the plans in the effort of using what I had on hand and not going buying any more. As long as you know what the hardware needs to accomplish you can use whatever you see fit. The indexing pin is nothing more than a flat washer. 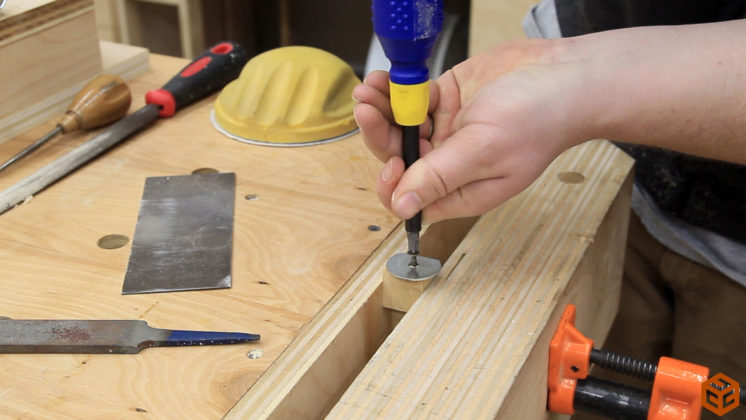 A couple of the small hardwood pieces need to be glued together. 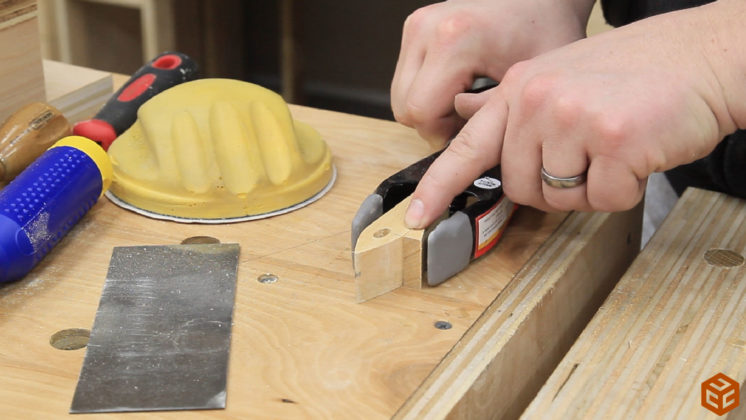 Again, all of the previously drilled holes were perfectly placed to secure the hardwood pieces. 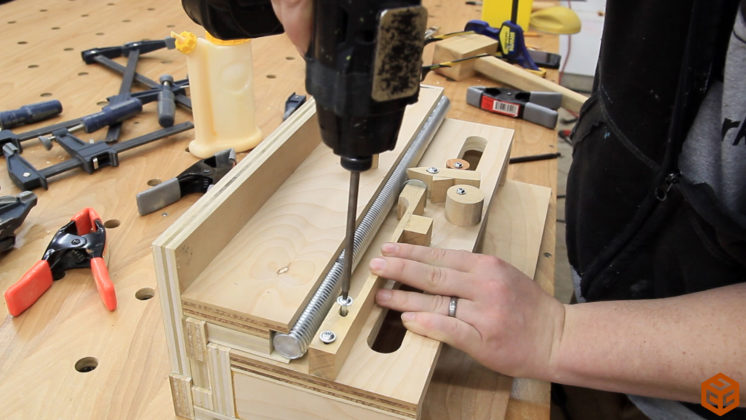 The indexing system is so simple and so brilliant. After securing all the pieces in place I adjusted the cam stops to get a perfect 1/4” advancement. 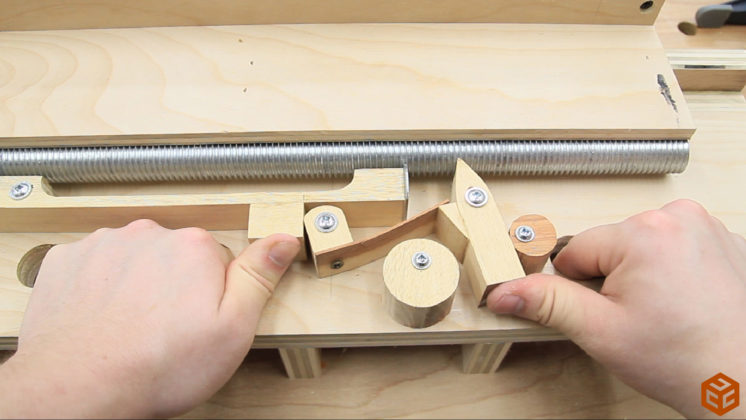 The jig runs in the table saw miter slots so a pair of runners were cut to fit. Then with the carriage in the starting location and the blade just barely touching the vertical reference block the fence can be locked down referencing off the right of the jig. All that’s left to do is glue it to the runners. 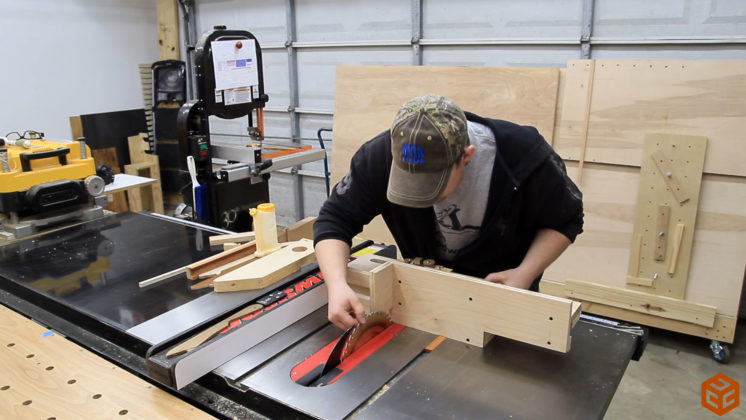 I gave the glue a little bit to cure and carefully reinforced them from the bottom with a few screws. The beauty of this jig is that once it is properly placed in relation to the blade and secured to the runners no more jig setup will be needed. Just as long as you use a full kerf table saw blade you should get pretty consistent results. I tested it by making 1/8” joints and it was dead on with a perfect amount of space to allow the joint to close easily. 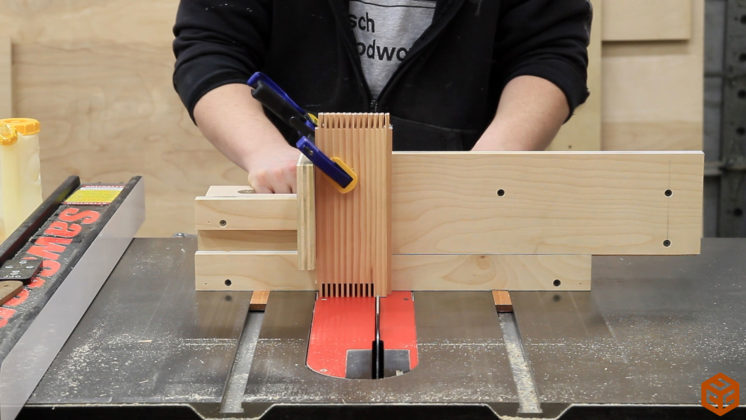 To reduce any confusion and hopefully eliminate any accidental half spacing errors I used a colored marker to highlight every other thread. 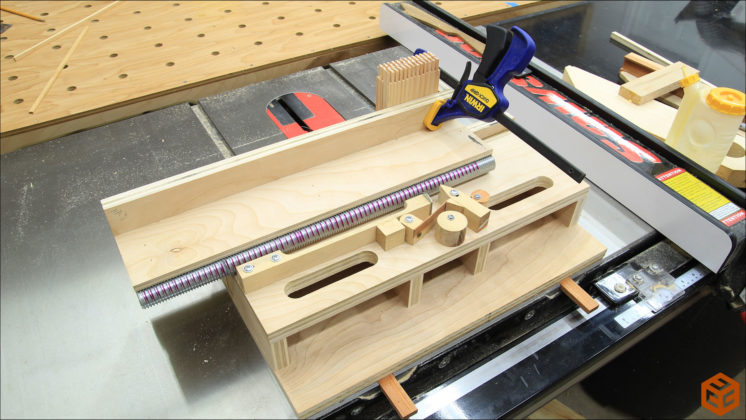 Final thoughts….I’m really, really pleased with this jig. It was easy to build, it’s accurate, allows for a perfect amount of spacing, and because it uses a regular table saw blade (a dado blade can be used if you want) the setup time and use are very convenient and fast. If you would like to build one of these you can purchase the plans here. 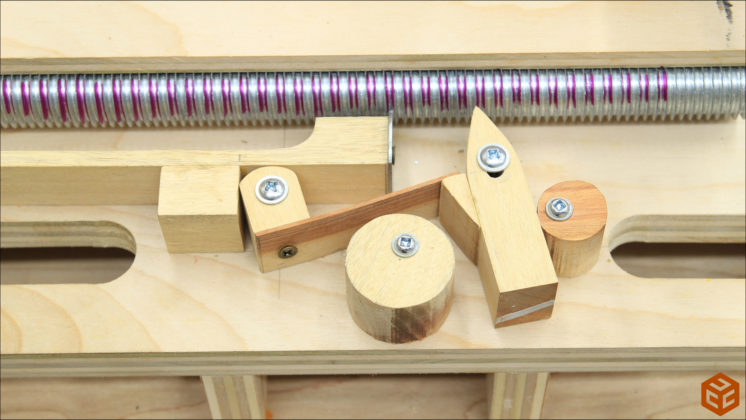 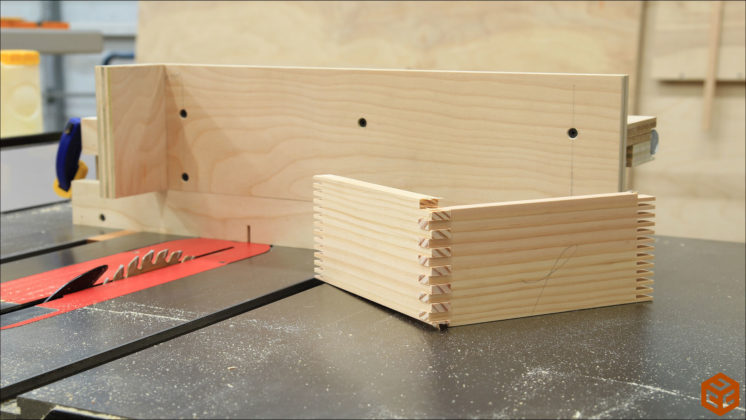 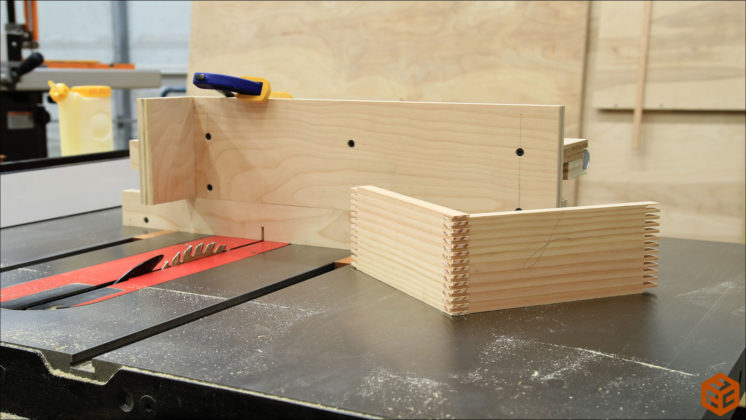