I have a Grizzly G0555LANV 14” bandsaw. My only gripe with purchasing it was the lack of resaw capacity. From the factory it only has 6-3/8” resaw capacity. The least expensive solution to adding resaw capacity is to add a riser block to the bandsaw. This is something I’ve wanted to do for quite some time now but never got around to getting one.

In April, 2016 I attended the Woodworking Shows in Atlanta, GA. While there I was pleasantly surprised with a gift from a viewer which was a riser block for my particular bandsaw. I hate to say it but I honestly forgot the name of the kind gentleman who gave it to me as that whole weekend was a huge whirlwind. However, you know who you are and thank you once again.

Fast forward a month and a two weeks later and I finally got around to installing it. I somewhat put this upgrade off because I thought it would be a little more involved than I wanted. As it turns out, it’s a crazy easy upgrade that didn’t take long at all. Especially considering I had my friend Jeff in the shop with me to help with the install. 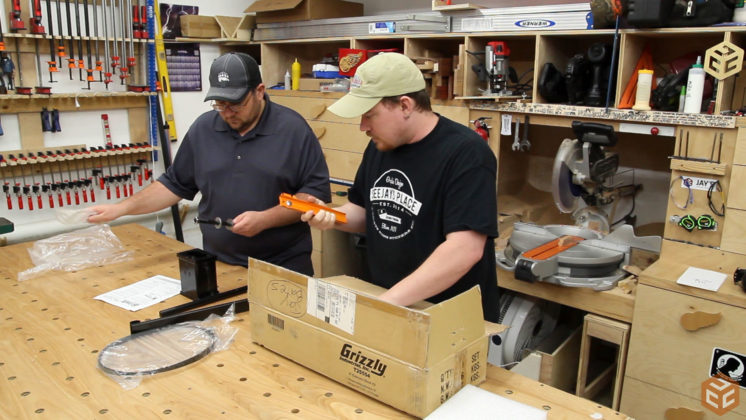 First up is the removal of the old blade. 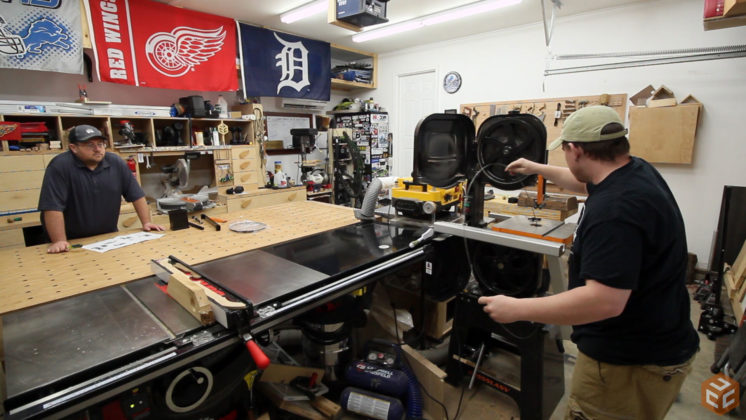 Followed by the left side blade guard. Two screws for this step. 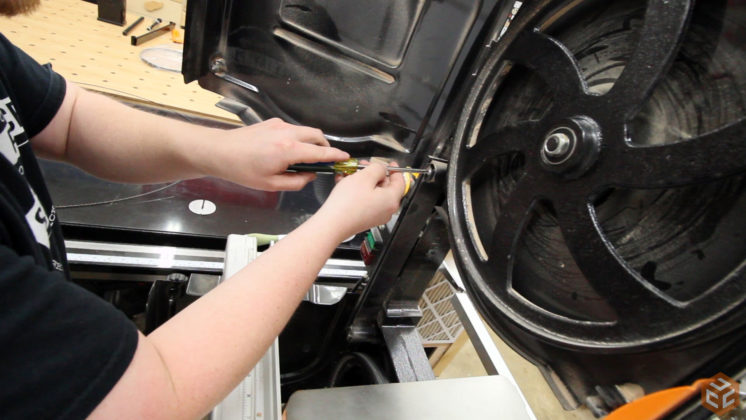 The switch housing also needs to be removed. Two screws top and bottom and one screw holding the wires in place. The switch can be set aside. 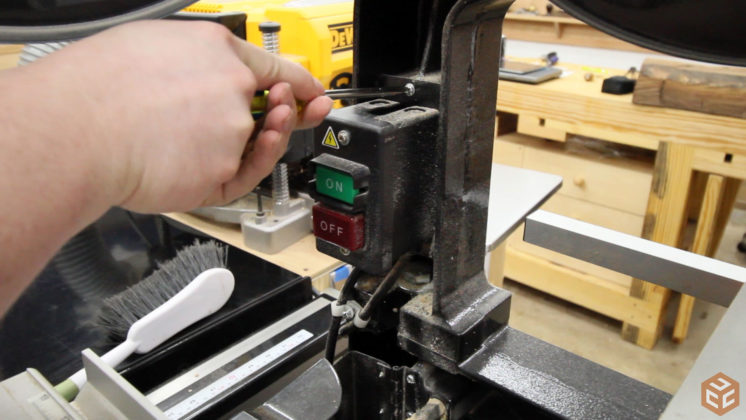 Before unbolting the frame I thought it would be a good idea to lower the blade guard all the way as to act as a leg. This will prevent the upper part of the frame from falling over as the frame bolt is removed.

The frame bolt can now be removed. 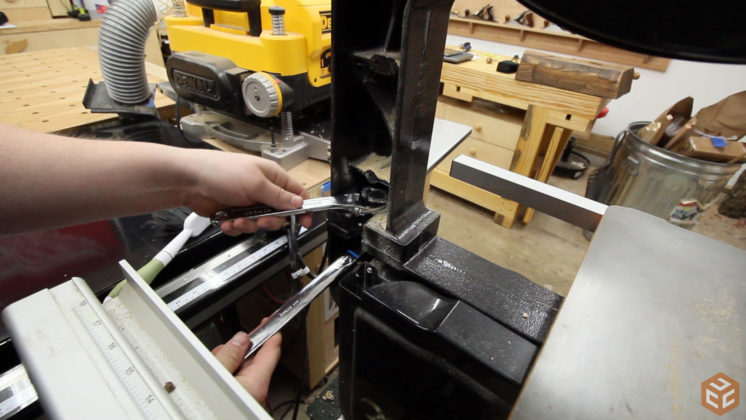 With the frame bolt removed the top half of the frame can be set aside. This was a lot lighter than I thought it was going to be. 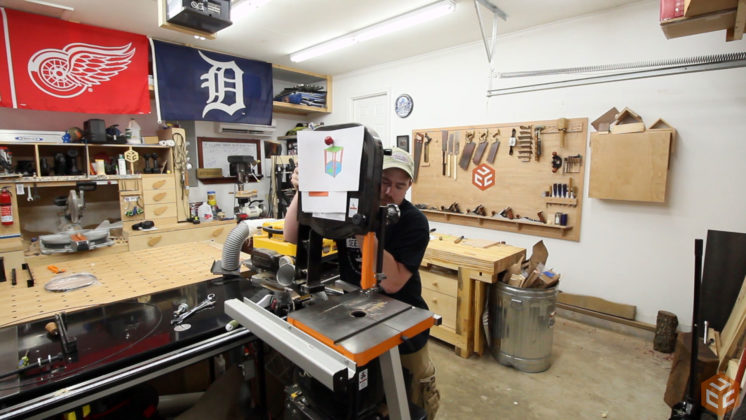 And just that quick we start to reassemble the saw starting with the addition of the actual riser block. This block is about 6” tall so that will give us a final resaw capacity of about 12”. The block has markings to designate the front and back of the saw. 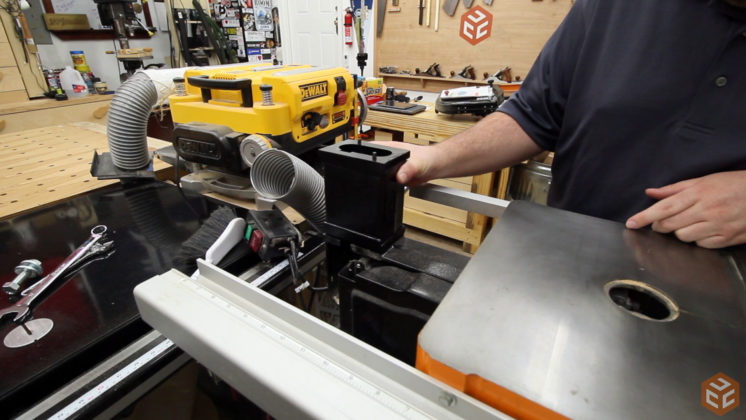 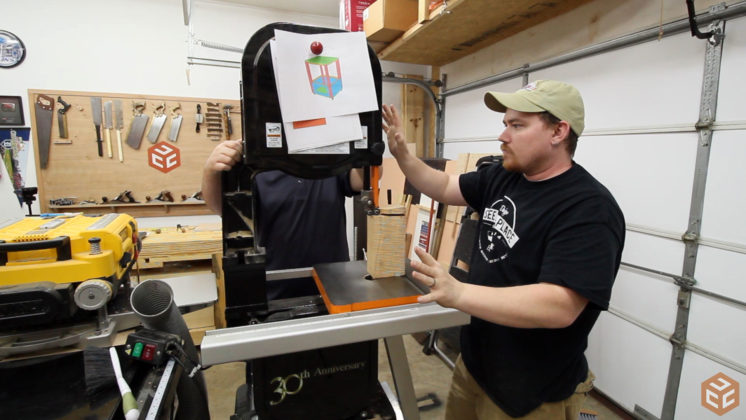 A much longer bolt is used to bolt the frame back together. 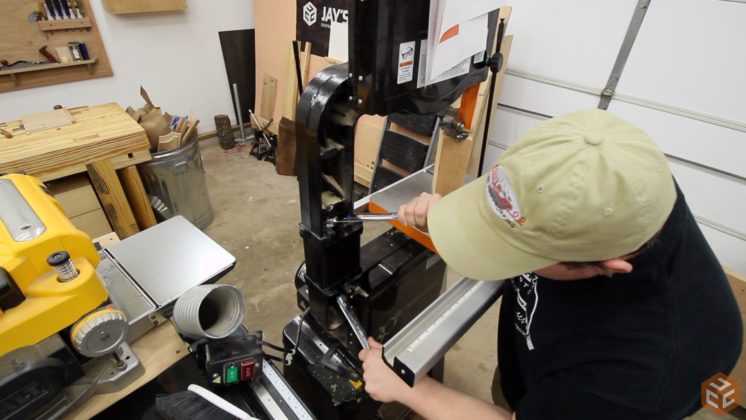 Before the new height adjustment rack can be installed a couple of set screws need to be backed out. 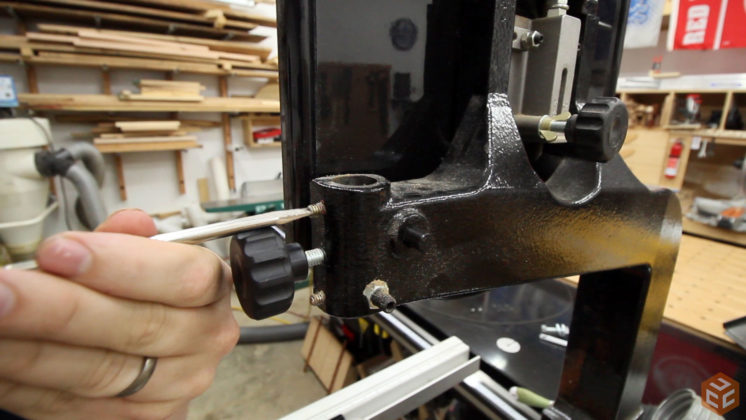 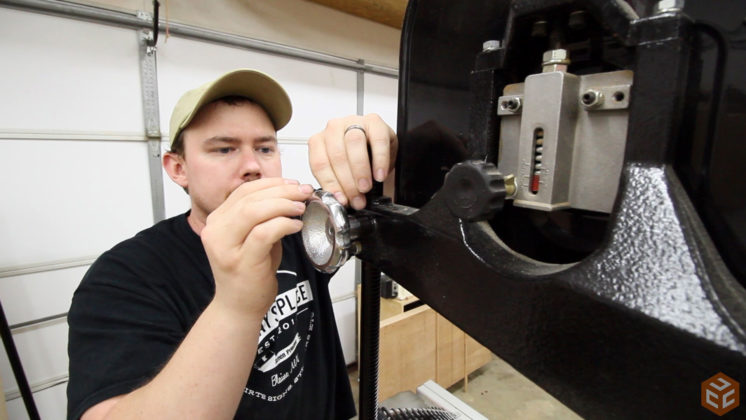 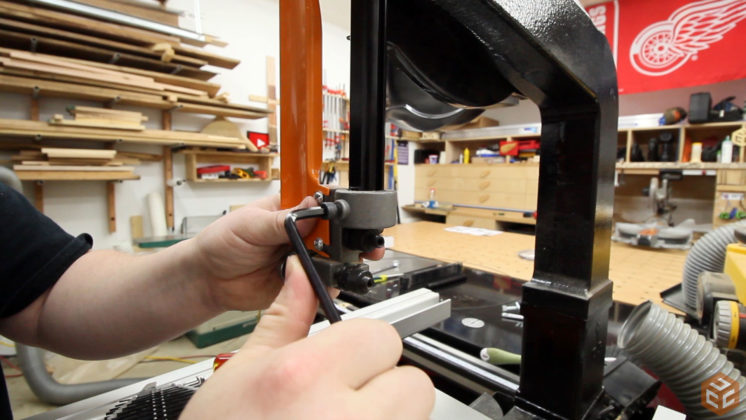 Because we are gaining 6” of resaw capacity a longer blade guard is needed. Instead of being one piece this one is adjustable to fit inside the upper wheel door when taller cuts are made. 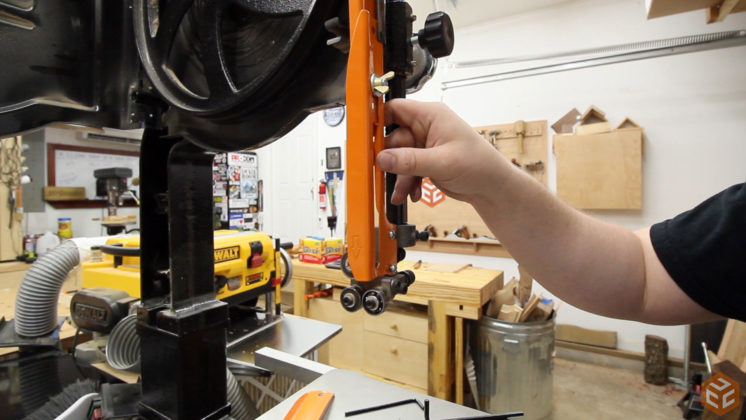 The rest of the process is in reverse order. The switch box is mounted in the same location. 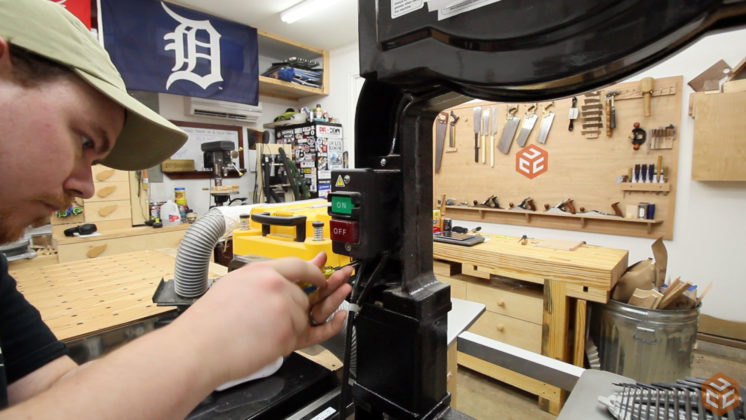 Followed by a longer left side blade guard. 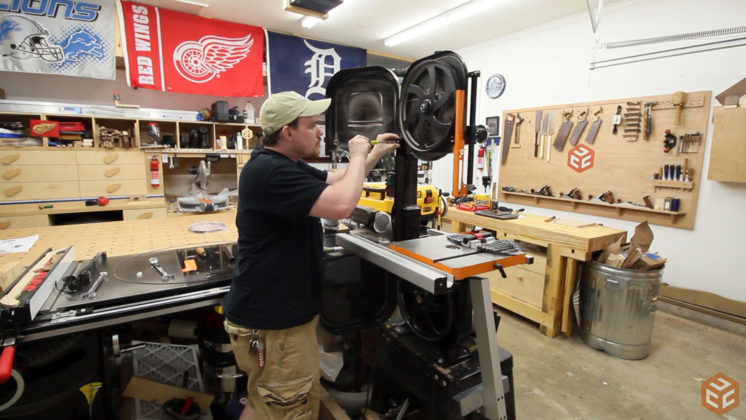 The kit comes with a new blade that is 105” long. This also means that Jeff left with all of my 93-1/2” bandsaw blades for use on his saw. With the new blade installed and everything properly adjusted I had to try it out. The widest piece of scrap I could find was a piece of 2×10 pine. At 9-1/4” wide it’s not max capacity for this upgrade but it is 3” wider than anything I’ve ever cut on this saw. 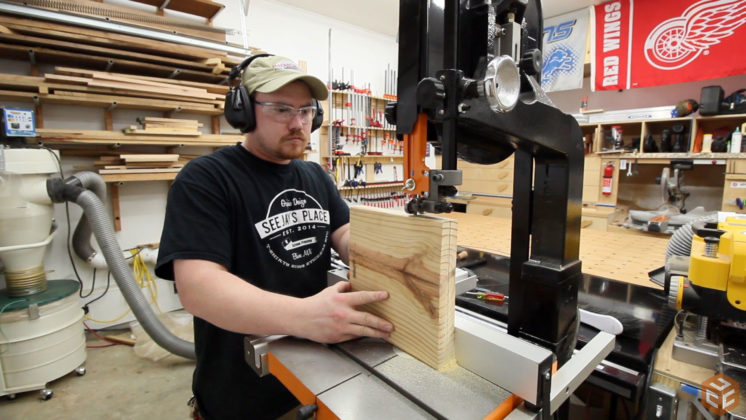 In conclusion, adding a riser block to my Grizzly G0555LANV bandsaw was incredibly easy to do. It didn’t take long at all and I should have done it sooner. 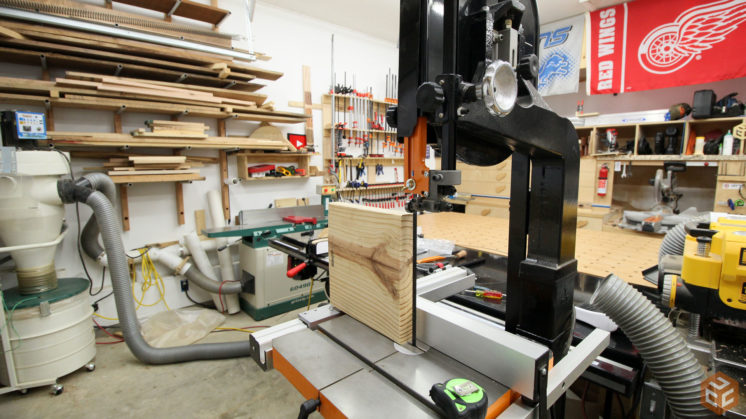 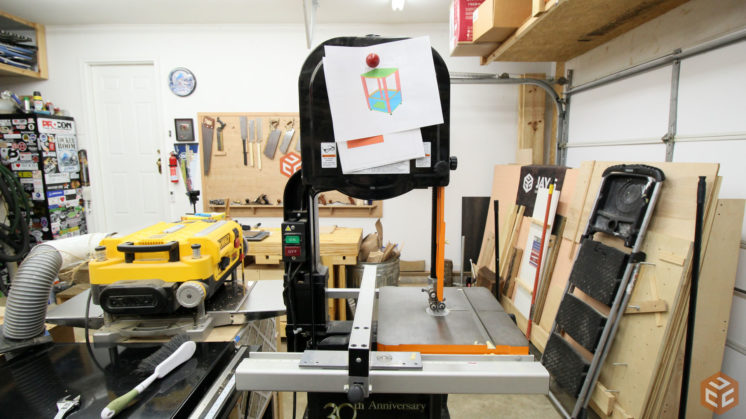 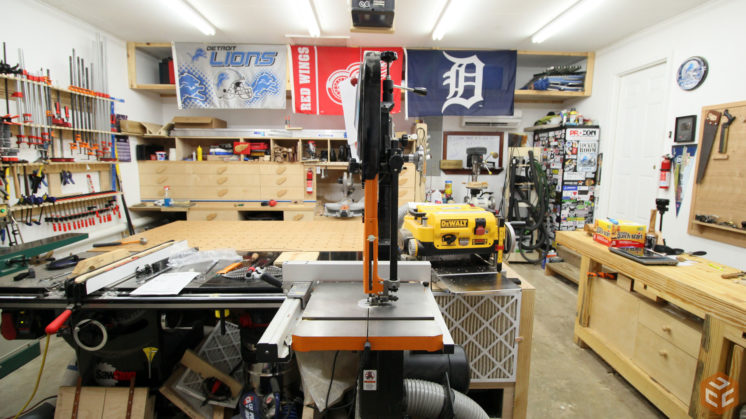 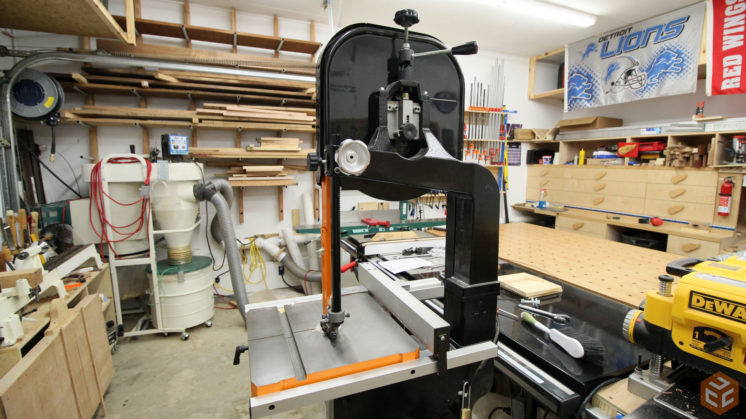