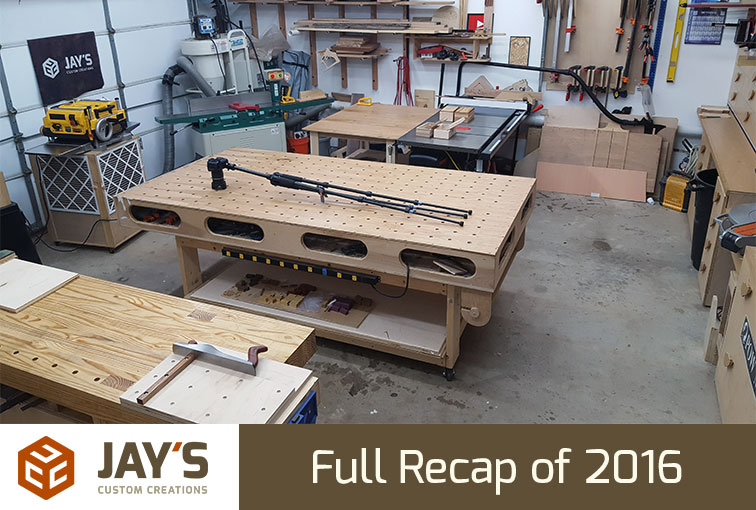 I can’t do what I do without all of you watching and interacting with my content. And of course if I don’t produce the content then you wouldn’t be watching it. So it’s like we’re a team. You and I. You being a part of this team has allowed me to evolve my woodworking hobby into a full-time career that I’m not only proud of but also continuously excited to expand and grow going forward. So for that I say THANK YOU! Lets take a look back at 2016, shall we?

The first thing I think of with woodworking in 2016 is my workbench. A workbench is sometimes seen as the “right of passage” for woodworkers as it’s a foundation tool that entire shops, workflows, or tool selection can be based upon. Since starting woodworking again in 2011 I knew I wanted to build a workbench but never put forth the effort to either buy or build one. The timing just wasn’t right and I didn’t have a set shop location for the future. As I neared the end of 2015 I set aside some time to design and get the workbench complete and started 2016 off with the workbench build. The design I went with was simple but utilized traditional, strong joinery.

What I didn’t anticipate happening was how much the workbench opened my eyes to hand tool woodworking. Having a solid surface that doesn’t wiggle when you plane a board or flop around as you chop with a mallet and chisel is a game changer. As the year progressed I found myself incorporating more hand tools into my workflow not as a way to “become one with the wood” or because “that’s how true craftsman work” but rather because I found more and more situations where a well tuned hand tool was actually the best tool for the task.

I did a lot of collaborations with other online content creators in 2016.

I traveled a lot in 2016. More so than any other year I can remember. I hope to do a lot less of it in 2017 though. Traveling is a really great way to derail momentum and alter schedules.

Nick Ferry, April Wilkerson, and myself started The Woodworking Podcast in early 2016. It started out as a bi-weekly recording that transitioned into a weekly recording. We still occasionally miss a week here and there due to scheduling conflicts but are really enjoying the progress so far. We try to release late on Thursdays or early on Fridays. If you haven’t already, be sure to check it out!

My Personal Top 5 Favorite Projects of 2016

The Business Side of Jays Custom Creations

As you may or may not know, Jays Custom Creations is my full-time business. I’m not a “woodworker” by profession but rather a “content creator.” I create videos, articles, and plans for my website for a living. The subject of which is woodworking. This often raises the question of “How do you make money?” Basically, it’s marketing. Advertisements on the YouTube video platform, advertisements on this website, affiliate links with Amazon, an occasional sale of shirts or stickers, and plan sales are how I am able to provide for my family and call this my full-time job.

A lot of people have the misconception that anyone who uploads videos to YouTube is getting rich from sponsorships or paid promotions. That couldn’t be further from the truth. In 2016 I did not have a single paid sponsorship agreement with any company. I’ve had a few free products sent my way in 2016 but that doesn’t help pay the bills. 100% of my 2016 income has been from the content that I created and not from any kind of promotional situation. I’m not opposed to or think less of those who do accept sponsorship situations though. As I’m reading this over I think that this paragraph might come across as arrogant, cocky, or defensive. I hope that it doesn’t. I mainly brought it up as a way of being transparent with you and also show that sponsorships aren’t the only way to grow an online business.

So looking forward to 2017 and how to proceed…. As with any business, the objective is to make a profit and continuously grow the business. As I look back on 2016 I’ve noticed that creating content that is best described as “entertainment for YouTube” has helped my business the least amount and creating content that aligns more with “information and products” has helped my business the most. So does that mean a drastic change for my content in 2017? Probably not. But I really doubt I’ll be sticking to a weekly release schedule for much longer. Instead, I’d like to focus on more of the information and instruction side of how my content is presented.

On a personal note, I had nose surgery on December 29th and am currently a little loopy from pain pills while writing this article. I’m recovering fine but I think the surgery will keep me out of the shop for at least the first week of 2017. So I’m not sure when I’ll publish something next but until then, have a great start to your 2017 and Happy New Year!