As you may or may not know, I had nose surgery right at the end of 2016. I had a deviated septum and a bunch of sinus issues that have developed over the past several years. While it is safe to say that woodworking dust wasn’t catalyst that directly caused the need for surgery I found out during the process that I’m allergic to a lot of different things, including “oak”. That explains why cutting certain woods in the shop make the next 24 hours pretty miserable in regards to breathing through my nose. On a positive note, since the surgery I’ve pushed the boundaries a little bit here and there just to see how I respond to the dust and so far it seems to affect me much less than before. It’s also worth noting that I’m taking allergy immunization shots which should be lessening the reactions over time.

Dealing with the sinus and allergy issues over the past year or so has told me a lot about the air quality in my shop. I already had a couple systems in place with a HEPA rated dust collector and a air cleaner cart. And while I always used the dust collector for every cut I still had dust everywhere. That led me to doing a lot of research on wood dust and the dangers it poses to our health. Even beyond the relatively small allergy problems I was having wood dust can cause some major respiratory problems as well as cancer. During my research I read through all of Bill Pentz documentation. He’s got a great wealth of information on his website. If you haven’t already be sure to check it out.

I realized that the weakest link in regards to dust in my shop was capturing it at the source. Right where the dust is produced. So I decided to upgrade to my “forever” dust collector that is capable of moving a lot more air and also upgrade the dust collection ducting in my shop to be more efficient in design as well as accommodate the much greater air flow. The dust collector I decided on was the Clear Vue CV1800 Cyclone Bundle. The motor is much larger at 5hp and therefore the rated CFM is double that of my last unit. And because the CV1800 is wall mounted it should actually provide a little more open floor space than my last setup.

I did some prep work before installation. The filters arrived a few days prior to the cyclone and I picked up a 55 gallon barrel to use as the dust bin. Using those and the dimensioned diagram I printed off Clear Vue’s website I was able to determine the exact location I wanted to mount the unit on the wall. In my situation I wanted the cyclone close to the ceiling and as far into the corner as possible. This will result in the best starting point for the dust collection piping. The main benefit of predetermining the cyclone placement is that I was able to determine the correct placement of the electrical box and mount it to the wall. The electrical box needs to be a certain distance away from the motor, have a hard line connection to 240v electricity, and be close enough to be plugged into a 120v receptacle. 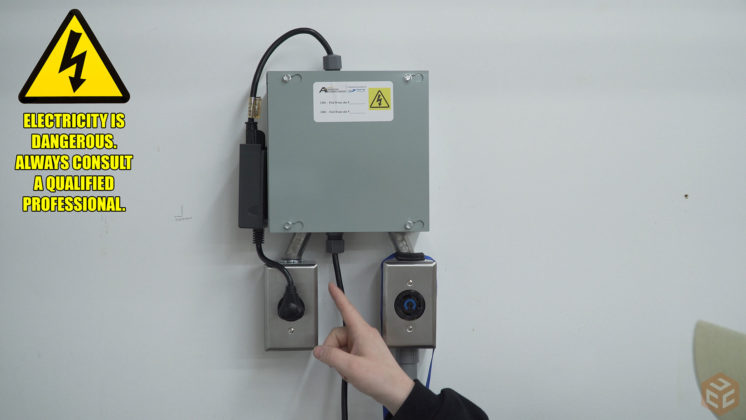 Right off the bat I owe a huge thanks to Wayne Brown for helping me with the installation. I think installing the dust collector on an open wall with no restrictions would have been pretty easy but due to both my garage door rail and my over the door storage shelves being in the way my installation was a little tricky. It’s off topic but I shot a mini documentary featuring Wayne’s story on my second channel. Be sure to check it out when you’re done with this article and video.

So the first order of business was the mounting bracket. Each arm of the bracket is assembled with two bolts and then each arm can slide onto the main cleat that is mounted to the wall. This allows a bit of adjustment once the main cleat is mounted. 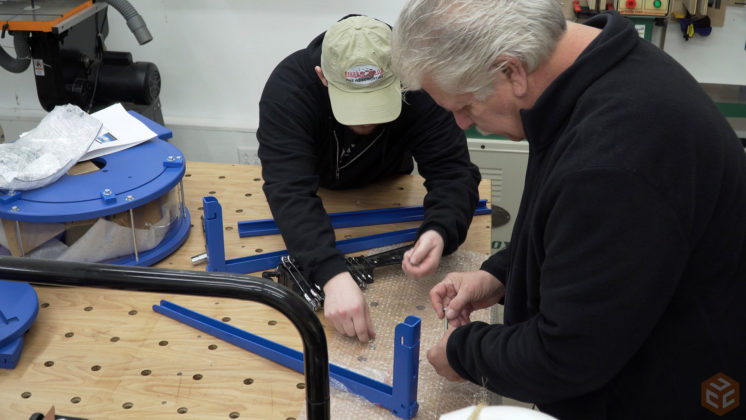 I wasn’t exactly sure how high to install the wall mount bracket so we skipped ahead to assembling the motor/impeller assembly. The construction process went by pretty quick. Basically just following the instructions. So here we had a few pieces of threaded rod, some flat washers, some lock washers, some hex nuts, and some bushings are stacked up strategically to hold everything together. 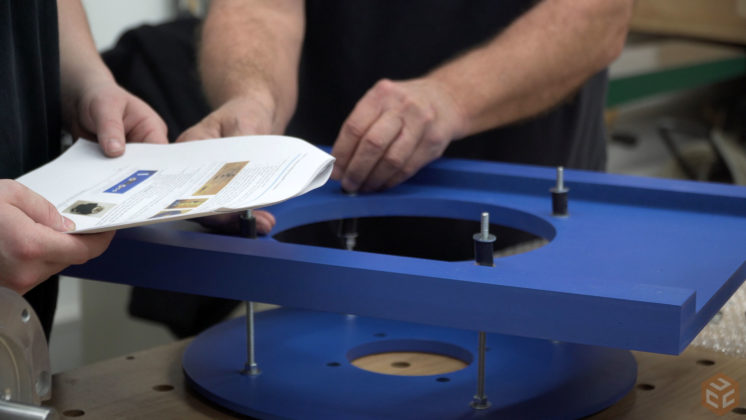 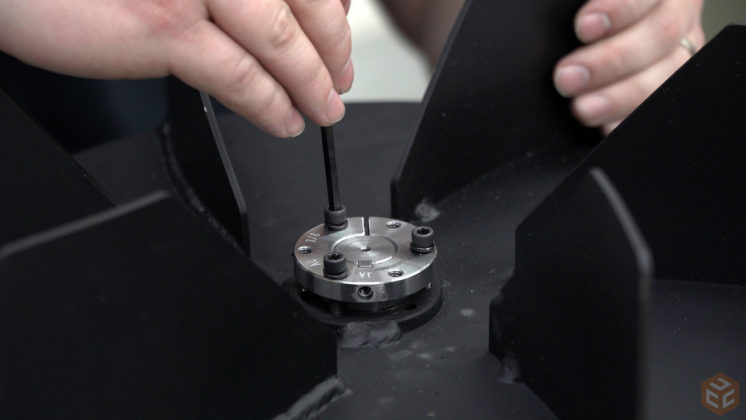 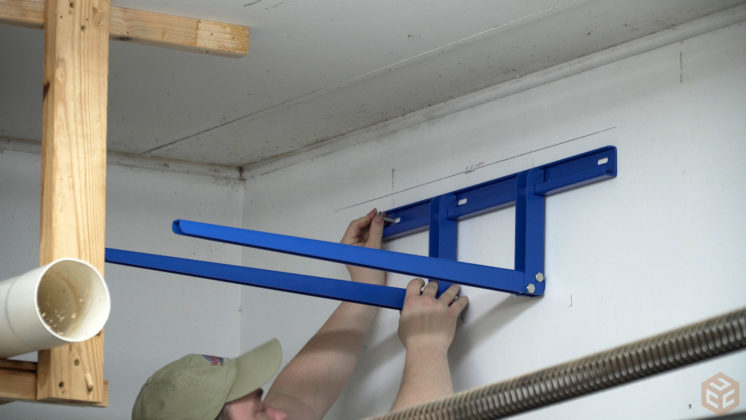 The garage door rails and the over garage door storage shelf were in the way for mounting the motor/impeller assembly on the brackets. We ended up having to remove one of the mounting arms, slide the motor assembly in place, and then replace the second mounting arm. This would have been a lot easier if the collector was mounted on a section of wall clear of obstructions. But in the end we got it and we also wired the motor before installation as well. 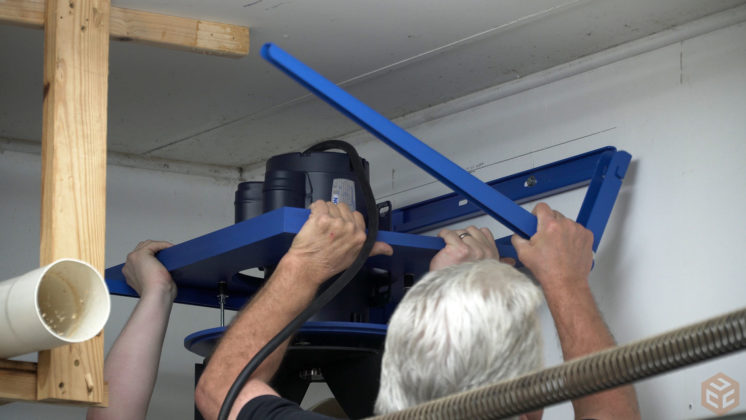 Next up was the transition and blower housing which is just following instructions and general assembly stuff. Nothing difficult. However, I did do a few things out of order. I was supposed to start sealing all of the seams on the transition before attaching it to the blower housing so I did have to backtrack a little bit. 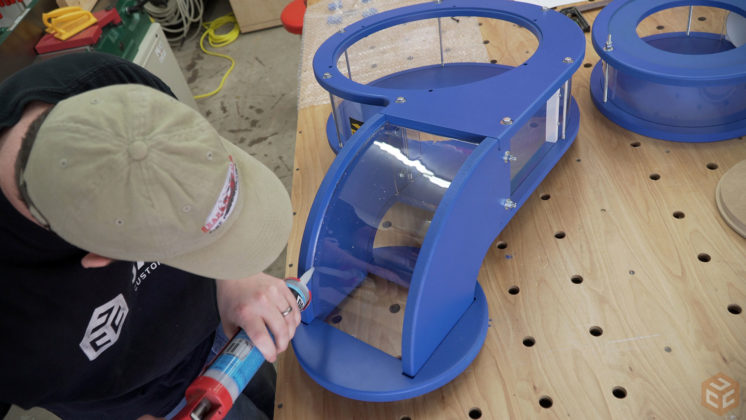 After all of the seams on the blower housing have been sealed off the cyclone itself can be added and then sealed off as well. 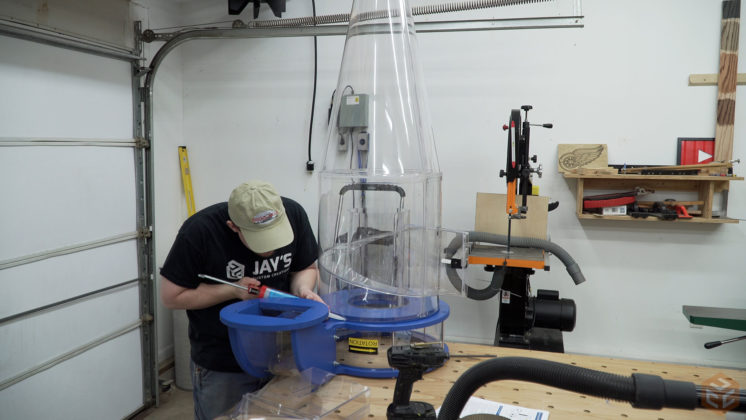 The filters get stacked and are secured to one another with a bead of clear silicone and a band clamp. 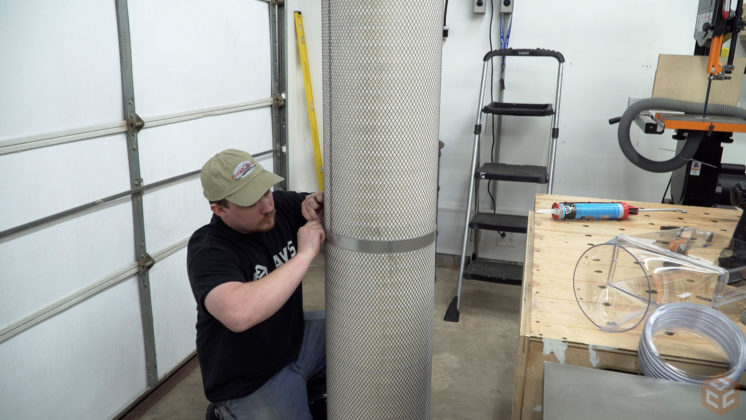 For some reason I totally forgot to pick up some foil tape so Wayne ran to the store to get some real quick. I decided to install the cyclone while he was gone which wasn’t as bad as I thought it would be. I made sure to start the two clips closest to me so I could hook them over the top of the motor mount. Then very carefully add the rest of the clips and tighten everything down. 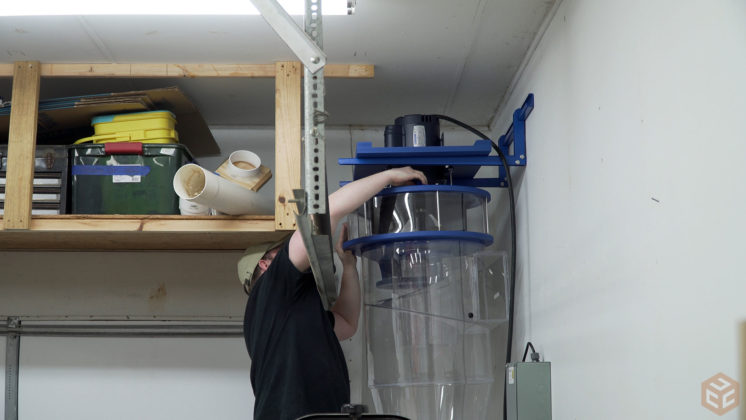 The kit I got came with a clean out box but the instructions show you how to make your own if you don’t want to buy one. It gets secured to the bottom of the filter stack with silicone. And while I had the silicone handy I went ahead and installed the intake transition and sealed it as well. 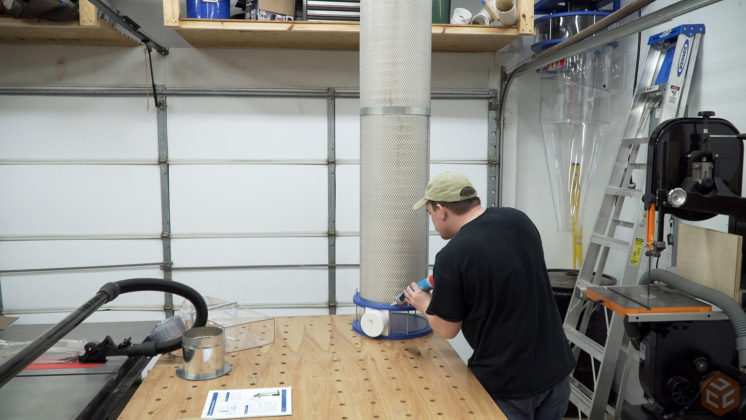 Because I mounted the unit higher than normal I had to make a small table to support the weight of the filter stack from below. I got really lucky with this because I had an old odd shaped stool in my shop that I never used so I just cut it down to fit. And the top was secured with a couple screws and then sealed off with foil tape. It was a bit of a tight fit. 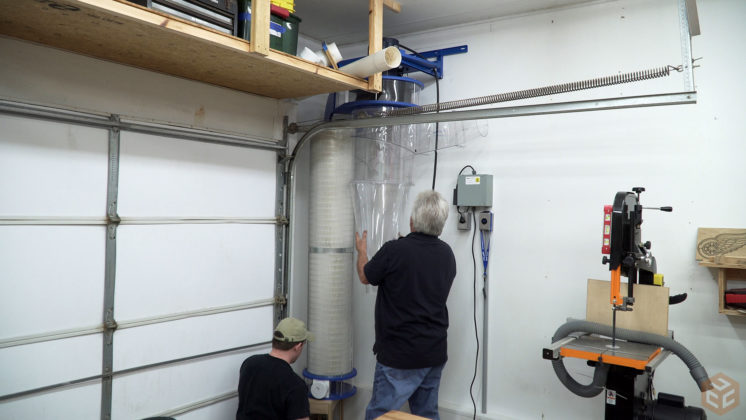 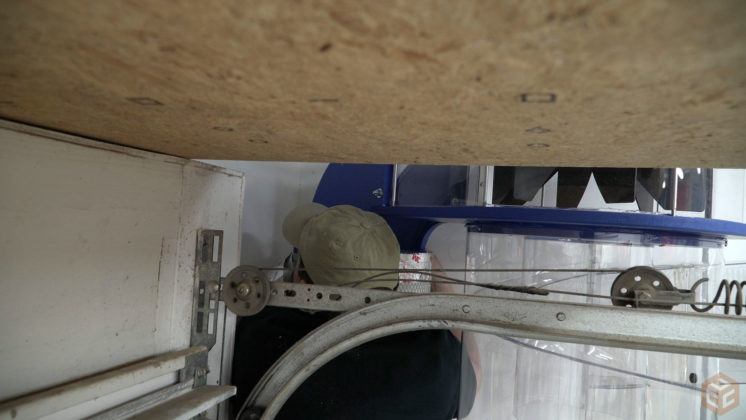 I got a little impatient with the dust bin and didn’t record cutting the hole. I just used a jigsaw for the hole and then added a 6” HVAC Take Off. It has a padded adhesive to better seal to whatever surface you put it on and also a couple screw holes to lock it down. I also went back with some more silicone around the entire take off just for good measure. 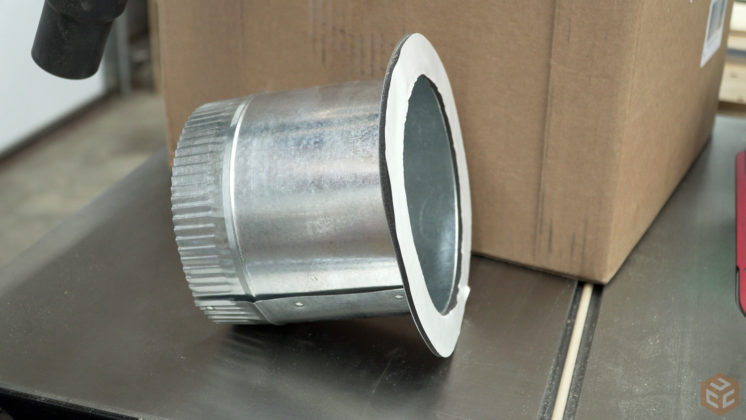 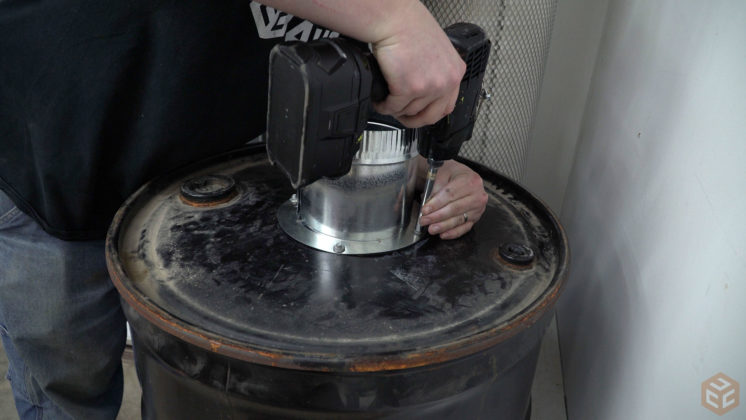 After turning it on for the first time I realized I had the motor wired to spin in the wrong direction. Here’s the wiring diagram on the back side of the electrical cover on the motor. It gives instructions for both clockwise and counterclockwise rotation so I guess I determined rotation from the wrong end. Basically, I wired the motor exactly like the diagram shows and I should have wired it incorporating the reversing instructions below the diagram. By the way, laying across the storage shelf to reverse the motor was actually really easy and it only took me a minute or two to do. 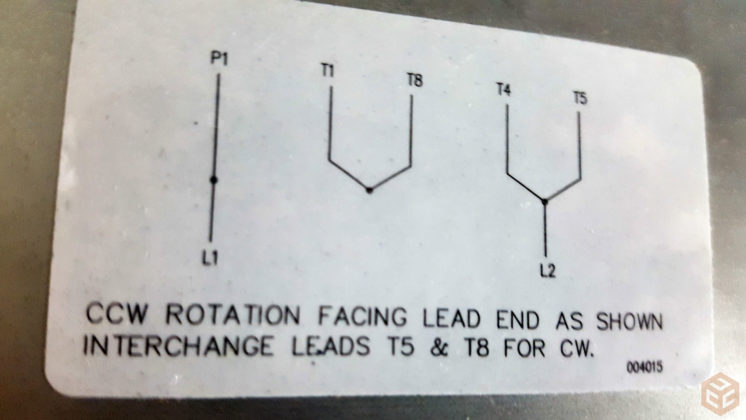 When it’s all said and done, installation only took about five working hours with the help of someone else. I’m not sure how much different the installation time would have been on an unobstructed wall and without the added time of recording the process but overall it wasn’t bad. 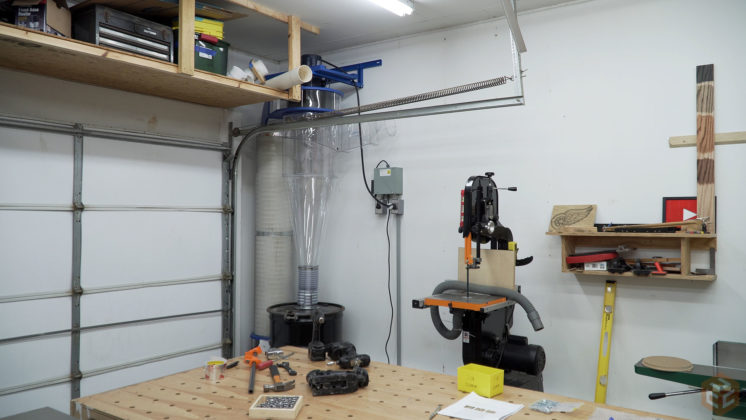 In the next article/video I’ll cover the ducting to connect the dust collector to the tools. SPOILER ALERT: This dust collector is a BEAST. It is so much more powerful than my last setup. Be sure to subscribe to my email notification list so you don’t miss anything. 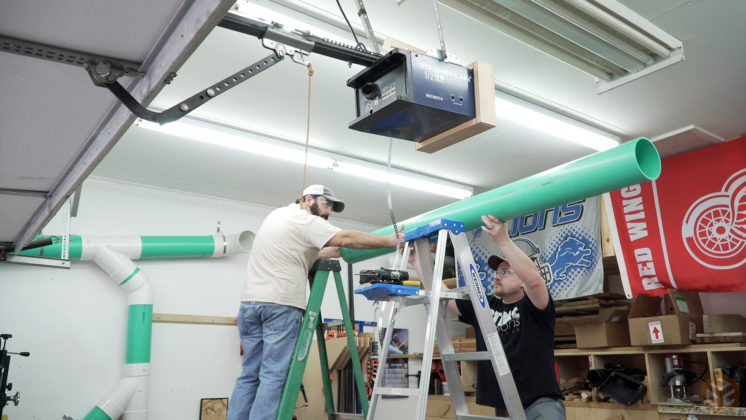 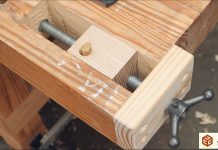